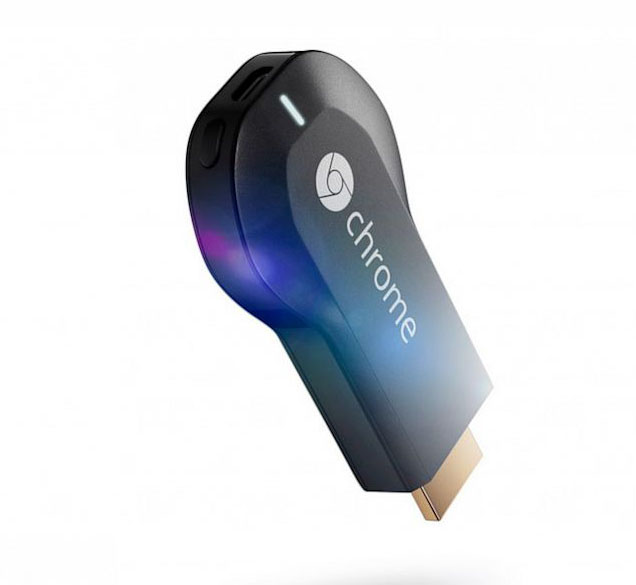 For 35 bucks, I couldn’t resist. Because, hello? It’s a gadget; a gadget for your TV that talks to your smartphone, computer or tablet.

The only thing is the wait – back orders since its July release and whatnot – but my wait is over. I have my Google Chromecast.

Google Chromecast is the latest workaround to time-constrained television viewing and the wallet-grip of cable TV. But really, the stick-like device – which looks like and is similar in size to a thumb drive – is competing against AppleTV and the Roku streaming media devices.

Chromecast undercuts its competitors on price, but short-sells in its offerings – so far. Here’s how it works:

The Chromecast device slips into any available HDMI port on your TV (yes, you have to have one of those for Chromecast, but they’re apparently not in short supply. Google estimates there are 600 million TVs worldwide that have the port). Chromecast is powered by a spare USB connection on your TV or an electric socket adaptor (they’re included in the 4 -by- 4 box that you receive).

(An aside: Google borrowed heavily from Apple in the elegant packaging Chromecast is nested in; as with your first iPod, opening Chromecast’s box is like opening a swanky birthday gift.)

You’ll also have to have a solid Wi-Fi connection to your smartphone, computer or tablet. This is how the devices talk to each other.

Google walks you through the setup, which starts with your TV then turns to your wireless device. After some downloading – the Chromecast app – software updates, which Google warns may take some time, you’re eventually connected.

From there, you’re watching online video, via YouTube (owned by Google), Netflix, Hulu, Google Play Music, Google Play Video and more recently, Hulu Plus. (HBO Go and Pandora are Chromecast promises). And realize: You are paying more for Netflix and Hulu Plus, which is also a subscription service.

You can also mirror your device to your TV to look at your laptop on a big screen.

But here’s the rub: Chromecast is still in beta stages. It doesn’t offer as much as AppleTV or Roku, as far as wireless streaming goes. Other than talking to your computer or smartphone, Google isn’t receiving outside signals, like AppleTV or Roku. It’s simply taking limited applications from your laptop, wirelessly.

But for being dumb, it’s cheap and easy. Google’s setup and tutorial will show you the icon you click on when you’re in Netflix or YouTube on your computer so you can link it to Chromecast on your TV.

An Apple warning: Google isn’t playing entirely nice with Apple devices. I couldn’t connect it to my iPad – that’s supposed to get smoother later – so I had to rely on my MacBook (it took me a while and some research to figure this out). And it doesn’t play with Apple’s Safari Web browser. You have to switch over to Google’s Chrome browser to mirror your device (that’s OK; I sometimes use Chrome instead of Safari, though rarely).

So what’s the what? If you have Netflix, you already have a connection on your TV to the streaming service. Chromecast won’t be a bonus, unless it’s used on, say, another TV in your house. But I do like it as an option for streaming.

And here’s why it’s more than just another gadget and how it’s relevant in today’s TV world: The more programming that devices including Chromecast and AppleTV offer, the more they’re taking away from network TV and its dependency on viewers locked into prime time. Remember when Netflix was just a DVD or streaming service. It’s got it’s own original programming, now. I can see Google, perhaps via its YouTube service, going in that direction, as well.

This has an impact on the entire landscape of television. You can say you were part of the revolution.

TV Trend: Series Story Arcs
Like Everyone Else, Programmers Have No Patience
To Top