New Times reporter Matt Michael recently caught up with Hill at NBT Bank Stadium to ask him about Auburn, his special 2014 season and – dare we say it – helping the Chiefs make the playoffs.

There are many reasons why the Syracuse Chiefs are in contention for their first playoff appearance since 1998, but none bigger than pitcher Taylor Hill.

Hill, a 6-foot-3, 230-pound right-hander, has emerged as the ace of the Chiefs’ pitching staff as he ranked among the International League leaders with eight wins and a 1.75 earned run average after his first 12 starts. In fact, Hill could be in line to be the IL’s starting pitcher for the Triple-A All-Star Game July 16 in Durham, N.C.

Born in Old Hickory, Tenn., Hill was the Tennessee High School Player of the Year in 2007 before playing at Vanderbilt University, where he was a teammate of Pittsburgh Pirates slugger Pedro Alvarez. Selected by the Washington Nationals in the sixth round of the 2011 amateur draft, Hill started his professional career with the Single-A Auburn Doubledays and reached Triple-A Syracuse for two starts last season.

New Times reporter Matt Michael recently caught up with Hill at NBT Bank Stadium to ask him about Auburn, his special 2014 season and – dare we say it – helping the Chiefs make the playoffs. 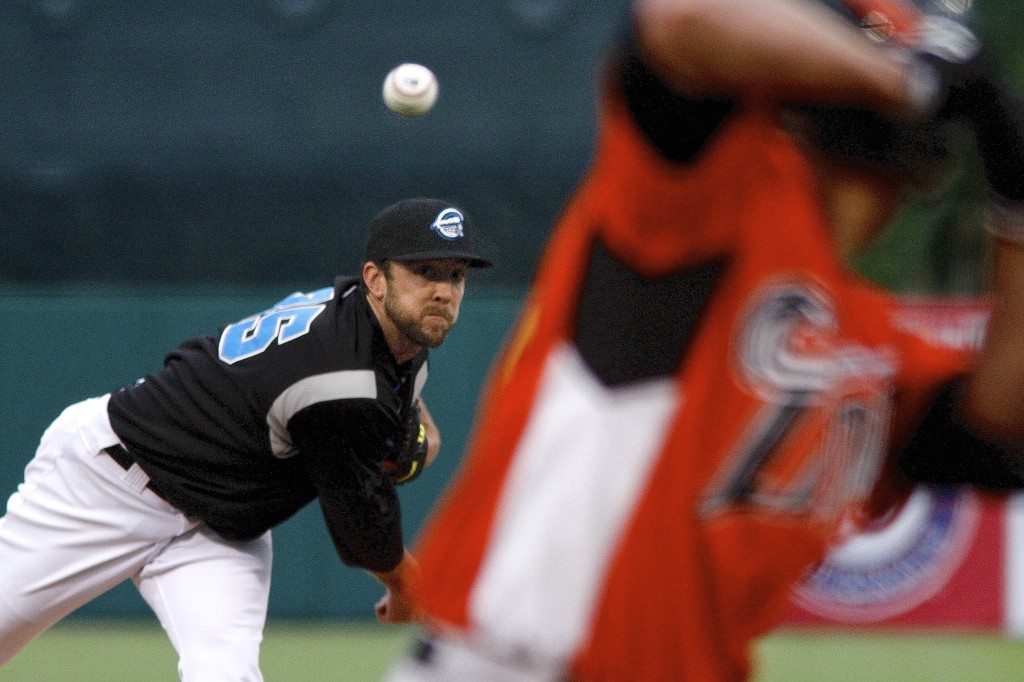 MM: Your given first name is David. Why do you use Taylor?

TH: David is my dad’s name, but he didn’t want me to be a junior. I actually talked to him about that a couple of months ago. Why do I go by Taylor if it’s my middle name? Why wasn’t it just Taylor and then something else? And he said, “We really like the ring of David Taylor, but looking back it probably makes more sense to make your first name Taylor and then something else. But there’s no way we’re going to make you a junior!”

MM: Growing up in Tennessee, was it all baseball or did you play other sports?

TH: I played baseball and basketball. I quit basketball after my eighth-grade year. I wasn’t very good, to be honest. I enjoyed playing defense more than anything. Defense and rebounding, but I wasn’t very good and I loved baseball, too, so I wanted to focus on that. It ended up working out a lot better that way.

MM: You were picked by the Cleveland Indians in the 10th round of the 2010 draft, after your junior year at Vanderbilt. Why didn’t you sign with the Indians?

TH: There was always a chance I would, but it didn’t work out in the end. I knew my arm needed a break and I knew how good our team (at Vanderbilt) was going to be that following year. I knew if I went back, I would still be able to pitch and graduate. I wasn’t going to have to worry about going back to school if I didn’t sign.

I lived so close to Vanderbilt, I was able to go back and work on some stuff with the pitching coach that I wouldn’t have been able to work on had I signed or had I played summer ball. It worked out a lot better, just getting stronger and being able to get away from it, too. I didn’t pick up a baseball for two months (after his junior season). I was able to go on vacation with my family in the summer, which had never happened, so it was a good opportunity to get away from it and when it started back up to really focus in and figure some things out.

MM: What was your major at Vanderbilt?

MM: So if you weren’t playing professional baseball, what would you be doing?

TH: (Laughing) I have no idea. Hopefully I won’t have to worry about that for a little while.

MM: What was it like playing in Auburn after you signed with the Nationals?

TH: It was great. Our team was really good. Obviously that was when I first signed and I didn’t really know what to expect. You hear all these things, but you really need to experience it on your own. We lost in the championship that year to the (Staten Island) Yankees, but it was fun and I was able to go up and pitch and went to instructs (the instructional league) after that. Auburn was great, it’s a nice little town and we always had some pretty good crowds there, too.

MM: Last year was your big jump, from Single-A Potomac to Triple-A Syracuse in the same year. What was the key for you? 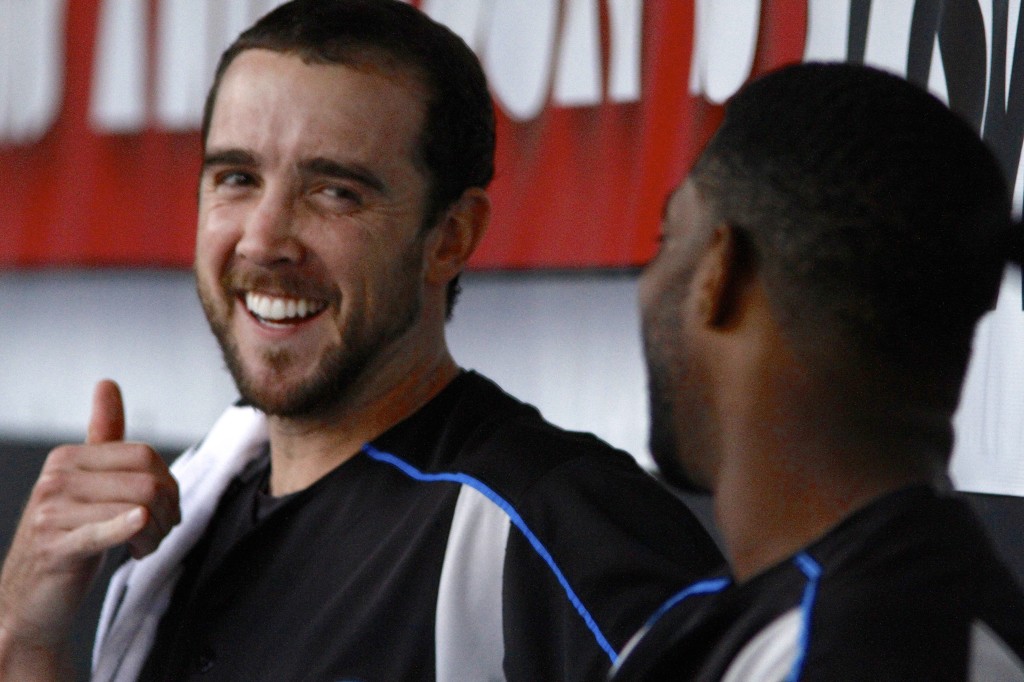 MM: You’re the kind of pitcher who pitches to contact, meaning you’re not going to rack up the strikeouts but you’ll get outs and pitch deep into games.

TH: I know I’m not going to go out there and strike 10 guys out; that’s not my deal and that’s fine. Strikeouts are great and in certain moments they’re big. But at the same time, I’d much rather have a double play ball than worry about striking someone out. I’d rather give up a hit than walk anyone any day of the week.

I want to pitch as deep as I can, and obviously the deeper I’m pitching I must be doing something right. I want to be able to keep my team in the game and keep us within reach and give our hitters a chance.

MM: You recently had an off day in the middle of a home stand. What do you do when you get a day off in Syracuse?

TH: (Laughing) A lot of sleep. I went to a movie (“Edge of Tomorrow”) with Souza and Howell (teammates Steven Souza and Jeff Howell) and we went to eat at the mall. We had dinner there and after that I kind of went back and relaxed. I didn’t really do a whole lot, honestly. Plus it was kind of dreary out. I thought about golfing, but I wanted to give my body a break.

MM: Back to baseball. What has made this team special so far? 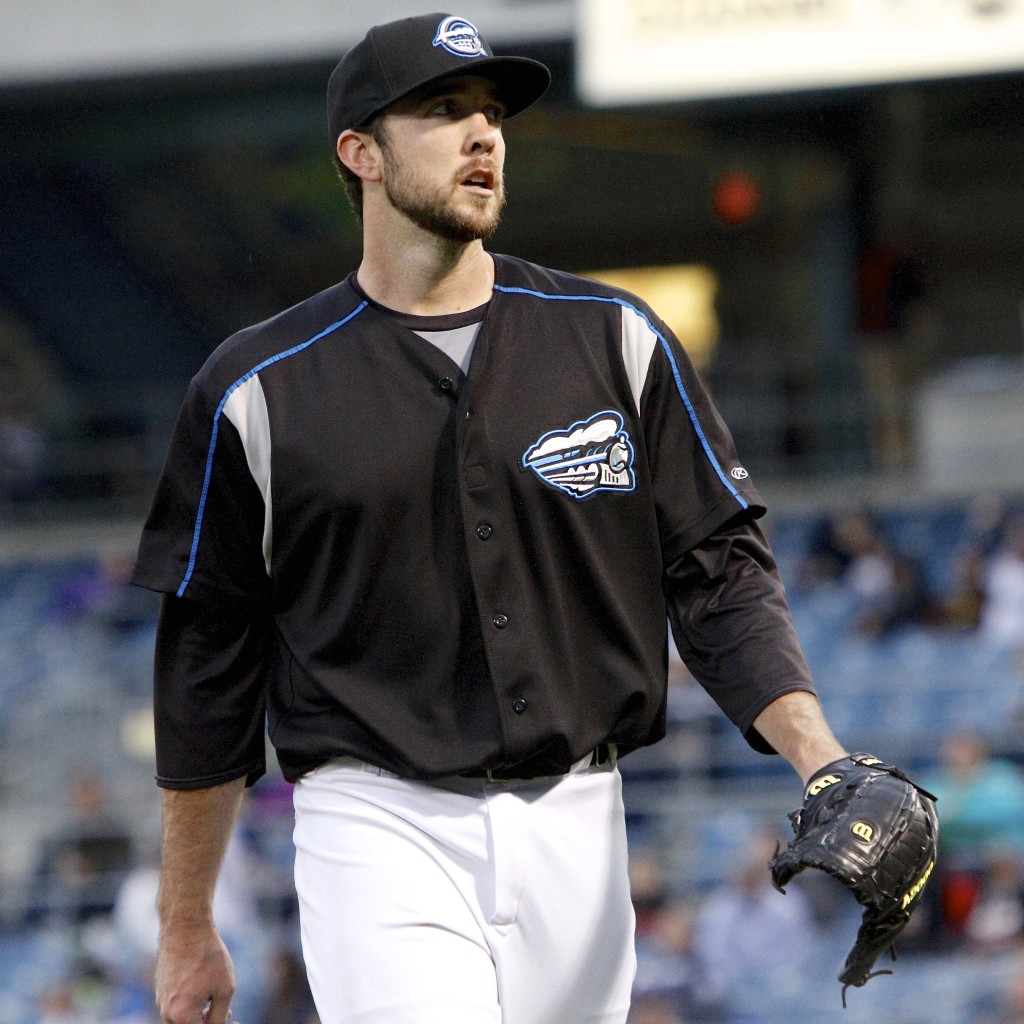 TH: I hate to bring up last year – I actually came up last year and made a couple starts – and not that the team was lacking talent, I just think the chemistry wasn’t there like this year and that happens, that’s part of every sport, every team. Sometimes it’s just not there and this year it’s different. There’s a different mindset. And that starts with Billy, Paul and Joe (manager Billy Gardner Jr., pitching coach Paul Menhart and hitting coach Joe Dillon), they bring consistency every day. Whether we lose 10-1 or win 10-1, it’s the same thing every day. They’re not going to come in and blow us out if we lose 10-1. We lost a game, OK, but we’ve got 75 more. You’re going to lose a game 10-1, but I’d be willing to bet we’re going to win a lot more games 10-1 than lose 10-1.

MM: You’re familiar with the Chiefs’ playoff history, or should I say lack of playoff history. What would it mean to bring post-season baseball back to Syracuse?

TH: Post-season baseball regardless of any level is always fun. I’ve been fortunate to play in it in Auburn and I played in it last year with Harrisburg. I think it would be great for the city, too, to be able to get behind the team and cheer them on and, like I said, this team has something special about them. I think the fans are starting to realize that this is a little bit different than what we’ve had in the past and hopefully we can keep it going.

MM: And perhaps this is the year you make your major-league debut with the Nationals. Have you given any thought to what it would be like to play in the majors?

TH: Sure, it’s my ultimate goal, obviously, but at the same time it kind of goes back to controlling what you can control and I can’t control that. The only thing I can control is how I pitch and how I prepare and all of that. I’m confident that they’ll make the decision if and when it’s right for me and everybody else. That’s their call and hopefully at some point it’ll happen but my job right now is to go out here and pitch as best as I can and keep our team in ballgames. All I can do is go out and pitch. There’s nothing else I can do or say that’s going to help me get there.

Is This The Year?

As the Chiefs remain in the running for a playoff berth, it’s worth pointing out that they have not made the playoffs since 1998, when they were affiliated with the Toronto Blue Jays and in their second year at what was then called P&C Stadium. The Chiefs were supposed to play the first two games of the best-of-five series in 1998 at home against Buffalo, but the Labor Day storm postponed those games. The first three games were then shifted to Buffalo and the Chiefs lost all three games, so they have never played a playoff game at what is now NBT Bank Stadium and they haven’t played a home playoff game since 1994.