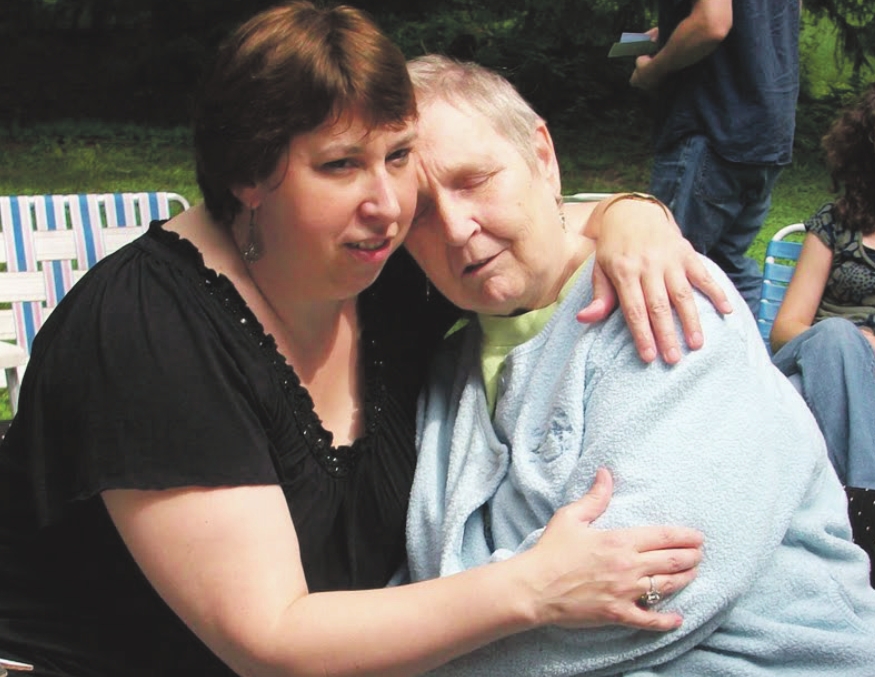 On Saturday, Oct. 5, I’ll be lacing up my rarely used sneakers, putting on a purple T-shirt and heading to Long Branch Park for the Walk to End Alzheimer’s. Three years ago, Mom died of complications from this horrible, progressive, incurable disease. The walk draws attention to the disease and raises money for education, assistance for caregivers and medical research.

Experts think Alzheimer’s is caused by abnormal deposits of proteins, which form amyloid plaques and tau tangles in a person’s brain, causing neurons to stop working correctly. Let me translate that for you: Your loved one will start forgetting things, getting lost and making mistakes with her checkbook. She’ll begin mixing up words and talking about things that make little sense to you.

Within a few years, even with medication that may slow some symptoms, her eyes are usually glazed, and she won’t always know who you are or where she is. She becomes incontinent. She’s easily frustrated by tasks like feeding and dressing herself, and soon she can’t do these things without help. As time goes on, she has trouble chewing food or swallowing pills. Eventually, she can’t walk, swallow or breathe, and she dies.

It’s devastating to watch, and it’s going to become even more common. About 5.3 million Americans—including about 45,000 people in Central New York—have Alzheimer’s disease. Experts say the national figure will increase to at least 13.5 million Alzheimer’s patients by 2050.

My mother died at home, about six years after diagnosis. I was her primary caregiver, taking advantage of a generous family leave policy that allowed me to work part time for two years to care for her. According to the groundbreaking 2010 “Shriver Report on Women and Alzheimer’s,” our situation was not unusual. The report found that more women than men are diagnosed with Alzheimer’s, and women disproportionately serve as caregivers.

Interestingly, a recent study found that more men than women have dementia with Lewy bodies, the second-leading cause of dementia after Alzheimer’s. Gender-based research may answer questions about why these diseases affect men and women differently.

Meanwhile, caregivers need financial and emotional support. We also need a stronger federal policy on family leave, an elder-care tax credit and improved regulation of senior’s programs and health care facilities for people with Alzheimer’s. The problem is not going away.

“With Americans living longer and with the incidence of Alzheimer’s growing, what’s going to happen to our women, our families, our workplaces, our attitudes, our society, as the Alzheimer wave hits over the next few decades?” Maria Shriver wrote.

Her father, Sargent Shriver, the politician known for creating the Peace Corps, was diagnosed with Alzheimer’s disease in 2003. He died in 2011. In recent years, we’ve learned of other high-profile Americans with the disease: longtime University of Tennessee women’s basketball coach Pat Summitt, musician Glen Campbell, actor Peter Falk.

It’s good that these cases help educate people about the equal-opportunity disease. Another way is to help raise money for the Alzheimer’s Association. That’s what I’ll be doing Saturday, thinking of Mom with each step.