As on his previous visits, when he hosted screenings of Sleeping Dogs Lie, World’s Greatest Dad, God Bless America and Willow Creek, Goldthwait will bring with him another cinematic example of warped wonderfulness.

Call Me Lucky is Goldthwait’s heartfelt homage to his comic mentor Barry Crimmins, the acerbic political satirist who likewise had roots in Central New York. With his shaggy Afro haircut and walrus mustache, Crimmins resembled a dour Elliott Gould-esque sad sack circa 1980 when he established a Wednesday comedy night at Under the Stone, located beneath the Old Stone Mill in Skaneateles. An alternative newsweekly’s classified want ad that implored local wanna-be mirthmakers to get in touch with Barry “Bearcat” Crimmins somehow lured then-Bishop Grimes High School student cutups Goldthwait and Tom Kenny to enlist in the comical cause.

Crimmins soon decamped for Boston and started another comedy showcase at, of all places, a Chinese restaurant named Ding Ho. When the club took off, Goldthwait and Kenny eventually migrated to the Beantown beachhead. 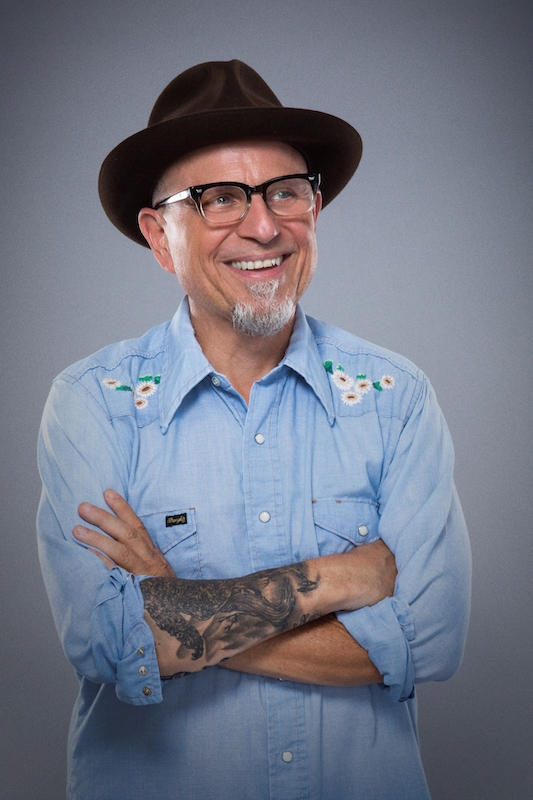 Crimmins’ story is accompanied by on-camera tributes from comedians who recall their salad days at Ding Ho, including Lenny Clarke, Patton Oswalt, Marc Maron, David Cross, Margaret Cho, Steven Wright and many more. Goldthwait himself recounts an unfortunate nighttime bender of booze, blow and throwing a videocassette recorder out of a window. Crimmins gave him money and the career advice that perhaps he should pursue another line of work; Goldthwait chose sobriety instead.

The early portions of Call Me Lucky play as an oddly affectionate mix of vintage clips interspersed with modern-day commentary and even some cartoon interludes, with Crimmins’ act recalled in all of its chain-smoking, beer-swigging glory. “I got caught smuggling books into Kentucky,” he fires off during one long-ago bit. “I got off on a technicality. No one could prove they were books.”

Still, Goldthwait hints at the darker elements to come. The framing scenes of Crimmins, now 62, chopping wood at his rustic retreat in Bath, N.Y., feel both ominous and sad, while Crimmins declares that if he had his druthers, “I’d like to overthrow the government of the United States. And I’d like to close the Catholic Church.” Crimmins also chips in some bitter reminiscences regarding a Skaneateles priest known for his uncomfortable overtures to young boys. (Uh-oh.)

Goldthwait uses the old footage to steadily chart Crimmins’ increasing sense of rage, which was felt by other comics while watching him perform, especially when Crimmins would brutally shut down would-be hecklers. Around the 45-minute mark comes the shocking moment — and viewers will likely snap to attention — when Goldthwait pulls the rug out, just like when Marion Crane checked out of the Bates Motel in Psycho, as Crimmins revealed a long-suppressed memory to a 1992 club audience that was surely expecting subversive political jabs. 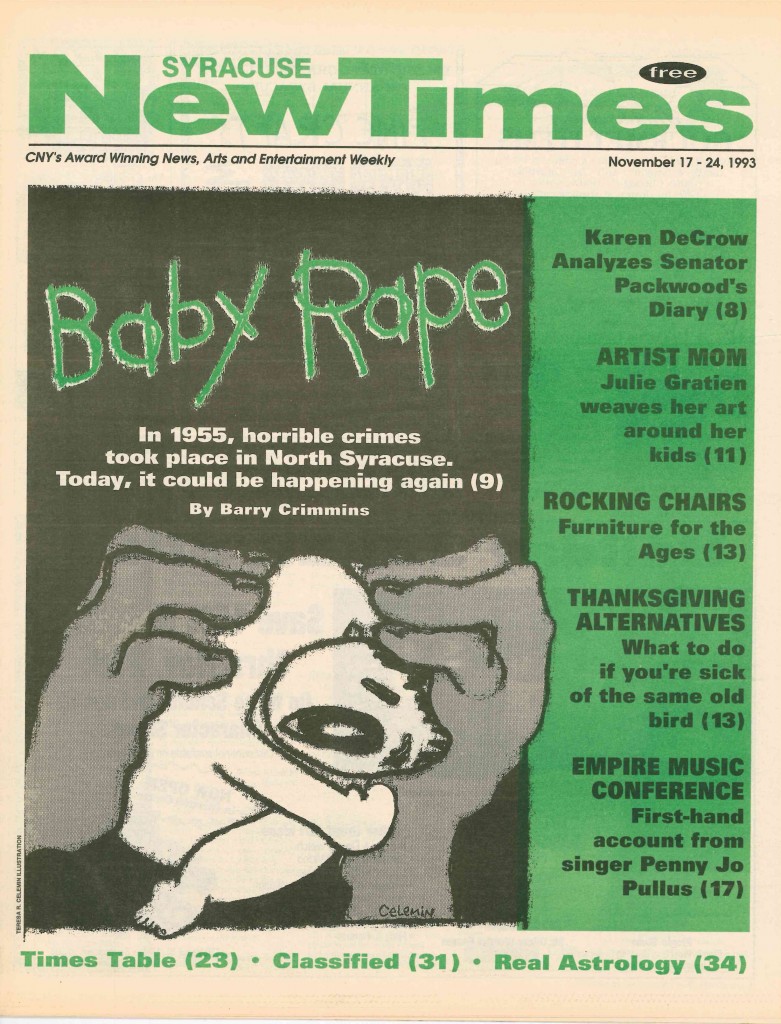 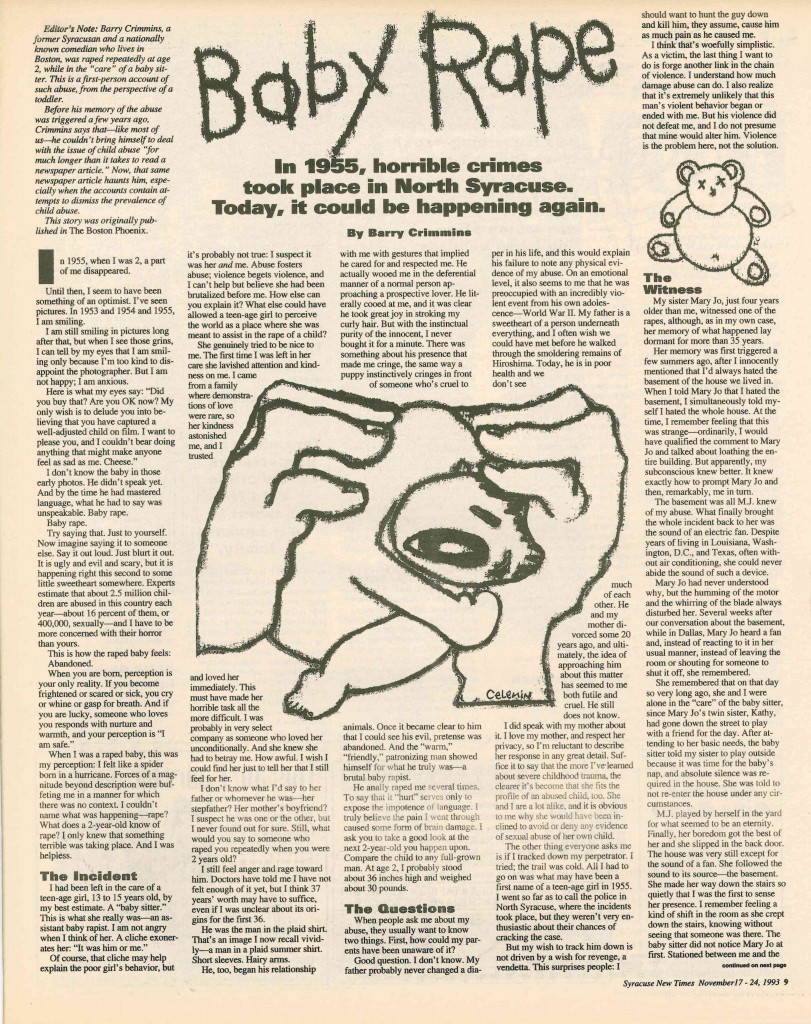 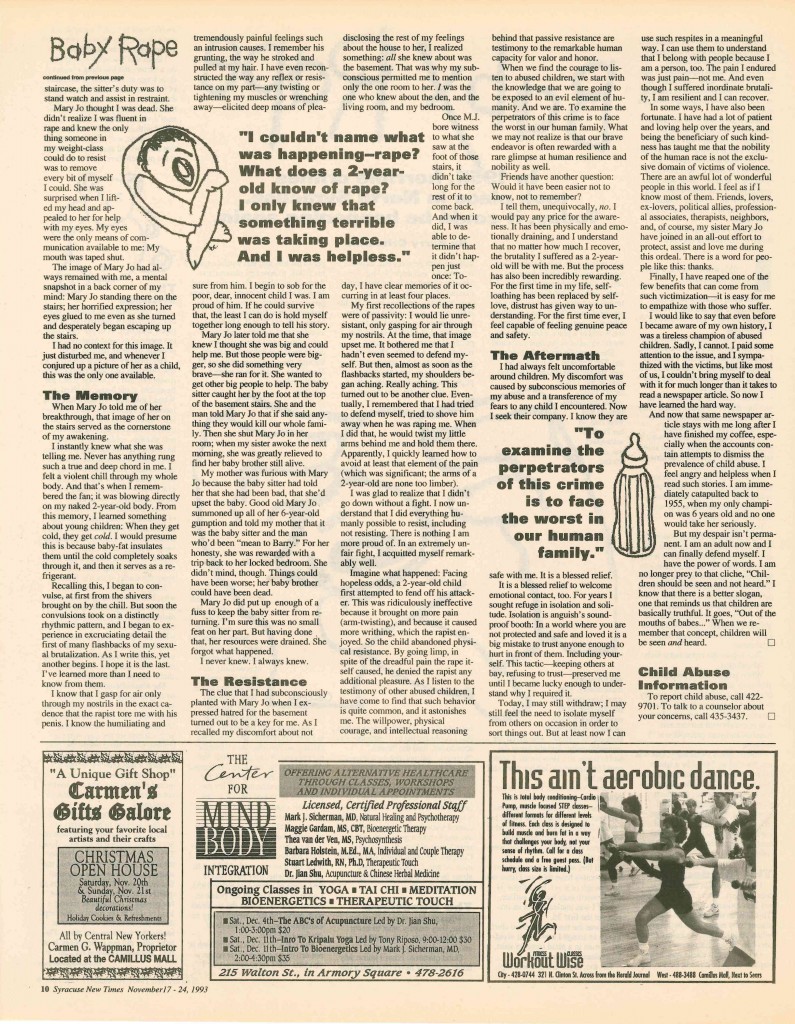 Let’s label this as a spoiler alert, although longtime readers might already know about Crimmins’ childhood nightmares in a first-person account titled “Baby Rape,” which was published in the Nov. 17, 1993, issue of the Syracuse New Times. Crimmins, then a cherubic 2-year-old in 1955, was assaulted several times by a babysitter’s male acquaintance in a North Syracuse basement. Click the images to enlarge.

He was saved from more harm by the intervention of his 6-year-old sister, Mary Jo, who was initially told to stay away because Barry had to take his afternoon nap. “She was surprised when I lifted my head and appealed to her for help with my eyes,” Crimmins wrote. “My eyes were the only means of communication available to me. My mouth was taped shut.”

Following this bombshell, Crimmins’ activism led him to become a crusader against the then-blossoming cyber-porn websites that specialized in child abuse. Goldthwait features potent, eye-opening footage of Crimmins squaring off against an America Online honcho during a Senate hearing, as the AOL exec maintained that a three-strikes-you’re-out policy would actually be a deterrent against these pedophile traffickers. Crimmins does find some bizarre black humor regarding his hearing alongside the likes of old war horses like Strom Thurmond: “With my Jerry Garcia tie, I looked like a marijuana farmer at an arraignment.”

Call Me Lucky builds to an emotional catharsis that leads Crimmins back to the scene of the crimes. While basement backdrops are a standard device in horror creepshows ranging from Night of the Living Dead to Sinister 2, Goldthwait depicts Crimmins no longer a victim but a survivor, thus providing the true meaning of the film’s title in an upsetting yet uplifting documentary.

Goldthwait and Crimmins will be on hand for a question-answer session following the screening of Call Me Lucky on Saturday, Oct. 17, 9:30 p.m., at Eastwood’s Palace Theatre, 2384 James St. Admission is $10 for adults, $8 for students and seniors. An $18 “all-night Bobcat special” also features the 11:45 p.m. screening of God Bless America.