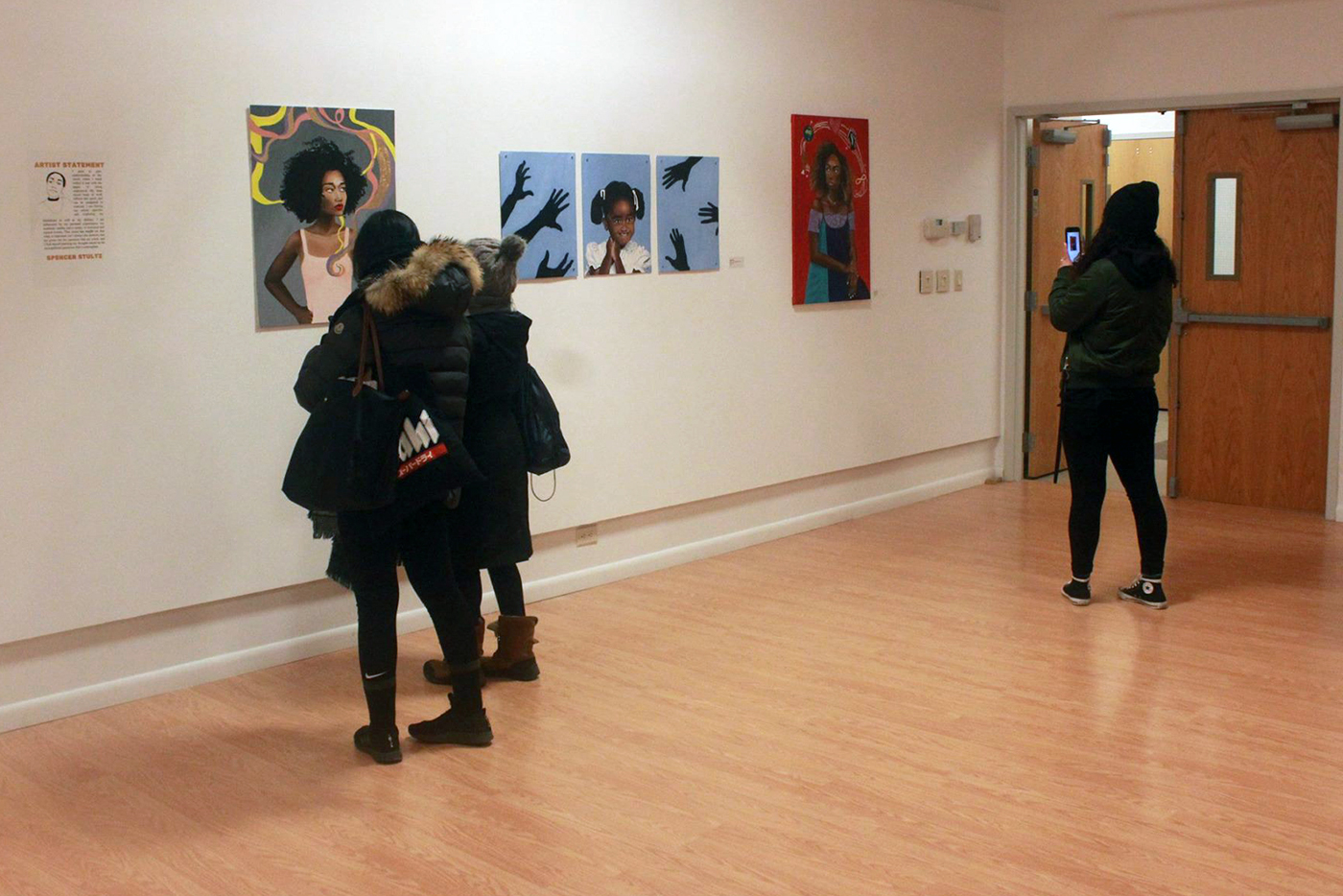 “I, Too, Am America” exhibit touches on present and past world issues.

The new exhibit at the Community Folk Art Center, I, Too, Am America: A Song of Race and Language, focuses on issues relevant today and in the past. The show features diverse media, including screenprints, mixed-media pieces, photos and personal statements.

In one of his screenprints, for example, Jamaal Barber combines an image of a brick building with signage associated with products and services all too common in inner-city America. That includes check cashing, liquor and Newport cigarettes. The piece’s title, “What You Need,” has a sardonic ring, as it suggests a gap between what’s available and what’s truly needed.

Similarly, “Damn Near Free II” has glimpses of African Americans being confined, as seen in images of hands bound, a teenager being arrested, and members of a crowd being arrested. Viewers are challenged to consider visual and thematic implications, including their own perception of such images.

A second artist, Ann “Sole-Sister” Johnson, works with found objects such as feathers, branches and grass and employs a process called intaglio. She incises or engraves images of African Americans on glass or feathers or leaves.

In one instance, she tied straw together to make nine small objects and then hung each of them on string. The objects hold grass and a tiny leaf with an image on it. In another, the artist has merged branches, twigs in a small container, and a feather inscribed with an image.

Other works by Johnson demonstrate her ability to rework familiar objects. Two glass cases sit side by side, with feathers and a small image in one, and the other cracked open and holding a representation of a small hand.

She again employs glass in an artwork consisting of nine glass squares; Johnson has embossed several of them with text such as “Protest Matters” and “Say Her Name.” Yet another piece takes five glass boxes and places sunglasses in each of them. Some of the lenses are decorated with an image of a person, suggesting connection between a viewer and the individual being viewed. The sunglasses signify that power rests with the viewer.

Her pieces on display draw from several of Johnson’s projects, such as “Nesting” and “Converse: Real Talk,” but certainly don’t expose her entire body of work. Nonetheless, the pieces show how she’s able to recycle familiar objects into incisive artworks.

Kleaver Cruz, meanwhile, is a writer, a community activist in New York City, and a coordinator of the Black Joy Project, which appears online on Instagram. It joins photos of more than 100 African Americans and their response to one question: What does Black Joy mean to you?

The Community Folk exhibit presents eight Black Joy images taken not in a studio but at various sites. Thus, Stephanie George appears in a café, Romelia Cruz stands by a mural, and Saudii Gracia is below a bunch of flowers.

Their statements vary as well. Cruz speaks of wanting “to see my kids do wonderful things to help make the world a better place,” while George talks about “Freedom in complexity. It’s richness in a dull world. It’s the product of being a hope warrior.” They, like all the people interviewed for the project, are everyday citizens.

I, Too, Am America blends their statements as well as the varying media utilized by Johnson and Barber. Viewers have an opportunity to view interesting work, to get a sense of artistic missions, and to think about the subjects referenced by the show. Thus, it’s a successful exhibition.

Sammys Gets Its Moe.-Joe Working
Famous Artists To Bring In Disney Mane Event
To Top