Sure, he’s funny in this writing and directing debut from Theodore Melfi; the broad stroke paints St. Vincent as a comedy. Imbd calls it such. Wikipedia goes with comedy-drama. As I sat through the 102 minutes of the late afternoon Saturday matinee, I found it to be a pleasing hybrid of a film.

The crusty Sheepshead Bay world of Vietnam vet MacKenna is no place for any sort of the kind of slapstick that’s brought Murray to the front of the comedic line in decades past. Oh, wait, there he is backing his vintage woodie paneled car over his white-picket fence and taking down his mailbox as he tries to conclude a post-bar excursion into his driveway. No, this is kind of sad.

He bops a Russian hooker – Naomi Watts, taking the part as far as she can from stereotype – in his bed. Well, he lets her do the bopping, and even drives her in his car and talks to her so we can discover that her name is Daka, she’s pregnant and they’re a regular thing. No, this is kind of dramatic.

He looks out his front door after the sounds of a moving van crashing into his old tree knocks limbs onto his car and sees opportunity. The curmudgeon immediately tells new neighbor Maggie that the moving company will pay for the damage to the car, but she’ll have to spring for the tree and the fence. Melissa McCarthy, as Maggie, sighs in resignation, and shepherds her 10-year-old son Oliver inside so they can begin their life alone after fleeing from his philandering father. Jaeden Lieberher, as Oliver, looks from one adult to the other and gathers in all of this information, slightly more curious and perhaps less wary than his mom. Yes, this is going to be a good mix of emotions.

It is indeed the play between these three actors that make St. Vincent a good movie.

McCarthy goes for understated as the hard-working Maggie, a mom overwhelmed by what her cad of a husband has done who takes on a new home in a strange neighborhood and a new job running a CAT scan machine. That means she has to send her son to a new school, a Catholic school. The kid tells the personable priest-teacher, tenderly played by Chris O’Dowd, on the first day that he’s Jewish. No problem, says Brother Geraghty, the class is full of different religions, and even non-believers. 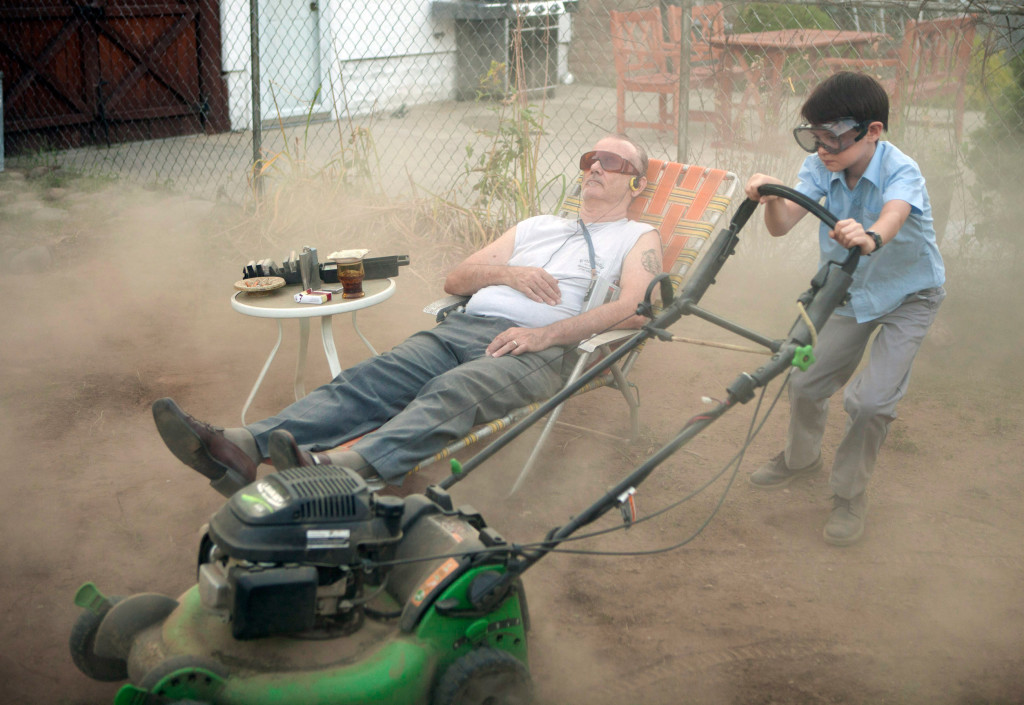 Lieberher takes that all in soberly. He’s a wonderful young actor, a youngster who’s a believable kid by being serious when runty Oliver’s being picked on by the bigger boys, and happy when Vince is teaching him how to defend himself and just a little giddy when he’s reporting to his unlikely babysitter the news of what happened when push came to defend back at school.

Yes, of course, the old guy reluctantly agrees to take the kid in for a couple after-school hours daily for the busy mom, but strictly under his terms and at the rate of $12 per hour, $11 if she provides the snacks. Oliver tells her that Vince’s sushi — sardines with crackers and hot sauce — aren’t so bad.

The see-saw balance between veteran Murray — mostly spit and venom but unable to hide a glint in his eye — and neophyte Lieberher — all big eyes and wonder but unable to hide wisdom beyond his age — brings St. Vincent two or three claps beyond where the story might have landed under lesser talents.

As the credits roll, Murray gets a solo turn deserving of his stature. He’s sitting on a folding lawn chair in his dusty Sheepshead Bay backyard, a scene unrelated to anything to do with the plot, really, except perhaps for the lyrics of the song that’s playing. Murray is watering a dead plant from a hose, and he’s singing along to said song, Bob Dylan’s classic “Shelter from the Storm.” The whole thing. Most all of the crowd that filled a good portion of the upper-stadium seating stayed watching until the screen went black and the house lights came on.

Even with John Wick poised to do well, Keanu Reeves ain’t what he used to be
Marvel’s Phase 3 splashes all the way into 2019
To Top