Jeff Watkins’ high school teachers used to punish him for bringing comics into the classroom. But now that he owns his own comic book store, Watkins roams high school hallways at will to give lectures on his favorite spandex-clad heroes.

With the uncanny success of the superhero movies from Marvel Comics, beginning with director Bryan Singer’s X-Men (2000) and continuing through Peyton Reed’s Ant-Man (2015), what will happen to their two-dimensional counterparts? While box-office receipts continue to skyrocket, sales of physical comics have yet to recover fully from their sharp decline in recent decades. It’s a problem that Watkins, who owns Cloud City Comics and Toys in Shoppingtown Mall, knows well. 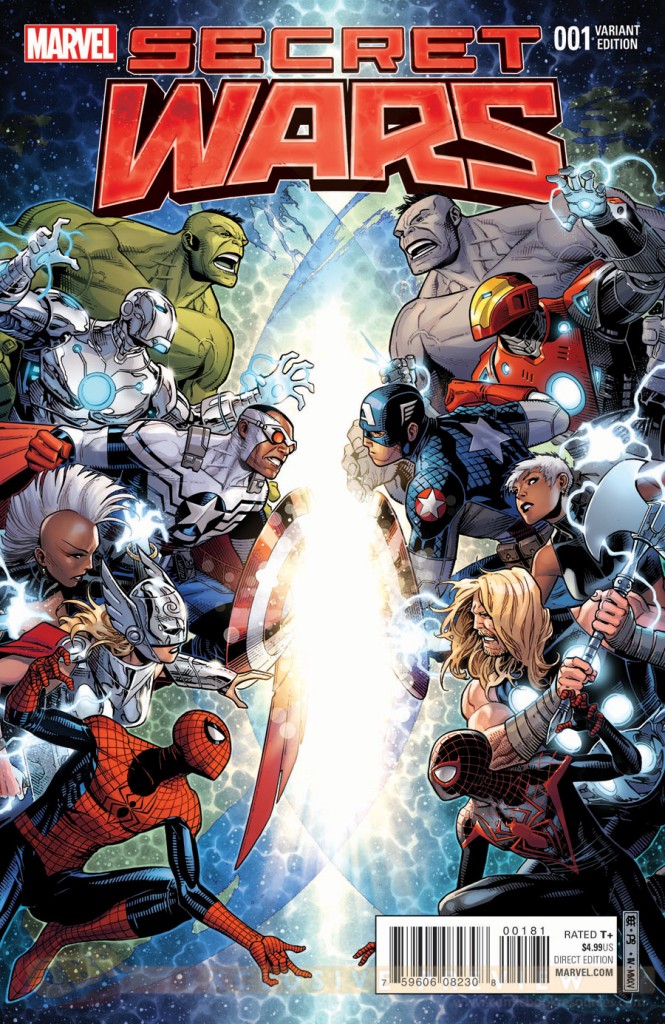 In an effort to balance these figures, executives at Marvel announced a major overhaul this year intended to align the comics with the films. The Secret Wars comic books were introduced in May and, after a few months of publication delays, are scheduled to finish in December. The title is a reference to a similar storyline that ran in the 1980s. The narrative involves every living character (and quite a few of the deceased) in the Marvel pantheon. Secret Wars will reshape the very fabric of the characters’ universe.

When the dust settles, familiar titles such as The Amazing Spider-Man and Uncanny X-Men will have ended. Instead, Marvel will launch a new set of flagship comics featuring familiar characters.

Marvel isn’t calling the shakeup a reboot. Watkins said that Secret Wars is more of an “alignment.” In the past, characters such as Wolverine and Captain America appeared in many different incarnations in the comics. Between the rampant dimension-hopping and time travel, major characters sometimes have as many as four or five versions of themselves running around the pages. Now, Marvel is consolidating all of those different versions into a single character. Moving forward, there will only be one Wolverine, one Steve Rogers.

Watkins is skeptical of whether this will draw new readers. “I think Secret Wars is a little overwhelming to newcomers,” Watkins said. “But everyone is excited about tying the comics closer together with the movies.

“When I was a kid, I used to have my comics taken away for bringing them to high school,” he recalled. Watkins now speaks about comics to students and about how the stories are positively affecting mainstream society.

Syracuse native Tom Peyer has written for Marvel and DC Comics, and even contributed several long-running comic strips to the Syracuse New Times. Peyer said that this sort of overhaul is not uncommon. Every four or five years, one of the two major comic book publishers uses some sort of reboot to bolster sales.

This allows readers to “get in on the ground floor,” Peyer said. It’s a way to avoid the rich, complex history of the characters and experience them in a new incarnation for the first time. “I think that’s probably really fun for people.”

It’s too soon to tell whether Marvel’s physical comic sales are picking up due to Secret Wars, although overall sales have been rising in the past couple of years, hitting a 20-year high in 2014.

Marvel has been trying with limited success to synergize its movies and comics for years. Matt Terry, an employee at Comix Zone in North Syracuse, said this usually means capitalizing on the popularity of the films. But, he noted, it doesn’t always lead to a direct, visible boost in sales.

This may be true locally, but the national impact has been significant. Rocket Raccoon No. 1 dominated sales charts in July 2014 with nearly 300,000 copies sold. In comparison, Secret Wars No. 1 sold an estimated 527,678 copies last May.

Comix Zone owner Greg Van Camp said he thinks Secret Wars is more about unifying the different iterations of the stories and making them work together, rather than growing the comic book audience. The millions of people going to see Marvel’s films are not all suddenly becoming interested in reading comics, and sales will probably never be what they were during the 1990s.

The full effect won’t be noticeable until after the shakeup concludes in December. “Secret Wars is replacing regular titles,” Van Camp said. “The key will be ending the stories in a convincing way that leads smoothly into the new universe.

Peyer said that the shakeup is an indication that the very nature of storytelling in comics has been changing. “Used to be, every panel was a scene. Now you see multiple panels devoted to filling a glass with water to create dramatic tension,” he said. “Comics are a lot more cinematic now. Sometimes, I think comic books are too much like TV shows.”

Daredevil comics, for example, have a narrative structure similar to the recently released Netflix series of the same name. Multiple episodes or issues run together to form a complete season or arc, and multiple seasons or arcs slowly create and adjust the hero’s image. There is no real endgame in comics, as even death is easily reversible.

“If there was ever a city that needed superheroes, it’s Syracuse,” Watkins said. “We’re one of the poorest metropolises in America, but at the same time a master of reinvention and innovation.”

This is why he travels to high schools to spread the gospel of comics, of social inclusion and mutant rights. “All comic companies are doing a great job of thinking forward, of being socially and civically responsible,” Watkins said. “That’s the thing I’m most proud of, more than sales, more than anything. They’re creating a universe that anybody can be a part of.”

Jeremy Reynolds is a graduate student in the Goldring Arts Journalism program at Syracuse University.

Syracuse Boo Times
All About the Bass: 'JACO' Documentary Debuts in Syracuse
To Top