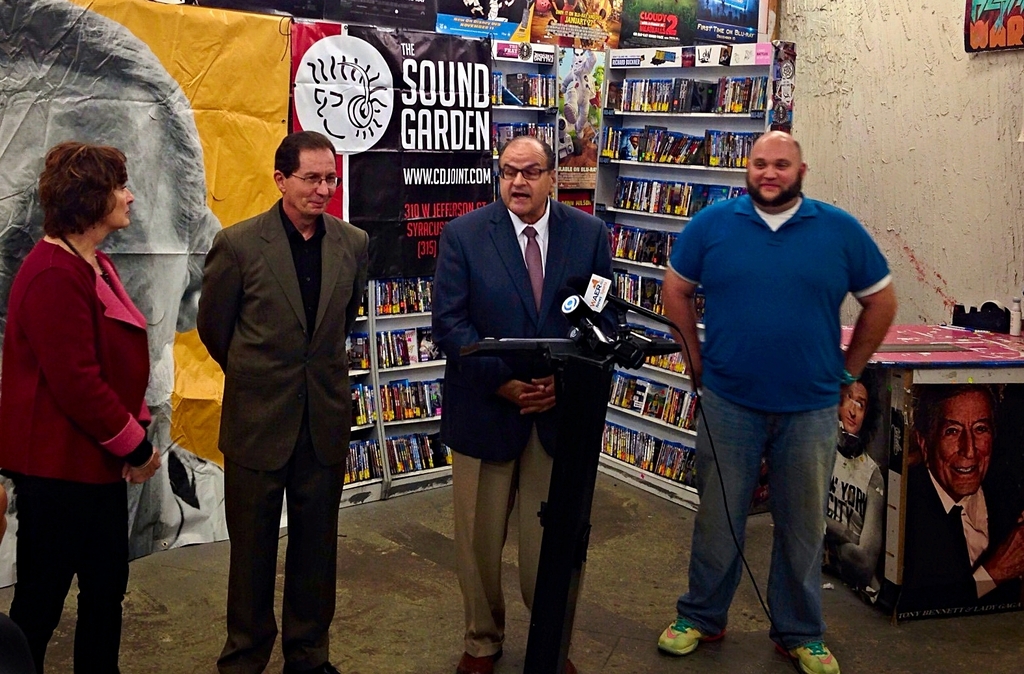 John Francis Anthony Pastorius III may not be a household name, but referencing his nickname “Jaco” may ring some bells.

To musicians, however, the name resonates all too well. The late bassist may have primarily focused on jazz and funk with his band, Weather Report, but his reputation and skill as a musician were highly regarded. His prowess is still admired almost 30 years after his death in 1985.

At The Sound Garden on Nov. 10, Syracuse Jazz Fest executive director Frank Malfitano quoted Sting. The former frontman of The Police made the analogy that Hendrix was to the guitar as Jaco was to the bass. To boast Pastorius’ collaborations, he worked with musicians in a variety of genres; some he worked with directly and others he inspired. Flea (Red Hot Chili Peppers), Joni Mitchell, Geddy Lee (Rush), Herbie Hancock and Robert Trujillo (Metallica) are just a handful of the people he touched.

The latter, Trujillo, took the reigns as executive producer of the documentary celebrating the musical revolutionary’s name. The film will also be debuting for the first time in the Northeast, here in Syracuse. This is all thanks to the collaboration of Jazz Fest, Syracuse International Film Festival, The Palace Theatre and The Sound Garden.

“You can’t do a film justice unless you have the right music,” said Christine Shapiro of the Syracuse International Film Festival. On behalf of her and her husband, Owen, she said they were excited to team up with the artistic entities to make the event happen.

“The jazzers liked to to claim Jaco as one of their own,” Malfitano said. He went on to explain the scope of genres Jaco was involved in.

“We strive for this. We love collaborations,” Shapiro added.

This Black Friday, Nov. 27, the showing of “JACO” will be premiering at The Palace Theatre. The film, directed by Paul Marchand and Stephen Kijak, is set to debut that evening at 8 p.m., while the event kicks off at 2 p.m. Trujillo will be at The Sound Garden for a special in-store signing. The event also coincides with Record Store day.

Eric Brush of The Sound Garden said setting this up was years in the making. The film was started almost six years ago when Brush met the Metallica bass player at the National Association of Music Merchants convention. The topic of conversation: How independent stores can help promote film. The rest is history.

Mike Massurin of Syracuse Film Festival said the pre-sale DVD will be the ticket to the meet-and-greet. The film at The Palace is free.

“This is a thank you to all of Syracuse for supporting us,” he said. It has also asked that a ticket be requested beforehand to attend the event. The tickets are available on a first come, first serve basis.

“This is the biggest film debut in Syracuse since ‘The Express,'” Malfitano said. The debut of the football documentary took place in 2008, which is the same year as the 25th Anniversary of Syracuse Jazz Fest. The festival was dedicated to Jaco that year.

There will be a few places in Syracuse as to where tickets can be picked up, and one of them will be at the Syracuse New Times. There will be special giveaways and contests to win tickets as well.

Malfitano also quoted Pericles: “What you leave behind is not what is engraved in stone monuments, but what is woven into the lives of others.”

Aside his referencing Jaco’s legacy with the statement, it was directed toward the project itself and to Syracuse. He, along with Massurin, the Shapiros and Bunch reemphasized the importance of the collaboration.

This is a treat, Shapiro said, to kick off the holiday season and for all to enjoy.