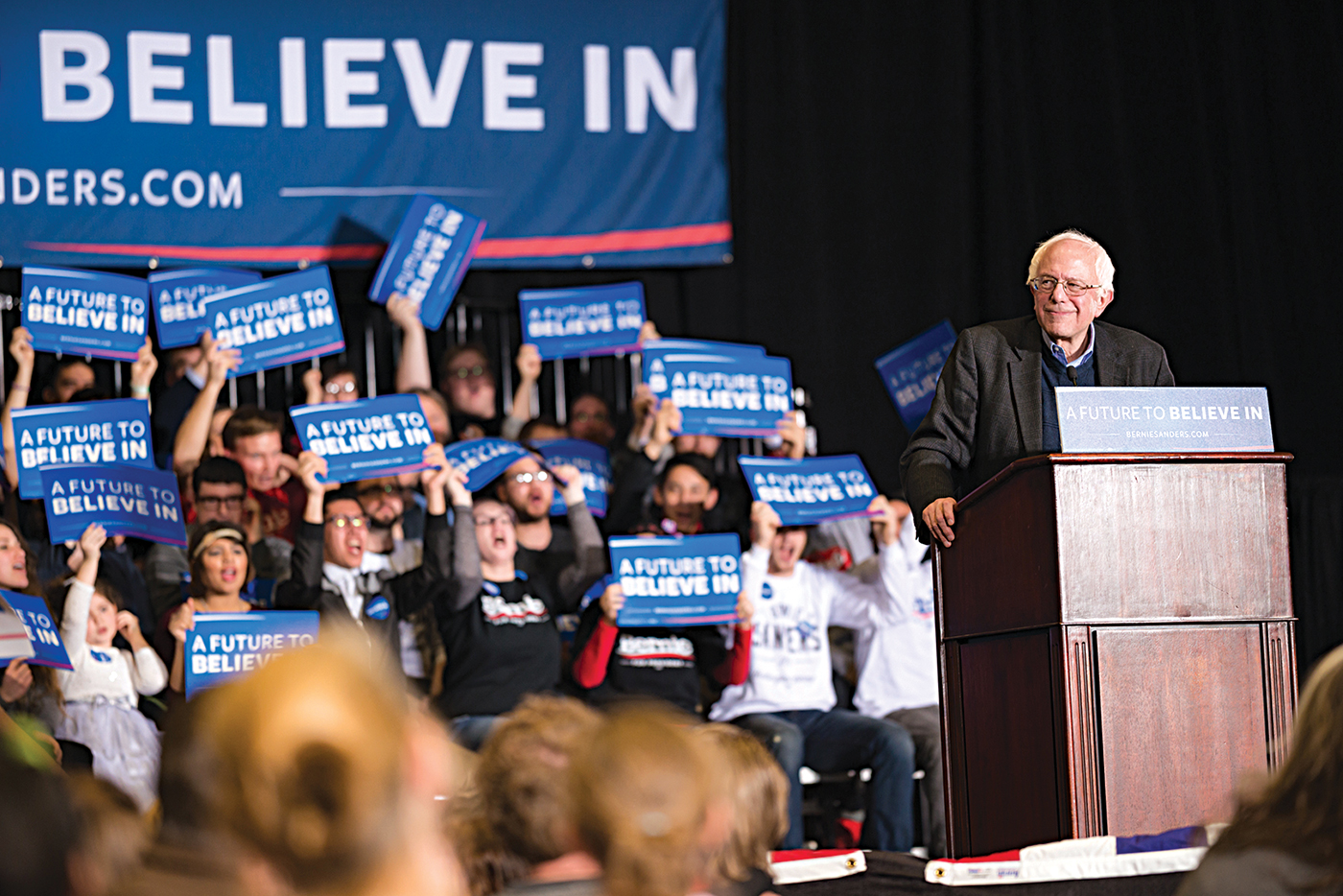 Bernie Sanders must do more than change the conversation in order to win.

Even with 14 bands and a crowd of hundreds dancing, singing and shouting, the loudest sound during the Jan. 8 benefit for Bernie Sanders at the Palace Theatre was “the Pause.” The Pause that follows when you ask the question: “Can he win?”

The ageless Cortland-based folk singer Colleen Kattau, after singing a riotous musical endorsement of the Socialist senator from Vermont that included her retooled version of the Johnny Cash classic “Ring of Fire,” skipped a beat before answering. “He has the potential to win,” she said. “He has changed the dialogue.” Kattau likes both Sanders’ style, especially how he avoids personal attacks, and his substance, praising him for listing climate change above ISIS as our most serious national security issue.

But are Sanders’ supporters serious about more than conversation? Is the upstart campaign that keeps the Clintons up late at night serious about exercising power?

Even Joe Driscoll, the prime musical force behind the event, paused amid declaring his love for Sanders and his take on the possibility of victory. “That depends on us,” shouted Driscoll in between introducing bands. “It’s gonna be an uphill battle. On just about every issue he hits it right on the head.”

Driscoll originally approached Funk ’n Waffles entrepreneur and Sophistafunk keyboard player Adam Gold about hosting the event at Gold’s downtown venue. When ticket sales boomed, the event was moved to the Palace, where it still sold out at $20 a head. Musicians donated their talents, the Palace offered the theater free of charge, and an enthusiastic crowd networked and drank, danced and sang ’til well past midnight. The place was alive. The crowd was young and old and nearly unanimously white.

Two older attendees I spoke with did not pause. Can Bernie win? “Yes,” snapped Pat Mahoney, a semi-retired nurse who has spent 27 years tending the ill at Crouse Hospital. As a woman in an older demographic, she might be considered a likely Clinton supporter. Instead, she is all in for Sanders. “He wants what every American wants: decent wages, health care for all, no more wars.”

“No,” replied Dik Cool, longtime head of the Syracuse Cultural Workers, before adding, “It would be nice.” Cool wondered if the young people in attendance would actually vote? That seemed to be the question on the minds of many veteran political activists. The Palace event, like many Sanders rallies across the country, was red hot with energy, but even many who like his message are unable to explain how that might translate into victory.

Which is where Michelle Mark and Lauren Livingston come in. Their table in the lobby of the Palace was covered with petitions to get Sanders on the ballot for the April 19 primary. Livingston, who formed a local political action committee to help Sanders, showed me a box filled with signed voter registration forms. Mark said she had gotten more petition signatures on this single night at the Palace than she had acquired during an entire weekend spent knocking on doors. Someone in this town is feeling the Bern.

Has there ever been a presidential candidate who drew so many people to an event in Syracuse (probably a thousand people showed up at some point)? In March 2000, more than a thousand people came out to cheer a then-insurgent Republican John McCain, at Le Moyne College. Jesse Jackson packed the Onondaga County War Memorial Arena (capacity 7,000) during his Rainbow Coalition challenge in the 1988 Democratic Party primary.

And here’s the difference: Sanders wasn’t in town for the Palace event. Nobody had to pay 20 bucks to see McCain or Jackson.

Add in the student factor, and you have to wonder. “Fund the Bern” took place in early January while most Syracuse University and Le Moyne students were out of town. Driscoll is talking about holding another Bernie bash in mid-April, just before the Democratic primary. If the Democratic nomination is still up for grabs at that point, organizers might want to ask themselves this question: Is the Carrier Dome available?