If Tony Bennett was entertaining any hints of retirement, it sure didn’t seem like such an announcement was in the cards any time soon, as the 88-year-old swingin’ singer ably demonstrated during his April 19 gig at the Turning Stone Resort and Casino’s Event Center.

Bennett came on strong at the venue, which was slimmed down by about half from its usual 5,000-seat capacity in order to present the main attraction and his four-piece band in a more intimate setting. (The Event Center held a major boxing bout televised by HBO just 24 hours earlier, which required a major teardown.) There was no doubt that his rich, resonant voice was still capable of blowing the roof off the joint, as Bennett took pleasure in vocalizing plenty of booming loooooong notes to climax most of the tracks on his setlist.

At one point during his infrequent between-song patter he told the story about the guy who once asked “Why do you sing old songs?” Bennett replied, “Because they’re better than the new ones,” and he kept proving it all night with classics like “Boulevard of Broken Dreams,” the Harry Warren-Al Dubin hit from 1933, to the Gershwin brothers’ 1930 “I Got Rhythm” and 1937’s “They All Laughed.” Indeed, Bennett’s retro-reliance on enduring melodies since his career began more than 60 years ago can be summed up by the title of a 1942 Jerome Kern-Johnny Mercer ditty: “I’m Old-Fashioned.” 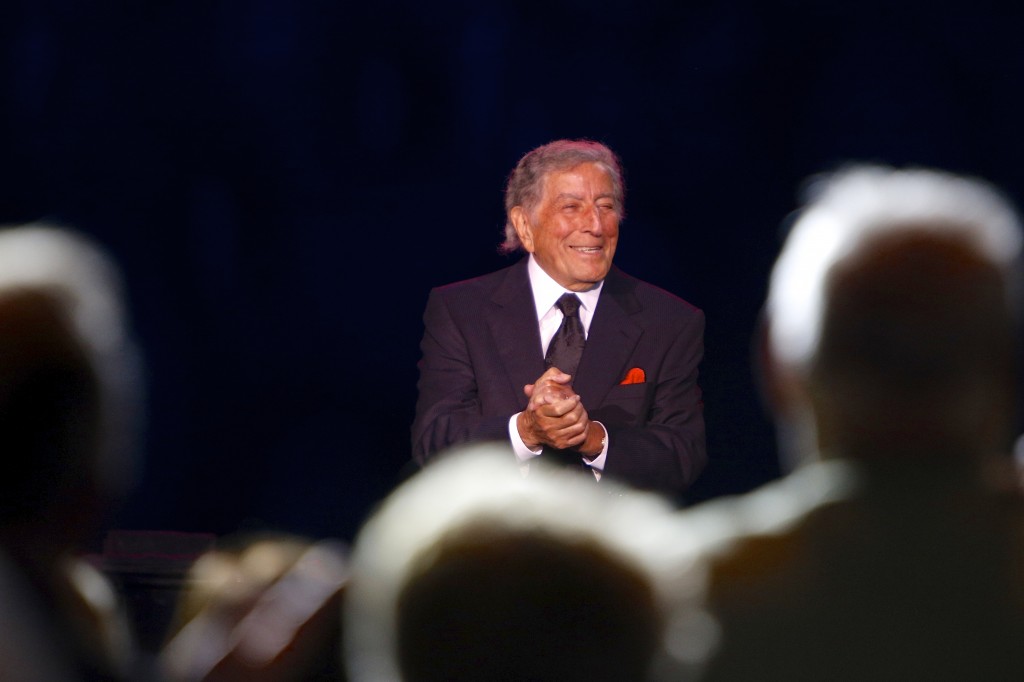 Bennett’s comfort zone was enhanced by his talented backing quartet of percussionist Harold Jones (dubbed “Count Basie’s favorite drummer”), keyboardist Mike Renzi, upright bassist Marshall Wood and guitarist Gray Sargent. The singer would often warble part of a song, then exhort “Take it!” to his crack ensemble as they delivered the sonic goods during solo spotlights. Renzi, in particular, could underscore one song with a tinkly elegance, then come roaring back for some raucous piano-pounding for the next.

Bennett’s minimalist approach to music has always yielded maximum results, while his can’t-go-wrong selections from the Great American Songbook has bolstered his coolness quotient during times when other artists in his league chose material that didn’t quite fit. (Does anyone remember Frank Sinatra’s take on Jim Croce’s “Bad, Bad Leroy Brown”?)

Yet at the Turning Stone, where many standing ovations dominated the evening, Bennett frequently ended songs with his clenched fist raised high into the air as a signal of triumph, as if to emphasize that he has always sang for his supper in his own unique style. Bennett breezed through 23 songs in 70 minutes, with jazz, blues and swing elements percolating underneath his careful phrasings and lyrical cadences. 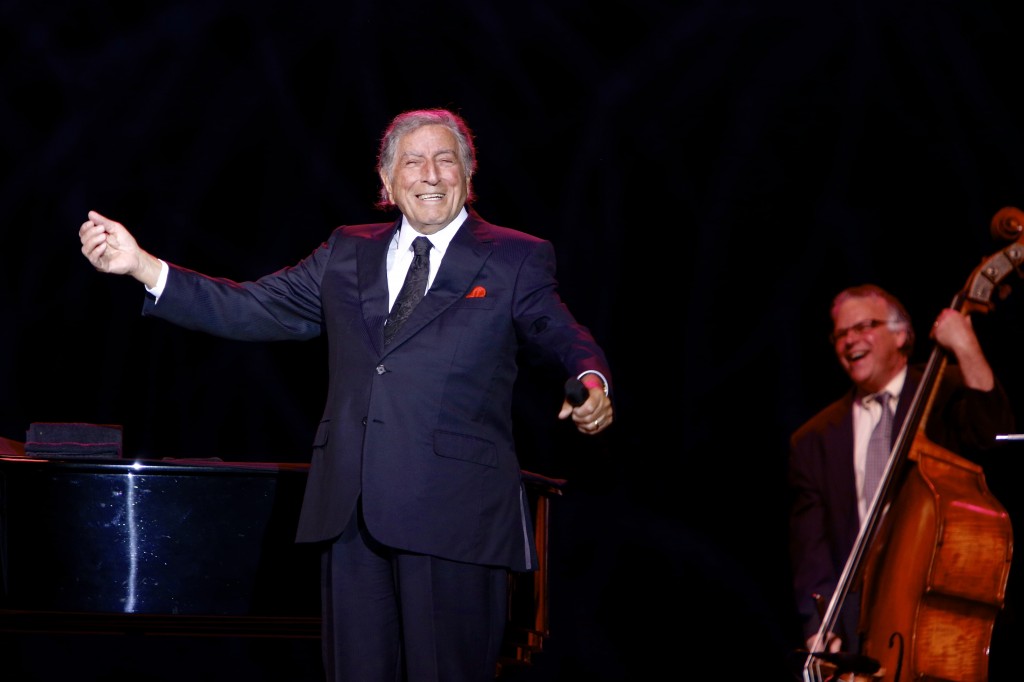 There were some laughs along the way, such as his tongue-in-cheek ad-libbing that he forgot the lyrics to “I Left My Heart in San Francisco,” a song that Bennett has delivered thousands of times since he recorded it in 1962. He also told the audience to buy the album Cheek to Cheek because his duet partner Lady Gaga “really needs the money.” There was the reminiscence about the fan letter from Charlie Chaplin that thanked Bennett for resurrecting the Little Tramp’s song “Smile.” Bennett also noted that he received an invitation to Pope Francis’ upcoming visit to Manhattan, then he segued into a rendition of “Sing You Sinners.”

Opening the show was his jazz-singing daughter Antonia Bennett, 41, who looked slinky in a black sequined gown. She’s also a chip off the block who knows enough to likewise stick to a half-dozen classic oldies, such as Noel Coward’s nearly forgotten “Sail Away,” during her engaging 20-minute set. 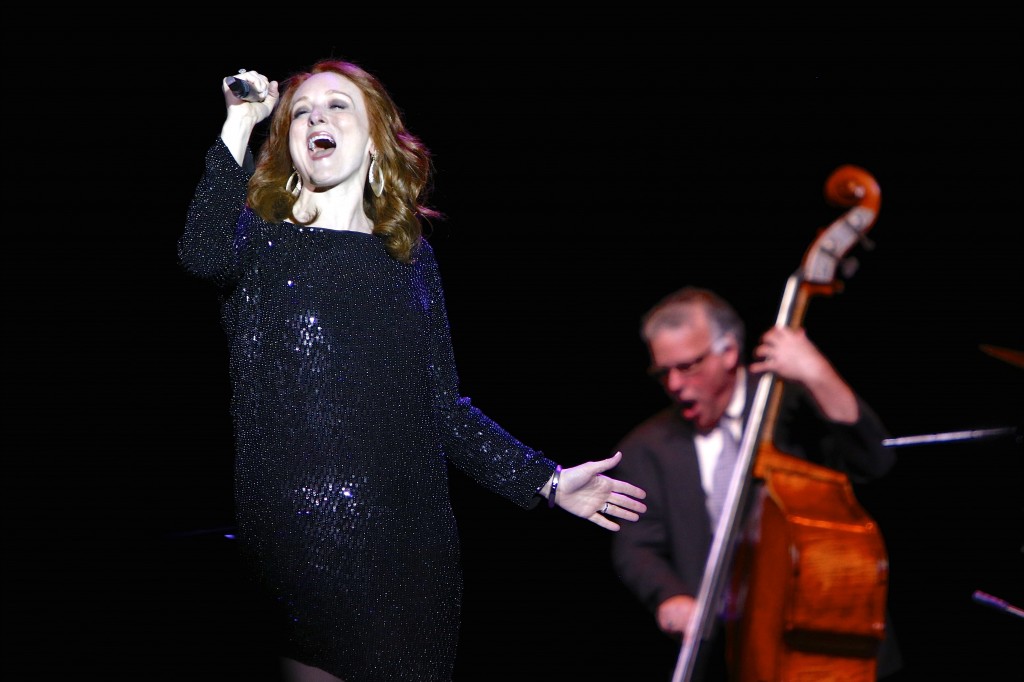 Early on during her dad’s show, Antonia was beckoned to retake the stage for a duet with Stephen Sondheim’s “Old Friends.” Proud papa Tony beamed throughout the song, and even gingerly performed a soft-shoe routine to accompany her. For Tony Bennett, maybe 88 is the new 58.