Dinomania returns to the MOST

Giant painted footprints lead up the historic armory stairs onto stage left: the “traveling exhibit” space, a motel to many fascinating scientific treasures throughout the years. This is the sixth time Dinomania has visited the Milton J. Rubenstein Museum of Science & Technology, but as developers and guests agree – it is the best display the MOST has ever had. 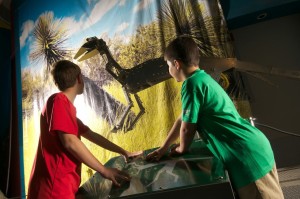 The lights and sounds can be heard before stepping into the museum entrance, giving the sensation of visiting a real world Jurassic Park. On the right is a robotic skeleton of a duck billed dinosaur, fully controllable by visiting paleontologists, giving parents the opportunity to assuage younger children that this is “not real.” An Apatosaurus mother feeds her young and also greets visitors. On the far left is a Tenontosaurus being eaten alive by four Deinonuchus (sub-species of Velociraptor, considered one of the most cunning and evolved of the dinosaurs). A Eucoplocephalus waves its massive clubbed tail over its heavy armor, known by many in its famous Fantasia fight against the T-Rex in the Disney classic. A Maiasaura mother feeds her hatching eggs nearby, while two Pachycephalosaurs or “bone heads” butt heads in a game of dominance. A lone Triceratops stands on the side, waiting for visitors to mount it for a fun photoshoot, while the beast itself – the Tyrannosaurus Rex – towers above the scene, it’s shrieking roar at close range is enough to raise the hair on the arms and run shivers down the spine.

“The dinosaurs are about three-fourths actual size,” said Kevin Lucas, Director of Information Technology and one of the principal developers of the exhibit. Even at partial height, the world they created seems real. 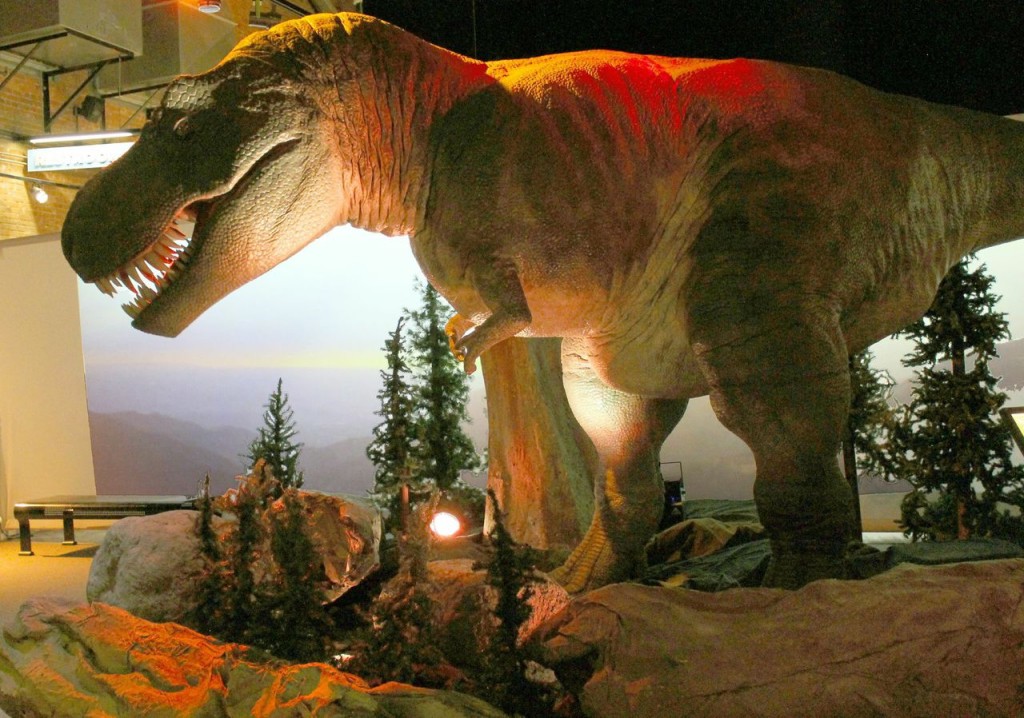 This fantastic collection traveled to the MOST thanks to the museum staff renting the animatronic figures from a Japanese company called Kokoro. The last visit in 2011, said the MOST president, Larry Leatherman, “was a great success.”

Through January 4, the exhibit will be open to the public. Many special events have been planned around the dinos: from guided tours, overnights, a Halloween party, science lectures, and more.

“We will even be open Mondays and Tuesdays during Christmas break,” said Maria Welych, Director of Marketing and Public Relations for the museum.

The exhibit takes an incredible amount of time and resources to come together. In addition to the negotiations with Kokoro, Welych carves out 40% of her marketing budget for the dinos a year beforehand, since it is such a huge attraction. Facilities Director, Chris Perrine described the setup as a “team effort” requiring 10 people. 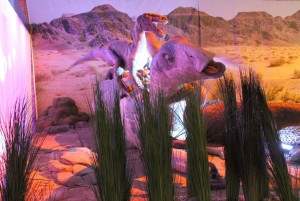 Long before the arrival of the “monsters” on September 16th, Lucas, together with Greg Welych, an expert computer technician and software developer, along with a local tech genius and innovator, Lorne Covington, were already in talks with the museum staff in March on how to create a concept that will instill wonder in the guests, while creating the technological means to make that happen.

Lucas, a former visual manager for department stores who fell in love with his work here at the MOST,  is responsible for the overall setup and display, creating a believable world where one can easily imagine they are in James Gurney’s Dinotopia. Born from a lifelong computer interest, Greg Welych comes up with the lighting, special effects and sound, which not only have to sync with the animatronic motion of the beasts, but with a clever cinematic backdrop created by Lucas: a three day video cycle in 18 minutes featuring a forest fire, full moon, clear skies, and epic thunderstorm that reverberates across the entire space through Welych’s light and sound tricks. Welych links several Windows computers to a program called D4 that can be controlled by a Windows tablet for easy control “on set.” 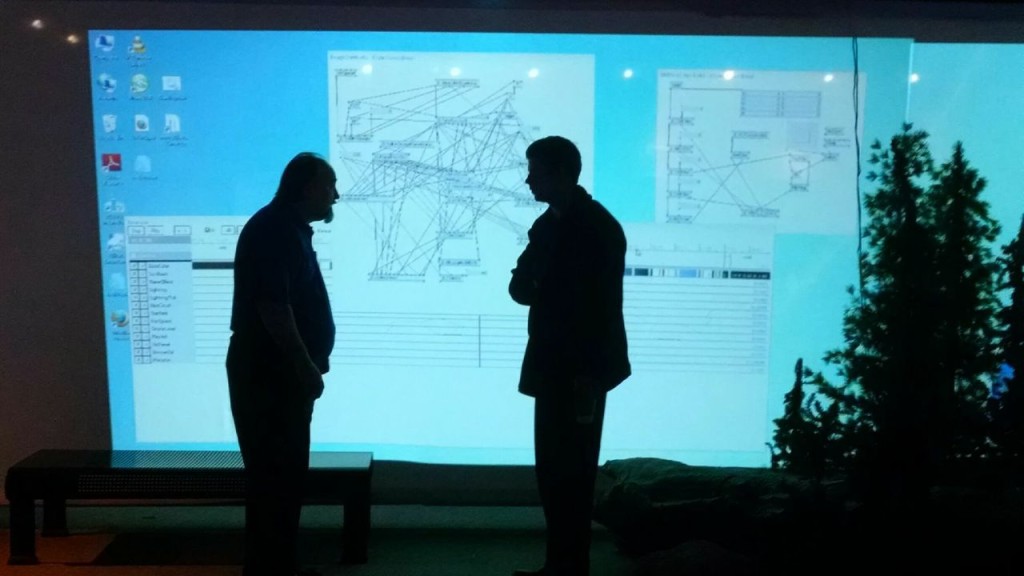 Welych links several Windows computers to a program called D4 that can be controlled by a Windows tablet for easy control “on set.”

“The initial programming took about a week and a half,” said Welych, “But afterwards it was tweaking the finished product to sync just right that took about three months.”

Lorne Covington, owner of Noir Flux, founder of two tech companies including Acme Fantasy Gadgets. He is a self-professed artist and technological genius and freelances with the museum to help Lucas and Welych create unique learning experiences for guests. Covington’s recent creations: The Electric Heliotrope Theatre, creating artistic colorful light with the syncs with human movement (think Tom Cruise in Minority Report, or for the younger generation – Tony Stark); as well as W.I.L.L. (Willful Intelligent Lazy Lifeform) – an onscreen robotic avatar that answers to the body in a similar fashion – both use the Windows Connect gaming technology together with Covington’s master programming skills.

“It’s all trigonometry,” said Covington, wearing his Hawaiian shirt under a kaki casual jacket. One could think of him as the eccentric Jeff Goldblum of the operation.

Covington is creating a new motion tracking feature for Dinomania that will afterwards stay with the museum while the dinosaurs become extinct: he calls it “Dino Dodgeball” which consists of a guest controlling a dino throwing lava balls at a competitor.

“We are setting up a screen a few feet away with live video feeds of the actual guests playing,” said Covington, “But the technology also is open to the guests playing against visitors in another museum – in Buffalo or even China!”

“I’m really an evangelist,” said Covington, who often consults with the museum, “Syracuse is very fortunate to have such a forward thinking, immersive and interactive science museum.” Convington is also doing this work pro-bono, out of the sheer enjoyment in doing what he does and opening younger minds to a brave new world.

“Folks here are adventurous and want to do cool stuff!” he said, looking at Lucas and Welcyh but speaking for the entire organization.

“Our vision for Dinomania is to hit the senses and capture the emotion of the visitors,” said Lucas, between stories of shivering below the T-Rex: “Our goal is to inspire the guests and inspiration needs emotion not just the intellect.”

“It’s like being in the Grand Canyon rather than seeing pictures of it,” said Covington. Greg Welych recalled open week seeing kids running away, scared of the “dinosaurs.”

“There’s a fine line,” he said, “Of inspiring older kids but not scaring the younger.” 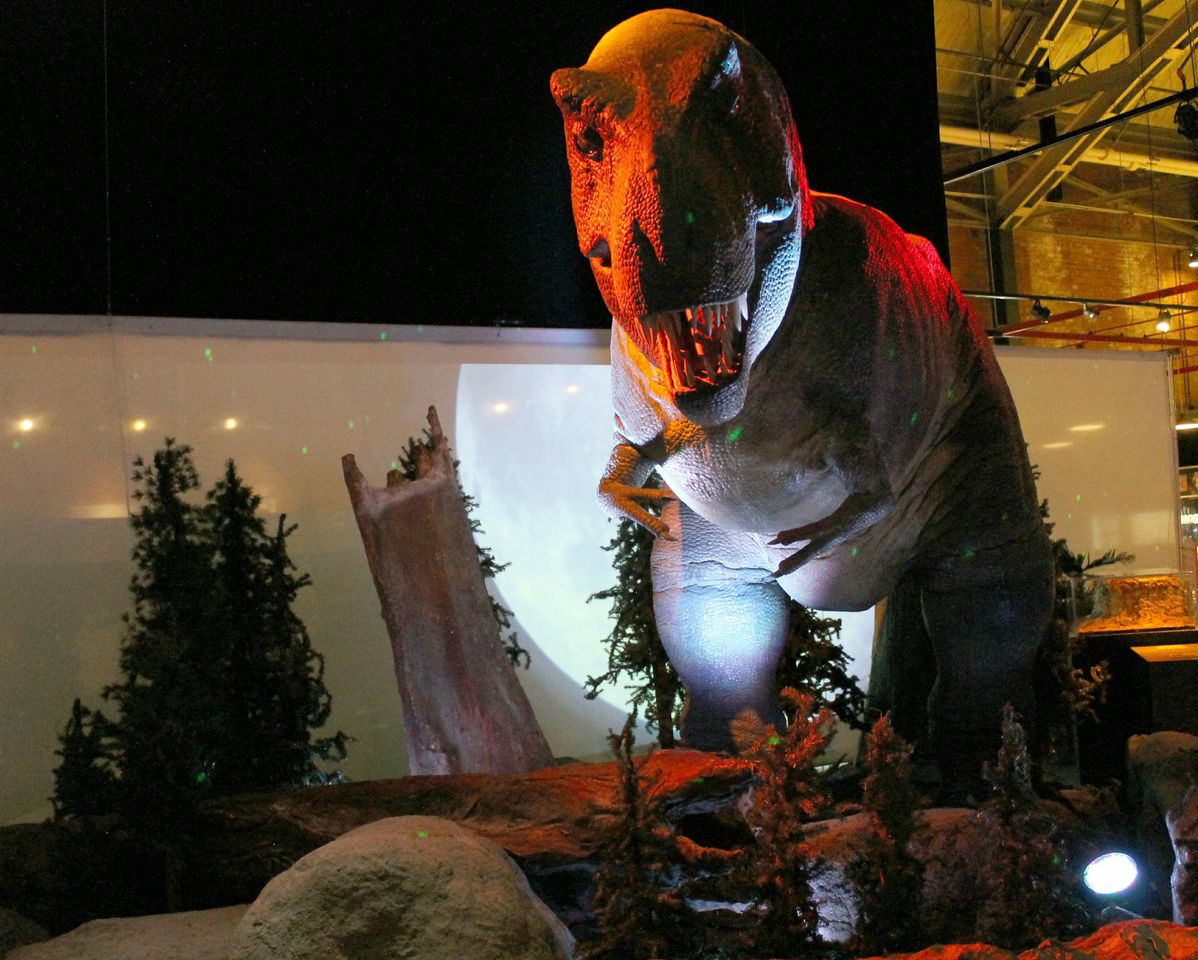 The three developers enjoy showing up to see both children and adult wonder at the world they’ve created, many believing for a moment that it is all real.

Lucas recalled watching a 17 year-old jock say goodbye to the T-Rex with not a self-conscious thought in his head. Welych watches children pat the dinosaurs on the nose.

Covington relates one poignant story of his Dancing Light Theatre. The museum offers “sensory friendly days” once a month for individuals who would be otherwise overwhelmed by the full intensity of the presentations, turning things down for those impaired by handicaps, etc. Covington watched as a woman played on the light-dance Connect with her autistic son, throwing colorful shapes in the air.

“She came up to me after with tears in her eyes. ‘That’s the first time we’ve played together,’ she said.”

“This museum is doing amazing things with a shoestring budget,” said Covington, citing the fact that it is a not for profit organization.

“This is not where I go to learn something,” he said, “It’s where I come to get inspired.”

Maria Welych cited her two sons’ active interest in becoming scientists as a success story due to the fact that they spent so much time exploring here.

In a comment dated October 4th, a visitor remarked: “I have been to the MOST all the other times the dinosaurs came and this is by far the best! […] Just another reason we love the MOST!”

When asked for advice to visitors, Covington replied, “Get in here of course,” with a smile, “The MOST is under appreciated. More than just families with little kids, there’s a lot more for older kids and adults. It’s really cutting edge – not something you can get on an iPad, in your living room, or even in a movie theatre; it’s just pure magic.”

A twinkle lit up in each of the developers eyes when thinking about their new Dinomania.