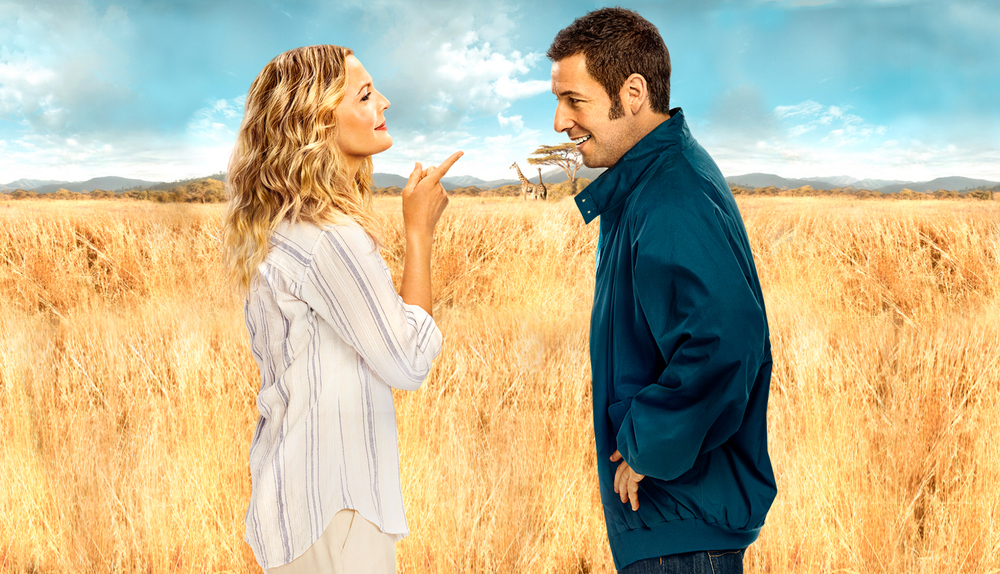 So Adam Sandler’s character wobbles up on his walker and swears to his bored 60-year-old kids that he’s not at all interested in that available same-wing neighbor played by Drew Barrymore sitting at the senior living center social table with her own set of disinterested offspring.

No, not this time around in “Blended.”

Maybe that will scene will come five or six Barrymore-Sandler collaborations and four decades down the line.

“Blended,” the third in the movie world of Adam likes Drew, proves that 16 years after “The Wedding Singer” and a decade past “50 First Dates,” Sandler’s sensitive side still knows how to live harmoniously with his comic chops when he’s standing alongside Barrymore.

In “Blended,” written by Ivan Menchell and Clare Sera and directed by Frank Conrad, Sandler plays Jim, a widowed father of three girls, and Barrymore is Lauren, a split-from-her-cheating-husband mother of two boys.

We meet them on a blind date at a Hooter’s, as disastrous first go-out if ever there was. He can’t look her in the eye, she can’t cut him any slack, there’s food AND drink emergencies, and his bail-me-out buddy call comes before his. How dare he!

Comic conversations are heightened by their work sidekicks, played with just a hint of subtlety by Wendi McLendon-Covey (“The Goldbergs”) and complete cartoonish but lovable buffoonery by Shaquille O’Neal.

It turns out that Jim’s big boss at Dick’s Sporting Good’s — Dick, what did you think? — is dating McLendon-Covey’s character’s Jen. But she squashes a romantic getaway vacation he has planned for them to Africa at his revelation that he’s got five children. Dick sells one half each of said trip to Jim and Lauren, who of course do not know this until they meet in the lobby for this “Blended” getaway.

What a nightmare! They are convinced at once, she the ultra-organizer whose business puts together people’s closets, he the manager of a sporting goods store who named his middle daughter Espn — yup, think cable sports TV — and still brings all of his daughters to his barber shop for their haircuts, even the 15-year-old.

Yes, there is the silly slapstick stuff you’d expect from a Sandler comedy.

He puts her rambunctious youngest son on an ostrich in a ring, with him, in a see-who-rides-longest contest, much to her horror.

She parachutes pulled by a jeep at his behest to be bold. The jeep runs out of gas, much to their horror.

And yes, there is the heart-warming stuff that made “The Wedding Singer” and “50 First Dates” both work as their characters discover the yes-no-yes-no of each other’s personalities.

Throw in the needs and demands of their children, and everybody grudgingly likes eating at the same vacation table before the week is over.

And Sandler and Barrymore now have scored three movies in a row with a big, beating heart.

There are obstacles to overcome, of course — Lauren’s smarmy ex-husband Mark, played as a really cocky SOB by Joel McHale (“Community”) and a house band that won’t go away, led by by muscle-bound Terry Crews (“Brookyn Nine-Nine”). But plenty of people are rooting for them, including their kids and most everybody in the theater.