Ulf Oesterle was working toward his Ph.D. at Syracuse University in 2003. His dissertation would focus on the impact independent labels had on the music of their artists. Oesterle envisioned working for a bigger major label down the road; after all, he had already studied media management, mass communications, music and marketing and worked extensively in radio.

Yet in September 2003 he started an independent label just like those he was studying. Aux Records was born with the hope that Oesterle could use his music and media know-how to help potential bands reach the next level. Now, just more than 10 years later, he’s done just that.

Several of Oesterle’s bands have appeared on MTV, made it onto the Warped Tour and performed around the United States. The label’s list of releases is impressive, spanning everything from acoustic singers and songwriters to punk to metal-core. Oesterle and Aux artist Safe also recently released vinyl for the first time.

“I could have easily gone into this and lost a whole lot of money on the first record,” Oesterle says. “But I didn’t. It turned into more records and successes over the years.”

That first record, Merit’s 2004 release When We Fight, led to the band hitting heavily in both college and satellite radio airwaves. Oesterle proudly sees himself as “the fifth member” of Merit’s quartet. 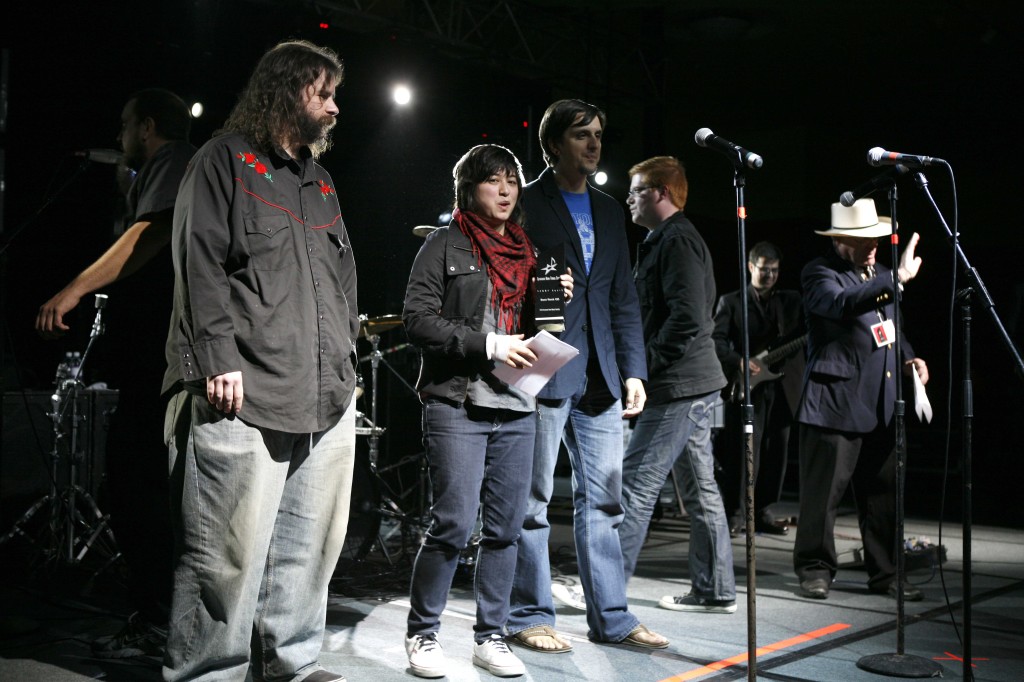 “I approach it as a manager,” he says. “I always looked at the band as the entity you’ve got to focus on. I try to be fair and recognize they have to be successful to keep making music. The traditional labels deals don’t work. There’s got to be incentive for everyone.”

Much of this real-world knowledge and experience goes hand-in-hand with Oesterle’s position as professor and department chair for the Bandier Program at SU. The program, started in 2008, focuses on the business side of the music industry, grooming students to work as managers, promoters and, appropriately, label owners.

“Teaching is part of the reason I keep the label going,” he says. “By teaching, you have to be informed on what the industry is doing. I don’t think this industry is textbook-based. Things are changing so fast. If you don’t have your ear to the ground, I think students miss out in the classroom.”

Oesterle’s students do not get involved with the Aux label, because Oesterle views it as a conflict of interest to grade students working for him. Yet there are plenty of networking benefits for students when they attend festivals like South by Southwest and the CMJ Music Marathon. Graduates of the Bandier Program have incredible placement rates, usually between 85 percent to 100 percent, and Oesterle has the connections to help his bands reach the next level.

“I want to get bands to the point to pass them onto someone bigger,” Oesterle says. “They can say they started with me.”

That happened with Honor Bright, a five-piece punk band that was later signed to Triple Crown Records. “We did a really good job of getting them to the point where we were that stepping stone,” Oesterle says.

Today, Oesterle seems equally content and amazed that the label is still going strong. “It’s been a fun ride,” he says. “I didn’t ever expect to go 10 years with this. I often think that some of these releases, that music, might never have gotten out had I not been a part of it. So that’s a really cool feeling to have, knowing that the label, however popular or not it is, has some sort of legacy now. Those releases, you can never take them away. I love that I was part of it all.”

Bands/artists Oesterle works with at any given time