Joan Applebaum‘s acrylic does a nice job of depicting the annual green beer parade held on Tipperary Hill several weeks before St. Patrick’s Day. She integrates adjacent buildings and the parade action, leading a viewer’s eyes from the quilts of pipers playing music to other sights, including green balloons, afternoon shadows resting on pavement and a singular stoplight with the green light on top. 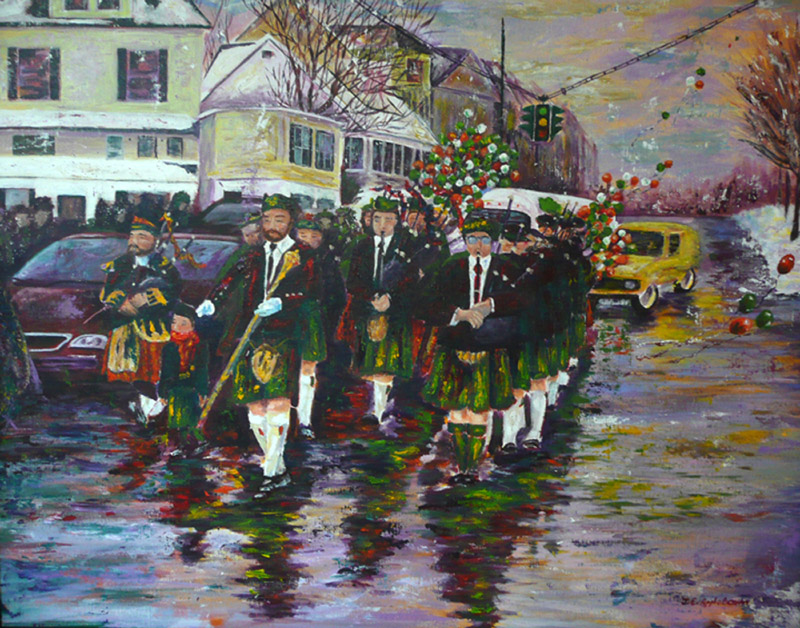 Across town, Theresa Barry‘s digital images portray local celebrations of World Refugee Day held during 2011, 2012 and 2013 at a site just off North Salina Street. Her photos tightly focus on participants and connect them to North Side neighborhoods where thousands of refugees live.

Ashley Marie Barrett‘s acrylic portrays rolling fields in a reddish hue, just below greenish forests and a hilltop. “Country,” an oil by Gail Simon Reynolds, blends lush colors, fences and a road that’s a minor element in the work. 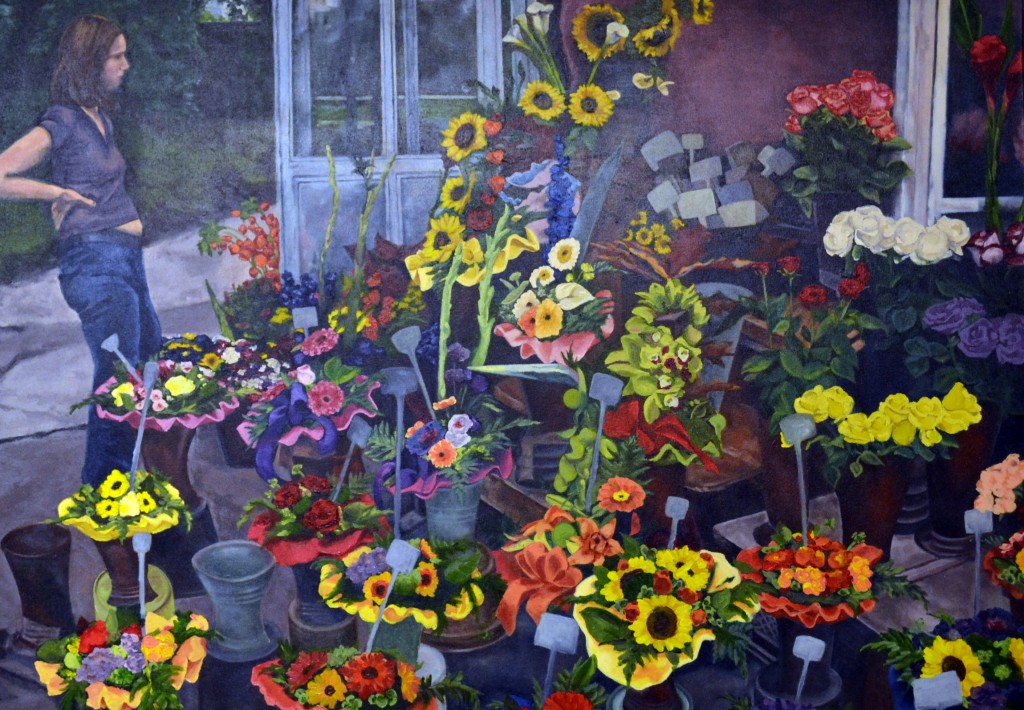 Chris Ennis‘ “Shadow Harvesters of the Autumnai Swamp” highlights a very different scene. Pumped-up orange and red colors, thick, tangled vegetation, and ravens hovering ominously all communicate a sense of a place dominated by creatures and forces best avoided. Much of the work’s impact comes from implication; there are no monsters from central casting.

Other artworks support the notion that curator Steve Nyland has cast a wide net. Adrianne Lynch has several of her spray paint-on-board works on display. “Star City,” “City of Light” and “City Blues” all reference urban architecture. And Doreen Simmons has contrasting acrylics in the show. “Winter Bench” depicts a scene dominated by ice and show, while “Lake Lantern” captures a placid summer day on Skaneateles Lake.

Kathryn Petrillo plays off the notion of three figures or stages, a trio or trinity. “Three Women” doesn’t portray a grandmother, mother and daughter as separate characters; instead, they merge together. “Three Muses,” meanwhile, touches on past, present and future. 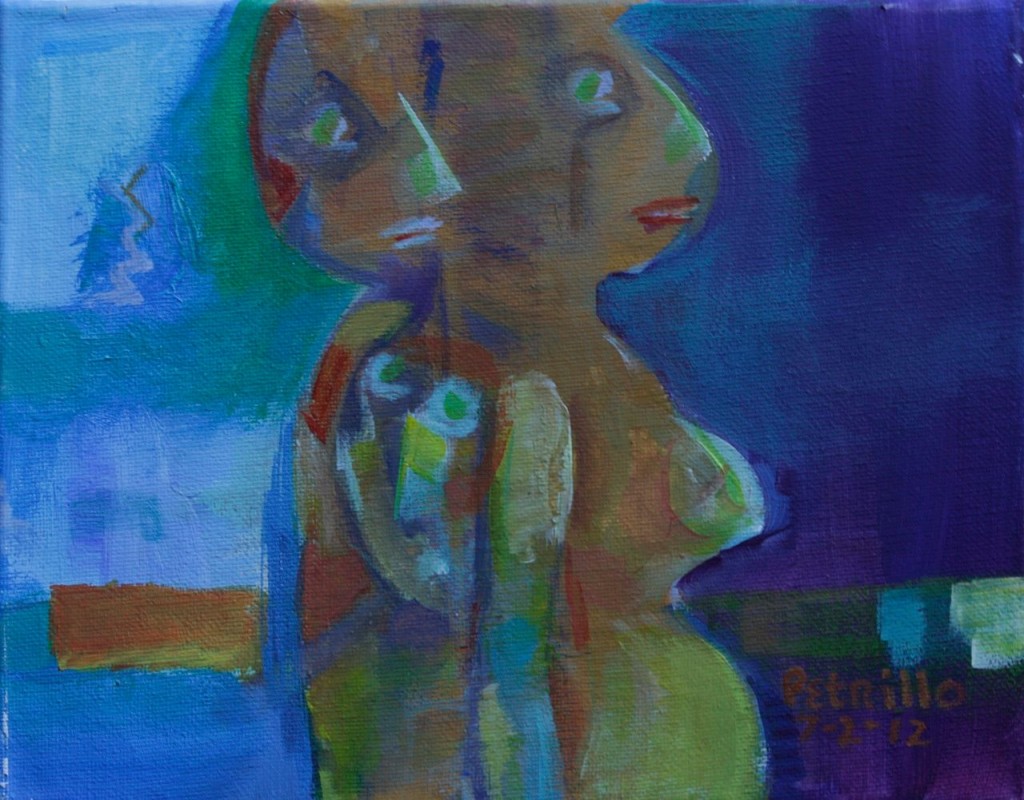 Yet another segment of the exhibit draws from the portfolios of two local photographers. Willson Cummer‘s four images portray woods close to his home in Fayetteville. They’re part of a series focusing on the relationship between people and nature in Central New York. In particular, that project explores the role of parks on a visual and conceptual basis.

Ray Trudell‘s “Upscale Rents or Out of Work,” a photo with a sardonic title, depicts an abandoned building with a non-functioning hydrant near it. The work suggests that even as development takes place, buildings, and some neighborhoods, remain neglected and left behind. “Gemtails at the Crept,” a fine image, captures a cemetery scene featuring an elaborate memorial. 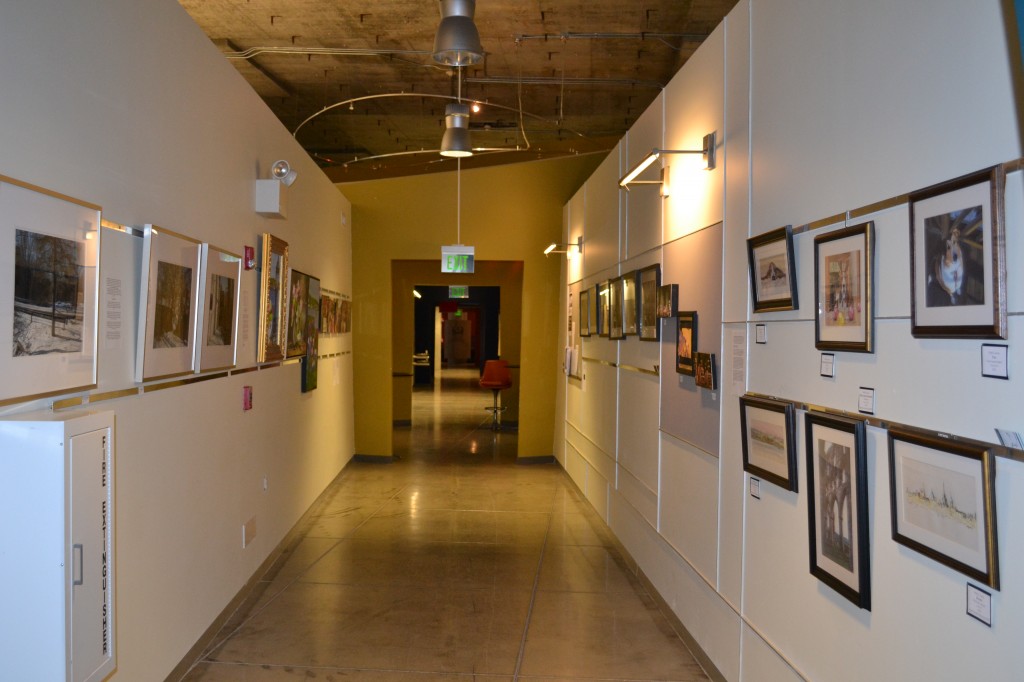 This is a large exhibition with other interesting works: “Sherry’s Storm,” a pastel-and-chalk-on paper created by Sherry Spann Allen; Ennis’ “Sirens,” with an otherworldly feel; “Rievaulx Abbey Yorkshire,” a watercolor by Holly K. Austin. These and other pieces build a successful show, one featuring artists who have exhibited extensively and others who haven’t yet had that experience.