So when the Syracuse Chiefs’ restructured Board of Directors made Smorol an offer last fall to become the team’s general manager, Smorol couldn’t refuse.

“When I’m going to that interview with the Syracuse Chiefs, if they like me, I’m taking that job for the challenge of it,” Smorol said. “And this is a challenge.”

He’s got that right. Tex Simone, who has been credited with saving baseball in Syracuse, resigned in September as Executive Vice President and CEO after more than 50 years with the team. John Simone, Tex’s son and the Chiefs’ GM, was fired by the board a few weeks later.

Smorol, who grew up in North Syracuse and lives in Liverpool, inherited a franchise with a history of poor teams (no playoff appearances since 1998), dwindling attendance (an NBT Bank Stadium low of 345,047 in 2013), and a fiscal report that showed a stunning loss of nearly $1 million in 2013.

Smorol said his first task is improving the fan experience, from tried-but-true promotions such as Dollar Thursday and Fireworks Fridays to out-of-the-box promotions such as Tattoo Night on July 1 (get a Chiefs tattoo and get a free ticket for life) and Wedding Night July 17 (a couple will get married as part of Good Morning America’s “Epic Wedding Showdown”).

“It’s going to take a little while to get this thing right,” Smorol said. “But it starts by listening (to the fans) and wanting to listen and wanting to change.”

Smorol recently sat down with New Times reporter Matt Michael to discuss why this is his dream job and how he’s going to make it work: 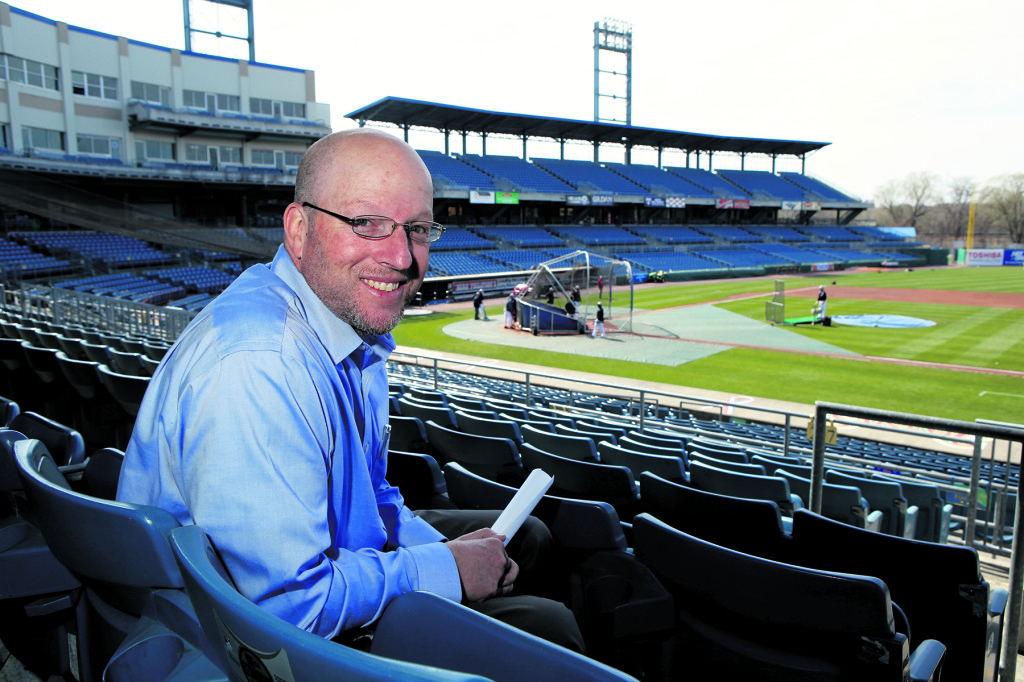 You’ve said that this is your dream job. Why?

If you’re from Syracuse, and there’s a Triple-A franchise named the Syracuse Chiefs that you grew up with as a kid, and you want to keep working in baseball, specifically Minor League Baseball, that’s the job you want. I love Syracuse. I love Central New York. Put everything all together, and that’s your dream job.

Had you given up hope that you’d ever have this job?

I never thought I’d get back into baseball. I was living a nice life with my family (wife Rachel, daughters Julia and Mary, and three dogs). And I had a great job (as an account manager for Hilti, a construction equipment supply company) that provided a great work-life balance that you don’t have in baseball. And that’s one of the reasons I got out of baseball; I was married, and we had a little baby girl and another one on the way and I had to be at the house and help my wife out. Now the girls are a little bit older, we’re in a little different position and the opportunity presented itself – and I still got a little gas left in the tank!

What are the top three challenges you’re facing?

No. 1, changing the culture on what our mission is, what we want to do, how we want to get there, and who we want to be. No. 2, building a foundation for the future. And No. 3, re-engaging with the community, with the fans.

You were put in a difficult spot replacing Tex and John Simone. What would you like to say about the Simones?

Tex is a legend in baseball. They put their heart and soul into this place, and it wouldn’t be here without them. And they deserve all of the honor and respect for everything they accomplished. Tex was very helpful to me while he was around here (this past fall). I’ve always been friendly with those guys, they’ve always treated me well and I’ll always treat them well.

I was there on Opening Day and the word I’ll use is that it was “welcoming.” Talk in general about what you’re doing to get that feeling in the ballpark?

You can’t just say you’re going to welcome them, you have to welcome them. So “Thank you for coming,”  “Welcome to the ballpark,” and “How are you doing today?” and “What’s your name?” and “Where are you from?”  Just get to know the fans a little bit.

Is there a common thread to what you’re hearing from the fans?

They wanted the radio back (it is – on The Score 1260 AM). They wanted value – more promotions, more fireworks, more giveaways. But from Opening Day on, what I am just amazed at is they’re just happy. They feel that welcoming spirit. They tell me it’s like a breath of fresh air here. There’s a sense of a change, a feeling of a change. It’s unbelievable, they’re thanking us, and we should be thanking them.

You’re not giving away free tickets like the old regime. Why?

We have a value, and it’s either $12, $10 or $5. To me, let’s give everybody great value and be welcoming, get a giveaway item, have fun, talk to people, get to know them. At the same time there’s great baseball going on. I still think that people like to watch a baseball game.

Speaking of baseball, you re-signed with the Washington Nationals as your major-league affiliate (through 2018). Have you talked to the Nationals about what they can do to put a winner on the field?

I don’t have that conversation with them because you know what, (Washington’s) Ryan Zimmerman got hurt and (the Chiefs’) Zach Walters goes up and he’s had two home runs in two days there. That’s the nature of the beast; you fight through it.

We need to average 3,500 live bodies in here to cover the nut. And that’s my job. When we win, that number is going to go up due to nothing that we’re doing. And when we lose, I still need to get to that point. We’ve got to be able to live through the bad weather and the bad teams and still make it an experience for mom and dad and the kids so that we can keep baseball here to do all of the good stuff that we can do.

Former New York Yankees star centerfielder and Latin Grammy-nominated guitarist Bernie Williams will appear at NBT Bank Stadium on Father’s Day, June 15. Williams will sign autographs before and during the Chiefs’ 2 p.m. game and play the national anthem. That night, Williams and his All-Star Band will play a concert at the Landmark Theatre.