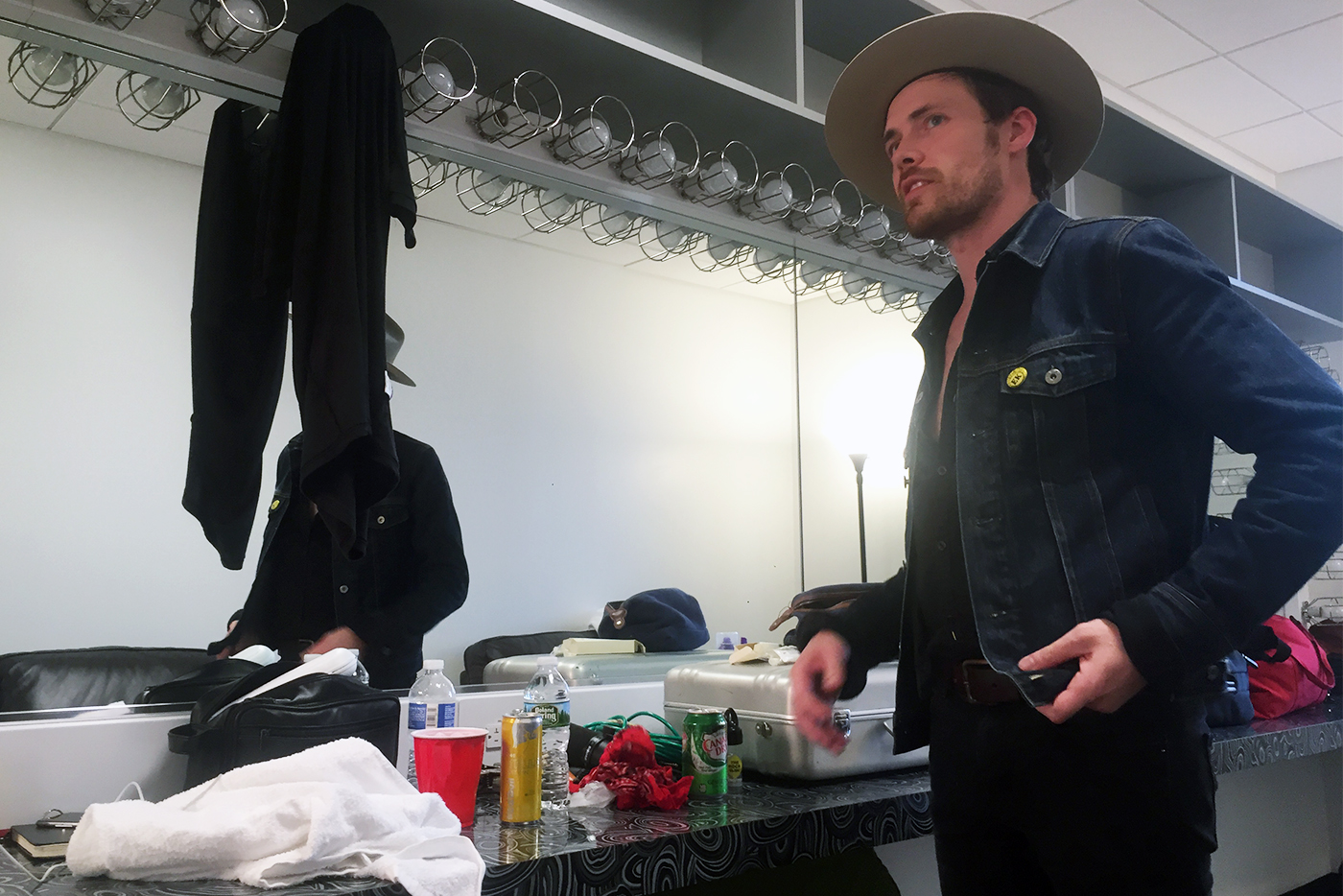 In the Lakeview green room with up-and-comer K Phillips.

Americana rock musician K Phillips stands near the Lakeview Amphitheater‘s merchandise booth when he hears headliner Rob Thomas, nearing the end of his Aug. 12 set, ask the audience “Did you guys like K Phillips?”

This kind of endearing remark, coming from an artist on tour with Thomas and Counting Crows, might seem disingenuous. But there is nothing about Phillips that suggests he is ever anything but honest — with others and himself.

Phillips and his band, the Concho Pearls, opened the Lakeview concert with 30 minutes of punching country rock. He’s not sure if his music warrants the “country” label, however.

“Do y’all think I play country music?” he asks earnestly, leaning on a counter in the band’s green room.

It’s a hard question. The music he performs certainly has Southern influences, which makes sense: He grew up in country-music-soaked Texas. “Ramble,” a song from the band’s first album American Girls, is a parody of every song from the genre with elements of male bravado. Interestingly, a reading of the e.e. cummings poem “the boys i mean are not refined” accompanied the song at Lakeview.

So can a performance that includes something you might study in a college English class be classified as country? But, as Phillips points out, “What is country music other than storytelling?”

Phillips brings focused intellectuality to how he conducts himself onstage and off. His main concern once the show is over is how he came across when he attempted banter with the audience. He explains that their set had to be exactly 30 minutes, so padding the performance was necessary. And they still went one minute over.

“We were three minutes early, we were one minute late,” band member Hannah Cook says, shrugging. “We might have talked a little bit too much and been a little too slow, but …”

Phillips insists, “But I don’t want to talk. I just want to play.”

He doesn’t have to worry: K Phillips and the Concho Pearls are an opener you’d be glad you didn’t skip out on. While Phillips, center stage on the piano for most of the performance, is a commanding presence, his band also shines, as Cook sings along with smoky charisma.

This road trip is particularly special for Phillips: Adam Duritz, Counting Crows front man and Phillips’ friend, asked him to open the tour. The alt-rocker also helped produced Phillips’ latest album Dirty Wonder, as well as covering one of his tunes, “Kat’s Song (What I Can’t Have),” at New York City’s Bowery Electric.

If performing his own music is Phillips’ biggest passion, other people performing his songs follows just behind. At Texas Lutheran University, he studied journalism just so he could have writing experience. Fast-forward to today, and he has collaborated with songwriting heavyweights Ron Pope, Duritz and John Hiatt.

“It’s tough, because I like writing for other people, but then they’ll change a word, and I’ll be like, ‘I gave you a perfect song,’” he says with a laugh. “But then sometimes I’ll listen to what they’ve changed it to, and I’ll be like, ‘Oh, yeah. This is a hit.’”

He insists songs he’s writing with Pope right now are ones people will soon be familiar with after their release. That may be entirely possible: Phillips’ studied way with words brings a welcome departure from the mundane “bro country” that resides on the Top 40 charts, with his stories that range from dark to sweet to hilarious.

Although several people after his set run up to shake Phillips’ hand and tell him variations of “You rock!” outside the venue, he is still convinced that this night’s performance was not their best. Maybe that’s what makes him a genuinely likable person. He doesn’t evince false modesty; he knits his brow and repeatedly asks everyone who passes through the green room, “That was good, right?” They all assure him that it was, but he doesn’t seem convinced.

The audience would have never known he had any worries about his performance. The man played his selection of songs with an assured smoothness, with strong, thumping backing from the band that had people standing up and clapping.

K Phillips put on a good show. But it’s his offstage demeanor — the way he can laugh at himself, talk poetry, and wonder how to better his performance — that makes him an artist worth knowing. If all these qualities bleed into his music, and they do, there can only be better things to come from the artist.