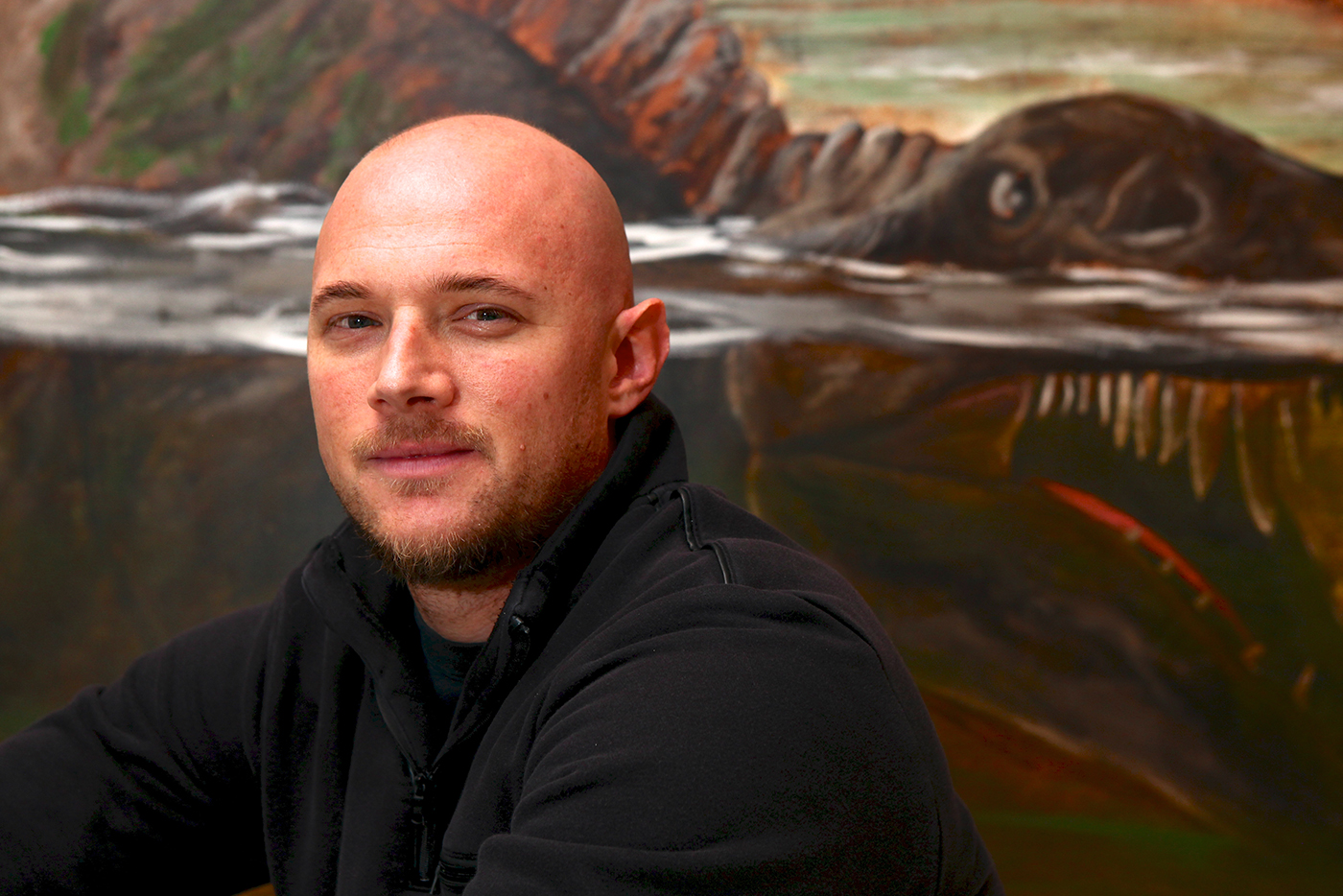 A Nose For Hues

Colorblind muralist Michael Weismore relies on instinct for his artworks.

Michael Weismore sat on the sofa next to his dad, in his usual recliner, cocked back, with the remote in his hand. “Put the football game on, Dad,” Michael said.

“Hold on a minute,” his father said. “I’m watching this guy paint.” That guy was Bob Ross, the famous landscape artist with the large ’fro, who hosted the long-running PBS series The Joy of Painting. In this episode he was painting a cliff scene with a roaring river, as Ross pressed white and blue pigments to outline a wave. 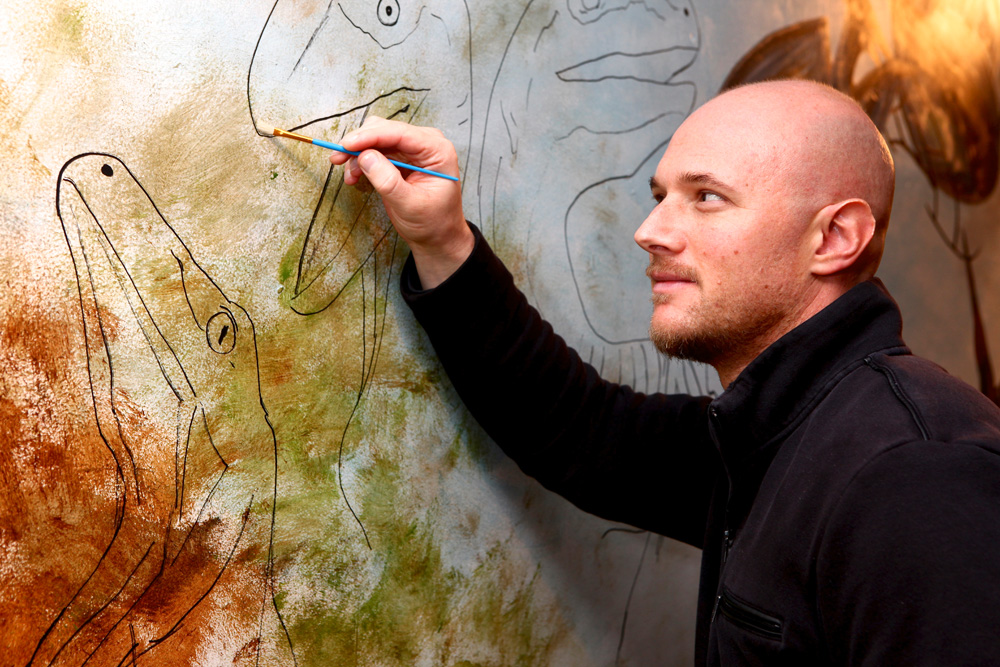 “I can do that,” Michael Weismore said.

“I can do that,” Weismore insisted.

That moment was eight years ago, when Michael Weismore, 34, wanted to become an artist.

Weismore did not go to art school, although he learned perspective, light and color theories from studying art books he collected over the years. Color theory did not come easily to Weismore, and not because there are thousands of hues to learn. Weismore cannot see color at all.

Diagnosed with colorblindness at age 8, Weismore has trouble seeing most hues. “I cannot tell one color from another: browns, greens, blues and purples. I cannot tell between red and orange.”

Instead, Weismore distinguishes colors from how light or dark they are. He can also see colors that are more vibrant.

During an interview, he points to a dinosaur he created in his son’s bedroom. “I can tell this color is a bright blue,” Weismore said, noting the dinosaur’s spots. “But I can’t tell what this is,” pointing to the coral color on the rest of the dinosaur’s body.

He brought his first paintings to the Central New York Regional Market in 2008. Out of the 25 pieces, 22 sold. “I was shocked that I left there with a wad of cash,” Weismore said.

Weismore is influenced by children’s television shows and toys. He said his pieces evoke a jovial vibe because of the lively colors he uses. 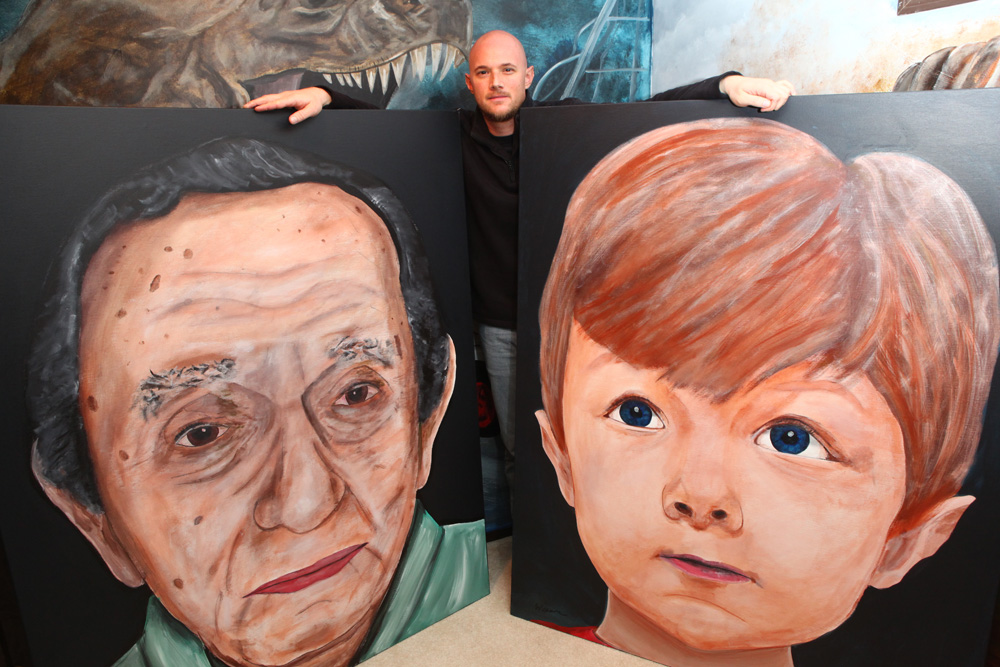 Although Weismore is colorblind, viewers cannot distinguish it in his work. It is not always pure luck, however, as he receives help from his family.

“I ask a lot of questions,” Weismore said. “I text my wife a picture of what I am painting and read the (paint) labels.”

Weismore’s colorblindness has not stopped him from pursuing his art. His frequent buyers wanted larger works such as murals, but Weismore was initially reluctant. Finally giving in for a Pulaski client, Weismore created his first mural for a nursery. 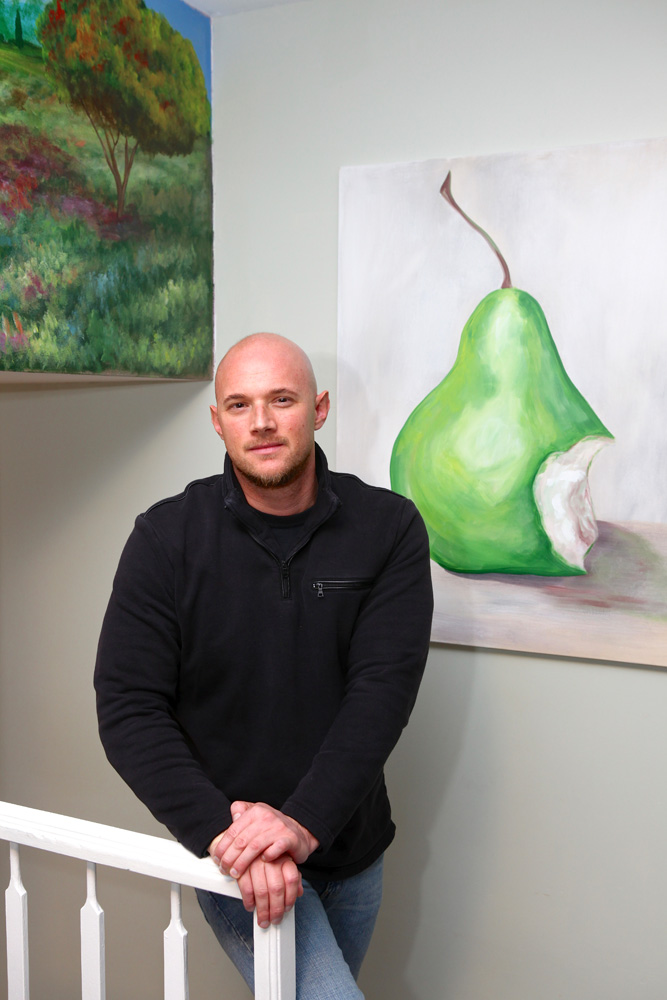 “It was just like painting on a small canvas,” Weismore recalled, “but just on a bigger scale.”

After finishing OCC, Weismore worked at Bank of America while starting his small portrait business. Five years later, Weismore said business picked up so much that there was no need for his second job: He was a full-time artist.

Weismore was referred by his clients to organizations and businesses seeking artwork, such as the mural that adorns the Arctic Island ice cream shop in Syracuse’s Valley section. He also donates many of his murals, such as the ones he created for the Sunshine Campus. Tracey Dreisbach, executive director of the summer camp created by the Rochester Rotary for children with disabilities, recruited Weismore to paint inside the new sensory building for Sunshine’s participants.

Weismore created four murals: a mountainous landscape, an aquarium scene, a superhero turtle, and a tree scape. The children go to the sensory building to regroup from a stimulating day at camp, Dreisbach said. “The mountain mural soothes the kids after a long day of activities.”

For the Oneida Family YMCA, multi-team leader Stephanie Neff enlisted Weismore after the organization’s CEO noticed one of Weismore’s murals at a neighboring business. Weismore created an underwater scene of people swimming inside the Y’s pool-viewing room. The children in the painting had goggles on, Neff added.

“(The mural) brightened up the space and gave it life,” Neff said. “Our members were excited about it because it was something new and beautiful.”

The mural is an outer-space scene, inspired by the center’s star logo and incorporates vinyl stars that the children can draw on and stick onto the wall. “They (the children) are thrilled,” Cleary said. “We have law enforcement officers who work with us that help the kids put stars onto the walls.”

The positive reactions from the children have prompted Cleary to invite Weismore back to paint the center’s four other interviewing rooms in the center, each with a different motif.

Weismore is not just a muralist. Recently dabbling in sculpture, Weismore uses concrete as his medium. He has an abstract three-dimensional sculpture of a mermaid sitting on a rock in his backyard. Mainly focusing on his murals, Weismore said he is sculpting only as a personal project.

Weismore’s services can be found through his website, cnymurals.com. He has painted all of his projects alone, but said he enjoys receiving help with color choices when he cannot distinguish one from another. The artist said he works with his own knowledge and imagination to pick the right colors.

“You can work around it,” Weismore said. “Like you know grass is green.”

Hailey Clark is a graduate student in the Goldring Arts Journalism program at Syracuse University.