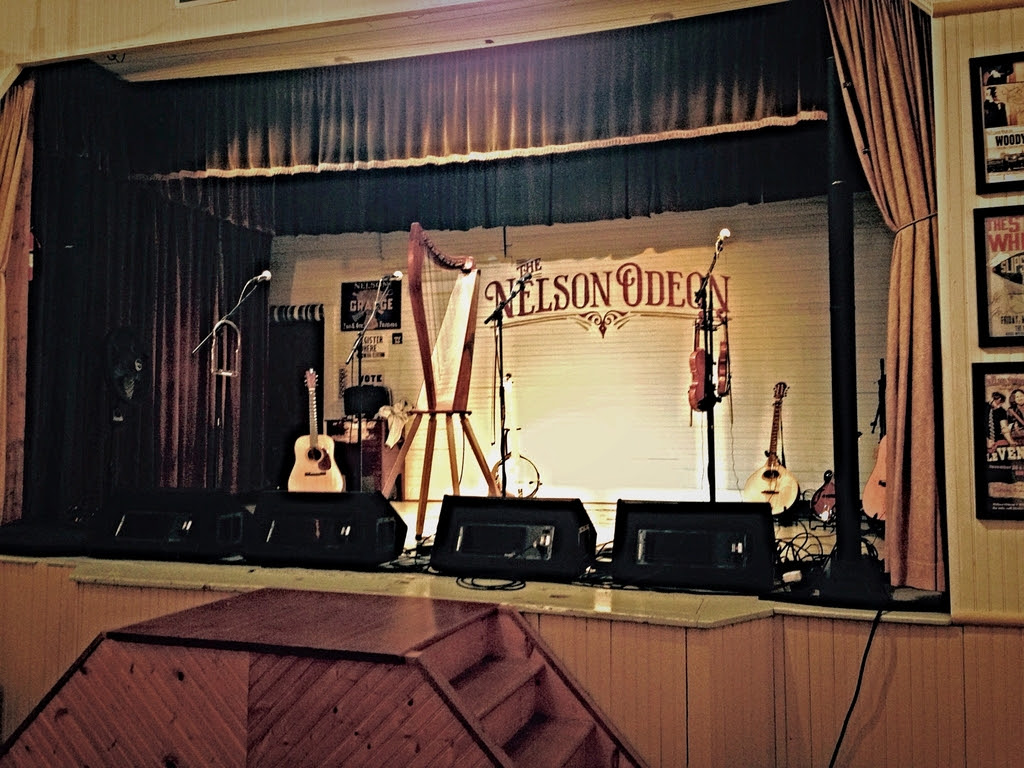 Patchy Sanders fits in well at The Nelson Odeon

Patchy Sanders is not doing anything new, and the band has not made any noteworthy changes. Folk, storytelling and stringed instruments have been around for centuries. They’re simply staying consistent as they define its presence within the genre of orchestral folk.

At this point in the early 21st Century, there have been implications with performing as a band to showcase a distinct folk sound. Bands such as The Avett Brothers, The Lumineers, and Mumford and Sons have jumped on the foot-stomping wagon and commercialized the style. The latter, after a hiatus stemming from a preconceived fame-based burnout, have abandoned the style with its latest major label, yet classified “indie rock” effort, Wilder Mind.

The up-and-coming sextet (performing as a quintet this tour) continues to play out on the road. The band’s stop to The Nelson Odeon last Friday, Nov. 6, is not only one of the many on its first east coast tour, but it’s one of the smallest. The venue is a historical grange, and has a significant voice and determination to bring in local, national and international talent. The walls are decorated with numerous posters of performances past. Patchy Sanders said they felt right at home. 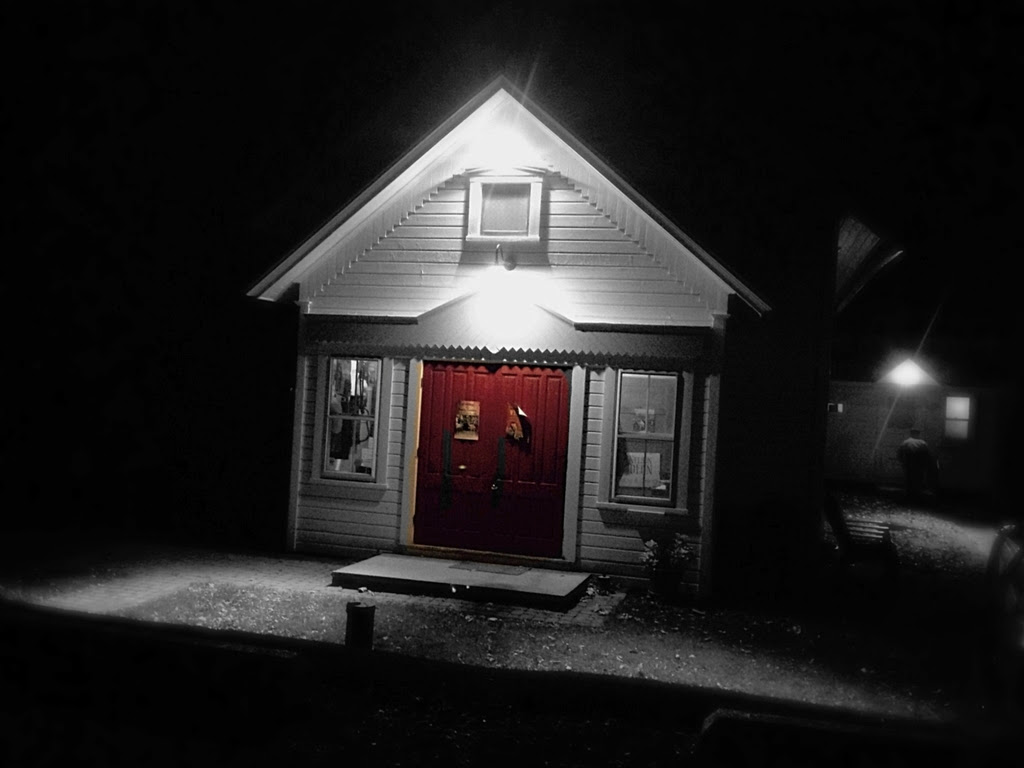 “For a small town, this was an incredible audience for us,” said violinist and Alaska native Sara Wilbur. She was discovered at an Ashland, OR, farmers market, and it was obvious to see why the four core members decided to bring her aboard and add to the band’s sound with her melodic and mischievous style.

To give an idea about the atmosphere and overall performance: The grange hall ended the evening with a standing ovation. Guitarist and vocalist Dan Sherrill said this aspect, what he calls the “feedback loop,” adds to and makes or breaks a show.

“The feedback loop … is the reception from the audience that we equally give back. It’s co-creation of the space.” He paused, smiled. “This happened tonight. It was freakin’ amazing. Some shows we have to manufacture a little magic for ourselves when there isn’t that feedback.”

For Sherill, the tour is a bit different: His roots are here. Along with the Aubert sisters, Danielle and Jacqueline, the three band members are only a short distance from their hometown of Downingtown, PA, which is about an hour away from Philadelphia. Ian Van Ornum, who picked up a variety of stringed instruments throughout the show to compliment his vocals, hails from Minnesota. Sanders’ bassist Eric Jones is the only native Oregonian; he was unavailable to tour.

The Northeast is special to them. Aside from their roots Danielle Aubert lived in Ithaca; Sherrill in New York City. To parallel the band members’ scenery changes, Patchy Sanders has blended experience in rural and city life, American history, and contemporary topics and have infused a great deal of nature into its melodic art. Being autumn, the changing leaves and vibrant scenery brings back memories of their east coast past.

This week they’ll be spending time in their home state. Maybe they’ll take some time to let their on-the-road adventure sink in, and material will generate from it. From Central New York, they traveled through Pennsylvania. In these next few days, they’ll cover territory in Virginia, North Carolina and Tennessee.

While on the road, Wilbur and the guitarist said their soundtrack has been Roots by Alex Haley, and that each of the members have diverse influences. They have a connection with American history, especially with that of the Underground Railroad. Many of the songs contain lyrics alluding to the 19th Century movement to get slaves to safety. For music, collectively, they value Joanna Newsom. Her style, her long-ended folk songs and short, whimsical pieces as the band describes them, are intriguing.

“The music is thematic and it evolves over the course of 10 minutes. Man, each minute is a little morsel,” Sherrill said. “We can create this with the instrumentation that we have.” 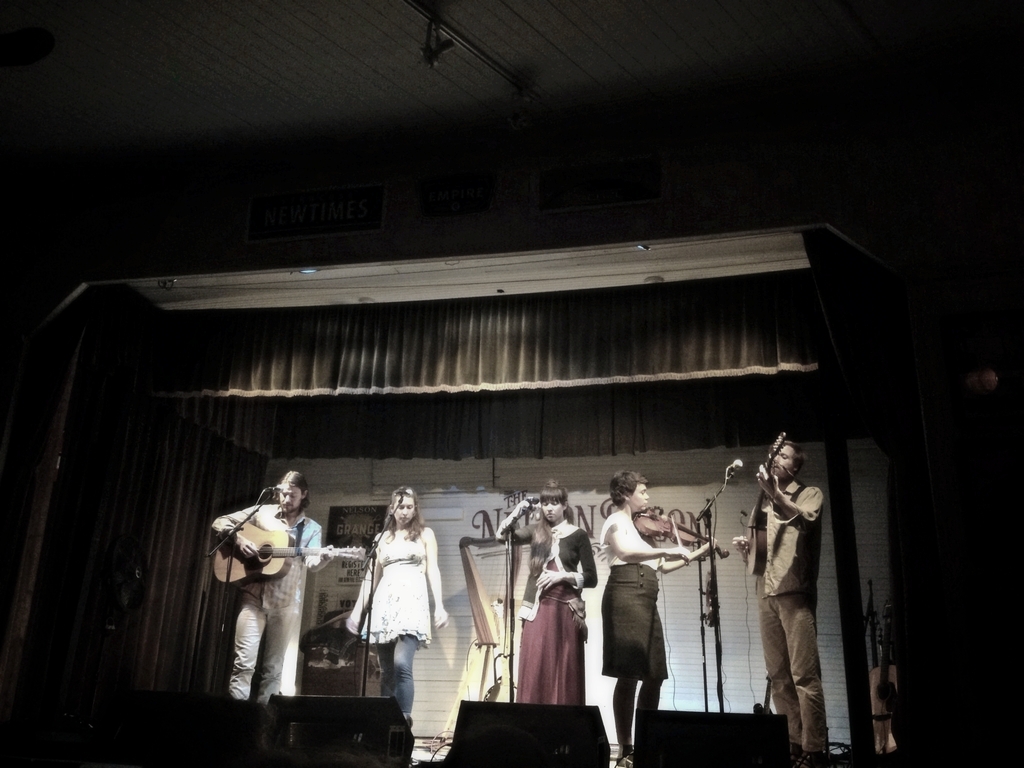 The band exudes instrumentation, and not once did the five performers play over each other. Its roles have integral, the instruments have intricate parts. The Aubert sisters especially compliment one another, and their vocals are poignant. Shadows were never cast over any instrument. Danielle’s banjo and Van Ornum’s mandolin performances do-si-do with each other. The violin aptly weaved the songs together; Wilbur’s ability personified a ribbon to tied the band together.

“It doesn’t seem strange to me to have long songs,” Wilbur said. She pointed out how often three-minute songs are found in folk.

“Chaunti Sea,” is the of the batch of songs, and is found on its album, “Patchy Sanders & The Wild Peach Forest.”

The majority of the band’s songs exceed four minutes in length. Even with its own whimsical tune “Mandoline,” they extended the song simply by the feedback of the audience. The instrumentation may be there, but the song is over before a listener can fully digest the message or story. Oftentimes, the repetitive chorus outweighs the verses. The chorus is essentially the catch; it’s the stanza of words that listeners belt out in the shower or while driving. The choruses Patchy Sanders produce are nothing short of catchy, but a lot has to be said of its lyrics.

“Ancient Ancestry,” “Ancient Ones” and “Whistlin’ Bird Blacksmith” all dance around the seven-minute mark. As the titles imply, they do incorporate allusions to abolitionism.

Sherrill continued, saying that people should take a deeper look into the lyrics. The words are as much a page out of the journal of their own lives, and the words should be embraced by the listener. They’re words to hopefully inspire.

“We know the overt meaning for each song, but performing it is new every time,” she said.

“Sometimes it happens that we have so many ideas. We’ll take a 12-minute song and figure out where we can parse it down to get to the real juicy stuff,” said Wilbur.

The long-form artistic folk music is something each of the bandmates embrace. They respect and hold true to traditional folk, but they also want to push the envelope to what songs can be.

“We have a vision of being free. There are no boundaries to what we can create,” Sherril said. “It’s been a full-on journey.”