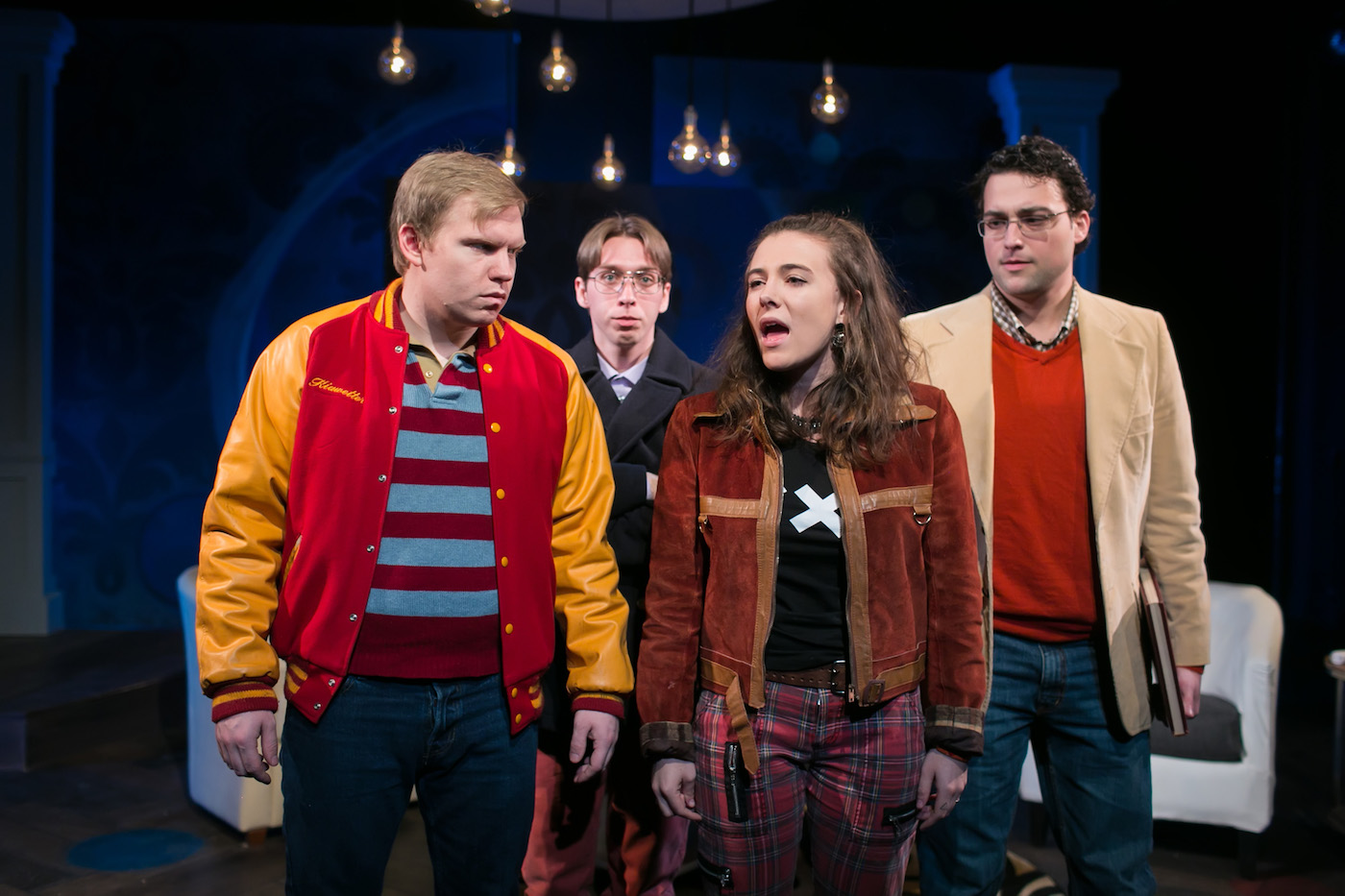 A fashionable Central Park address. High-stakes art dealing. A paralyzing fascination with celebrityhood. Ungrateful, spoiled children. Tensions over status, gender and race. All set in motion by a smooth-talking con artist whose victims can’t let go even when his scam is exposed.

That may sound like thematic overload for a 90-minute, one-act comedy-drama, but not to worry. John Guare’s Six Degrees of Separation, running through Saturday, March 18, at the Redhouse Arts Center, not only contains some of the sharpest dialogue of any American stage work of the last generation, but it will keep you and your party buzzing for an hour after the final curtain.

Director Vincent J. Cardinal, a faculty member of the University of Michigan, gives away the plot in his program note: The central episode of the first half of the action actually happened. An articulate African American young man with no money wheedled his way into the apartments of socially elite New Yorkers, including composer Leonard Bernstein. He said he was the son of Sidney Poitier, who fathered only daughters.

That happened in the 1980s, and Guare’s play opened in 1990. Technological changes since then, specifically smartphones and Google.com, would have protected the victims. That does not mean the brilliance and appeal of Six Degrees is in any way diminished.

In life, even people living at Central Park South do not speak as well as art dealer Flanders “Flan” Kittredge (John Bixler) and his wife Louisa (Laura Austin). They’re preparing to go to dinner with a friend and potential client from South Africa, Geoffrey (Bob Fullenbaum).

In witty, multilayered dialogue they gallop through a half-dozen topics including how many millions Geoffrey might be good for, the market value of Cezanne paintings, their children at Harvard, and their opinions of recent Broadway shows. A loathing for Andrew Lloyd Webber’s Cats turns into a running joke.

Bursting into this scene is a well-spoken young black man, Paul (Rakeem Lawrence), bleeding profusely from a stomach wound, clearly the victim of a mugging. Even more unexpectedly, he knows quite a bit about the Kittredges, such as Louisa’s being known informally as “Ouisa,” and the presence of a double-sided Kandinsky work in the living room. He plays coy on the big revelation that “Dad” is, yes, Sidney Poitier, now out of town. He needs only an overnight accommodation until his father arrives with some cash.

Guare’s method is often to reveal the truth through action. Paul’s ruse is exposed when a nearly naked rent-boy (Max Smith) comes running from the bedroom. Next we learn how widespread Paul’s chicanery has run when the Kittredges’ friends Kitty (Rachel Torba-Grage) and Larkin (Steve Hayes) reveal the astonishing news that Sidney Poitier’s son had shown up in their apartment right after a mugging. More explosive matters concern the rebellious, aggressive offspring (Grace Allyn, Sean Carpenter and Daryl Acevedo) at those expensive colleges.

Under Cardinal’s direction, the show moves with the pace of a Feydeau farce and could be mistaken for merely an upper-class comedy, like an Americanized Noel Coward. But Six Degrees not only comes with language usually superior to Coward’s but also ambitious, lengthy speeches that could be assigned to elocution contests that hardly any playwright, especially an American, writes any more.

The first of these is assigned to Paul, tracing the malign influence of J.D. Salinger’s Catcher in The Rye, the loathing of “phonies” and the elevation of the authentic self. A second, containing the most poignant words in the play, comes from the young man Rick (Maxwel Anderson), in from Utah with his girlfriend Elizabeth (Marguerite Mitchell), seeking their fortune in the city. Rick admits to succumbing to Paul’s charms; part of Paul’s ruse was to present himself as the black son of a wealthy white racist father.

Guare’s grandest rhetorical flight is Ouisa’s meditation on the meaning of the title, the interconnectedness of us all that allowed Paul to learn through intermediaries so many of the household secrets, and how easily we can deceive ourselves into believing what we want to see. This speech, written for the playwright’s favorite performer, Stockard Channing, affords Laura Austin her finest moment since W;t four years ago.