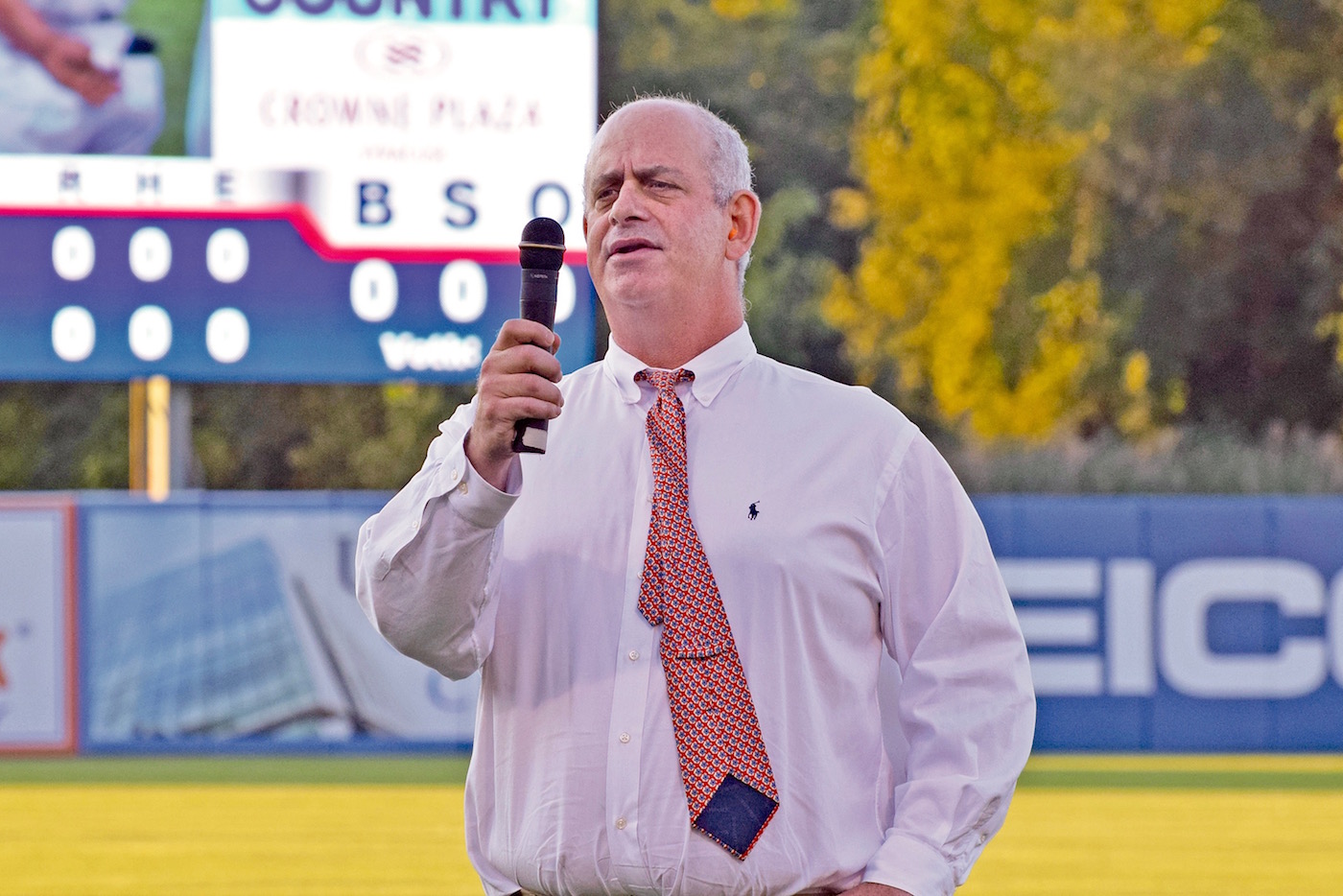 You wouldn’t have wanted to sit for this interpretation of the national anthem.

Maybe you’ve wondered what it’s like to sing the national anthem at a major sporting event, or, barring that, at a Syracuse Chiefs game. Now, thanks to the relaxed, end-of-season musical standards of the Chiefs’ front office, I’m well-versed on that topic, too.

First, let me underscore that it’s a great privilege to sing the anthem, although it comes with immense responsibility. It’s really hard to sing. Between the bottomless trench of “gave proof through the night” and the castrato clarion of “land of the free,” one wonders: Exactly how drunk was Francis Scott Key when he wrote “The Star-Spangled Banner”?

And there’s rum in my hair

Where is my underwear?

100 proof through the night

Oh, and thanks a lot, Colin Kaepernick, for stepping on my big moment. The socially aware 49ers quarterback was spotted refusing to stand for the anthem in San Francisco on the same night, Aug. 26, that I sang it for the first (and probably last) time at NBT Bank Stadium.

Why so much fuss about Kaepernick? In the land of the “free,” we’re free to pass on mass displays of patriotism. That’s a good thing.

Also, give Kaepernick some credit. Unwittingly, like most of his throws into double coverage, he brought attention to a blatantly racist third stanza that many of us never knew existed. We all learned something. Is that so terrible?

That said, while I support the right to not rise for the national anthem, I urge protesters to reconsider when the singer is a non-professional. It’s one thing to not show respect for the home of the brave, but to disrespect the stones of the brave amateur who is out there trying not to hurl … that’s un-American.

The Chiefs did their due diligence. They had me audition at an empty (no, I mean really empty) NBT Bank Stadium. I was instructed to hold the microphone close to my mouth but keep the handle parallel — not vertical — to the grass. I passed.

My only mistake was subbing “Dah-dah-dah-dah-dah-dah” for “And the rockets’ red glare” because I got discombobulated by the stadium PA system’s 1.5-second delay. That’s a common pitfall in this racket.

Undaunted, Chiefs general manager Jason Smorol ordered me to clean up the dah-dah-dah part and locked me in for the Aug. 26 contest vs. the Pawtucket Red Sox, a night made even more special because BirdZerk, “America’s ballpark prankster,” would be in the house. I almost BurstZerked with pride when Smorol allowed that the club had green-lighted far worse singers than me.

My elation didn’t last. While trying to practice the anthem during a bike ride, I realized I didn’t know the lyrics as well as I’d assumed. I kept having to dismount and Google the words. Sometimes I’d sing “broad stars and bright stripes” by mistake. And was it perilous fight or night? Gleaming? Streaming? And what happened to the amber waves of grain part?

As the week wore on, the mistakes diminished, but the possibility that I would freeze under pressure tormented me. My wife, Leigh, and 13-year-old daughter, Lily, added to my angst by waiting until two hours before the first pitch to critique my singing. Their “suggestion” was that I start lower to avoid struggling to reach “land of the free.” When I took their advice and bottomed out on the low notes, they just shook their heads sadly — or laughed.

By the time I arrived at the stadium an hour early I was as nervous as a Muslim cleric at a Trump rally. I sat and watched the groundskeepers, feeling overdressed in my khakis, white shirt and red-white-and-blue tie — like a Mormon missionary at a toga party. A few friendlies wished me luck. Leigh and the girls arrived, a sure sign of big doings. The last time the four of us were at a Chiefs game, CiCi’s Pizza and Krispy Kreme were all the rage on Erie Boulevard.

Everything moved fast and slow at the same time. My family, a bunch of other dignitaries, some no older than 6, and I were led down to the field. Jason stood by the pitcher’s mound with the hand-held mike, shouting a lot. I informed manager Billy Gardner Jr. that I was available for pinch runner duty. He gave me a thumbs up from the dugout.

Jeff Irizarry, Chiefs community relations whiz, brought me a pair of orange earplugs to block the PA reverb. He reminded me to hold the microphone parallel. Jason did, too.

Then it was happening: “Ladies and gentlemen, we ask that you please ….” The green of the field rolled toward me like an ocean as I took the microphone from Jason and headed toward the mound. The crowd was a pulsing blob of animal expectation.

And then, suddenly, I was singing. Not in the shower, not in my car, not belting out “Auld Lang Syne” with everyone else on New Year’s Eve, not clowning at a karaoke bar. I was singing “The Star-Spangled Banner” at a professional baseball game by myself.

I stayed calm and focused. Without even realizing it, at one juncture I shifted octaves to hit my notes. No one seemed to mind. My rendition, several fans would tell me afterward, was refreshingly brisk.

Jason was among those deeply moved by my performance. As I walked off the field to rousing applause, he asked “Why’d you hold the microphone the wrong way?”

Crap! I’d forgotten all about that. As such, my first line was barely audible. Happily, someone upstairs quickly cranked the PA volume, and everything worked out except the final score. The Chiefs lost 3-0 in extra innings.

I’m only a man, albeit a man with a surprisingly not terrible voice. What do you want from me? A base-clearing triple?