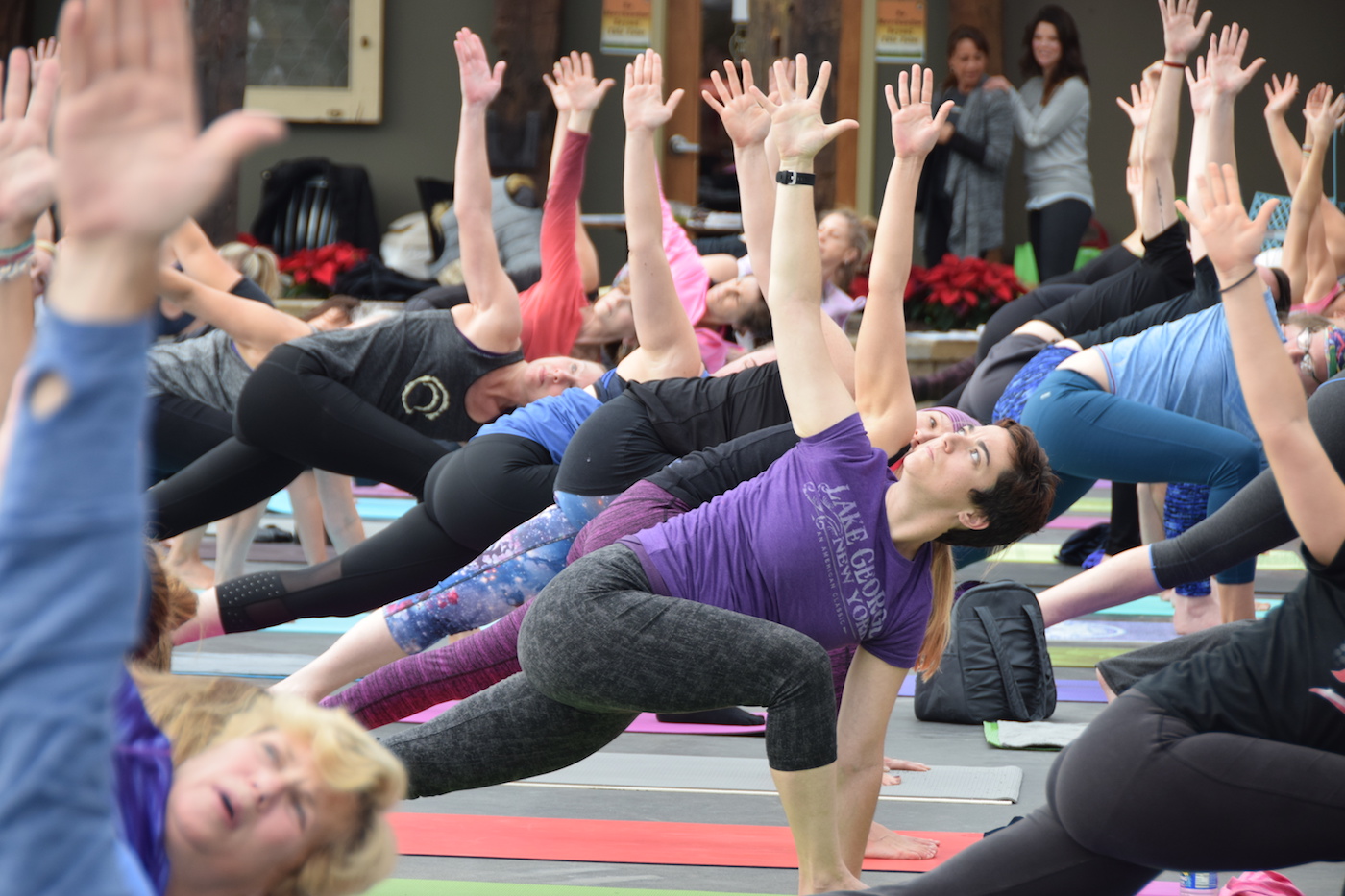 After yoga class, your mind is relaxed. Your body is relaxed yet invigorated. You’re calm and at peace. Leave the yoga studio and it’s back to work and chores and kids and commitments. The transition from bliss to reality can be a jolt.

So why not spend some time with your fellow yogis off the mat, over a craft beer, wine tasting or bite to eat? Yoga purists might scoff, but increasingly, this is an option in Central New York, with yoga classes popping up in places where you might least expect them. One such recent event featured yoga at a soon-to-open shop, Knitty Gritty Yarns, followed by a pint of beer at Stout Beard Brewing Company, both in the Cosmopolitan Building, 1153 W. Fayette St.

Vinyasa flow followed by beer flow? Why not? 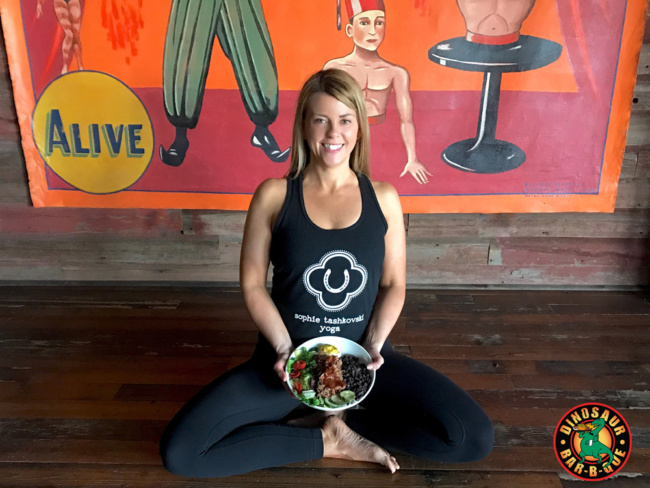 “I really believe in community and partnering with local businesses,” says Sophie Tashkovski, a yoga instructor who has been practicing for 10 years and teaching for six years, mostly in Central New York. She’s a leader in taking yoga outside its usual confines.

Some people, Tashkovski says, are curious about yoga but unsure or intimidated by a studio setting. “I want to give people a reason to try yoga,” she says.

Tashkovski’s mantra is “Yoga for everybody. Yoga for every BODY.” She has led pop-up events in a variety of venues, including yoga and lunch at Aster Pantry and Parlor, 116 Walton St., in Armory Square, and yoga and beer at the Empire Farm Brewery in Cazenovia. Participants register in advance and are asked to sign a release form.

Two of her upcoming events — “Winey Yoga Saturday” at Greenwood Winery and Bistro, 6475 Collamer Road, East Syracuse, and Yoga + BBQ at Dinosaur Bar-B-Que, 246 W. Willow St. — sold out in a few hours. A second event at the Dinosaur is scheduled for April 28; see sidebar for details.

The Greenwood event will feature an hour of yoga, with mats spread out amid the tanks and barrels behind the tasting room counter, followed by a tasting of Greenwood’s wines.

The Dinosaur event begins with an hour of yoga in the upstairs private event space, followed by a meal that showcases a healthy, new menu item. The Black and White BBQ Bowl is a composed dish of black beans, rice, mixed salad, Creole deviled egg, toasted pumpkin seeds and grilled cornbread, with your choice of pulled pork or chicken, beef brisket, tofu or mushrooms.

Tashkovski says her idea for getting local businesses on board with yoga began when she taught classes at a yoga studio downtown and invited participants to continue their fellowship “off the mat” with Yoga Club — food, beverages and conversation at Kitty Hoynes Irish Pub and Restaurant, 301 W. Fayette St. She is in the process of opening her own studio, Syracuse Yoga, in a renovated carriage house at 6181 Thompson Road, DeWitt, but plans to offer more yoga events in nontraditional locations. A large event, Yoga in the Vines, is planned for June 17 at Owera Vineyards, in Cazenovia. For information on her programs, visit cuseyoga.com or email [email protected].

“People gather socially with food and drink,” she says. “Why not add a healthy component — yoga — with gathering around food and drink?”

Beer + Yoga events have been well received at the Empire Farm Brewery by the craft beer and fitness communities; three events, including one on Saturday, March 18, were sellouts. The events, introduced in January, welcome about 35 yogis to the brewery production area, with soaring windows, lots of natural light, mats rolled out amid the fermentation tanks and the yeasty aroma of beer replacing the sweet scent of incense sometimes found in the traditional yoga studio. After an hour of yoga designed for all ages and abilities, participants adjourn to the tasting room for a pint of their favorite Empire beer.

Emily Irvine, of Cazenovia, an account coordinator for a specialty food distributor in Syracuse, has practiced yoga for about seven years and normally takes classes at O Yoga in DeWitt. She describes yoga at the Farm Brewery (where her husband, Nick, serves as director of operations) as a slight departure from some of the more meditative yoga classes she has taken, since the production area can be a bit noisy at times.

Yet she prefers the quick-paced vinyasa style, with its flowing sequence of poses. “It was the most social yoga class I have ever participated in,” she says, “as it was an extremely varied group in terms of yogi levels and personalities.”

Afterward, participants retreated to the tasting room and Irvine sampled Empire’s Après IPA (American Style IPA) and Cranbaby Wheat, an unfiltered wheat beer brewed with cranberries. “I absolutely love the Cranbaby Wheat. It’s refreshing and light, but also feels a little like a winter beer due to the addition of cranberries.”

“I would absolutely recommend this experience to others,” Irvine adds. “I would also encourage people to not let being a beginner deter them. The class was very beginner-yogi friendly and there were many first-timers in the class.’’

Emily Whalen, marketing director for Empire Brewing Company, says Empire plans to expand its “Beer +” offerings at the Farm Brewery and take them outside when the weather permits. That will allow 50 to 70 people to participate, she says. The April event, which has not yet been finalized, will feature two classes. Stay tuned for details by visiting facebook.com/EmpireFarmBrewery.

Also in April, CoreLife Eatery, a pioneer in offering “Yoga and … ” events in Central New York, will offer its fourth “Yoga Feast” at Chuck Hafner’s Farmer’s Market, its next-door neighbor in North Syracuse. The event, scheduled for April 8, 9 a.m. to 7 p.m., will feature seven yoga classes spotlighting seven local yoga studios. New this year are barre (ballet-inspired fitness classes), a kombucha-making workshop and a container gardening workshop that shows people how to grow some of the produce used in Core’s greens bowls.

Meggan Camp, community engagement director for CoreLife Eatery, says the event typically sells out and is capped at about 100 participants per class. Some people make a day of it and take multiple classes, while others come for one or two classes and a healthy meal at Core. This year, a fee of $5 per class/workshop will be charged. All proceeds will benefit the GetLivin Foundation, which provides programs for youth centered on health, wellness and personal development.

“The yoga feast is geared to community, to people coming together and practicing together,” Camp says. “This year, the whole day is going to be built out even further beyond yoga into lifestyle choices.” For information, visit facebook.com/CoreLifeEatery7265BuckleyRdSyracuseNY13212.

Sunday Yoga Hour: $10 gets you into a yoga class offered at 11:30 a.m. Sundays at World of Beer, Destiny USA. Wrap up the session with a pint of Brewery Ommegang’s Nirvana IPA. Call (315) 422-2330 or visit worldofbeer.com/Locations/Syracuse.

Beer + Yoga: Roll out your mat for an hour of yoga in the production area of the Empire Farm Brewery in Cazenovia, followed by a pint of beer in the tasting room. Fitness events are offered monthly and will move outside when the weather allows. Visit facebook.com/EmpireFarmBrewery.

Yoga + Wine: A March 25 event at Greenwood Winery and Bistro, East Syracuse, featuring an hour of yoga plus a wine tasting is sold out. Similar events may be offered in the future. Visit facebook.com/GreenwoodWinery and cuseyoga.com.

Free Will Astrology
Spring into These Weekend Events
To Top