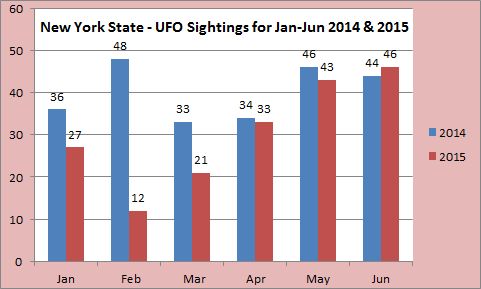 In terms of UFO sightings in New York State, 2015 is off to a slow start. Sighting numbers for January through June are clearly down. UFO sighting reports for New York from both reporting services are down a solid 25 percent, as compared to 2014.

For the same reporting period, last year’s numbers reached 241 reports before the highly-reported sighting months of July and August. This year’s sighting reports for January through June are 182.

The first quarter’s UFO sightings were clearly weaker this year than at this time last year. Given that second quarter sightings reports are on par with last year, it’s anyone’s guess what the summer months will yield.

One suggested explanation is the polar vortex that had the upstate region wrapped in subzero temperatures in January and February. While the super cold probably wasn’t a hindrance for our extraterrestrial visitors, it certainly was an impact for Earth bound sky watchers. The summer months are the high season for UFO sightings, so we’ll all just have to wait and see how 2015 shakes out for sightings. 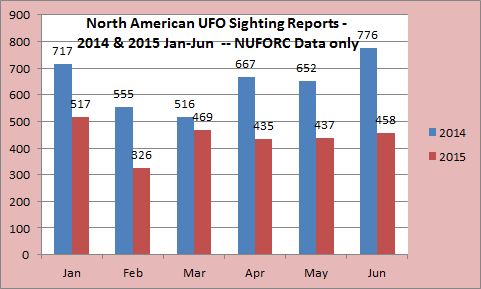 But beyond New York State, the story is much bigger. North American UFO Sighting reports are down 32 percent from last year. Using National UFO Reporting Center data only, 2014 logged some 3882 UFO sighting reports for the first half of the year. 2015 is reporting only 2642 sighting reports.

The nagging question is, what changed? While we might easily write off lower sighting numbers in New York to bad weather in the Northeast, logic suggests that can’t be the story for the rest of North America. As I said before, we’ll just have to see where the trend goes as we enter the summer months.

Several ideas have been brought up, including decreased interest in studying our species. Perhaps the extraterrestrial visitors know its presidential campaign season and have decided to take a holiday for the foreseeable future.

July 9, 2015: At about 9:45 p.m., a family in Cheektowaga, NY observed a bright fireball orb that changed colors and at times appeared as a blur.

July 14, 2015: At about 11 p.m., a resident of Cohoes, NY reported two glowing orbs that floated in perfect sequence past her window. The orbs disappeared as they entered the woods.

July 15, 2015: At about 10:15 p.m,. a Fredonia, NY resident witnessed a light too bright to be a planet in the night sky, glowing bright yellow. After a few minutes, it slowly descended toward the horizon.

If you are interested in joining a monthly UFO discussion group in Onondaga County area, drop Cheryl an email [email protected] If you have a UFO sighting to report, you can use either one of the two national database services: nuforc.org or mufon.com. Both services respect confidentiality.