In the early 1980s Christine Lightcap was singing the role of Nancy in a Landmark Theatre Wing production of Lionel Bart’s Oliver. Getting into her big number, “As Long As He Needs Me,” Lightcap leaned against the proscenium, putting her hand behind her. At that moment a brick came loose from the column in the 1928 former movie palace.

Maureen Harrington, then an 18-year-old chorine, watched everything up close. Lightcap could not push the brick back into its perch because the mortar had already given away. And she couldn’t let it fall to the floor because the loud crash would surely destroy the song. So she finished the number, one of the most passionate ballads in musical theater, with a brick in her hand, just as if director Lucille Markson had called for it.

Christine Lightcap died on the afternoon of Oct. 26, just hours before the beginning of the Syracuse New Times Syracuse Area Live Theater (SALT) Awards, where her winning a place in the Hall of Fame would be the climax of the evening. Out of circulation since summer 2013, her death was not unexpected. The cancer that began in her lungs had spread. Death just seemed unlikely for someone who had bested her rivals and leaped over disappointment and obstacles. 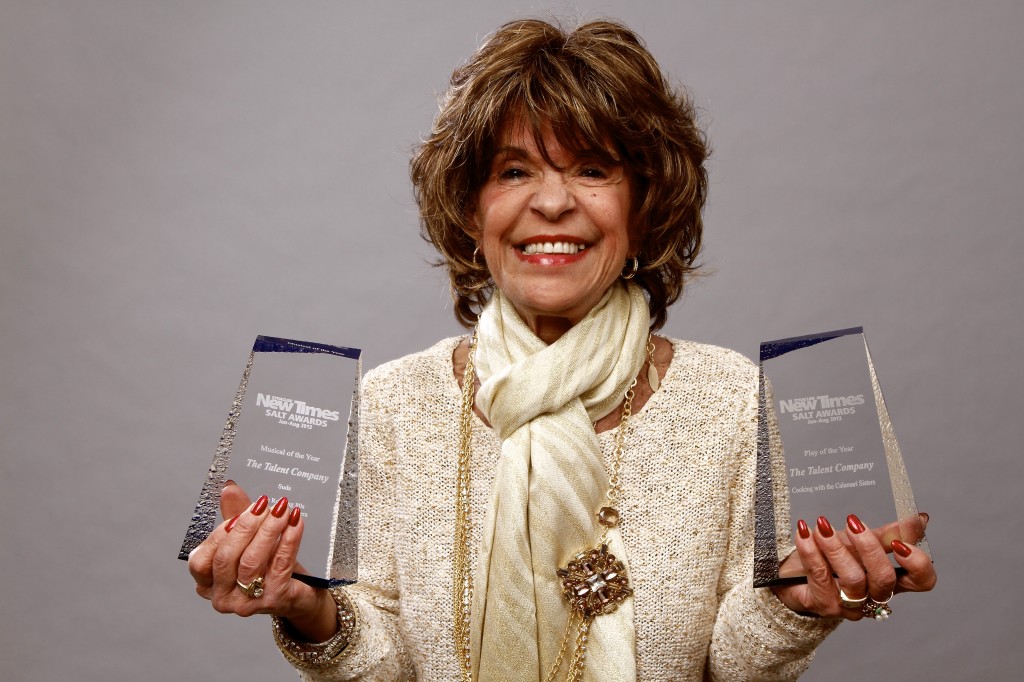 As elder statesman Frank Fiumano put it, “She was a dedicated, passionate force of nature to theater in Syracuse.”

Her career, including professional work in California, had thrived for many decades, a line of successes with more peaks than the Andes. She appeared in more than 150 roles, not all of them under her own flag. The Talent Company, the outfit she founded more than 30 years ago as “the MGM of local theater,” produced more 200 shows, many of which did boffo box office business: A Chorus Line, Chicago, Funny Girl, La Cage Aux Folles, Nunsense, The Producers, The Rocky Horror Show and West Side Story. 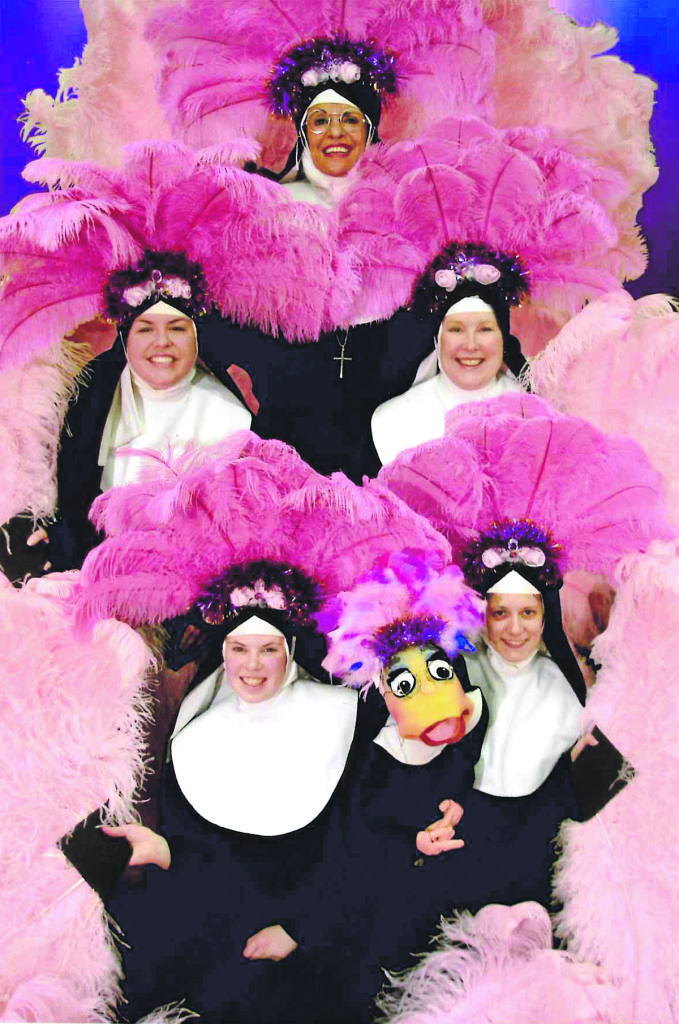 For someone who liked to perform – make that was driven to perform – Lightcap had a consistently strong record. Energetic, spicy, humorous women like Googie Gomez (the Rita Moreno role) in Terence McNally’s The Ritz or Rizzo (not Sandy) in Grease came naturally, but she had a much wider range.

She could dominate the stage in roles calling for imposing panache, like Dolly Gallagher Levy of Hello Dolly!, whose costume she requested for her burial. A favorite among many roles was Sister Mary Regina in the many incarnations of Nunsense. For the last 20 years she signed every email to fellow cast member Shannon Tompkins, “Mother Superior.”

She also scored in non-musical comedy, such as James Kirkwood’s Legends, a kind of life-imitates-art battle in which she contended with pal and sometime adversary Barbara Stone Gibbons. The one that broke the most hearts was her Mama Rose in Gypsy, when she belted out “Rose’s Turn” the night her mother died unexpectedly. She could be affecting in dramatic roles as well, once playing a homophobic mother in the AIDS-themed The Quilt.

Bob Brown, who probably saw her perform more often than anybody, often on the same stage, thinks her best role was Fraulein Schneider in Cabaret at Cortland Repertory Theatre in the mid-1970s. A Kit-Kat girl in that production was played by later Academy Award winner Holly Hunter. Lightcap’s last appearance was as Fraulein Schneider at the Redhouse Arts Center in summer 2013.

Lightcap’s Talent Company has always been semiprofessional, meaning performers could be paid, and she always bridled at seeing it classed as “community theater.” This distinction led to numerous abrasive conflicts. When rights became available for a new hit show, Lightcap could always outbid the non-professionals, and she fought hard for what she wanted. 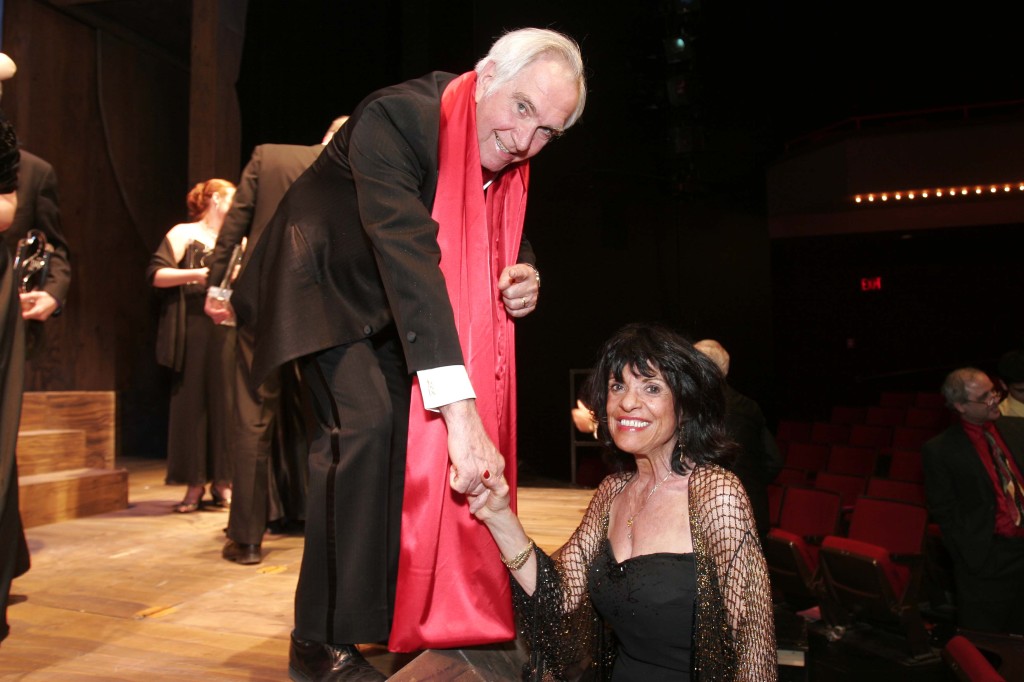 On the other side, her shows really looked professional. As veteran actress-director Judith Harris observed, “She was the only woman who founded and ran her own company and maintained the highest standards for 30 years.” When the Talent Company did The Unsinkable Molly Brown, an offbeat choice but a huge hit for her, the title character had 19 costume changes.

Without fundraisers or a corporate sponsor, Lightcap’s Talent Company always seemed to be able to round up the wherewithal to ensure her standards were not compromised. In making a delivery once to her home, your man from the Syracuse New Times came across Lightcap putting her fist through the crowns of a pile of vintage boater straw hats. She had ordered them from a costumer for a production of The Music Man, but she didn’t like them. The supplier would not take them back, and she had ordered new ones she liked better. There was nothing to be done with the old ones except to punch them out–Pow!–one crown at a time.

The “talent” of her company’s name might refer to her astuteness as a scout for new performers. She attended countless high school productions, looking for the ingénues of an upcoming season. Of the 500 or so people with measurable abilities in the area, at least two-thirds have appeared in Lightcap shows. They’re some of the best people around: Kate Huddleston, Susan Basile, Aubry Ludington Panek, Gennaro Parlato, Brandi Ozark, Jimmy Wachter, Shaun Forster, Bill Coughlin, Carol Ditch Bennett, Tamaralee Shutt, Dani Gottuso Ryan, Mark Bell, Colleen Wager, Dana Sovocool, Julia Berger, Joe Spado, Suzanne Tiffault, Elizabeth Fern and on they go. Later Tony Award-winner Steve Kazee arrived in town with another company, but he racked up the credits that opened the door to Broadway with the Talent Company. 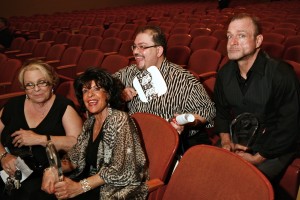 One of Lightcap’s continuing struggles was in trying to find a home for her Talent Company. At one time she was a frequent tenant of the Carrier Theater at the Mulroy Civic Center, which arts visionary Joe Golden had promised would be a space for local outfits. The SRO crowds she drew for successive productions of A Chorus Line there in the 1980s jammed the place. That is, until rising costs for the Carrier ruined Golden’s promise. Then she experimented with other venues, like Jamesville’s Glen Loch restaurant and the Three Rivers Inn, relocated to a strip mall in Phoenix.

Lightcap finally settled on the Empire Theater, later called the New Times Theater, at the New York State Fairgrounds. After investing her own capital to bring the place up to snuff, this is where her shows of the past two decades appeared. Other companies shared the space with her.

The theater was the site of the “What I Did for Love” tribute for Lightcap on Oct. 16. Organized by Bob Brown, Jeff Kalpak, Shaun Forster, Brenda Neuss and others, it was an invitation-only event for 160 of her closest friends. It was two hours of heartfelt, powerhouse performances led by Maureen Harrington’s “She’s the Greatest Star,” Susan Basile’s “As Long As He Needs Me,” the West Side Story quintet with Cathy Osinski, Josh Mele, Basile, Sovocool, and Wachter, and the finale, “What I Did for Love” with the entire company.

Lightcap had, literally, 10 days to live, and BFF-caregiver Marlene Raite says that Oct. 16 was not one of the patient’s better days. Only morphine kept her from paralyzing pain. When suppressed grief broke through Frank Fiumano’s supposed-to-be sunny “I Am What I Am,” his voice cracking with emotion, tears could be seen welling in eyes across the room. It was the most wrenching Lightcap show ever.

Mentioning Lightcap’s age was a famous taboo, like uttering the title Macbeth backstage or identifying the killer in The Mousetrap. But she spoke strongly to people half as old as she was, even when they did not work closely with her. Said Garrett Heater of the Covey Theatre Company, “She displayed a passion and joy while devoting her life to the theater. She will remain a living legend in our hearts.”

The former Christine Ragonese grew up in Eastwood and graduated from Syracuse University before marrying Richard Lightcap in 1962. She is survived by two children, son Kerry (married to Victoria) and daughter Kelly (married to Kevin Daley), and six grandchildren.

In accepting her SALT Hall of Fame trophy, son Kerry Lightcap offered that her greatest reward was in knowing that she had touched so many lives.