(Travel) A trip to Ireland

It was the trip that almost wasn’t.

On July 2, in St. Paul’s Church parking lot in Norwich, N.Y., a group of 40 eager travelers gathered in the steam of early summer. Nine short of the entire brigade, the Oneonta Bus Lines coach was loaded down with luggage as parents and children, husbands and wives, brothers and sisters, aunts, uncles, cousins, and total strangers climbed aboard anticipating the week of impending green that only Ireland can provide. 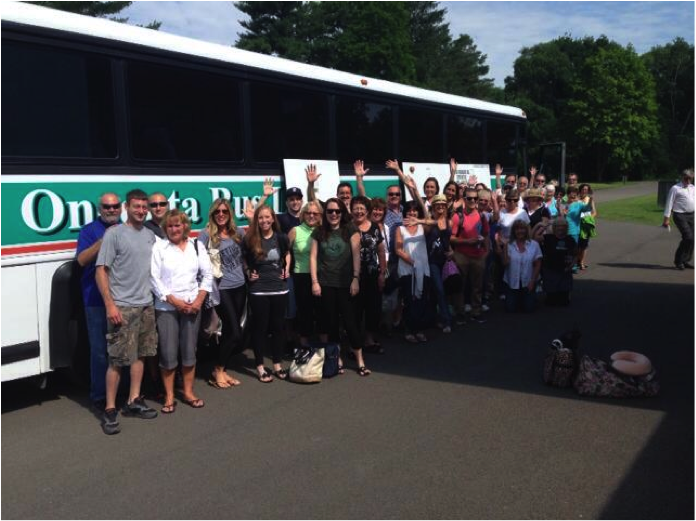 Amidst the excitement between long-separated old friends and the introduction of soon-to-be new ones, the wheels eased into motion and the first burst of Nitrogen sounded from beneath a Guinness cap before crossing county lines. However, on the route to JFK the traffic grew heavy as the Styrofoam coolers lightened – both at alarming rates. The river of melted ice that flowed from the pores of the coolers welled to a stagnant pool as the coach wheels turned from a crawl to a stop in the bumper to bumper of New York City traffic.

The bus remained pitted between tailpipes and headlights as the clock hands flattened the generous time-cushion BTI Travel Sales Consultant Mark DeMellier had allowed prior to take-off.

“Mark’s gotten quiet,” laughed the back of the bus. “Never a good sign.”

Through a series of phone calls back and forth from Mark to JFK, Aer Lingus set up a curbside bag check and stood ready to get the group through security quickly and efficiently. After nearly seven hours on the coach, the group of 40 bustled through the airport in true McAllister family Christmas style to meet the remaining nine. By alerting the airline, BTI Travel managed to get the entire group to the gate in time to make the boarding call.

All Home Alone 2 caliber disasters avoided and the only conflict of the next five hours would be whether to choose the chicken or the beef. 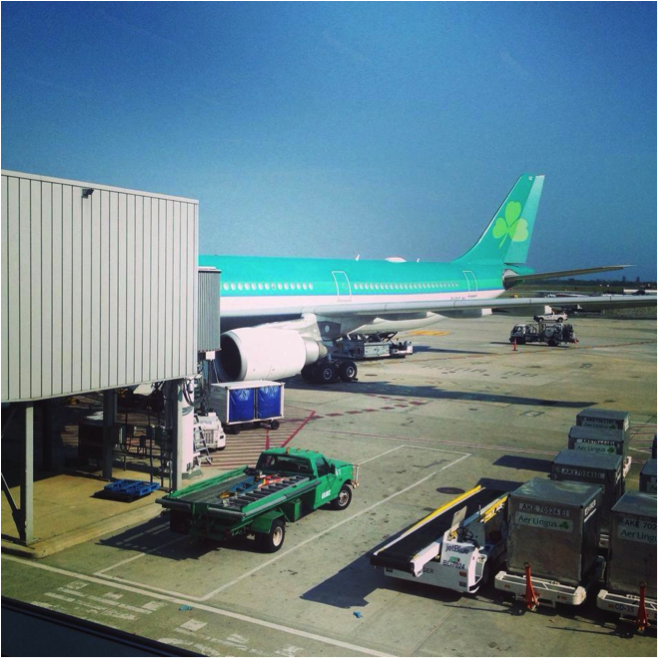 The wheels hit the landing strip around 5am and the groggy group met Abbey Tours guide P.J. Hammond for a bus tour of Dublin before having their first full Irish breakfast. Awakened by Gaelic traffic signs and the first of many renditions of “Molly Malone” that would be heard throughout the week, the group sparked a surge of rejuvenation. After a tour of historic Trinity College, the afternoon was spent by many exploring the city and searching for a perfectly poured pint. 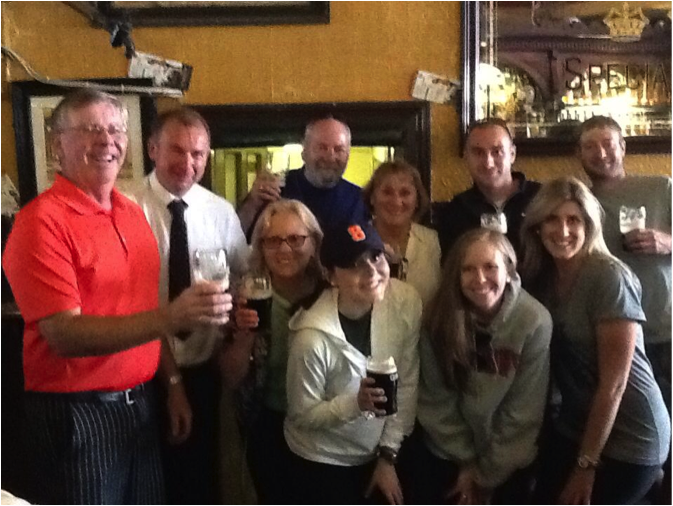 ‘My goodness, my Guinness!’

The ease of finding a pint wasn’t much of a surprise and some even indulged in a few-to compare the quality, of course.

A tour of the Guinness Storehouse the following day taught the group the secrets of how to taste and to pour their own pints like a true Irishmen. Between the 360 degree-birds’ eye-view of Dublin from Guinness’ Gravity Bar and the morning exploration of the Powerscourt Gardens outside the city there were no complaints about the lack of a barbeque this Fourth of July. 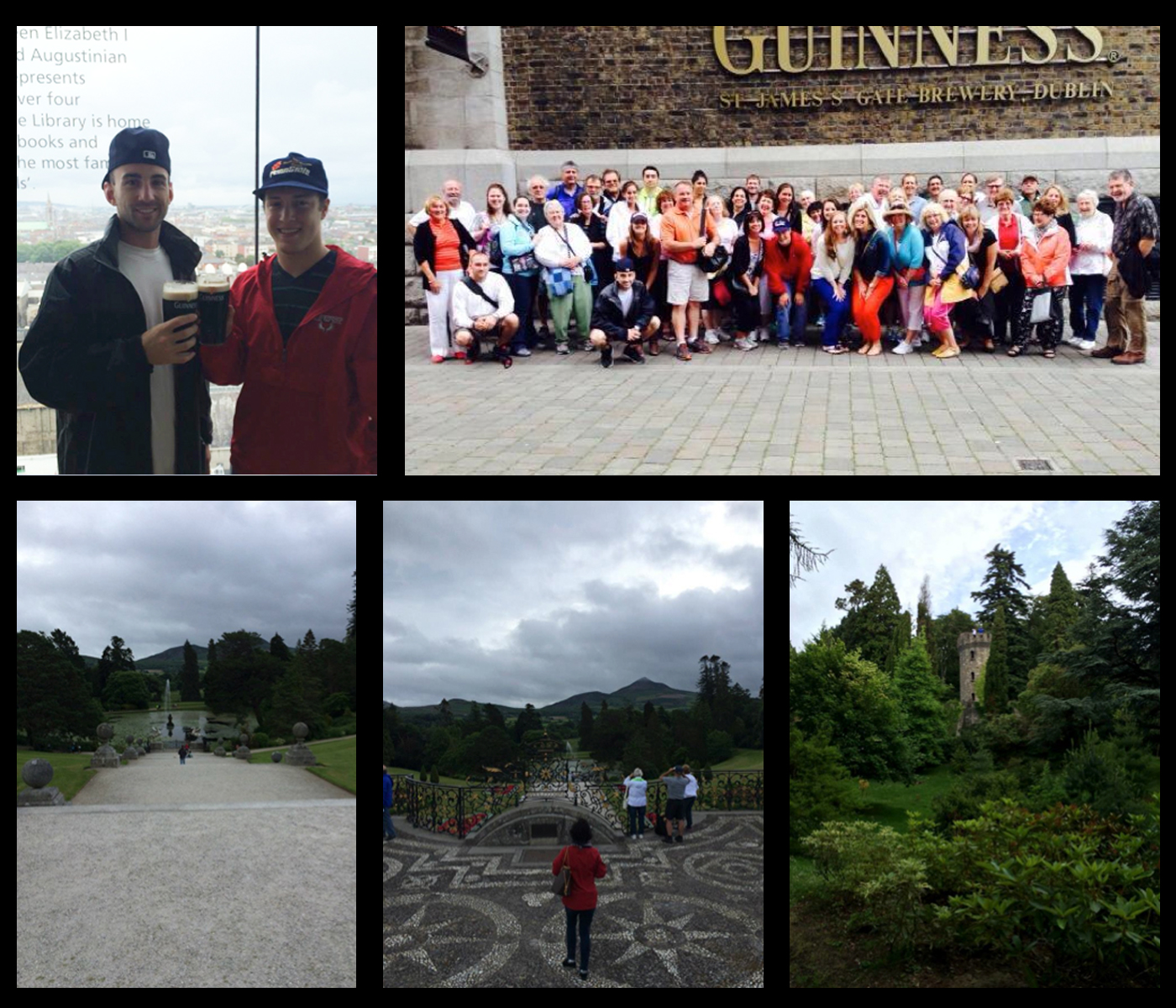 With a private party above an authentic Irish pub, complete with a slightly intoxicated bellow of The Star Spangled Banner, the first splash of the Emerald Isle drew to a close. The next morning, the group departed from Dublin and made their ripple out to the countryside of County Kerry.

Before taking stride in the music-filled streets of Killarney, they stopped at Blarney Castle to ascend the tower and kiss the infamous Blarney Stone. According to legend, those who kiss the Blarney Stone are forever endowed with the gift of eloquence. Despite the debate of those who came by the gift naturally, the majority of the group made the climb, held onto to metal rails, dipped their heads back and pressed their lips to the smooth limestone. 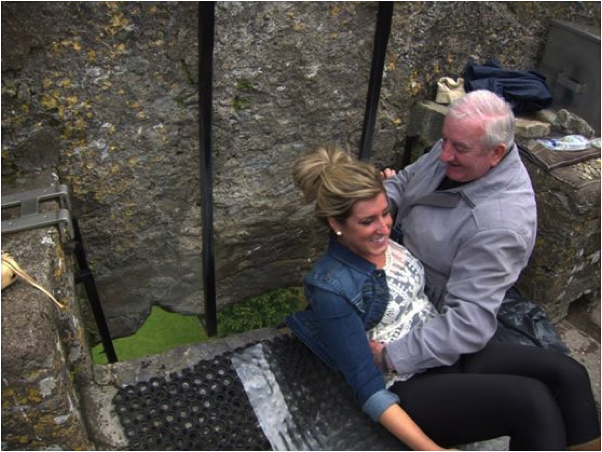 “Go ahead. Kiss ‘em. Kiss ‘em like you always be kissin’ ‘em,” laughed the Irishman as he supported one’s head back.

Those who say nothing good ever happens after 2am has never stayed out long enough to find themselves invited into an Irish-Scottish wedding at 3am. Later that night, back at the hotel, a few night owls found themselves as the denim in a sea of quilts clinking glasses with a bride. 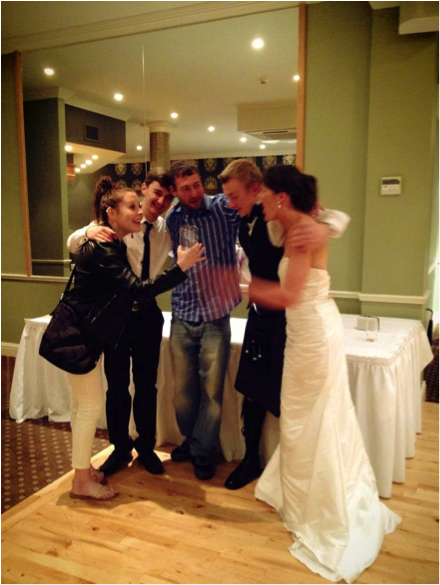 The next day, as the coach twisted through the serpentine roads P.J. doled out a true taste of Ireland with a breathtaking tour of the Ring of Kerry. Around each bend gave way to a new sight.

Sheep dogs darted through open fields training to herd the flocks of cotton-white sheep into the stonewalled farmland while around the next curve of road crystal tides flowed from the Kelly green to kiss the shore. 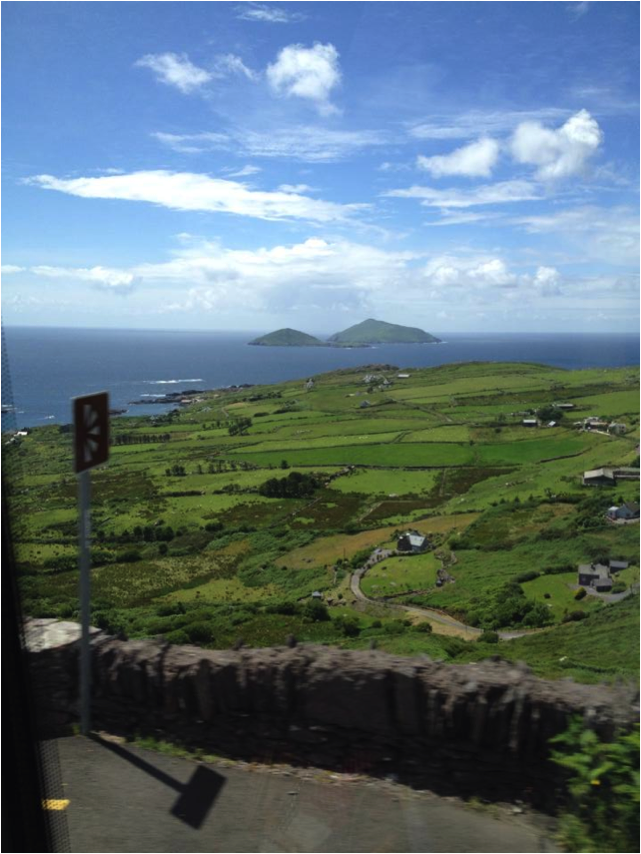 A few bottles of holy water were left in the doorway of a church on the tour for passerbys to take and one mother scooped one up to ensure at least some portion of the trip would attain salvation.

After circling the county, a few avid golfers were itching to play an Irish course. 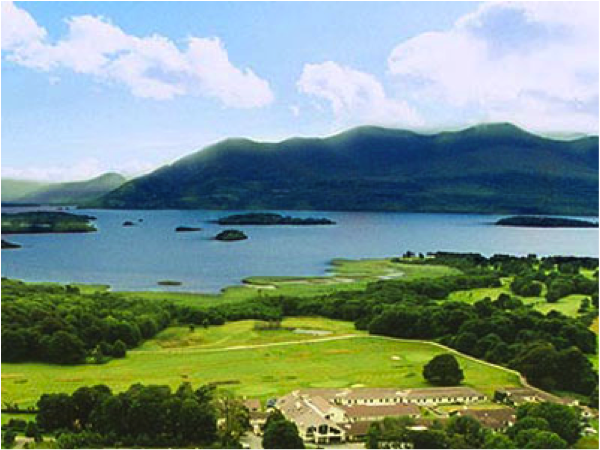 Despite the sun-filled tour day, Mother Nature was sure not to deprive them of the full experience and opened up her skies a few holes in.

After a few hot showers and Irish coffees to warm up the group settled into a pub with live Irish music for their last night in Killarney. The sun crept over the mountains and the bags dipped below the bus as the group departed the serenading streets for Galway Bay.

Along the way, the coach stopped at the Cliffs of Moher and the group spent the afternoon climbing the scenic shoreline overlooking the Aran Islands.

In the evening the group settled in to the city by the sea for the final leg of the journey. Wandering through the cobblestone streets of Galway, they found in the hidden street performer talent in Bob Collins who was chosen to help in the act of a man on a unicycle break free from a straight jacket. 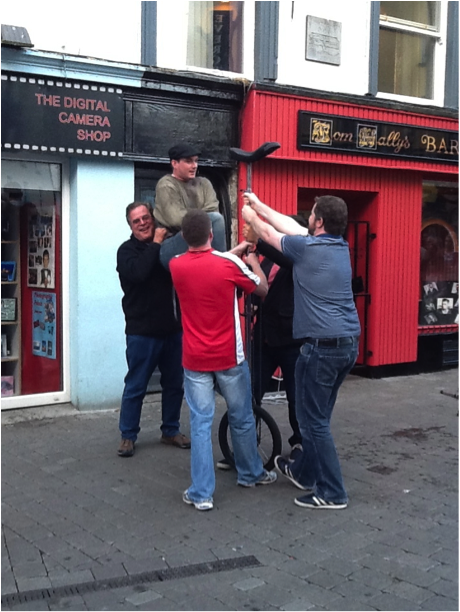 The final day was met with mixed decisions. Some ventured to Connemara to see unique cuts of marble formed deep beneath the earth and to the historic Kylemore Abbey, while others craved the excitement of the Galway streets.

After a day apart, the group reconvened that evening for a final dinner together. However, they did not find themselves sharing pints of Guinness in a pub that had managed to sneak some form of potatoes into every dish. 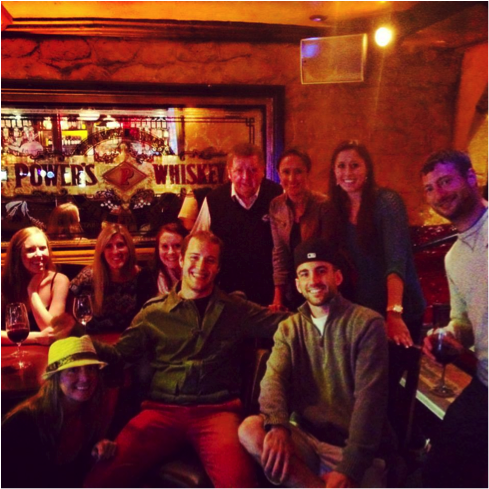 Instead, the final meal was a five-course spread in Dungaree Castle headed by a king and queen of their very own.

“Alright, you all have to do what I say,” commanded King Denny. 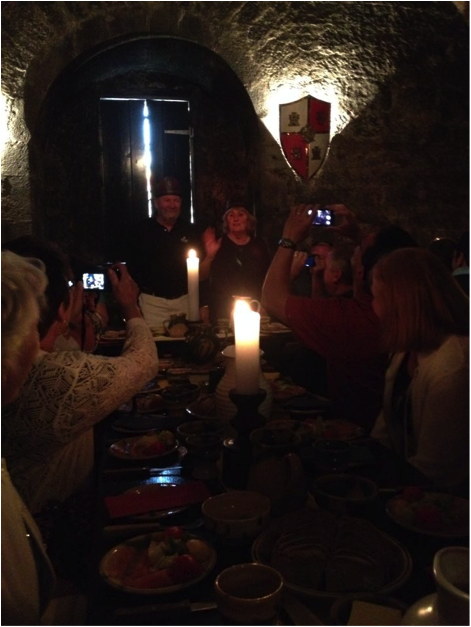 The musical and theatrical entertainment provided throughout the meal by the servers combined with a generous serving of Meade gave a few a little too much confidence in their musical inclinations on the bus ride back to the hotel. 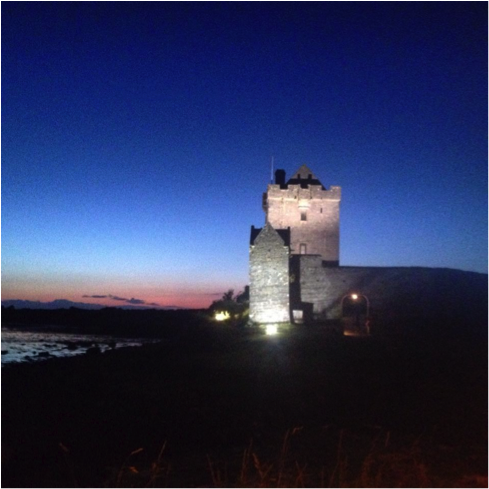 In the Irish morning air the group regrettably loaded the bus one final time. They stamped an end to the trip that for a moment the week before they though would never become the trip of their lifetime. With preparations to part in their 49 different directions another escape to the Emerald Isle was quick to be desired by all of those Blarney Stone kissed lips.

(Note: Do you have a travel story or adventure that you’d like to share? Send your travel blog ideas to [email protected])