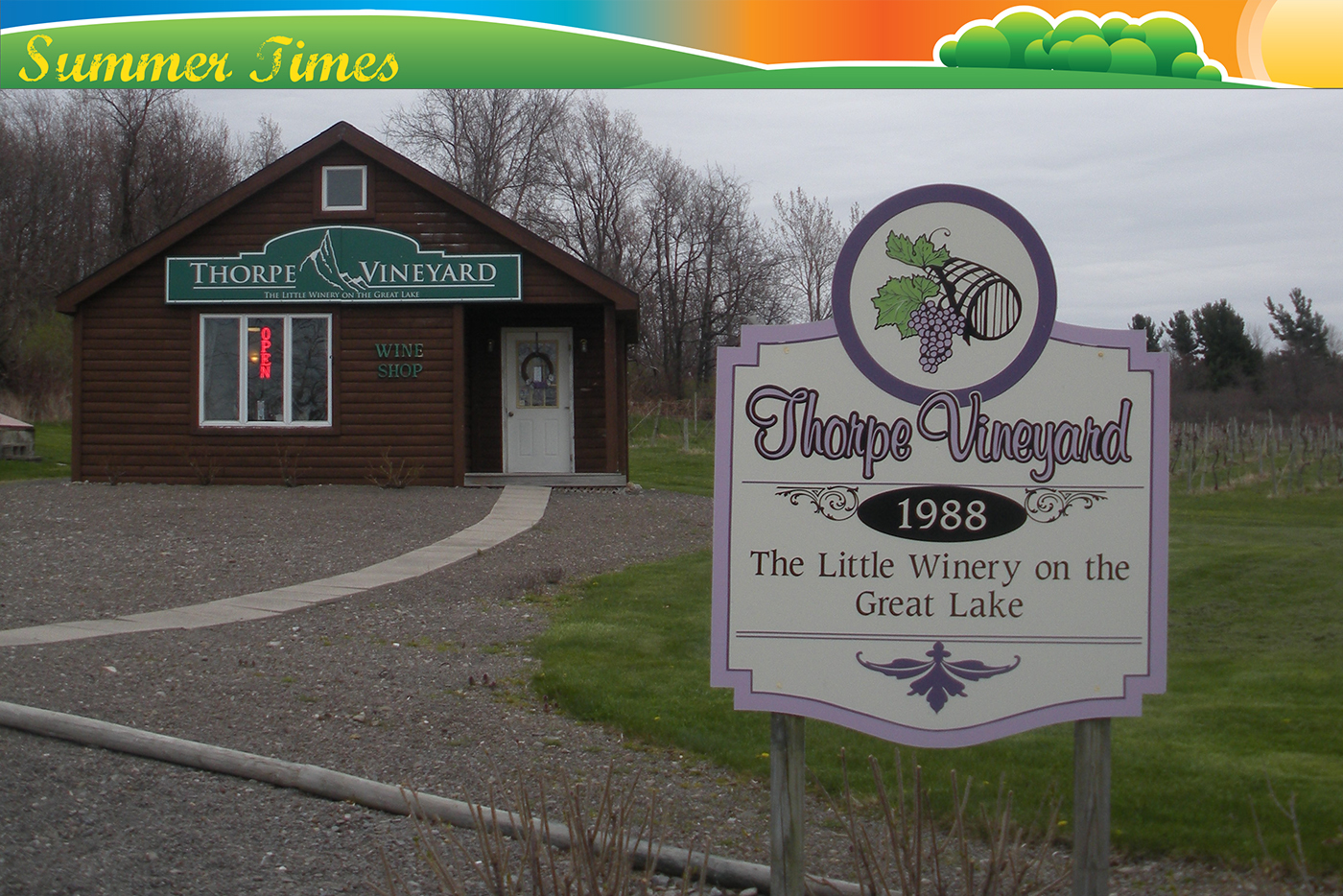 With a combination of dedicated farmers, artisans and more all working diligently, plus with a little help from New York state, you can now find hundreds of vibrant wineries, microbreweries and craft cider operations stretching from the edge of Niagara Falls on the Great Lakes to the outer reaches of Long Island and the ocean.

When people in this neck of the woods think of a trip to visit wineries, they often gravitate toward the Finger Lakes. For your next adventure, go west. Although much smaller in size and scope, the Lake Ontario Wine Trail offers a chance to discover wineries, craft ciders and more.

Heading to the Lake Ontario Wine Trail is not as simple as starting at the top of one Finger Lake, driving in a straight line with a few jogs here and there, and pulling into a driveway every time you see a fluttering “open” flag. Although there are currently about 10 Lake Ontario Trail wineries and cider producers stretching from Monroe County to the west and Cayuga County to the east, you’ll find most are in Wayne County and many are easily accessible off the major east-west Route 104. 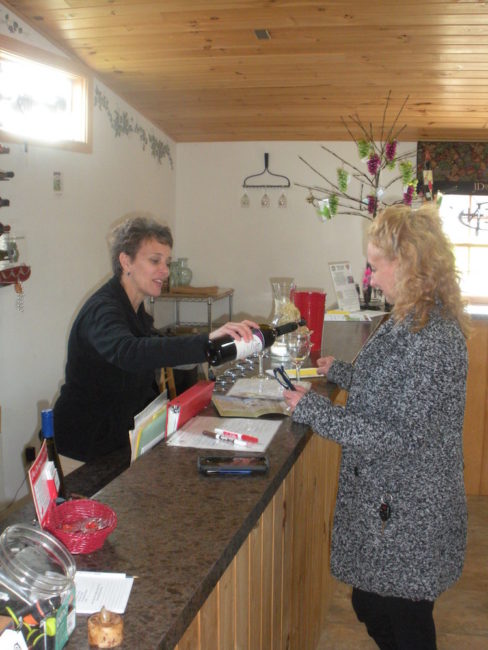 JD Wine Cellars, 1339 Eddy Road, Macedon (986-4202; jdwinecellars.com), is located a few miles south of Route 104, down Route 350. It‘s part of a family-run farm that started in the 1920s and is now helmed by the third generation. The tasting room is in one of the family houses that was converted in 2010 and is open year-round, albeit only for special events January through March. It features red, white and 100 percent fruit wines in addition to New York state beers and more.

Outside, there’s a cozy deck, complete with inviting rocking chairs, which overlooks the family’s Long Acre Farms. The mini-complex features a farm market, ice cream stand, numerous outdoor activities, a corn maze in the fall and the Music on the Lawn summertime series. The goal of JD Wine Cellars is to offer a well-rounded experience so there really is “something for everyone.”

Just a few miles north of JD Wine Cellars (and still south of Route 104), Apple Country Spirits, 3274 Eddy Road, Williamson (589-8733; applecountryspirits.com), is housed in a smartly designed, modern-day slate-blue barn-styled structure. The venue is officially a fruit-based distillery and the impressive copper stills are immediately visible as you enter the two-story tasting room, which opened in 2013.

Many of the hard ciders offered for tasting are available from a draft system; the distillery also offers spirits for tasting. Some might still have lingering memories of mass-produced ciders from long ago that lacked true character, but since Wayne County is the second-largest producer of apples in the nation, and these people know a thing or two about apples. They offer ciders with a range of flavors that move from dry to sweet. Other options include unique spirits such as raspberry and apple vodka featuring all-natural flavors. Don’t forget to grab a few of the minis as a gift or souvenir.

Next up is nearby Lagoner Farms, just north of Route 104 on Route 350; it has been a family-owned farm for more than a century and is now proudly run by the fifth generation. Launched about a year ago is Embark Craft Ciderworks, 6895 Lake Ave., Williamson (589-8122; embarkcraftciderworks.com), part of a retail market that offers flowers, baked goods, jams and salsas and numerous other items, as well as a mini-café where you can order paninis, sandwiches, soups or Sunday brunch. 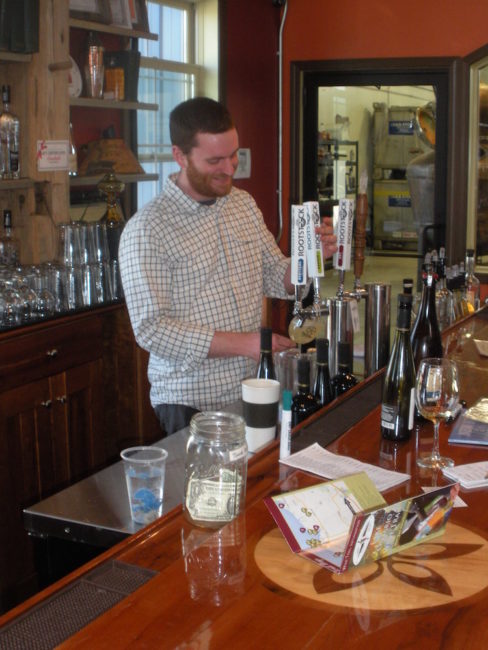 Whether it’s a Heritage cider from apples with origins going back decades or a new, innovative seasonal cider, the flavors are vibrant and sophisticated, with more people comparing ciders such as Old Marauder to white wines such as Chardonnay or Pinot Grigio. Patrons have the option of choosing a “flight” tasting so they can taste several different ciders, running from sweet to dry, and then zero in on one that they like the best. There are a number of special events including live music offered throughout the summer and fall.

Head north on Route 350 for less than a mile, turn right on Jersey Road and you’ll discover Young Sommer Winery, 4287 Jersey Road, Williamson (589-8861; yswinery.com). It’s a fifth-generation, family-run establishment by former Kodak and Xerox workers, with a former teacher as part of the mix, so you’ll find a focused, dedicated staff. The current owners bought the property in 1984 when it was an apple farm. Since Williamson was “dry” until 2006, they weren’t able to create the winery until 2008.

Wilma Sommer, one of the owners, had toured various New York state wineries with her husband, Herman, and remembered hearing a fair amount of negative feedback when it came to making wine with grapes vs. fruit. Yet she realized that many people who tasted samples would describe the wine with fruit-like characteristics: “I thought if grape wines taste better because they have the spirit of another fruit, why don’t they make wine from these fruits?” Thus, Young Sommer was on its way.

They offer a number of white wines such as Rieslings, Traminette and Bubbly Moscato, reds such as Lemberger and Sommer Blush, plus apple, pear and other fruit wines. They’ve even introduced their very first cider recently and also offer New York state craft beers.

Thorpe Vineyard, 8150 Chimney Heights Blvd., Wolcott (594-2502; thorpevineyard.com), is one of the oldest wineries in the area and dates back to 1988. It’s officially in Wolcott, but the winery itself is about eight miles north of Route 104 in the town of North Rose. You’ll have to take a few twists and turns and then head down a dead-end road that dramatically leads right into Lake Ontario. (Yes, there is a modest Stop sign and barrier, just in case.)

Since Thorpe is just a few hundred feet from Chimney Bluffs State Park, you get two prizes for the price of one. The dramatic jagged bluffs are a must-see, and they are walking distance from the small, cozy winery.

The winery itself has a small tasting room, and one of the owners is usually on site so you’ll have a chance to learn about the venue. They offer Riesling, Chardonnay, as well as more unusual selections such as Chancellor.

Colloca Estate Winery, 14678 West Bay Road, Sterling (947-2069; facebook.com/CollocaEstate), is the area’s newest winery. It’s a few miles east of Thorpe, again several miles north of Route 104 and on the lake. If you drive from Thorpe to Colloca, there are numerous side roads instead of a direct shot, so it’s best to head back south and catch Route 104A going east, then head north toward idyllic Fair Haven, you’ll enter a fairy tale setting of cottages and quiet waters. Colloca Estate is situated on more than 100 acres of property along the water in a parklike setting.

They are steadily adding amenities and structures, all with a dramatic modern-meets-rustic design. Start with the newly created pond, the smartly designed Spanish Iron Grill front doors, an inviting fireplace and more, and you’ll want to figure out a way to stay past closing time and settle in for the evening. Add a small kitchen that serves paninis, cheese and charcuterie plates, and this is a winery worth looking for. In addition to New York state wines, they have an agreement to bring in Australian wines, which are offered as tasting options.

More information on these wineries, including updates, farm markets, shopping and accommodations is available at LakeOntarioWineTrail.com. And don’t forget to save some space in your trunk for a few bottles to share with friends and family back home.

Scott Gudell is a regionally based freelance writer who has published more than 1,000 articles on music, sports and arts and entertainment.

A River Runs Through It
Show Me the Yummy
To Top