It was easy to walk away from Vinyl Albums Live IV on Saturday, January 11 in amazement. Recreating The Allman Brothers Band’s 1972 double album, Eat a Peach, Blind Faith’s 1969 self-titled supergroup classic and The Black Crowes’ The Southern Harmony and Musical Companion from 1992, is impressive in and of itself. To accomplish this as precisely and passionately as the bands did adds another level of awe. But then to meet and be involved with the musicians and see how hard they were willing to work, how happy they were to play with one another and how humble and supportive everyone was – it is a true lesson in how the best become the best.

The musicians who participated all brought uncanny talent to the table. To name and praise each of them would be redundant, but it’s impossible not to mention most of them: how blistering the double dream teams of Susan Royal and Pete Szymanski on drums, and Mark Westers and Chad Mac on guitar were in the ‘Allman Brothers Band.’ Or how the mind-blowing solos (and overall playing) of Jimmy Puma, Lenny Milano, Joe Porto and Steve Robinson were in ‘Blind Faith.’ Or how incredible it was to see Todd Stiles and Chris Eves trade their equally devastating licks in ‘The Black Crowes’ group. Vocals from Andy Comstock were delivered with the conviction needed to pull off ABB tunes and Doug Moncrief defied reality by owning some of the hardest vocals in rock (created by a 22-year-old Steve Winwood – not fair). Anyone who knows The Black Crowes and tries to sing along probably does so in the car or shower (where it’s safest) because Chris Robinson chooses to sing in ways normal humans can’t – except for Jason Vaughn. In a word, it was all unbelievable.

But there’s always more than meets the eye in productions as seamless as this. First, there’s the masterminds behind the entire idea. Husband/wife team, Bob Kane and Robyn Stockdale have been putting together the showcases since 2010, sampling some of the best albums in rock (Led Zeppelin, IV, The Who, Who’s Next). But once they have the albums and wrangle the musicians, then it’s weekly rehearsals (since October) and Kane is a genius at hearing parts, picking them out and knowing exactly what everyone’s role includes. They’re tirelessly hard working, talented and giving, all for the good of the show. 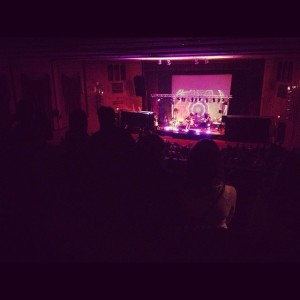 On this particular event, another local champion, Stacey Waterman, also played a crucial role, helping Kane and Stockdale pick the albums and place the right musicians (the choices were flawless) and execute the production – an enormous task. As usual, she proved that whatever she touches turns to gold as things rolled smoothly and the music spoke loud and impressively for itself. She also organized an amazingly efficient production team that helped the music sound its best (consider 20-plus musicians and all their gear getting on and off stage AND sounding good).

Participation from local sponsors including 105.9FM The Rebel rounded out the community feel and made complete sense as the station promotes both vinyl (they drop the needle on a different album every Thursday night on air) and local music (with Sunday night’s Soundcheck and daily Local Lunch). And the audience who came out to see, experience and support these amazing people deserve a round of applause themselves. The energy in the room and the smiles and appreciation they shared cannot go unnoted. Musicians can only survive if someone is listening.

But there’s still more to it and it’s something I saw most clearly by being involved in the production.

Whenever you get a group of creative people (or any kind of people, really) together to work on a collaborative project – you run the risk of all forms of disaster. Power struggles, egos and disagreements can easily plague the common goal.

Not in this group. 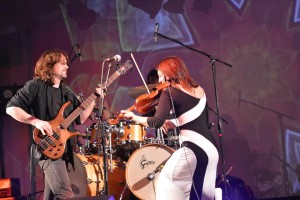 Once again, I was far and away the rookie, standing on stage with some of the biggest legends in Syracuse music (in the Blind Faith band) – men who have proven themselves the best for years. Yet, they were nothing but gracious, welcoming, helpful and appreciative to have me there. And at the end of the show, so many of the performers went around congratulating one another, naming specific moments they loved and showing mutual respect and admiration.

There are great players everywhere in the world. But it takes more than that to be successful by my own definition. These musicians proved that definition – success is the ability to share your gifts, but equally share in the gifts of others. Mutual respect and humility will take you much further than any solo. It takes hard work – rehearsals every week, an open attitude, a willingness to be there for one another. It’s not just about stepping on stage and expecting the world to come to you and something I’ve noticed since I started reviewing shows locally in 2009 was which musicians came out to see live music themselves. It gets difficult the more a musician plays, but the ones that make the effort are the ones I’ve always respected most. That sentiment continues.

The musicians who performed that night and those that dotted the audience were golden proof that supporting each other in a musical community is the best thing we can do for each other – and we need to.

For those who missed it – I’m sorry. You didn’t just miss a show. You missed something amazing.

The Allman Brothers – Band One: