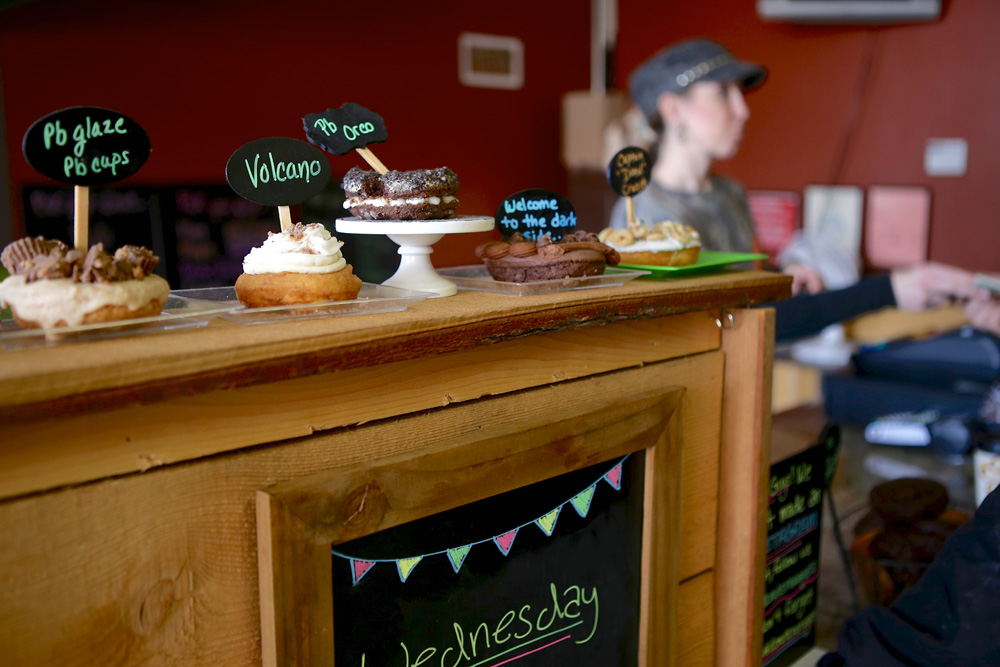 Just Donuts customers come from all around to enjoy their one-of-a-kind pastries.

You’d drive 20 miles or more for a well-made martini, perfectly cooked steak or golden-brown filet of fried fish, right? How about a doughnut, fresh out of the fryer, sprinkled with cinnamon and sugar. Or perhaps topped with maple glaze and crumbled bacon?

Doughnut fans make the drive from Syracuse, Cicero, Bridgeport, Camillus, Oswego, Fayetteville and Fort Drum once a week or more to Just Donuts. The small, storefront bakery is tucked away in the Three Rivers Plaza on Route 57, about four miles north of the Route 31 intersection in the town of Clay. 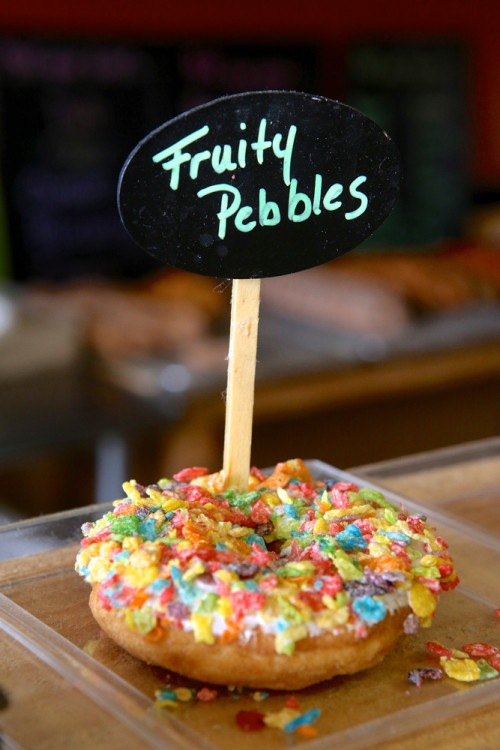 “If it’s a product you want, people will drive for it,’’ says Britta Nerber, who owns the shop with her husband, Marty. “I want to be that ‘hole in the wall’ everyone drives to.’’

But don’t take that statement to mean Just Donuts offers doughnut holes. It doesn’t. The shop, as its name suggests, offers doughnuts only, made in small batches throughout the day.

Just Donuts opened in October 2012 and has been growing its customer base steadily since then, largely by word-of-mouth and tempting photos on Facebook and Instagram. One way the Nerbers build business is by offering a drawing for a free dozen doughnuts each week. Another way is “Free Delivery Fridays.’’ Order ahead for your office anywhere in Central New York and Just Donuts will bring them to you.

The more elaborate models are called “Crazies’’ by Nerber and her staff. The Crazies include cider sinkers with maple glaze and crumbled bacon, banana bread doughnuts with chocolate and/or peanut butter glazes and Welcome to the Dark Side, a new Star Wars-themed creation on a chocolate doughnut base, with chocolate glaze, chocolate frosting, chocolate chips and chocolate sprinkles.

In a category of its own is the chicken wing doughnut (you read that right), a specialty offered on Sundays only. These are appetizer-size yummies that feature all the elements of the wing experience — chicken, celery, blue cheese and hot sauce — encased in a doughnut.

Special and special-occasion orders are encouraged. Nerber and her team supplied doughnuts for several weddings in 2015. “Doughnuts are the big thing for weddings,’’ Nerber says. “They’re the new cupcakes.’’

Just Donuts, which already has several nuptials booked for this year, also features doughnut trays (featuring either whole or bite-size doughnut chunks) and “do it yourself’’ spreads including doughnuts, crocks of glazes and an array of toppings.

Terry Neidl says one advantage to living in Clay is easy access to Just Donuts. The Neidls, who live a couple miles from the bakery, try to limit visits to once a month but have been known to go twice in one weekend when doughnut cravings strike.

Neidl is fond of the plain doughnuts, with maple glaze and crumbled bacon on top. His wife, Stephanie, likes peanut butter glaze and strawberry jelly drizzle on her plain doughnut, as well as the banana bread version (with chocolate glaze) and red velvet selection (with cream cheese drizzle) when they are available.

“They are phenomenal,’’ Neidl says about the taste treats at Just Donuts. “And a great local family, to boot.’’

Just Donuts is at 219 County Route 57, Phoenix, in the Three Rivers Plaza. Hours are Tuesdays through Saturdays, 6 a.m. to 1 p.m., and Sundays, 8 a.m. to 1 p.m. For information or to place special orders, call 695-1387, email [email protected], or visit justdonutsnobagels.com.