Plaintiffs: Jeff Kramer and other motorists with New York license plates that begin with the letter “E.”

Attorney for Plaintiffs: Pending. Any takers out there?

Defendants: The New York State Department of Motor Vehicles, the Auburn Correctional Facility, Gov. Andrew Corrupto, Obama (Because everything is ultimately his fault) 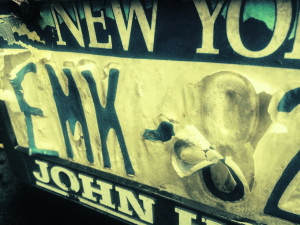 Whereas on or about Aug. 22, 2014, Plaintiff’s wife, Leigh, came running in from the garage and expressed shock and concern at the deteriorated state of the license plates on Kramer’s 2008 Honda Element; and

Whereas Kramer is not always in the habit of “listening” to his wife, and thereby continued to drive said vehicle for several weeks without examining aforementioned plates; and

Whereas, on or about, Sept 17, 2014, Plaintiff’s wife brought to his attention an impressively thorough Time-Warner Cable news story revealing that blue-and-white New York plates that begin with the letter “E” are in many cases blistering and peeling to the point of illegibility; and

Whereas Kramer’s plates begin with “E” and have shown significant blistering, particularly the front one; and

Whereas a source in the Time-Warner story states that the problem is only occurring with license plates that begin with “E”; and

Whereas a DMV worker that Kramer was reduced to approaching in the parking lot of the Syracuse office this past Thursday because the office was already closed at 4 freakin’ p.m., repeatedly cited “motor vehicle law” as the reason motorists must pay the cost of replacing the plates; and

Whereas the minimum replacement charge is $28.75, more if you want to keep your same license plate number; and

Whereas some DMV offices initially agreed to replace defective “E” plates free of charge, but the agency later backtracked because … they’re the DMV; and

Whereas the DMV now maintains that the plates are blistering due to “normal wear” and yet clearly if this were the case plates starting with other letters of the alphabet such as “M” and “P” would also be blistering; and

Whereas Kramer this past weekend watched the move “Network” on Turner Classics Movie channel, and finds himself strongly identifying with Peter Finch’s signature line: “I’’m mad as hell and I’m not going to take it anymore!”; and

Whereas Kramer depends on prison laborers at the Auburn Correctional Facility to produce quality license plates irrespective of the sequence of letters; and

Whereas the last thing Kramer needs is another excuse for the cops to pull him over; and

Whereas the punishing of a random class of citizens is prohibited by the Equal Protection Clause of the 14th Amendment of the U.S. Constitution, and

Whereas the DMV’s own stupid rules specify that motorists must pay for lost or damaged plates but do NOT require motorists to repurchase defective plates; and

Whereas as New York State government is the laughingstock of the nation and generally sucks ass; and

Whereas in 2009 approximately 2 million New York State vehicle registration stickers failed to adhere to windshields due to an outbreak of “bad glue,” and

Whereas Kramer experiences scorn, humiliation and feelings of vulnerability each time he is forced to display his blistering “loser” plates on a public thoroughfare; and

Whereas Kramer’s pal, Jordan, a bartender at The Ridge in Chittenango, also has a license plate that begins with “E”and his, too, are peeling; and

Whereas Jordan will give Kramer a free drink if he mention him in this lawsuit; and

Whereas the negative stigma associated with being an “E” person has led to numerous physical disabilities in Plaintiff, including but not limited to alarming bodily humours and severe hair loss; and

Whereas motorists possessing “E” plates that have not yet begun to peel must nonetheless live with the constant fear thereof; then

Be it recorded that Plaintiffs herein beseech the Court for actual damages of $1,000,028.75 multiplied by the number of E” plates issued statewide.

I say ISIL, You Say ISIS (Let’s Call the Whole Thing Off)
Lonely at the Top
To Top