Who knew that buried in the statistical numbers was evidence of a 1957 UFO surge.

In order to write this column week after week, I must comb through the data bases of the Mutual UFO Network (MUFON) and the National UFO Report Center (NUFORC) to find interesting stories and to glean the statistics for my charts.

This week, while looking at older UFO accounts, I noticed a swell in UFO sighting accounts in 1957. As I dug deeper, I noted that both national databases were notably robust, suggesting to me that there was a 1957 UFO Surge.

It’s important to understand that before the late 1990s, UFO reports sent to clubs and associations that collected such data amounted to letters, news clippings, faxes and phone messages. Fortunately, older UFO sightings found their way into the online databases by interested people filing these reports retroactively.

Neither of the two national databases reflect a truly stable baseline of sighting reports much before 1999. That’s not to say that there aren’t large numbers of older reports. The only problem is that the data can be spotty at best. That’s part of the reason most of my recent charts reflect a sample window between 2001 through 2015. I consider this time range to be a relatively stable sample. 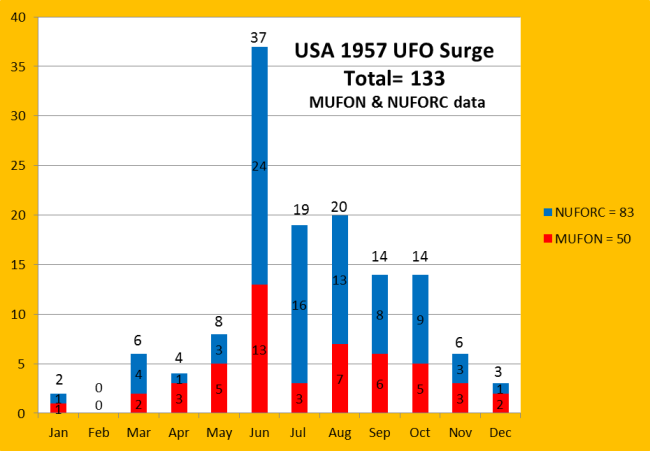 I noted a swell in the UFO reports, so I started keeping track on paper. After checking both databases, I accumulated the numbers reflected in the chart above. It’s rare to get enough of the older reports to put together such a good chart. The numbers in the chart reflect the whole country for the year of 1957. Does it represent all the sightings for that year? No, absolutely not. But, it does indicate that something was going on that year.

What follows is a roundup of UFO sightings from the 1957 UFO surge 59 years ago in New York state.

June 1, 1957: At 8 p.m., several residents of Glens Falls witnessed a small formation of flying saucer like craft flying east to west about 200 feet above the ground. The observers say the “saucers” fluoresced their own light. They reported that the crafts made no sounds whatsoever.

June 30, 1957: At midnight, a resident of New York City was enjoying a late-night walk on a local trail. Suddenly, he observed a softball-sized red light hovering about a foot above the ground and flew in a zig-zag pattern. He stated that when it started flying around the trees and coming toward him, he ran for home.

June 30, 1957: At 8 p.m., a resident of Barker and his six kids saw a flying saucer. He tells us that the kids were playing outside around dusk. Suddenly, a huge round saucer-shaped object appeared and hovered over the family. He describes the craft as having red and green lights and windows. After a few minutes, the craft departed as fast as it appeared.

Aug. 14, 1957: At 4 p.m., a resident of Ticonderoga was watching an Air Force B-47 in local skies when a silvery-white disc appeared out of nowhere and began buzzing the B-47. He said he lost sight of both craft when they flew beyond the tree line.

Oct. 10, 1957: In the late afternoon, a Schenectady resident who lived in a trailer on the Duanesburg-Church Road near Mariaville, saw a circular object go down behind the hill. Two minutes later, it flew up again and was very bright. A bus driver was said to have seen two crafts land in a nearby field at the same hour.

Nov. 5, 1957: At 4:30 a.m., a New York City resident was talking with a bus driver when they saw a metallic object shaped like a disk in the park, about 400 meters away. They said that the top of the object had a fixed dome with portholes. The object was hovering at tree-height. A yellow light from the craft suddenly illuminated the area, just before the craft flew off “like a shooting star.”

Nov. 8, 1957: At 2 a.m., a resident of Sloanville observed a cigar-shaped object approximately 80 to 100 yards long. The observer reported the object was hovering about 30 feet above ground.

Fresh Music Friday: PWR BTTM
Where the US is Actually Divided
To Top