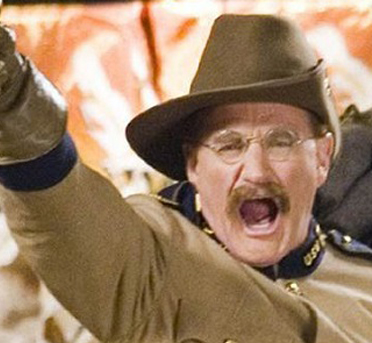 A sad farewell for Robin Williams

For this reviewer, the fact that Robin Williams was making his last on-screen performance as Teddy Roosevelt was the deciding factor that pulled me into the theater for the Saturday afternoon matinee of Night at the Museum: Secret of the Tomb. (Yeah, our great comic visionary who took his own life last August is listed as Dennis, the title character teacher with magical powers, but when that comes out next May, it’s just his voice.) Otherwise, I’d have been a couple theaters over, seeing if I wanted to sing here today and tomorrow, tomorrow, about the remake of Annie.

And so, yes, when Robin as rough rider Teddy and Mizuo Peck as his lady Sacajawea waved farewell to Ben Stiller’s Larry Daley as they tied up this sprawling comic caper written by David Guion and Michael Handelman and directed by Shawn Levy, I indeed got the lump in the throat.

When Levy’s credits rolled — not immediately after that wave, mind you, because I did not spoil the actual ending by describing that goodbye scene at Museum of Natural History in Manhattan, this being Hollywood, and all — there indeed was a tenderly worded tribute to Williams, of whom since his shocking death in August at the age of 63 we’ve discovered was suffering from Parkinson’s disease even while he was making this film. (First there was a goodbye to Mickey Rooney, who had a small part as the bitter returning guy Gus. Legendary actor Rooney died in April at the age of 93. And, yeah, we got to see Dick Van Dyke deliciously in that scene, too, and he’s still here with us, knock on wood.)

During the film, Williams surely was fun as Teddy, romping through another museum with this cast of familiar silly come-to-lifers under the guidance of the the security guard who discovered their secret back in the original and polished it up in the first sequel. In this one, they’ve discovered that their power is fading, and Larry sleuths the cause down to London, where they cavort with a new cast of rebirthers that includes Dan Stevens as Sir Lancelot, Ben Kingsley as a Pharaoh and Rebel Wilson as a security guard. Add the returners played by Owen Wilson, Steve Coogan, Patrick Gallagher, Rami Malek, Crystal the Monkey and Ricky Gervais to the mix, and there’s enough adventure and go-wrong for everybody. Throw in the natural growth and life decisions of Larry’s son Nick — now played with arch teen coolness by Skyler Gisondo — to the mix, and there’s enough plot and slapstick to keep the 97 minutes marching right along crisply.