In gratitude for the service of our veterans

Editor’s note: Monday is Veterans Day. Why Nov. 11? Because hostilities in “the war to end all wars” stopped at the 11th hour of the 11th day of the 11th month of 1918. But that war didn’t end all wars. Indeed, a number had to be added to distinguish it from the next world war. The day honors those who serve. In Syracuse, artist Sharon Blair–whose son, Marine Cpl. Forest Blair, served overseas–has created these images to honor American veterans.  The words that follow are Blair’s, too. Blair’s website is artisticimpressionsbyblair.com; her blog entries appear at marineparentsharetheirstory.blogspot.com. 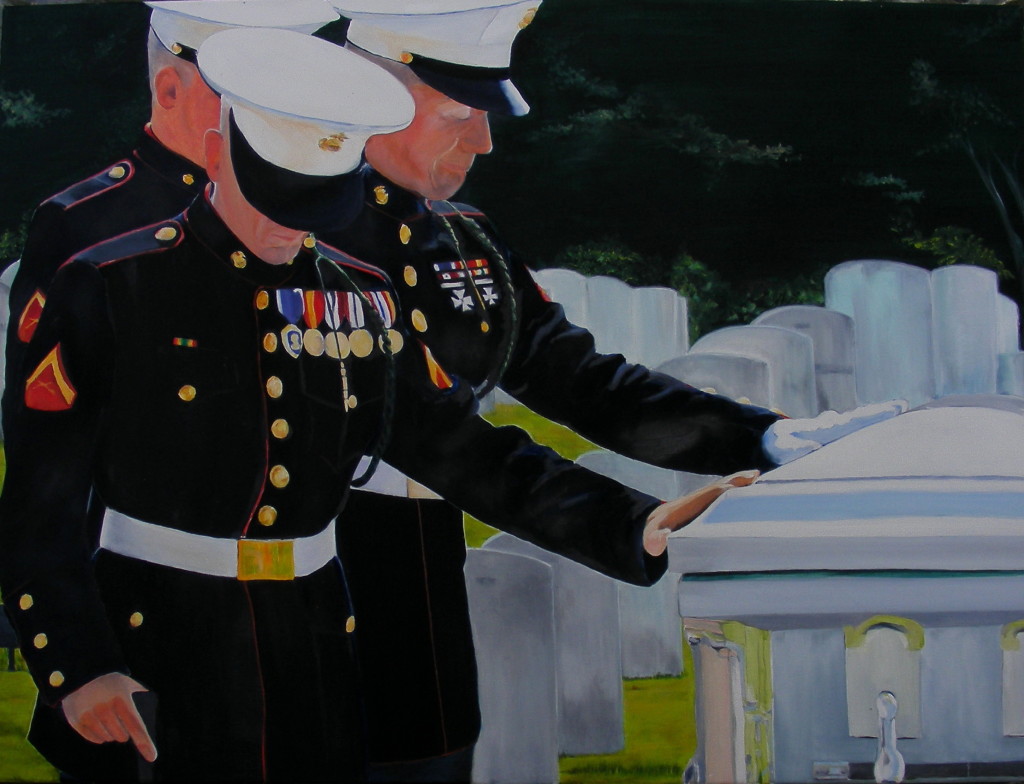 Grief. It is the only word for this scene. Penny Riley started on Facebook early on in that 2010 deployment. We would post “Missing my Marine,” and other parents would answer back with encouragement, posts like, “We are praying for you. They will call soon.”

Then the satellite phone was on the move, as posts would pop up: “Got a call from my Marine!” and our joyous posts back (for we, too, were going to receive a call from our sons).

Penny had posted an Associated Press photo for her profile picture. I had been away for a weekend in July when I opened my Facebook pages to see a new profile picture of Marines taking a flag-draped box off a transport. Penny’s caption: “There goes my hero. I just wanted to jump over the barriers and run.”

Every parent’s fear was to open the door to two Marines while our sons and daughters were on deployment. Three of our sons who were injured and sent stateside were called to this burial scene of their fallen brother, Lance Cpl. Gabe Rainey, USMC. Their ability to stay calm and their emotions in check, while all around them grieved, was extraordinary. And here at the burial scene was the point where they could let loose their own sorrow. Our parents looked at this scene and commented on its reality, “This could have been our son.” And our sons thought, “This should have been me.” 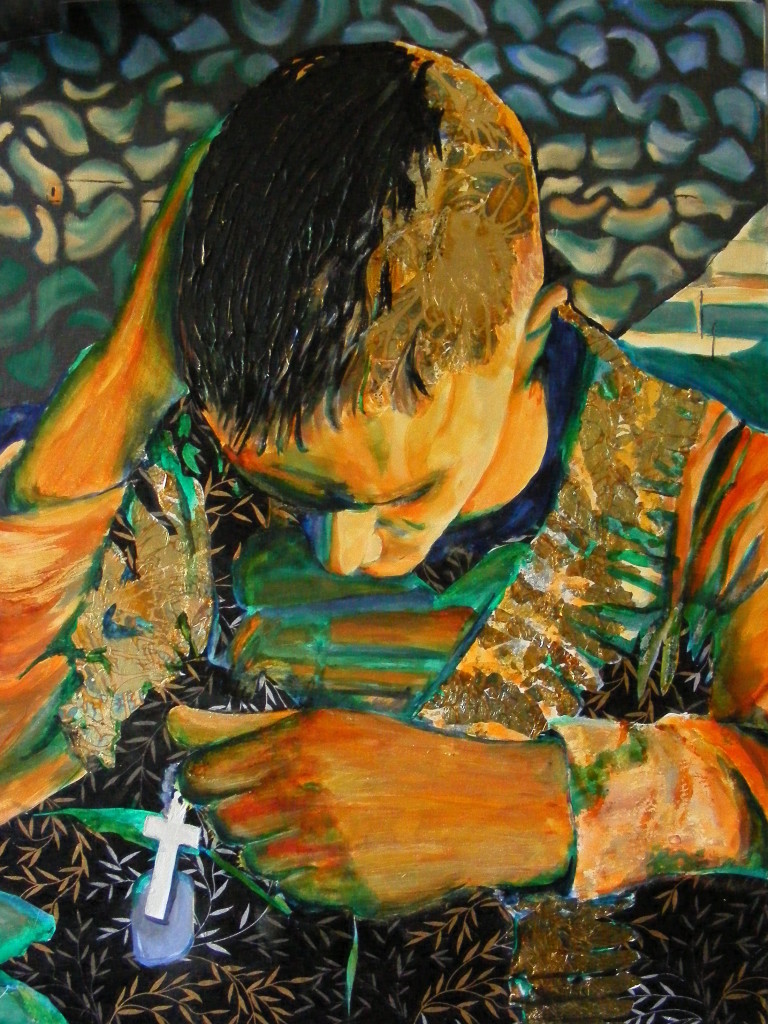 Every parent’s nightmare. Lunchtime at the Art Store in June of that first 2010 deployment as I began to sit down for lunch in the break room. A page: “Sharon, call on line one.”

Ugh! I thought and reached back to the phone.

“Forest! How you doing?”

“Mom, are you sitting down?”

“Yesterday, I got shot. I had a 6.2 milometer bullet go through my camel pack, around my SAPI plate and through the bottom of my vest. Mom, I’m OK. God’s got my back. Keep praying!”

That was pretty much the conversation over the satellite phone. The rest of my day was spent just realizing, “Oh my God.” (What could have happened.)

“And We Prayed” are two mixed media pieces that depict that miracle week for Forest and his platoon. So many people in the United States were praying for them. Our most powerful weapon was to pray, and I did often. So did my Marines. 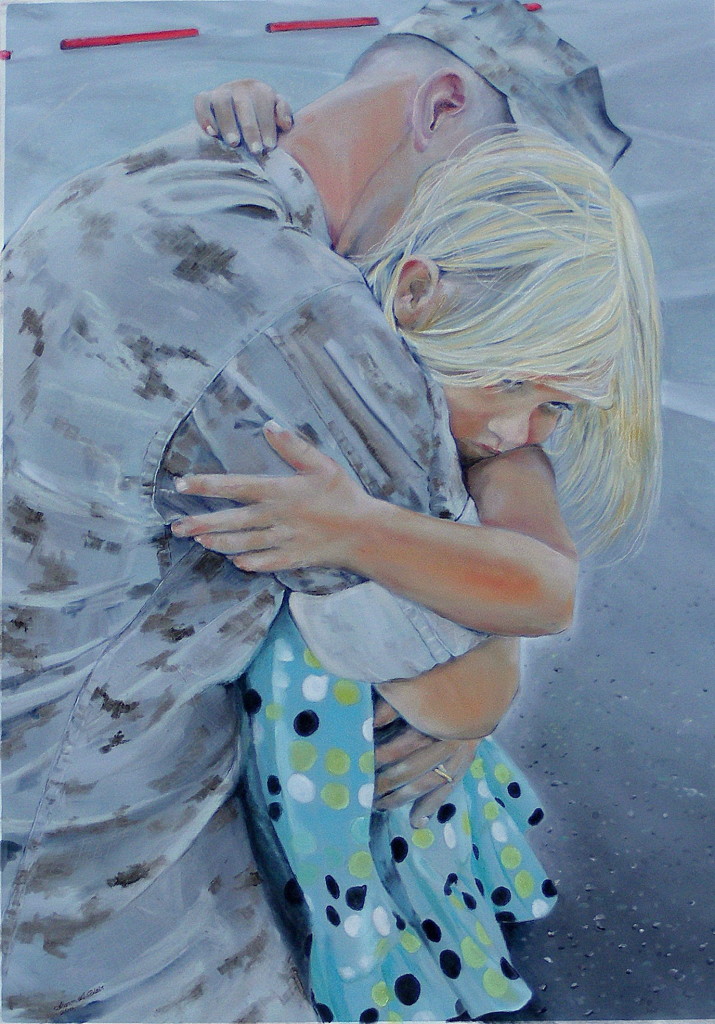 The day of deployment is a difficult and most stressful day for our military and their families. As a parent, we take in a deep breath, put on brave faces and begin to pray in a way we never have before; our sons will soon be in harm’s way.

Originally, I was going to focus on the emotion of the embrace. But many times, my paintings teach me more about the real story. In this case, I had to include the parking lot. One of my Syracuse Marine parent’s sons, Maj. David Schreiner, is hugging his daughter Addison. His head is buried in that hug. There is great emotion in both faces. He is noticing her polka-dot dress and hair fluttering in the breeze and the pavement below. In David’s mind, he is freezing into his memory this last picture that he will hang onto during the long months of deployment.

And it all began here in a parking lot. At this moment, he is in God’s hands; he trusts his return will also be here, in this parking lot. 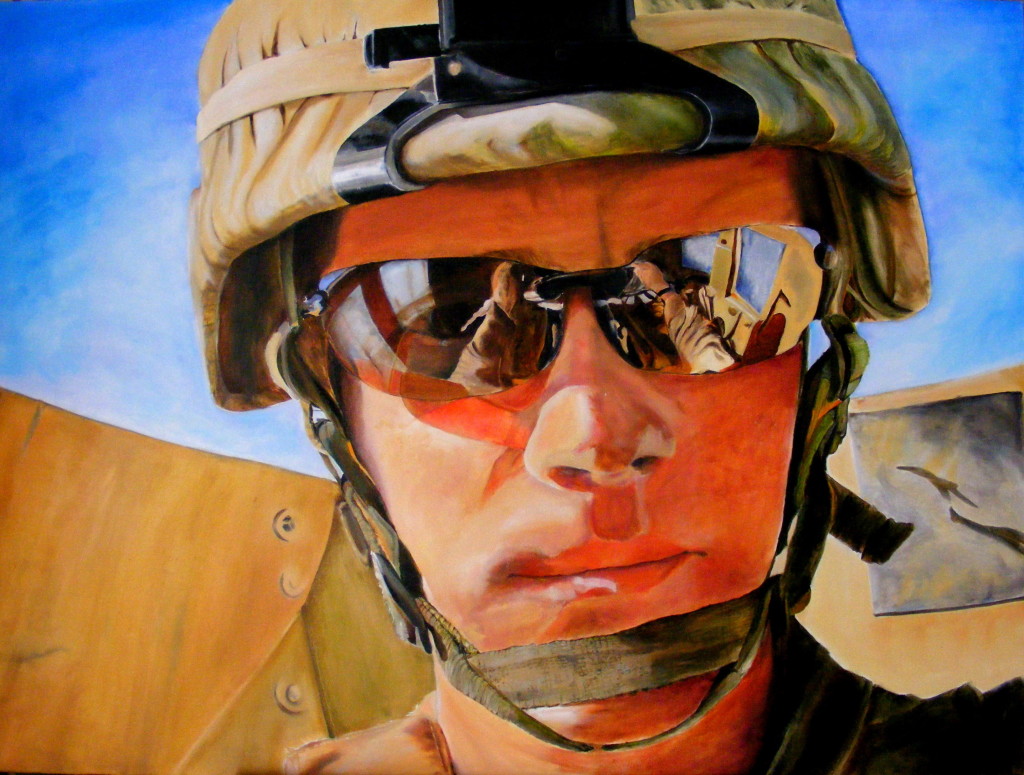 During the long months of his last deployment, my son, Marine Lance Cpl. Forest Blair, took this photo of himself. There was something I saw, underneath that reflection, deep within his pensive gaze. In my very civilian way, I set up a large canvas to serenely paint under big maple trees in my front yard.

In Forest’s very military way, I could see within that reflection the “everydayness” of completing long patrols with firefights, finding IEDs and jumping all those canals. What a contrast to my “everydayness”!

Up in that turret, in the Afghanistan war zone, I could see under those sunglasses just enough to know what he was thinking:

I knew, as did his brothers. Forest, like so many out there wonder if anybody cared that he was out there.

The answer from every parent: “Oh, yes, Forest. We care very much.” 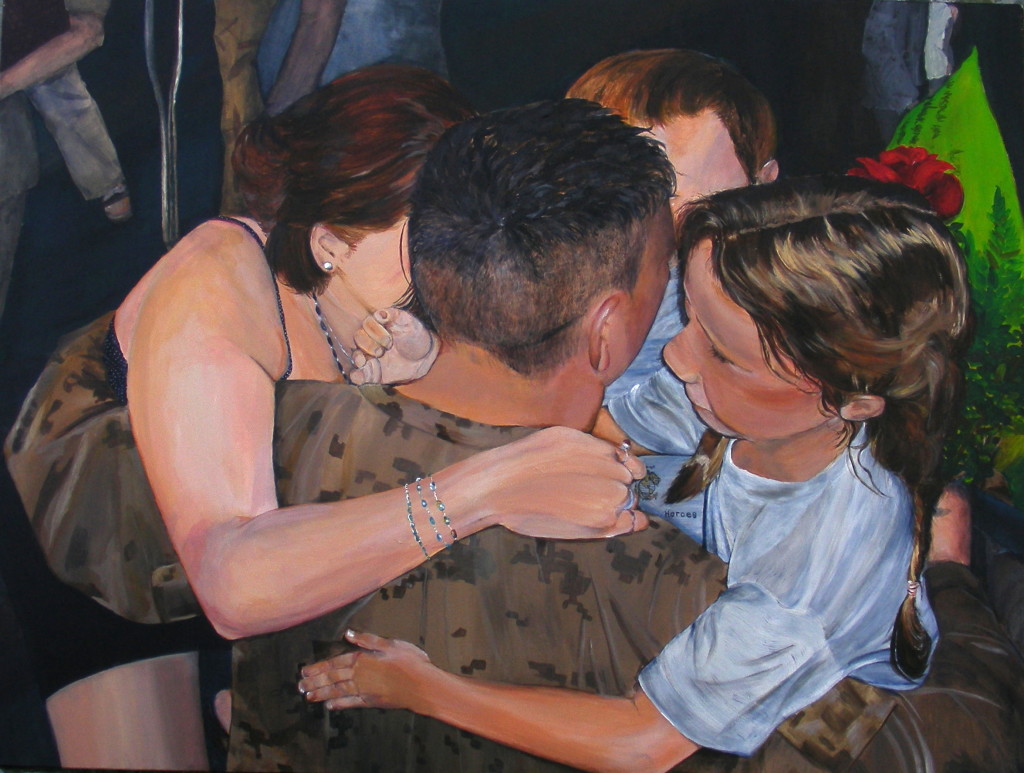 We waited and we prayed–daily, hourly and sometimes minute to minute–right up until this moment. This is a life event, like graduating high school and college, getting married, having children.

Homecoming hug is bigger than most of those, because when a battalion comes home, the number of hugs are like none other. About 1,000 warriors are grouped together in three waves with two to three companies in each. Attached to each Marine is a family of mothers, fathers, sisters, brothers, wives, fiances, babies, children, grandparents, aunts, uncles, cousins and dear friends.

We make banners to hang on the fences on base and then decorate our cars. The anticipation is unbelievable. A happy time, they are back in our arms again. How that side-body-slam hug feels stays with me this very moment.

For the second consecutive year, Dr. Joan C. Laura will offer free dental care to the first 40 veterans to come to her Eastwood Dental Office on Veterans Day.

Each veteran can choose between a routine dental cleaning, a restorative filling or an extraction. To receive the care, veterans will have to show proof of their status and complete a brief medical history.

“No matter what branch of the military they served in, they are all heroes,” Laura says. “And we want to honor that here.”

Laura’s father, who was a captain in the Army during the Korean conflict, started the practice, and they worked together for eight years before he retired. Anthony Ross, Laura’s grandfather, also served, in the Army Air Corps during World War I.

“My parents instilled a strong sense of patriotism in each of their kids, and this is the least I could do for those that served our country,” she says.

Restore the Magic
The Running Man
To Top