Sunday Dinner varies with an interchanging cast of characters

It was in the later part of the evening when Christina stated that she wanted to raise her family in a neighborhood like “This One,” referring to the neighborhood where the seven of us were having dessert. “This One” is the suburban, borderline boonies neck of the woods of southern Onondaga county where our families have referred to as “home” for the past 30 years.

This is something we strive for: this life.

Being family-oriented is important to me. Sunday Dinner is something my future wife will have to become familiar with if she isn’t already. There have been some lucky exes who have attended Sunday dinners in the past. Should history repeat itself, I’ll hopefully meet someone who enjoys the thought of attending. I do talk about my family a lot, and I have no embarrassment toward my folks.

Sunday Dinner varies with an interchanging cast of characters, family and friends, who have all played a significant part in the Malone family’s history.

I cannot be certain with saying that we’re “lucky” – since us kids had nothing to do with ending up in the middle-class suburb. There was not any blatant, purposeful parental reminder that we should have counted our lucky stars either. We lived by making mistakes, hoping we’d learn from them.

This, not because of age, is why our parents have grey hairs.

And most of the time our parents didn’t know where the hell we were. It was not their fault, but that of their sons. 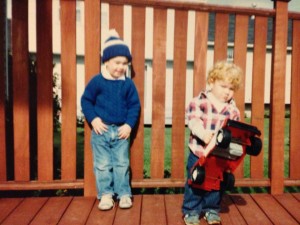 My mom reiterated the story about how my father would come home from work, wondering where we were. She’d call Dan’s parents’ house, and she’d ask his mother where we were. The answer: over at another friends’ house (because she hadn’t seen us all day). However, our elusive tendencies, as keen as they were, are not the basis of this. The point is that the “adults” still have the ability, after all these years, to rub our “kid” faces in our shenanigans.

This calling out is woven throughout the evening, beginning with light fare and through dinner and dessert. Parting shots are taken as farewells. We late 20- to early 30-year-olds still revel in the conversation topics of adult nature. The joys of securing a spot at the adult table. And the drinks … well, those are also very adult; they often allow the conversation to unfold freely, fluidly.

On Sunday, I came home from a typical afternoon. The chili was kept warm in the pot on the stove. I made sure, three times, that the batch turned out delectable, dirtying as many spoons and leaving them in the sink with each taste. I played with Lou for a little bit, scratched under his chin and then his chest and then his belly, and then that’s when he decided to play rough: as he grabbed my hands with both paws, biting down on my knuckles as his back legs furiously kicked and scratched at my wrist. The rest of the evening, until he was brought in to join the party, he was wide-eyed and questioning my mother as to why she brought him into such a large gathering. He eventually forced himself down and scurried off, as his belly swayed.

Dan’s parents ventured over for a pre-meal cocktail hour accompanied by chips and salsa, pepperoni, cheese and crackers. Dan and Christina entered in soon after. The chili was dished out, we got our fill; but, as always, dessert took everyone by storm. Dessert is always forgotten about when you have a warm dinner. There is a tendency to eat more than intended.

The conversations transitioned smoothly, beginning with my mother’s post-dinner ghost story. Whether the woman, who was walking outside in the rainy weather, made it around the cul de sac or not is still uncertain. The conversation led us to the topic of the murder, years ago, on Howlett Hill Road. The woman asked about the candle that sat in the window; it was placed there and kept lit since the 9-11 terrorist attacks. The woman called my mother a kind soul before walking on, disintegrating into thin air.

My father asked, “Have you seen the movie Ouija?” This was part-smartass and part-knowing the question aggravates me, because it’s just plain obvious Hollywood pumped out a bullshit horror movie. But the ragging didn’t cease there, culminating with my former disillusion that “Fievel School” was actually “Bible School.”

But the conversation ventured to the present and future: bachelor parties and strip clubs. With my brother getting married this year, there’s a lot to consider as he is sent off into married life. Technically, according to Common Law, the two are already married, but ceremonies are necessary. For all of us friends and neighbors, there are a handful of us who have yet to walk down the aisle. 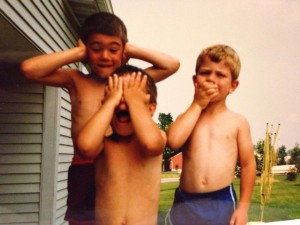 The topic of The Woods, our childhood playground, came up. Countless hours were spent exploring, nailing wooden planks into fallen trees, venturing out into “the wild” and sliding across ice-covered ponds, setting fires to keep us warm in the summer and autumn months. Our rebellions were quite docile; although, we did find ways venture back into trouble.

One day we friends will stand at the mouth of The Woods and wait a moment before venturing back in.

The binding camaraderie that enables family and friendships to outlast the test of time enables meeting up every once in a while to recognize what has been built throughout the years, distance permitting. These friendships outlasted the test of time, so the rest of the haul should be easy. Friends become family by default, whether it’s approved of or not. We have to be there for each other, look out for one another (especially if an apocalypse should present itself).

We have future weddings, kids, adventures in “adulthood” to look forward to. We have holidays and summer barbecues. There will be more Sunday Dinners.

We’re lucky, Sherwood Crew, and all those who can relate, even slightly.

To this, we raise our glass.