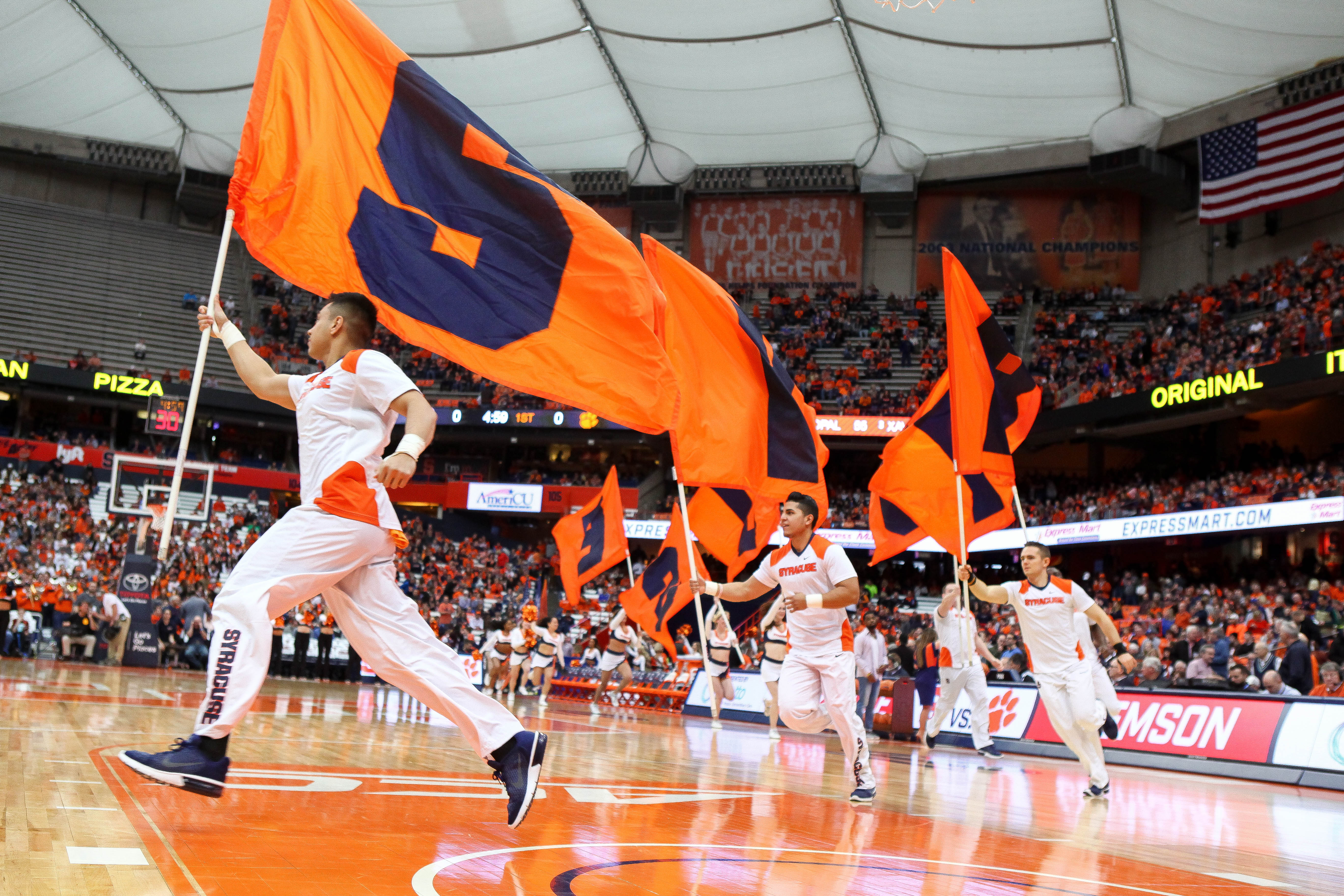 His team was finished, but Jim Boeheim wasn’t.

As the moderator started to wrap up Syracuse University’s news conference following SU’s 69-65 loss to Duke March 23 in the Sweet 16 of the NCAA Tournament, Orange coach Boeheim realized there weren’t any more questions coming from the media and said he wanted to say something.

Boeheim, who often comes across more critical than complimentary of his players, wanted the media members assembled in that room — and by extension the college basketball universe — to know that the defensive efforts that carried the Orange past Arizona State, Texas Christian University and Michigan State to the Sweet 16 were a byproduct of Syracuse’s grit, determination and will to win — not because the other teams had bad shooting nights. 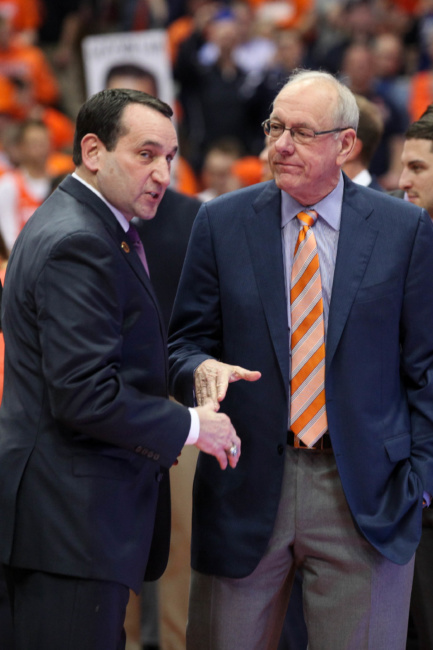 “Jim Boeheim is my dearest friend. I don’t have a better friend in coaching and he’s as good a coach as there’s ever been. So it was an honor to play him.” — Duke coach Mike Krzyzewski. (Photo by Michael Davis).

“With this group, I think that sometimes we forget that we had seven (scholarship) guys and one of them (Bourama Sidibe) has got a bad knee,” Boeheim said. “So for these guys to do what they’ve done, I think it’s an amazing thing.

“These guys did it; it wasn’t any team playing bad or shooting bad. Good teams that shoot 40 percent from (3-point range) don’t shoot 25 percent from the three, unless you make them. Unless you get them away from the shots they want to take. And these guys have done that for four straight games, and I don’t think you can give them enough credit for what they’ve done defensively.”

After praising Duke’s offense and lamenting Syracuse’s late mistakes on the offensive end, Boeheim made one more closing argument defending the grind-itout style that defined this year’s team.

“What these guys have accomplished, I don’t think you can give them enough credit to beat the teams we’ve beaten and played the defense the way we’ve played it,” he said. “Four teams in a row don’t shoot bad. Maybe one or two, but four? I don’t think so.

Counting Sidibe and Moyer, the Orange finished the season with seven scholarship players, plus former walk-on Braedon Bayer, who was given a scholarship in December and ended up playing key minutes in SU’s NCAA Tournament win over Michigan State. As the injuries mounted, guards Tyus Battle and Frank Howard and forward Oshae Brissett had to play nearly every minute of every game in the grueling Atlantic Coast Conference and then the postseason.

As in recent years, the Orange found itself on the NCAA Tournament bubble and most “bracketologists” had Syracuse among its first four out of the tournament. But a win over then-No. 18 Clemson in the Orange’s final regular-season game likely pushed SU into the tournament as the Orange reached 20 wins, including road wins at Miami and Louisville, and had none of the really bad losses that spoiled the resume of last year’s team and sent it to the National Invitation Tournament.

Even then, the Orange received the 36th and final at-large berth and had to play a “First Four” game against Arizona State March 13. Over five days, 11th-seeded Syracuse limited fellow 11-seed Arizona State, No. 6 seed TCU and No. 3 seed Michigan State to under 60 points each as the undermanned and offensively challenged Orange zoned its way into the Sweet 16.

“Like coach said before, this year could have been bad with the adversity that hit, but we fought through,” Howard said. “Guys played with heart and I’m proud of each and every one of these dudes and proud of myself and proud of coach.”

The improbable run ended in Omaha, Neb., where No. 2 seed Duke and Coach Mike Krzyzewski outlasted the Orange mostly because of a nine-point edge in free throws (20-11) and a 10-point edge (18-8) in points off turnovers. The Orange shot well overall (49 percent on 25-for-51 shooting) and limited the high-scoring Blue Devils to 39.3 percent shooting (22-of-56).

“We beat a really good team tonight. Battle is such a good player, and Jim is my dearest friend,” said Krzyzewski, who in 2006 asked Boeheim to be his assistant coach for the USA Basketball team. “I don’t have a better friend in coaching and he’s as good a coach as there’s ever been. So it was an honor to play him; we feel very good about the win because we beat not only an outstanding team but an outstanding program.”

As always, the offseason will be an intriguing one as Battle, and perhaps Brissett, mull their NBA opportunities. Battle, who finished the season with more points (712) than any other sophomore in Syracuse history other than the legendary Dave Bing, will likely enter his name in the draft without hiring an agent. That will give him the option of returning to school.

Brissett, a 6-8 forward who averaged 14.9 points and 8.8 rebounds per game, is oozing with NBA potential, although he could probably use another year of college to refine his skills. Sidibe will undergo surgery soon to ease the painful effects of knee tendinitis, while Washington’s recovery from surgery to repair his ACL is progressing and he should start playing again this summer.

And now that scholarship restrictions caused by NCAA violations have run their course, the Orange will have a full complement of 13 scholarships and will welcome East Carolina transfer forward Elijah Hughes and three promising freshmen (forward Darius Bazley and guards Jalen Carey and Buddy Boeheim) — perhaps resulting in a player transferring or being redshirted.

But all of that is for another day. For now, Syracuse fans should follow Boeheim’s lead and celebrate a team that gave them more than they could have ever expected.

“These guys have had an incredible end of the year,” Boeheim said. “I’ve never been any more proud of a team for what they’ve done in this last 10 days. To go and play in that first game and be able to get that and to beat TCU and Michigan State, these guys have a tremendous amount of courage.”