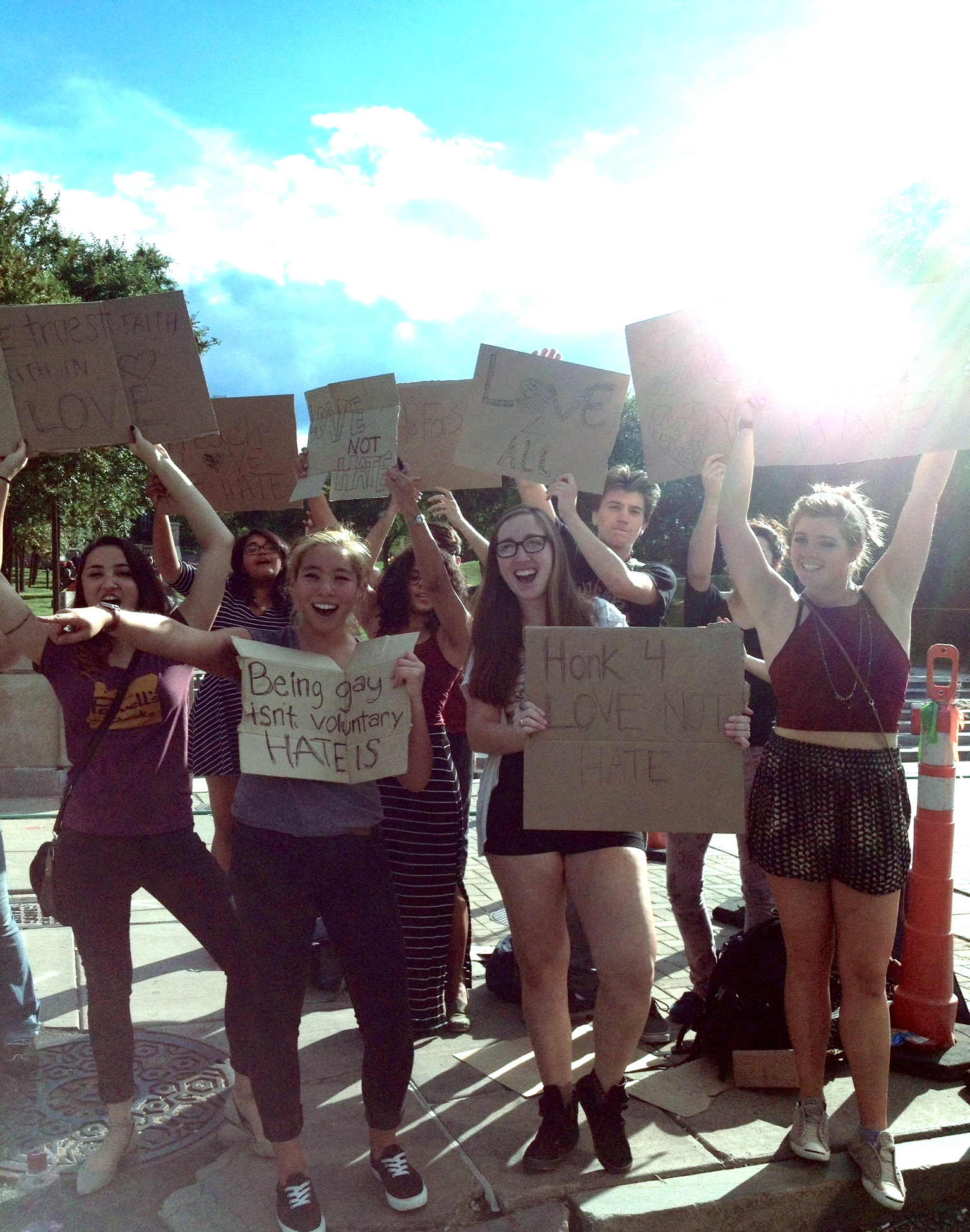 “Thousands of homosexuals are content with who they are.”

Syracuse University students led an impromptu protest against homophobic messages on campus Wednesday. Jim Deferio, a Syracuse resident and devout Christian, carrying a 10-foot sign that claimed, “Thousands of Ex-Homosexuals Have Experienced the Life-Changing Love of Jesus Christ” stood on Waverly Avenue next to the Schine Student Center. In a tan baseball cap that read, “I love Jesus,” he said into a microphone that homosexual people are “sinners” and “need help from Jesus Christ.”

Brady Tannehill, a senior at SU, passed by Deferio on her way to lunch. “I was really aggravated,” she said. While Tannehill was eating, she received a text message from her best friend, a student at Suffolk University, who was upset because she was called a homophobic slur by other students several times this week.

“I always say I’m going to do something, but I never do,” Tannehill said. She immediately grabbed a marker and paper from a nearby computer lab and wrote, “Thousands of homosexuals are content with who they are.” She arrived at the same corner as Deferio at 1:30 p.m. and silently stood next to him. 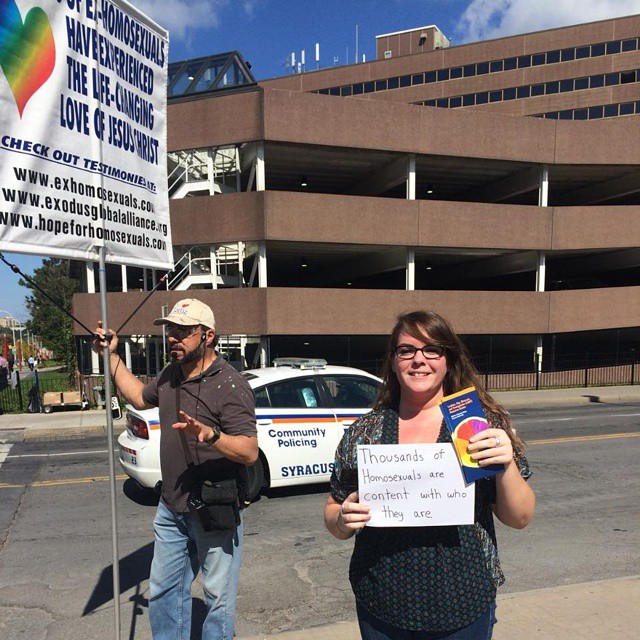 After students noticed Tannehill, more than a dozen flooded the sidewalk beside her. The students rushed to Starbucks on the next block and asked if they could have leftover boxes in the back. With the cardboard, they then made makeshift signs with only a Sharpie. A protest erupted.

Tannehill said she felt proud that other students joined her. “At first, I was nervous standing there alone because I didn’t know what he would say or do to me,” she said. “Then, when people started thanking me and hugging me for being there, I felt like I did what I was supposed to do.”

The students held up signs that read, “Preach Love not Hate,” “Equality,” “SU Loves You,” and “The Truest Faith is Faith in Love.” One male student held up a sign that referenced Emma Watson’s latest campaign for gender equality, reading “#HeForShe.”

“This is not a representation of our campus and we’re not going to tolerate it,” said Abby Leigh Charbonneau, a junior and one of the student protesters.

Deferio said that he has been demonstrating publicly for years. After he demonstrated on the SU quad and was forced to leave in 2006, he said he now stands on the perimeter of the University since it is a private institution. Deferio has been traveling around the country and has protested at 59 other colleges and universities. He describes SU students as the most vocal and outspoken. “Syracuse students are close to being the worst,” Deferio said.

Charbonneau said that she attempted to engage in conversation with him, but he instead told her that he would not debate with a “midget.” She said she took great offense to this, but that it also strengthened their solidarity. “We decided to come out here and spread our own message of love and acceptance,” said Charbonneau. 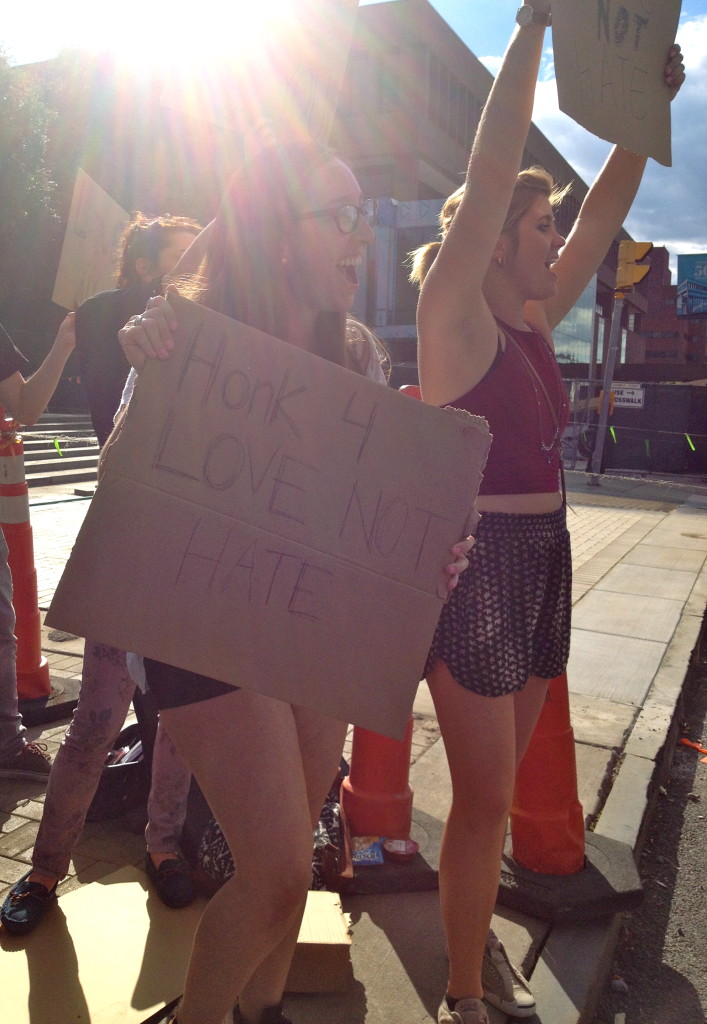 Other passing students and faculty praised the students for their efforts. One sign read, “Honk for love, not hate,” and buses and cars honked constantly. They cheered when each honking vehicle passed by. Before the group gathered, one student dumped a canister of glitter on Deferio. The student then crossed the street and blew a kiss.

Last week, SU students led two other rallies. On Sept. 17, students expressed their concern with the change to sexual assault resources. It was part of a movement that began in May when Chancellor Kent Syverud announced that the Advocacy Center would close in June and reorganize into the Counseling Center, Office of Health Promotions and Office of Student Assistance. During the rally, they marched to Syverud’s office and handed him a petition with 8,000 signatures. Two days later, students and alumni protested recent cuts to Posse, a national youth leadership program, and other scholarships for minority students. “Students are feeling more empowered to make our voices heard,” Charbonneau said.

Rika Inouye, a photojournalism junior, agrees that students are refusing to be bystanders. “This is our campus,” Inouye said. “If we don’t do anything, then it will make people think that hate speech is OK. We are not going to stand for this.”

Although many of the students had classes, they remained protesting. “We know that we’re not going to change his opinion in one afternoon,” said Inouye. “We want everyone else to know that his views aren’t SU. We want everyone to feel welcome here so that they don’t feel afraid on campus.”

After nearly five hours, Deferio finally rolled up his sign and tucked away his microphone. The students cheered and waved their arms and announced that SU is “no place for hate!” over and over until he faded from view.

Lonely at the Top
Oprah Winfrey to Visit Newhouse
To Top