Gulp this: GOP chair Tom Dadey hails the Donald as a great family guy and a successful businessman.

When Donald Trump came to Syracuse to speak at a March 11 fundraiser for the Onondaga County Republican Committee, he was introduced by County GOP chair Thomas Dadey in glowing terms.

First Dadey praised Trump as a “great family guy.” That might have come as a surprise to Ivana Trump, the Donald’s first wife, who left him after the public humiliation brought on by Trump’s page one tabloid affair with model Marla Maples, who became the second Mrs. Trump. Maples was eventually thrown under the bus by the voracious Donald for Czech supermodel Melanie Knauss, a woman 24 years his junior. Trump and Knauss were an item long before the ink dried on his 1999 divorce from Maples. 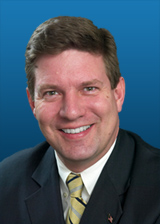 “I’ve seen him with his kids,” said Dadey when asked why he chose to praise Trump’s brand of family values. “He has several kids involved in his business. Maybe I should have said he is a great father.”

The GOP styles itself not only as the party of family values, but the party of business and fiscal responsibility. But what kind of business record does Donald Trump have? No one knows how much Trump is worth. Forbes magazine estimated his net worth in 2013 at $3.2 billion; a New York Times article by Timothy O’Brien quoted business associates of Trump who placed his worth between $150 million and $250 million.

An accurate figure is hard to arrive at for two reasons. One, for all his talk of running for president or governor, Trump has never tossed his hat in the ring, which would require filing financial disclosure forms. Two, Trump has repeatedly sued writers, including O’Brien, for libel when they published net worth figures he didn’t like.

This much is known: Trump companies declared Chapter 11 bankruptcy on four occasions between 1991 and 2009. According to Forbes, each of these had to do with his Atlantic City resorts and casinos. With each bankruptcy, the Donald was left with a smaller  share of equity in the company. Each time, the motive for his bankruptcy petition was the same: He was overextended. In other words, he borrowed beyond his means, which would seem to run contrary to the Republican dogma of fiscal conservatism.

“How many successful businessmen have made some mistakes?” Dadey said when asked if Trump’s record was consistent with the Republican party’s devotion to fiscal responsibility.  “I’ve gotten to know the guy a little bit. I’m standing by my introduction.”