A great region near a great lake

The Fulton-Oswego region is filled with events to celebrate the few warm months sans lake effect snowstorms, as residents crawl out of their hibernation and party hearty. A half-hour drive from Syracuse on Interstate 690 to 481 will take you straight through the heart of Fulton into Oswego, and, if you keep going, into the depths of Lake Ontario itself. 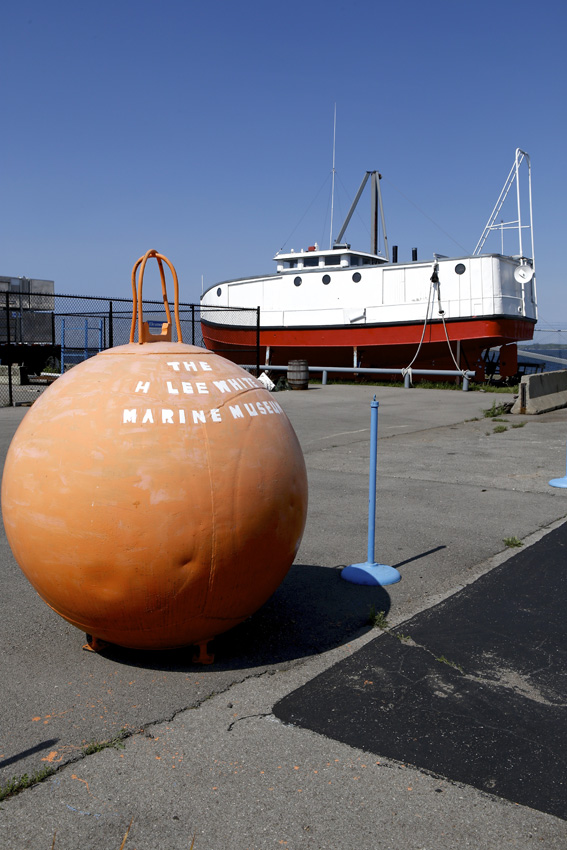 One planned event will not be happening, alas. The Nina and The Piñta, replicas of Christopher Columbus’ tall ships, will not find their way to Oswego’s H. Lee White Maritime Museum, 1 W. First St. The complex, however, boasts a slew of exhibits highlighting more than 400 years of maritime history, the national historic landmark World War II tug the LT-5, the New York state Derrick Boat 8 from the Erie Canal system and the Eleanor D, the last U.S. commercial fishing vessel to work Lake Ontario.

On July 22, the museum hosts a Kids’ Pirate Day, featuring games, music, pirate grub, tours of historic vessels, and a scavenger hunt. The event is recommended for ages 2 to 12. Tickets are $15 and available by preregistration.

For those who aren’t interested in walking around a topside museum, try scuba diving a shipwreck in Lake Ontario. The David W. Mills, a cargo vessel in the 19th century, ran aground on Aug. 11, 1919. The ship’s final resting place is the bottom of the lake, 4.5 miles west of the Oswego Harbor Lighthouse and a half-mile offshore. The best times to dive are from early June to late summer, so gear up for a deep dip that is suitable for a basic open-water diver. For more information, contact the Oswego Maritime Foundation, 342-5753, or visit their Facebook page.

For the landlubbers, both Fulton and Oswego feature homes from previous eras that have been turned into museums. The residences offer a change from the subdivision-laden Salt City suburbs while reminding visitors what architecture used to look like.

The Pratt House, 177 S. First St., Fulton, built in 1861, highlights the history of the former mill town with permanent and changing exhibits. The museum is open Wednesdays through Fridays, 10 a.m. to 3 p.m. The museum does charge admission; call 598-4616.

The Richardson Bates House, 135 E. Third St. Oswego, is a museum of life in the 1800s and features nearly 25,000 artifacts, documents and photos. The first level of the house is preserved as the Richardson family knew it, while the second level displays the city’s history. The museum is open Thursdays through Saturdays, 1 to 5 p.m. Admission is charged; call 343-1342. 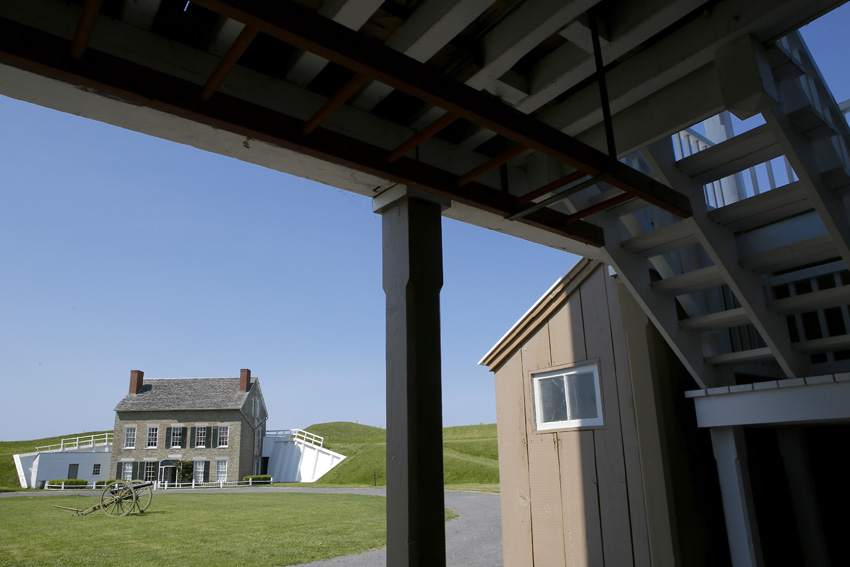 The nearby Safe Haven Museum, 2 E. Seventh St., Oswego, tells the tale of Fort Ontario as the only American refugee camp for 982 World War II displaced people. The museum tells the stories of the people housed at the camp. The refugees stayed at the fort from August 1944 to February 1946. The museum is open Tuesdays through Saturdays, 11 a.m. to 4 p.m. Admission is $5 for adults and seniors, $3 for students and children. Call 342-3003 or visit their Twitter page for more information.

Also in the area, the art exhibit Printmaking Unraveled displays prints created by 12 Oswego High School students, who were the first in 15 years to take a printmaking class at the high school. The free exhibition runs through June 27 at the Tyler Art Gallery at SUNY Oswego Downtown, 186 W. First St., Oswego. The gallery hours are Wednesdays through Saturdays, noon to 5 p.m.

For those in the mood to drown some worms, check out the sixth annual Lake Ontario Counties Summer Derby from June 13 to July 26. A grand prize of $12,500 is offered for biggest salmon caught. For more information, visit loc.org.

The CNY Arts Center, 11 River Glen Drive, Fulton, brings people together for events such as a summer painting series, an art gallery, performances and a writer’s café at 6 p.m. the last Sunday of each month. The center’s summer camp for children offers classes in dance, theater, cooking and art.

The center will also mount two stage productions this summer. Neil Simon’s three-act comedy Plaza Suite runs June 12 to 14 and June 19 to 21, followed by Much Ado About Nothing, Shakespeare’s play about love, marriage, lies and deceit, Aug. 7 to 9 and Aug. 14 to 16. Admission is $12 for adults, $10 for students and seniors. 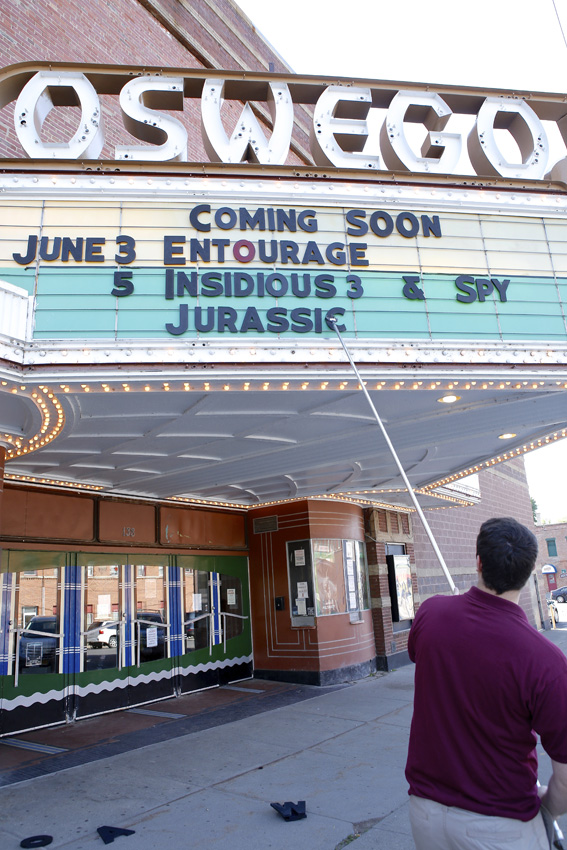 Two classic movie bijoux can be found in the area. The first-run, art-deco Oswego Cinema 7, 138 W. Second St., Oswego, has been in operation since January 1941 and is now owned by Fayetteville-based movie magnate Conrad Zurich. The theater has had its original one-screen design subdivided to now hold three screens in the bottom half and two screens in the former upstairs balcony, plus two additional theaters constructed in the 1990s on the building’s right side. The five first-floor theaters also have posh reclining seats. Call 343-6361 or visit zurichcinemas.com.

Meanwhile, the Midway Drive-In, 2475 West River Road (Route 48), Minetto, suffered a major setback when its screen tower, constructed in 1948, was destroyed during a July 2014 rainstorm. Thanks to a community fundraising campaign, the theater was able to purchase a new screen, which was up and running by Labor Day weekend. The ozoner has room for 600 cars, and the lot can get pretty full given the right nighttime weather and the popularity of owner John Nagelschmidt’s triple-feature bookings. Call 593-0699 or visit midwaydrivein.com.

The region is also home to several festivals and fairs. The July 11 Paddlefest features two courses — one long and one short — for community members to mount their canoes and kayaks and paddle from either the Fulton or Minetto locks. The longer of the two courses is 10 miles and takes four to six hours to complete, so it is not for the faint of heart. The event concludes with “Rock the Lock” at Wrights Landing in Oswego, featuring food and live music. Visit oswegopaddlefest.com for more information.

The smaller scale Fulton Jazz Festival is set for Aug. 7 and 8, 5 p.m. to 11 p.m. The two-night affair features area musicians bringing cool jazz on hot nights to the shore of Lake Neatahwanta, behind the Fulton War Memorial on Route 3. Call 598-2070 for details about the free festival.

And the Oswego Dragon Festival on Sept. 12, 9 a.m. to 4 p.m., at Oswego’s Breitbeck Park presents teams of 22 rowers as they race in dragon boats. The event, which also serves as a fundraiser for the Oswego YMCA Strong Kids Campaign, features vendors, music and activities for kids. For more information, call the Oswego YMCA at 343-1981 or visit oswegodragon.com.