Deep-fried everything, food on sticks, frozen treats, hot roast beef sundaes, wine slushies. When it comes to food and drink, the New York State Fair is an oasis of opportunities to indulge — unless you’re a vegan.

Joel Capolongo has stayed away from the State Fair for many years because for him, it’s a food desert. Other than baked potatoes, greasy fried potatoes and falafel, he says there’s little for vegans to eat.

But that’s about to change. Capolongo and Nick Ryan, co-owners of Strong Hearts Cafe and Strong Hearts on the Hill, Syracuse’s only all-vegan restaurants, are set to debut their State Fair venue from Thursday, Aug. 27, through Sept. 7. It will be located in the southeast corner of the International Building, across from Hofbrau Haus.

“Our customers have been telling us for years that we need to be at the fair,” Capolongo says. “We’re really excited to be there this year.” 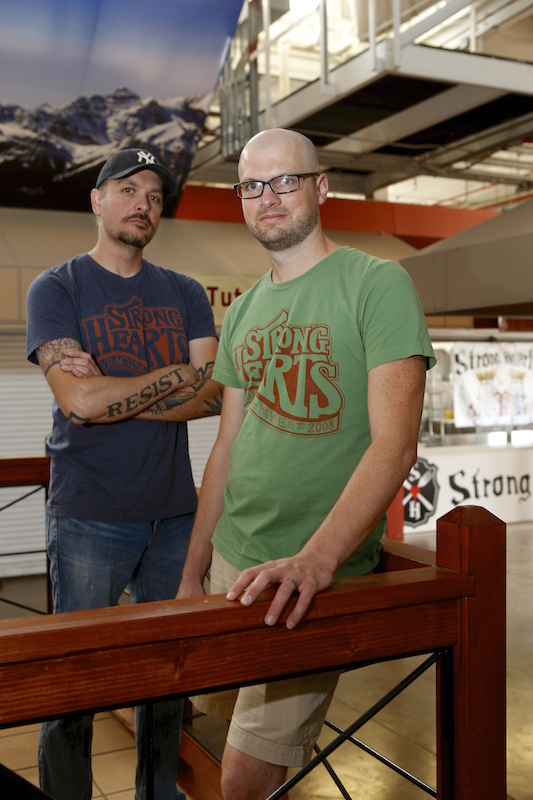 Strong Hearts was selected to become the fair’s first all-vegan food stand after the expo put out a request for proposals earlier this year for vendors to cater to vegetarians and vegans. In its proposal, the Strong Hearts owners said they would offer a special State Fair milkshake. Soy-based shakes are one of the most popular draws at both restaurants, and there are more than 40 on the menu.

Strong Hearts will also feature about 10 more signature milkshakes, plus more hearty café offerings. In keeping with the tradition of deep-fried fair fare, Capolongo says Strong Hearts will have deep-fried vegan chicken wings (soy based and gluten free), both Buffalo-style and barbecue. They also plan to offer a vegan version of a Philadelphia cheesesteak sandwich (made with shredded seitan), a vegan chicken Parmesan sandwich, vegan Italian sausage and Buffalo tofu.

Feel like something green and leafy — a rare sight at the Fair? Strong Hearts will feature several salads, including a summer kale salad, Mexican quinoa salad and Buffalo tofu salad.

Strong Hearts serves Recess coffee, and for those after a caffeine fix, they’ll have Recess cold brew coffee and cold brew floats made with your choice of vegan ice cream.

Vegan or not, you’re bound to find something interesting and tasty to eat or drink. “Eighty percent of our customers aren’t vegan and aren’t vegetarian,” Capolongo notes. “They just like food. We appeal to people by offering very normal food that happens to be vegan.”

The stand known for its “You bring it, we fry it!’’ come-on has something new in store at this year‘s State Fair. Loosen your belt buckle for “The Defibrillator,’’ a half-pound deep-fried Angus burger topped with six strips of fried bacon, deep fried pickles and melted cheese, all wedged between two grilled cheese sandwiches.

It’s the creation of the aptly named Fried Specialties and it rates a mention in Food and Wine magazine’s online list of “New State Fair Foods We’re Excited (and a Little Nervous) to Try.”

The inaugural Taste New York Food Truck Competition debuts at the State Fair on Sunday, Sept. 6. About 20 mobile food operators from across the state will set up around Chevy Court with their trucks and offer $2 samples of their food for fairgoers.

Entrants will be required to use foods primarily grown and produced in New York state. Judges will sample each truck’s signature entrée to determine a winner of the judged portion of the competition. Fairgoers who purchase samples will receive a ballot to cast their vote for a People’s Choice winner.

Dennis Souva and Cindy Baker, co-owners and operators of the Chicken Bandit Food Truck, are bringing their Bandit-seasoned chicken wings to the fair. The wings are a spin-off of the chicken that Baker used to serve at the former McShane’s Restaurant in East Syracuse. They’re deep fried, then basted with a special (and secret) spice and seasoning blend.

“We’d like to put Syracuse on the map for chicken wings,’’ Souva says.