Keen audience members really do have some idea of what to expect when entering The Underpants at Syracuse Stage, even though many people have never heard of it. Steve Martin’s farce ran in New York City for only a month 12 years ago and has appeared fleetingly at colleges and regional theaters in the interim. 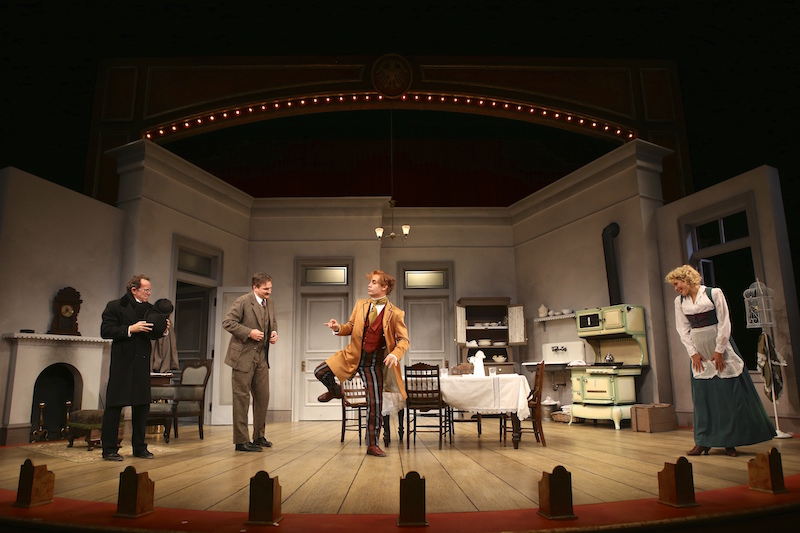 The other known quantity is playwright Steve Martin, once the self-styled wild and crazy guy, revealed in later years as a closet intellectual. His best-known stage hit, Picasso at the Lapin Agile, is really about the launch of modernism. So what was Martin looking for when he plucked from obscurity a rarely produced German farce from 1911 titled Die Hose by Carl Sternheim?

Before the action of the play a minor bureaucrat’s innocent wife, Louise Maske (Marianna McClellan), dropped her drawers beneath her long skirts while craning her neck to see the king (never called “kaiser”) at a parade in the industrial city of Dusseldorf. Cole Porter might have told us that, “In olden days a glimpse of stocking/ Was looked on as something shocking,” but during pre-World War I Imperial Germany he didn’t know the half of it.

German-speaking Middle Europe in the first decade of the last century was the cauldron that produced modern psychology. Literary evidence from the time implies it was also an epoch of vise-like repression. Frank Wedekind’s Spring Awakening, written a few years earlier, deals with many of the same issues with a heavy hand; Steven Sater and Duncan Sheik turned it into a hit rock opera eight years ago.

Wedekind, not coincidentally, was the third father-in-law of Carl Sternheim, a playwright who thought himself an heir to Moliere and has been compared to Noel Coward. Yet his clear affinity is with Georges Feydeau. He needs only three doors, not five.

Fennelly stages the action as a stylized ballet running at double speed. Martin and Sternheim’s lines draw sparks from the get-go, but what you see resembles a silent comedy, as if Mack Sennett had somehow been tutored in modern dance. We immediately grasp the power relationship between mincing Louise and her towering husband Theo Maske (Mark David Watson), even without the lines.

Theo fears that the scandal of her falling undies might threaten his lowly position. In the Katzenjammer-kid accent that all but one character uses, Theo laments, “I can’t believe this is happening to me.” A slave to convention, he proclaims, “If everyone just did their duty and nothing else, the world would be a better place.” 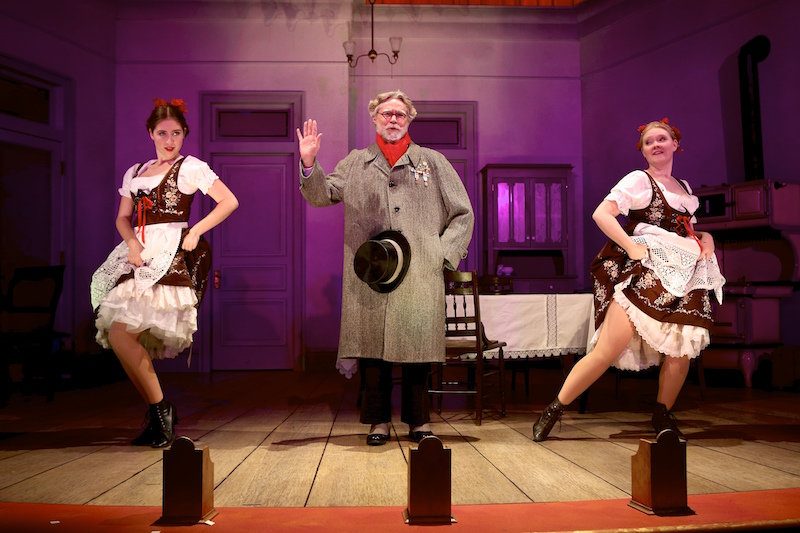 While the knickers were indeed reported in the press, the response is quite different from what Theo foresaw. Four curious men come knocking at the door, seeking to rent a room. The Maske apartment is a rather grim place, not unlike Ralph and Alice Kramden’s digs in the Bronx. (Scenic designer William Bloodgood favors gray on slate.) The Maskes need the extra income. Prospective tenants might be looking for bargains, but they quickly let on that they are more driven by lust, to get closer to the bloomers dropper.

Neither of the two tenants who can be named deliver on her promise. One is a vaguely Italianate, flamboyant, unpublished poet named Versati (Daniel Passer), who is largely talk without delivery. The other is a dark-clad barber named Benjamin Cohen (Michael Brian Dunn), who has to walk a half-hour from his shop. Sternheim, an assimilated Jew himself, is pushing the envelope for contemporary audiences, but anti-Semitism was a smaller beast in 1911.

Given The Underpants’ less than lustrous production history, Bill Fennelly’s hand is very likely the best that has ever guided it.