Shortly after returning to his City Hall office for a second, and last, stint, former Mayor Roy Bernardi reflected on being re-elected to a term-limited post.

“I can’t get anything done,” he said wistfully. “All the common councilors are launching their mayoral campaigns, and the developers are waiting to see who the next mayor will be, to see if they can get a better deal.”

“I’ve always felt that there was a limited amount of time that you have to do the kind of work you do,” she says. “So it’s an incentive for me and my administration to accomplish as much as we can.”

And to do it now. According to Miner, there is no thought to continue that work in some other elective or administrative position. 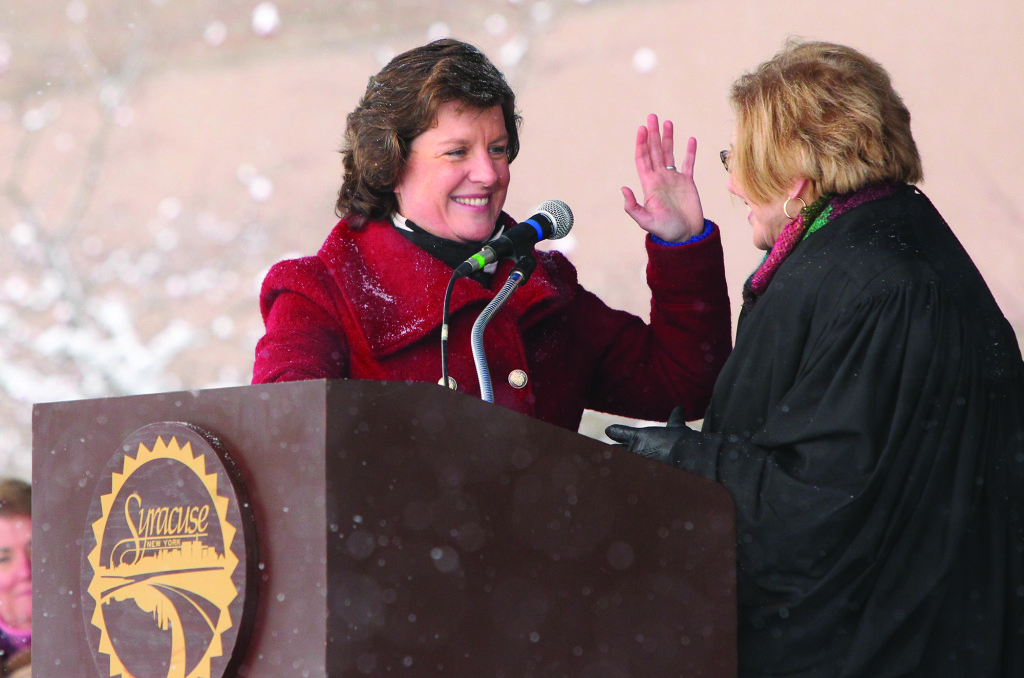 Lovelier the second time around? Will Miner’s first-term experience make the second more comfortable, enable her to keep both feet on the ground, bring her to a miracle of urban solution? Homeboy Jimmy Van Heusen, who wrote the lyrics for “The Second Time Around,” doesn’t have the words for this one.

“Around here, my anthem is Aretha Franklin’s ‘Think,’ ” she says. “Or maybe ‘Mustang Sally.’ ”

Nor does she reflect on what will come after her time is finished.

“I’ve got enough on my plate with what I’m doing right now for the next four years,” she says. 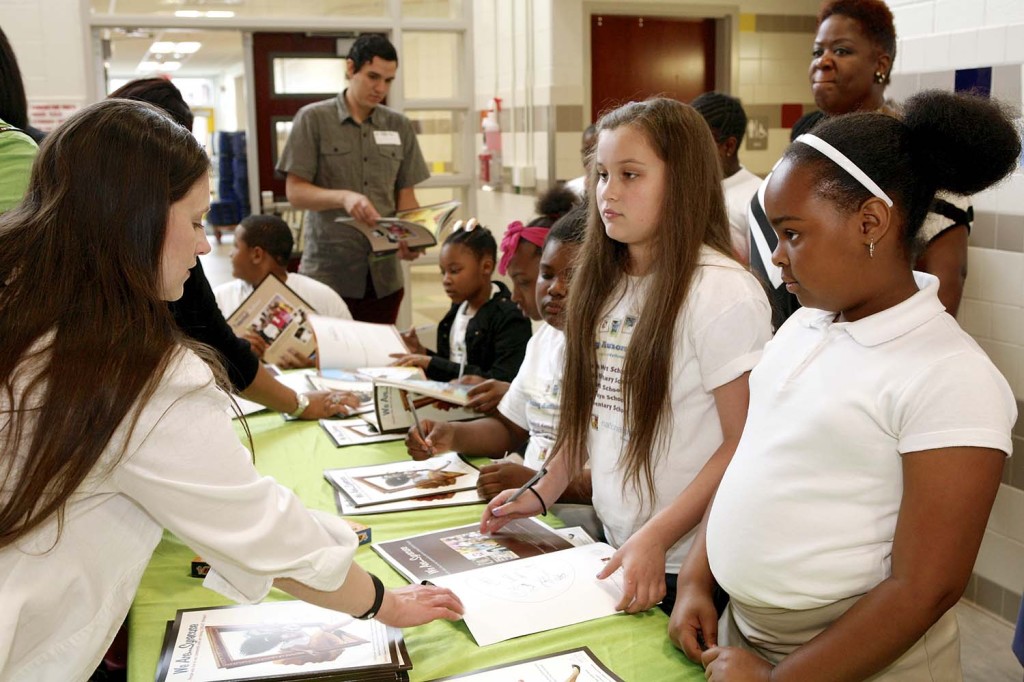 If Miner could wave a magic wand, however, and achieve triumph in her three most daunting struggles, she lists, “a meaningful solution on 81, Say Yes to be fully funded and operational and to have a meaningful infrastructure program funded for the city.”

Where would the money to wave the wand on the infrastructure come from?

It would have to come from a combination of federal government and state government, because it’s just not an issue that is impacting the city of Syracuse, it’s impacting all municipalities across the country. And if you can’t deliver water or have safe roads or bridges, then you’re going to have a real problem as a society functioning.

Discussions of projects in Syracuse often focus on the property-tax base shrinking, because of exemptions. Should we be looking for other revenue sources?

I think we need to worry about property tax. And we need to be very strategic when we think about what projects we want to exempt as a government and how we want to do that. For far too long, this community has just said any development is a good development, so let’s give them money. And that hasn’t worked. Over the past four years, instead of saying any development works, what we’ve said is downtown is important, it can be transformational, we need density, we’re going to incent development downtown. We’ve seen extraordinary results.

The same with the Inner Harbor. Waterfront property can be transformational to cities, and it has been in many places, and that’s why we’re incenting development there. Neighborhood corridors are important to pedestrians, and so we have a project where we are working with small businesses in our neighborhood corridors. Those are three huge assets we have that we believe can be transformational. There’s other development that is good development, but it’s not good enough for the entire public to waive property taxes. 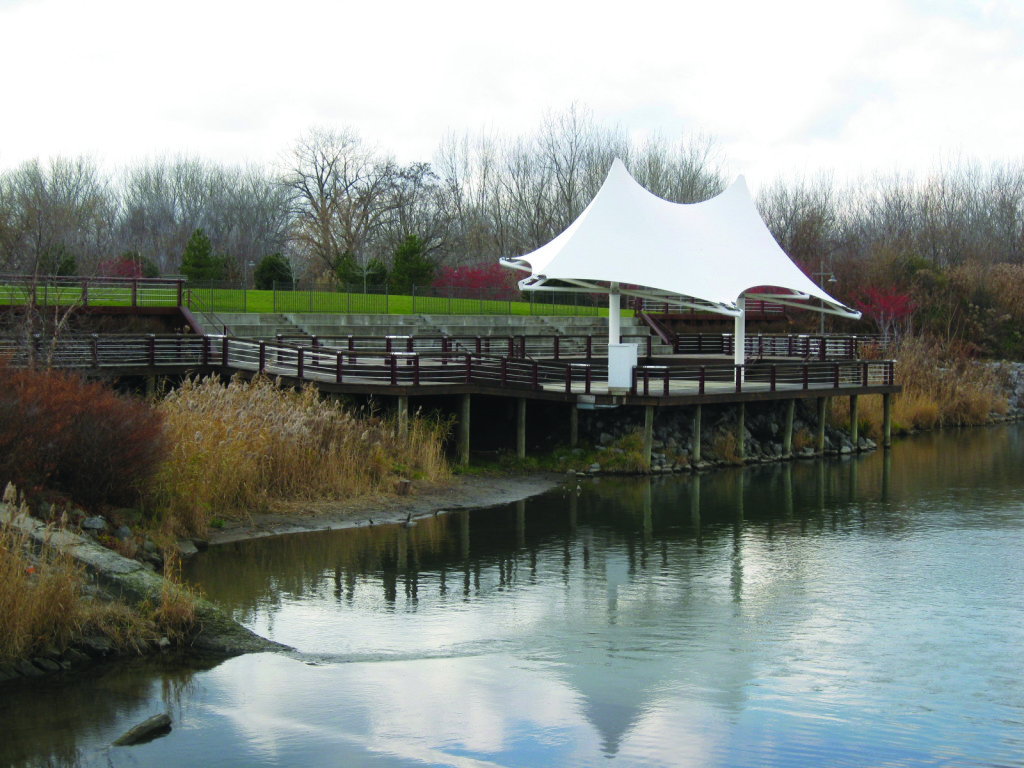 A recent discussion about a stadium in Kennedy Square raised another question of property-tax exemption, but the discussion wasn’t brought to the city. In fact, one of the players said, “We don’t need the city on this.” Is that odd?

Yes. And I don’t think that there was ever a fully developed plan. There was an idea, and there was some resources that people said they could put towards it. I hadn’t seen a map where the stadium would be. I hadn’t seen a map where parking would be, or who the developer was going to be, or who the operator or the occupants would be. It’s telling that there weren’t a lot of people involved in the process. We do development every day in this city, and we know that there’s a process. I live in a world where you have to do a study or a plan before you put a stop sign in a neighborhood. 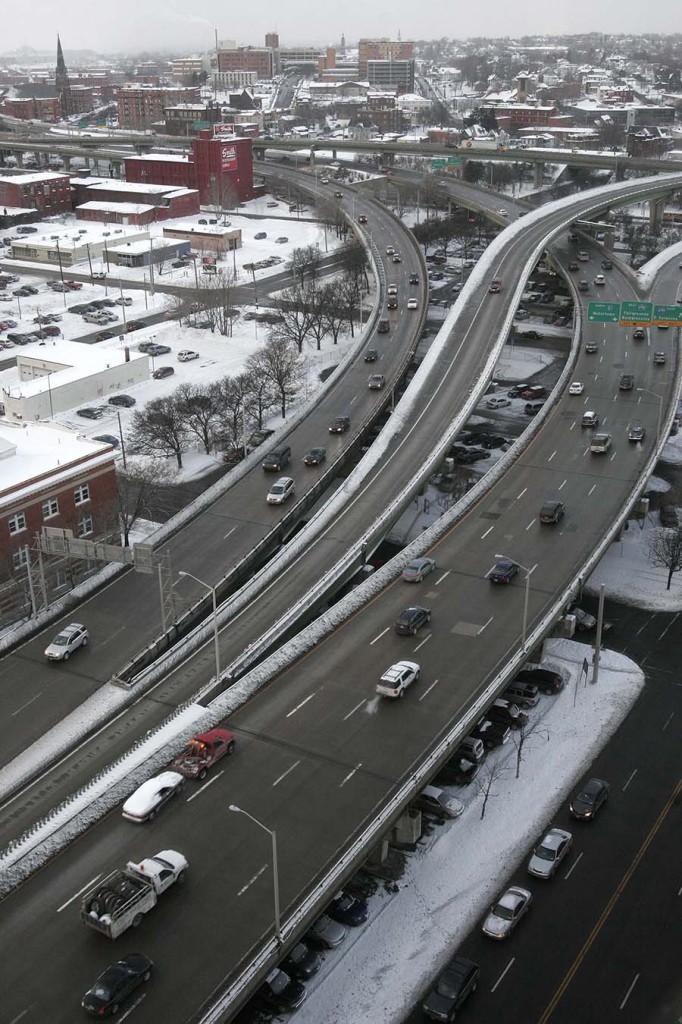 “We have a once-in-a-lifetime opportunity to do the right thing” – Stephanie Minor on what actions to take on Route 81.
Michael Davis Photo | Syracuse New Times

What is the process for Interstate 81?

I think the first question we have to ask ourselves as a community is, do we want to view Route 81 as just a road, or do we want to view it as an important asset to the people of this community, and that’s a very distinct question. I think we have to view it as the latter. And we have to view it as a way we make connections between neighborhoods and people, but we also have to understand that the way it currently stands has been a real disservice to the economic life of our community, the social life of our community, the cultural life of our community. We have a once-in-a-lifetime opportunity to do the right thing, to harness the benefits economically, socially and culturally, of designing a road to maximize those benefits. But if we don’t, if we’re just going to think about how to get as many cars from point A to point B as quickly as possible, we will have done in incredible disservice to the community.

As mayor of Detroit, Dave Bing experienced economic disaster. Should we bring him in to help us figure out how to avoid, as you have noted, the possibility that the city could be broke in three years?

We’ve done that already. We have looked at the mistakes that Detroit has made and been very conscious about not making those mistakes. One example is there was an opportunity to borrow (related to pensions), and I refused to do that. Of the many mistakes Detroit made, one of the biggest was that they started borrowing for operating costs. That just made the hole bigger and bigger. I’ve committed to the people of this city and the community at large that we’re not going to be financially irresponsible, and we’re going to be very up front about what our challenges are, that we’re going to meet them in a way that we’re not just thinking about the next four years, but the next 10 years.

Will some of the means for meeting those challenges be very hard for people of the city to accept?

Absolutely. We had to close the Ida Benderson Senior Center, very difficult. We had to close a fire station, very difficult. We have really shrunken our employee base as a city. That’s been very difficult. So the answer is yes. But at the same time, we have made tremendous progress. Again, see the development going on downtown. We have neighborhoods flourishing. We have Say Yes to Education. We have a land bank, one of the first in New York state that’s being seen as a model. We’re moving forward with looking at public safety, both in an enforcement and a prevention mechanism. 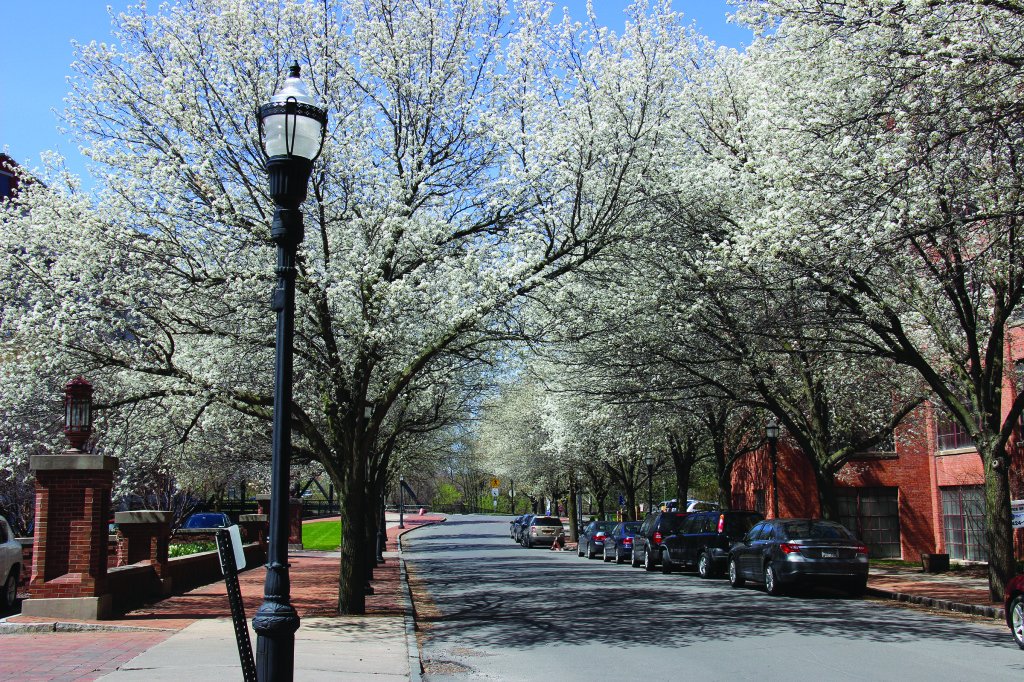 Is the public safety issue a product of the economic situation?

Of course, that’s part of it. And it’s a product of a lot of society’s values. When you see the stories of the homicides, of both the victims and the aggressors, the criminals, it doesn’t take long to see all kinds of breakdowns and dysfunction along the way.

Looking at figures in budgets, numbers jump out for pensions and benefits. Are those increases a source of our financial crunch?

No, when you look at the numbers, what you’re recognizing is that the economic model is broken. The economic model is broken when we are paying more in benefits for retirees than for active employees. … So I believe that our workers, both currently and past workers, deserve health care and deserve pensions. I believe that very deeply. I was a labor lawyer before I became mayor. But I also believe that we as a city have to be able to provide services. And we are getting close to the point where we’re going to have to decide, well, what do we do? Do we provide a service or do we pay our pension bills? If it were unique to Syracuse, then you could say it was Syracuse’s responsibility to solve the problem. But it’s not. What’s unique to Syracuse is that with our culture and our leadership here,  we’re going to be very open and honest about the problems. We’re not going to sugar coat them or lie about them. 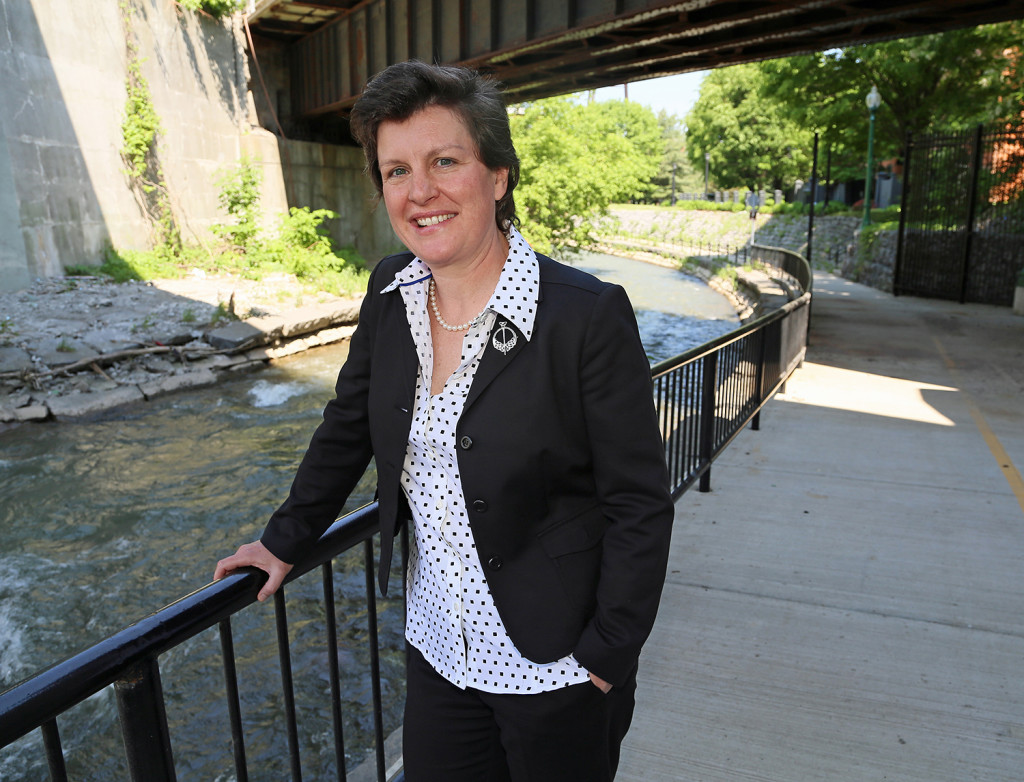 Will making that decision impact our ability to attract excellent employees? 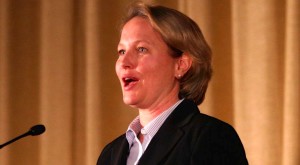 Another is the trend toward collaboration with county government. After a first term of smooth relations with County Executive Joanie Mahoney, is the relationship becoming strained?

A relationship that hasn’t been so smooth is with the governor. Two professionals, certainly, but a lot of conflict?

In cruder terms, does that piss the governor off and therefore put us at risk?

No. I think you’ve seen the governor act in a way that he understands that the people of the city of Syracuse are New Yorkers, and he wants to see all New Yorkers flourish, whether it’s from the record money we’ve seen in the economic development council awards we’ve gotten, or coming out for the Inner Harbor groundbreaking. He seems to be very supportive of initiatives in Syracuse. 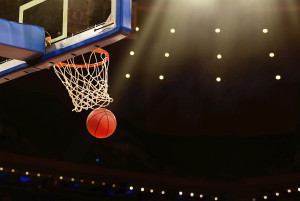 When your predecessor, Matt Driscoll, began his first term, he said he wanted to bring an NCAA basketball Final Four. They studied it and found there weren’t enough hotel rooms. Can we build enough hotels for that?

You hear a lot of people talk about Final Fours when they talk about subsidizing hotels. But again, a public subsidy requires a lot more thoughtful analysis than just simply saying if we give millions of dollars we can get one event every five years.

What do you see as the long-range future of the Destiny development?

I think you have to ask the Destiny developers that, not me. Our future as a city is much more diverse and intricate than simply a mall. And that’s another huge change in the outlook for this community. Part of the reason that the developer was able to get the unprecedented rich level of benefits was he said to people, ‘I’m going to bring you all of these things, and there’s nothing else going on in this community.’ I think you’re seeing now that he didn’t bring us all of those things, and there’s a lot going on in this community.

If Rights are Sacrificed, Security Isn’t Worth the Cost
Extend Moratorium on Fracking
To Top