These efforts in Syracuse reflect a national interest in solar energy.

More than 80 people filled the foldout chairs in Natur-Tyme’s Community Room on a Saturday in September for Solarize Syracuse’s standing-room-only Last Chance Workshop. The 90-minute meeting wrapped up the campaign’s nine-presentation run, which taught attendees about renewable energy’s benefits, the process of installing panels and the environmental and economic impacts of going solar.

Unpaid volunteers fuel the campaign, which works to help individuals interested in installing solar panels on their homes with perks like free site assessments and bulk discount prices. Jessica Azulay, program director for Alliance for a Green Economy, decided to start a Solarize campaign in Syracuse after attending a Solarize Madison meeting. She stresses the campaign’s community effort and its importance at a time when environmental concerns seem so big and so daunting.

“It often feels like as individuals, we don’t really have the power to change the system or to make a difference. By doing something in community, our personal impact is much greater,” Azulay says.

These efforts in Syracuse reflect a national interest in solar energy. According to Solar Energy Industries Association, a national trade organization, 53 percent of new electric generating capacity in the United States came from solar during the first half of 2014.

Since the first quarter of the year, New York rose one spot, to eighth from ninth, on a list of the states with the most competitive solar power.

“This program shows a lot of pent-up demand for solar in our area,” Azulay says. “The people here haven’t had the path lit for them before, and we’re doing that.”

The community-centric efforts of Solarize also are reflected in the campaign’s infrastructure. All campaign volunteers are considered members of the Solarize Syracuse steering committee. Mary Menapace, a member of Concerned Health Professionals of New York, became a member of the committee in June because she wanted the campaign’s efforts to extend to her home in Skaneateles. Menapace worked with the Skaneateles Town Board to prohibit fracking-related operations in the area.

“I got sick of going around the county and slamming my hand on the table saying, ‘No fracking, no drilling!’” Menapace says. “This is the ‘yes’ side of that. Renewable energy is the antidote.”

Back at Natur-Tyme, the audience at the Last Chance Workshop included mostly middle-aged people with a few younger couples sprinkled throughout. Many posed questions about wind’s effect on the panels (only about four or five inches sit between the roof and the panels, and presenters emphasized that gap afforded too little space for the wind to lift them off) and whether the panels violate roof warranties (presenters advised attendees to check with their providers to make sure). 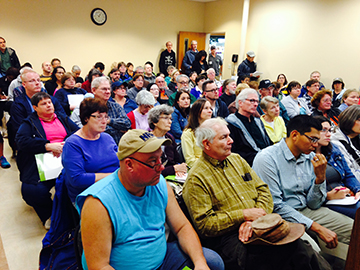 Christina Klaus, 50, of Syracuse jotted down information about payback time (estimated to be around 10 years) and the contract-signing deadline (Oct. 15). She considers the economic benefits of going solar just as important as the environmental benefits — “Oh, you’re gonna make me sound bad!” she joked — but doesn’t want the panels covering her brand-new roof. If one looks solely at economic benefits, solar panels provide a great option for young couples who can generate energy from the panels for decades to come.

Upfront costs and the complexity behind selecting the right installer often keep people from going solar. Pete Wirth, a member of the steering committee who held an open house for those considering signing a contract through Solarize Syracuse, researched solar companies for close to six months before signing a contract with CNY Solar two years ago.

Solarize Syracuse tackles these initial barriers for you: The campaign has combined its purchasing power to provide a bulk discount to everyone who signs a contract with its installer, CNY Solar. The committee members hired the installer based on its equipment, price and reputation after reviewing five companies’ proposals, says Chris Carrick, the energy program manager of the Central New York Regional Planning and Development Board.

Wirth is determined to support and stay informed on scientific advancements on all fronts. His wife needed a stem cell transplant about two years ago, and Wirth credits her health today to medical developments that made the transplant possible. Along with the developments regarding his wife’s health challenge, he counts solar power a great scientific advancement. Although it’s difficult to put a definitive price tag on solar power and its subsequent monthly costs, Wirth’s electric bills often reflect the minimum monthly payment of $17.35.

“I don’t mind paying a minimum payment because we need to continually maintain and upgrade the electrical grid. As a consumer of electricity, I feel that that’s my responsibility,” Wirth says.

Any surplus energy that the panels generate goes into an energy credits bank, which you can use during winter, when the sun is scarcer.

As of Monday, 504 properties were enrolled for a free site assessment, and 29 people had signed contracts with CNY Solar.

“Solarize projects are designed to permanently have an impact on the market,” Azulay says. “The response we’ve gotten to this program shows that there’s really a hunger here to make this shift to renewable energy.”

What You Need To Know

Interview: Peter Waite and Marsha Tait
Of Puppies and Lattes and Bombs Away: Asking All The Wrong Questions
To Top