Last Thursday, social media enthusiasts and professionals got to get up early to attend perhaps my favorite monthly event around town (don’t judge) – the Social Media Breakfast Syracuse (SMB).

Founded in 2006 by a Newhouse alum, the SMB now has over 50 chapters across the US and features experts talking about social media topics to a crowd of early risers (or “I’m really not an early riser” risers) drinking coffee and eating bagels, while Tweeting the event line by line (#SMBSyr).

I always learn a great deal, meet cool people, and successfully network, having attended all but two of the SMB’s dozen or so events.

A Panel of Experts 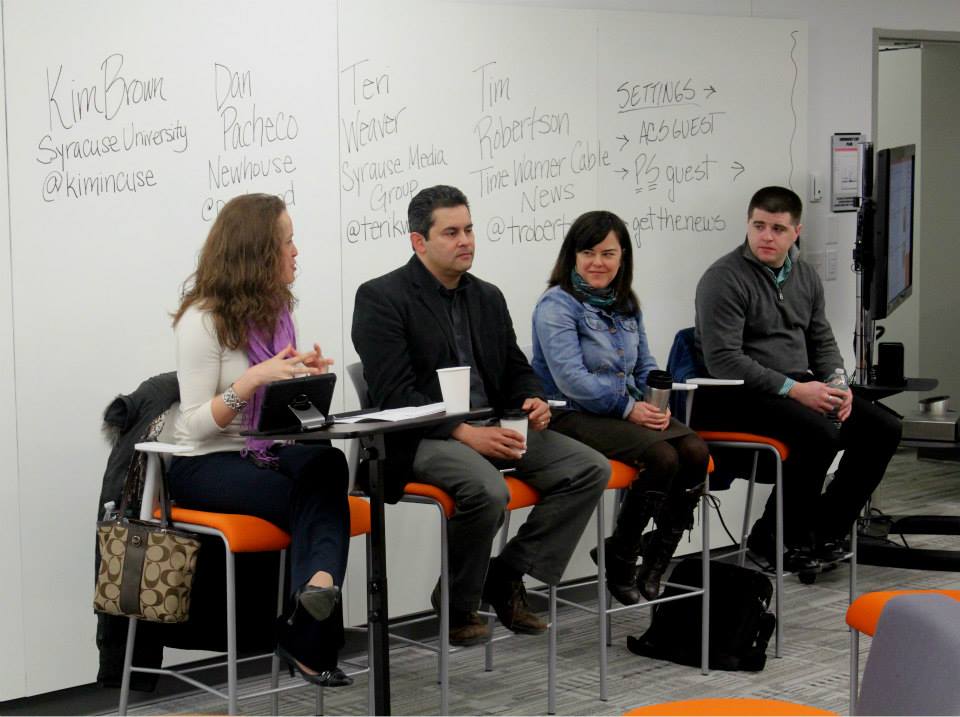 Last week’s program, co-presented with the Syracuse Press Club and hosted by Syracuse Media Group consisted of a panel of local journalism experts talking about the recent evolution of the business in the internet world and the impact social media is having upon the industry.  Speaking were Dan Pacheco, professor and Horvitz Endowed Chair in Journalism Innovation at Newhouse; Tim Robertson, digital content producer for Time Warner Cable News; and Teri Weaver, government reporter for Syracuse.com; with Kim Brown, Newhouse professor and former News Channel 9 reporter serving as moderator.

The discussion circled around the shift from print to web, and underlined some key effects social networks are having on the news media. 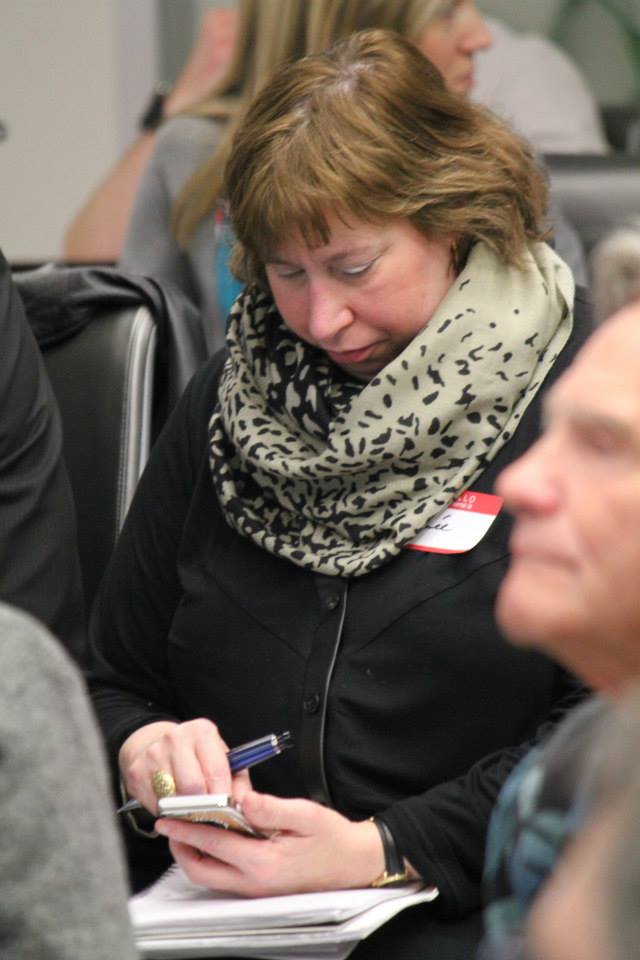 First off are the abrupt cuts in old news room jobs, and the increase in staffers of digital news organizations.  Print media – newspapers and magazines – that didn’t migrate to the web in some way, have already signed their own death warrants.  New, trendy news sources, such as BuzzFeed or the Huffington Post, are picking up in influence, being socially “hip,” interesting to web users, and easily sharable.

According to Journalism.org, though most Facebook users don’t go there to find the news, most of them find it there anyway.  I think most people have experienced first learning about a breaking news story while checking their newsfeed or Twitter.

“Facebook is a closed network, Twitter is an open network,” noted Robertson on how people follow the news and personalities.  Dan Pacheco compared the news industry to Hollywood.

“In the golden age of movies, the studio controlled everything, hired all of the actors in a company-town model,” said Pacheco, “Now everyone is a free agent.”

While the sources themselves remain a big deal (Time, WSJ, The New York Times), “the journalist is increasingly the brand,” noted Pacheco.  Just look at the incredible following new personalities now have on Twitter, due to its uniquely popular open forum.

“Now if I’m commenting on a story already leaked, I’ll tweet about it right away,” said Teri Weaver, “But if I’ve got something exclusive, I’ll hold onto it for my article.”

A Change in News

The event organizer, Kevin Morrow, a communications professional at SU, asked about the shift to the “sensational” stories to appease the online crowd and sell advertising.

“This is good for revenue, but not necessarily for society,” said Pacheco.  There is also the trend to news “bloggification.”

“There is still the long form,” said Weaver, “But now I mostly post story developments as I go, throughout the day.”

“Everybody is part of the media now,” said Pacheco, “And I think it’s a good thing. There are more cell phones activated than there are people alive in the world now.”  With that technology, and the growth of new social cameras such as Google Glass (Pacheco brought one in to “show the class”), the world is “one big camera” – photos are everywhere, which is changing the way news spreads. 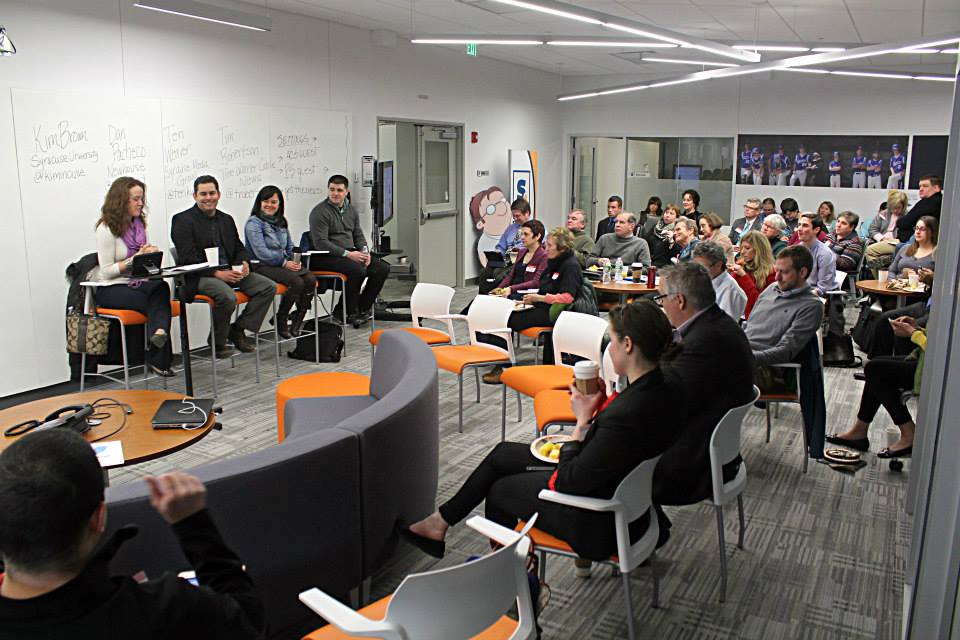 I caught up with a few friends afterwards, grabbed another coffee, and spoke to my friend Kevin Morrow after “the show.”

“We are in a remarkable time,” he said, “Not only have changes occurred in how news is presented and received, but now people are able to interact with news organizations and even contribute to the news gathering process. And while a role remains for newspapers and magazines and nightly newscasts, new technologies have opened up opportunities for digital outlets like Huffington Post, BuzzFeed and Mashable; prompted cellphone photos and videos of breaking news; and enabled widespread social sharing of news stories.”

The SMBSyr meets monthly on diverse social topics and in different locations, but is always a joy to attend (except for the early part – but hey, it’s a breakfast and there’s free food).  Follow them on Facebook for information about their next event. 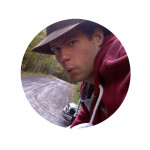 (re)Discover the Alternative
Not So Smart Clothing
To Top