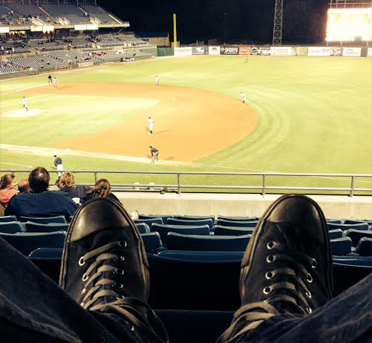 We’re talking about baseball, of course.

For all those reading this that may not be from Central New York, for the people who’ve never lived here for a year’s time, there are many things that are obvious when acknowledging the fact that we have four seasons to embrace and enjoy. Spring is often disregarded, often classified as “the big thaw.” We get antsy, and once late May hits, spring’s 15 minutes of fame for the year have clicked by and we’re looking for the bigger and better season, summer — a time where residents, after an insufferable winter, will bitch about the weather being too damn hot.

What gets me going is baseball season kicking off. This yearly checkpoint and sense of relief feels like a downhill coast while making an uphill ascent. It’s time to enjoy the nice weather even if it takes a few weeks to rev up and shift into first gear.

That song is a personal and consistent go-to, and quoting it just so will make it applicable for whatever you want to lick-it-and-stick-it to (i.e. Bat Mitzvah, first date, losing your virginity, wedding, graduation — and, depending where your preferences and what societal norms you follow, all this could happen in one night).

The fact of the matter is that this song is one hell of a tune, and it could set the tone for many good mixed CDs (if people still make those). “Mahgeetah,” the first track off of My Morning Jacket’s It Still Moves album, is another chill and singable start for an album. “Mahgeetah” has a similar smooth, relaxed tone as the disgustingly popular Little Big Town’s “Pontoon,” but the former is not overplayed on the radio, annoying, or as lyrically inept.

Frankly, I’d like to take the hand of the girl I’m with and twirl her to a stop, grabbing her other hand upon the move’s completion. She is dipped, and then we dance. Life’s too short to not create a harmless scene … especially when you’re having more fun than everyone else.

Alas, the digression may get the best of this piece. It’s best to nip this progression in the bud and go back to talking about rounding the bases.

We’re talking about baseball, of course.

A few years ago, a then-friend helped re-install my confidence that soccer, a.k.a. football/futbol, is one of my favorite sports to watch. Baseball, which is our nation’s designated sport, is right up there as well. Aside not playing it, golf is enjoyable to me as it creates wonderful background noise as well. If a sentence is written, one that is thoroughly enjoyed, it’s comforting to hear a roaring sound upon my typing’s completion. Hockey, the fast-paced “slow game” (due to low scoring) is also put down at times; although, I may not be the most dedicated hockey fan, any game is entertaining to watch.

So this guy enjoys boring sports. A couple of years ago I came out and admitted to enjoying boring sports. There was a chance for me to step to the podium and come to the defense of baseball, the Chiefs in particular, after one gentleman boasted how terrible the game itself and our city’s team are. The churning agitation allowed me to go home that night and type out a response. It was thought that the thrice-weekly newspaper would not have considered to put my rebuttal in print, but the editor must have found some joy in my words.

Yes, the ongoing debate of who-said-what about putting the you-know-what-where, still goes on to this day in regard to the placement of the once MacArthur Stadium. Now NBT Bank Stadium sits in the same spot as the formerly named stadium. Yes — and I agree — it probably would have been incredibly ideal to place the venue in Downtown Syracuse. But it did not happen   In other news, however, Syracuse University is still looking to make another footprint somewhere else in the city, instead of updating that existing one hell of an arena that they adopted as their own.

However, either venue is not collecting dust. 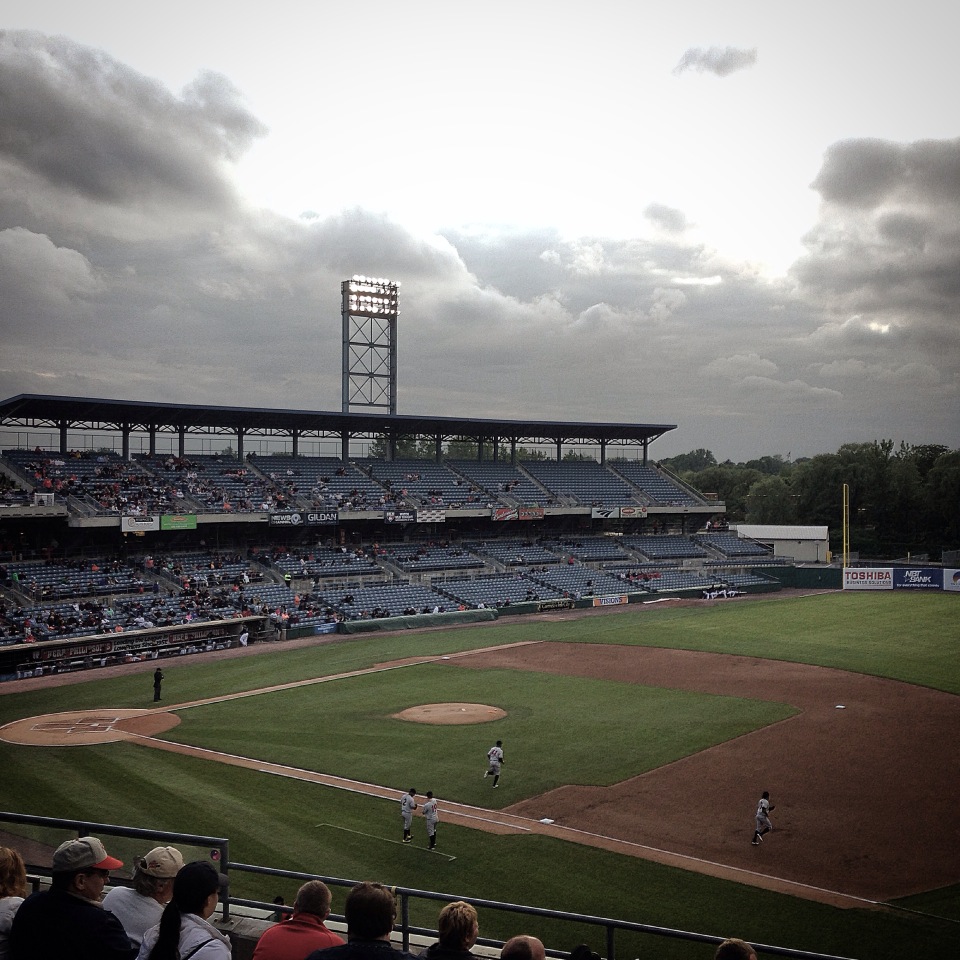 I’m guilty of making the mistake of not often attending Syracuse Chiefs games. They’re so fun. Attending a game is an inexpensive family-friendly treat that Central New Yorkers should be grateful to have. The last time I went to a game was last year’s opening day, but it was rained out. With food vouchers, we ordered a boatload of french fries and went to town on them. It got to the point where all of us began to feel ill, rethinking this decision, but it was all in good fun.

However, this past Thursday was a family-centered outing that took place. My parents, a cousin, and I headed to the ballpark for a good ol’ late spring game of baseball.  Since it was Thursday evening, the $1 Thursday promotion was in full force.  Each hot dog and cup-o-beer you purchase is $1. You can’t go wrong with that, right?

And, now, this is the place where the naysayers come in and put the kibosh on saying that $1 per beer does not make it a family outing. It does. As a part of society, we have to do our part to be responsible when it’s necessary.  We can still enjoy ourselves and fulfill our duties as upstanding  human beings. However, these quick-to-jump boo-yellers are not reminding you of what John Candy and Dan Akroyd told you about hot dogs.

Regardless where the white and red dogs come from, we all should know a heck of a deal when we hear one. 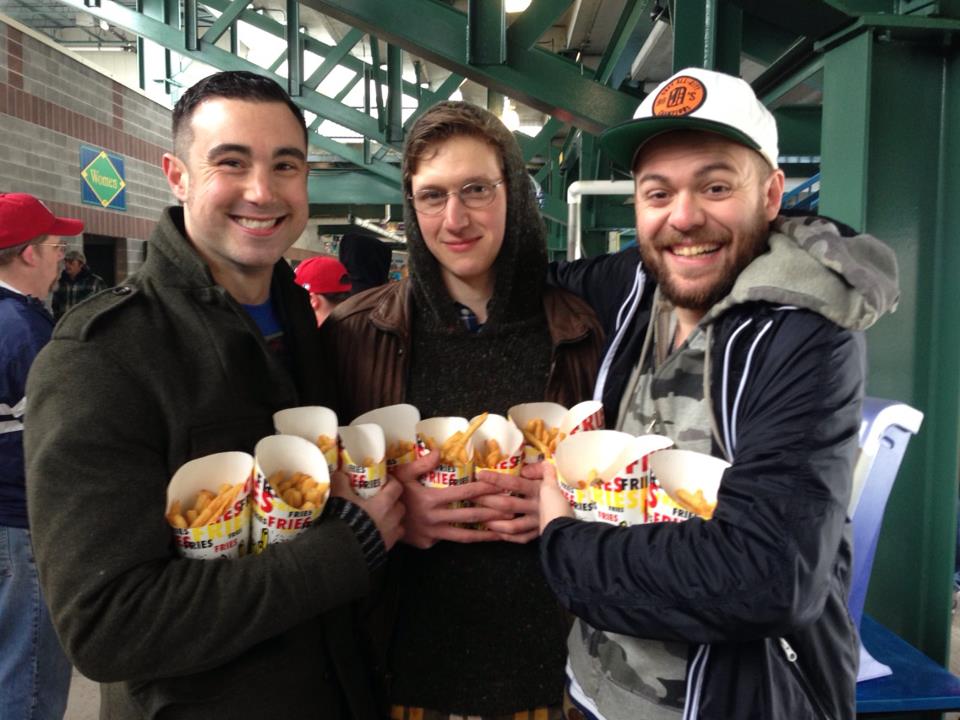 Considering the majors: New York is five hours give-or-take, and you can catch your Yankees or Mets. Pittsburgh, Philly, and Cleveland are still not far as well; however, visiting these games will make for long-but-worthwhile day trips. However, we still have our minor league teams close by as well. Auburn — their Doubledays — is not far away at all. Games are also all about being a part of it, win or lose.

It is being a part of it, the action. (Some people are shaking their fists and fingers as they ask, “What action?“) Hey, NASCAR is pretty damn boring, too — if you ask me — but it’s understood to be quite engaging in real life.

Baseball games are unattested relationship builders. Sometimes the company you are with — despite your being in a wide open area — feels like you’re trapped inside a locked room with them. However, on the common and positive side of things, people have the ability to kick back and relax, talk, and strengthen the bond between those in present company. Whether said company is comprised of family, friends, dates, or significant others — it’s living in the moment, hitting a pause button that no one else can tamper with. You may be simply having a beer and maybe doing business. You may be sharing time with your partner or spouse, cuddled up next to each other and covered in blankets(spring or fall seasons) as the game plays on.

And so does life. So you have better things to do — or no interest at all — to attend baseball-related anything. That’s fine. Everyone’s opinion and preferences are respected. Don’t shove your negativity at the fans when it doesn’t belong. Sure, there are other activities that can be enjoyed, and this stubbornness will leave you off of the email list for next time your friends do something without you.

You can take a gander at life as it passes by. While sitting on the dock of a Canadaigua Lake house this past weekend, no words — not even “surreal” — could describe the relaxation of body and mind shutting down for just a few minutes as lungs expanded with fresh air. Of course, all this was in between returning to the house and chowing down on some hot dogs, various dips and salsas, and other shareables.

Dock sitting was mystical, however …

Regardless of whichever and whatever you’re enjoying, all of us will see you at the game sooner than later.

Pine Bush – New York’s UFO Capital, or Not
Time for Men to Attend to their Health
To Top