Orange hoops team may live or die on its sophomores

It’s hard to believe now, but there was a time when freshmen weren’t allowed to play college basketball. And for many years after the NCAA made freshmen eligible in 1972, most freshmen were either redshirted or spent their rookie years on the bench, learning from the more experienced players.

Thus, the old adage that a player made his biggest jump from his freshman to his sophomore season. Kind of seems quaint now, with schools such as Kentucky annually loading up with “one-and-done” freshmen who bolt for the NBA after their first college season.

But for many college players, the old theory still applies. In recent Syracuse University hoops history, think Fab Melo and Michael Carter-Williams, who for different reasons had pedestrian freshman seasons before parlaying big sophomore years into first-round NBA selections. (By the way, when did MC-W turn into Oscar Robertson? Check out what he’s been doing for the Philadelphia 76ers).

This year’s edition of the Orange has four sophomores: guards Trevor Cooney and Michael Gbinije, forward Jerami Grant and forward/center DaJuan Coleman. For SU to come close to last year’s 30-win, Final Four season, the four sophomores will have to make noticeable improvements from their freshmen campaigns.

“We’ve been in big games and big situations, and that experience helps you from your freshman year to your sophomore year,” Cooney said. “That’s why everyone has that jump: the experience part. Those big games last year and making some big plays and just learning from those big plays is going to help us this year.”

The circumstances are different for each sophomore: Cooney is a redshirt sophomore who sat out his freshman year; Gbinije sat out last season after transferring from Duke; Grant had to wait his turn last season, much like Carter-Williams the year before; and Coleman missed eight games because of a knee injury last year and didn’t play in 17 of SU’s final 20 games.

But let’s take a look at them in pairs, with Cooney and Gbinije in the frontcourt and Grant and Coleman in the backcourt: 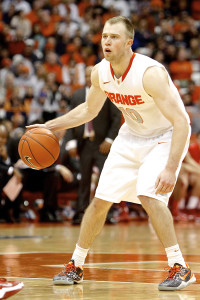 Last season, Cooney, 6-foot-4, averaged 3.4 points in 11.2 minutes per game and shot just 32 percent overall and 27 percent from 3-point range (28-for-105). He had his moments (10 points on 4-of-6 shooting against Georgetown in the Big East Tournament), but fell short of his reputation as a 3-point specialist.

“My redshirt year, I was able to work my body and get it ready for playing college and I was able to have some good practices playing against really great players in Scoop Jardine and Dion Waiters and Triche and Mike {Carter-Williams},” Cooney said. “I was able to learn from that.”

“My freshman year was also good for me,” he continued. “I learned so much more because I struggled and I was able to learn from my mistakes, and those help you even more than being successful. I think that’s going to help me this year.”

Cooney got off to a scorching start in SU’s opener against Cornell Nov. 8 at the Carrier Dome. He shot 10-for-12, including 7-for-8 from beyond the arc, and finished with a career-high 27 points as the Orange rallied from a 14-point first half deficit to defeat the Big Red 82-60. Coach Jim Boeheim said Cooney “bailed us out.”

“Knowing that you don’t have to look over your shoulder is big, knowing that your responsibility is a little bigger,” Cooney said. “All you can do is just step up to the plate.”

In his Orange debut, Gbinije scored six points with five assists and two steals in 20 minutes against Cornell. Gbinije transferred to SU from Duke, where he played 19 games as a freshman during the 2011-2012 season. 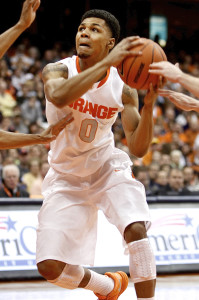 Gbinije, 6-foot-7, is most comfortable at shooting guard or small forward, but he’s going to back up Ennis and Cooney this season. With freshman Ron Patterson as the only other scholarship guard on the roster, Gbinije is a key player, as he’ll have to give Cooney and Ennis a breather or play significant minutes if either gets in foul trouble.

“It is going to take him a while. He didn’t play as a freshman and didn’t play last year,” Boeheim said of Gbinije after the Cornell game. “I thought he was steady out there. I was really happy with what he did.” 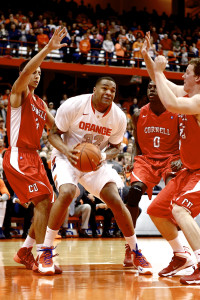 Grant and Coleman: Grant, 6-foot-8, played in all 40 of SU’s games last year, averaging 3.9 points and 3.0 rebounds and displaying the all-around skills that make NBA scouts drool. In the offseason, many college basketball experts called Grant and SU senior forward C.J. Fair the best pair of forwards in the country.

That’s quite a leap from 3.9 points per game, but Grant is poised to follow Jardine, Kris Joseph, Fair, Waiters and Southerland as the next great Orange player coming off the bench (Coleman, Fair and Rakeem Christmas start in the frontcourt).

“You always need that spark off the bench, and Jerami does a good job of doing that and getting us going,” Fair said after Grant had to sit out the Cornell game and the Orange sputtered offensively for most of the first half.

After the Cornell game, Boeheim said only that Grant “will be back” for the team’s next game against Fordham on Nov. 12 at the Dome. Syracuse.com reported that the NCAA had penalized Grant for a violation of summer-league rules; players are prohibited from playing in more than one summer league.

Having a player like Grant come off the bench has been one of SU’s strengths in recent years, so it’s important for him to continue his development in that role.

“I have seen him improve very much in his game. I think he has a lot of things he can still do to improve even more, and he will,” Boeheim said. “At the same time, he’s really a tremendous player. He had an excellent season for us last year; he seemed to shine most in big games, which is incredibly valuable for us.”

Coleman, meanwhile, doesn’t have to carry the Orange, as he’s part of a big-man rotation with Christmas and senior Baye Moussa Keita. Still, the Orange could use some more scoring from the low post, and Coleman has the most scoring potential of the three.

After scoring 11 points and grabbing 10 rebounds against Ryerson in SU’s second and final exhibition game, Coleman–6-foot-9 and 280 pounds–managed just two points and four rebounds against a Cornell starting frontline that went 6-3, 6-6 and 6-9, 230.

“He was able to just pretty much make layups in high school {at Jamesville-DeWitt} because of the size differential. Now, there are bigger guys, so he’s learning how to get in position and make that move,” Boeheim said. “He’s making improvements. Big guys offensively sometimes take three years, sometimes the fourth year, before they really are offensively to where you’d like to see them.”

Coleman, a McDonald’s All-American at J-D, said he’s fully recovered from the knee injury and is “lighter and looser” this season. He’s aware of the jump Melo made from his freshman to sophomore year and said he expects to get better as the season goes on.

“In high school, I’d just get the ball and go,” he said. “Here, you have to make sure you’ve got the right post move, because college players are a lot smarter and they try to take the charges more. I just have to take my time.”

For SU’s four sophomores, time’s up. Their performances will go a long way toward determining how far the Orange go this season.

“I feel like DaJuan was hurt a little bit last year, but he still got really good minutes. And Jerami started a bunch of games last year, so he got a whole bunch of minutes,” Cooney said. “I think going far in the tournament helped us; we were able to play in those games and get good minutes. If you get that, once you get there again you’ve already been there and you excel the next time.”

The Other Guys
They’re Baaaaa-aack
To Top