If trimming government waste is the goal, why not start by abolishing the state Senate?

Ever notice that when politicians talk about streamlining government, they tend to give their own arses a pass?

At a meeting last week of Consensus, a group dedicated to a more efficient public sector in Onondaga County, presenters stressed that support for the project was coming from state Sens. John DeFrancisco and David Valesky, among others.

Just a thought: If trimming government waste is the goal, why not start by abolishing the state Senate? The savings in criminal prosecutions alone would be immense.

But let’s not go there. Personally, I’m in favor of big, wasteful government, especially locally. Government is the only growth industry we have in Central New York besides the hospitals and Syracuse University. It’s the one sector that delivers when a blood relative gets out of rehab and needs a job with full medical.

That’s why I am so excited about the government-expansion project I’m working on in my local community—Jamesville—with help from my new best friend in the whole world, Onondaga County Republican Party Chair Tom Dadey.

The other day I dropped by Dadey’s Jamesville insurance office, and in no time he was playing ball with my idea of Jamesville seceding from DeWitt and becoming an autonomous town divided into four semi-autonomous villages, each with its own fire, sewer and public works departments. Dadey even suggested stuffing the payroll with beach, prison and railroad commissioners who would get free use of town vehicles. In other places, Dadey noted with envy, “You’ve got part-time police chiefs making six figures to oversee five or six officers!”

Exactly! And now it’s our turn. Long marginalized as a postal code and a hamlet devoid of political juice, Jamesville is done cowering under the boot of DeWitt. For mayor, I’m backing a born leader whose reluctance to serve is matched only by his devotion to his customers. Yep, I’m talking about Robbie T of Robbie T’s Pizza.

“You know me, I love everybody,” Robbie said nervously when I approached him about becoming mayor. “Can you just leave me out of it?” He’ll come around. George Washington needed a nudge, too.

The Free Jamesville movement also welcomes Marv Bodley, president of the Jamesville Community Museum. “We don’t have any representation in Jamesville,” Bodley said with a radical glint in his eye. Something tells me his days of puttering around the museum are numbered. As executive director of the Jamesville/I-481 Toll Road Project, Bodley, if my plan goes forward, will rake in $185,000 a year plus a housing allowance.

For now we’re not forming our own school system. Especially in the critical area of not providing relevant information about its scandal-ridden basketball team, Jamesville-DeWitt continues to do an excellent job. 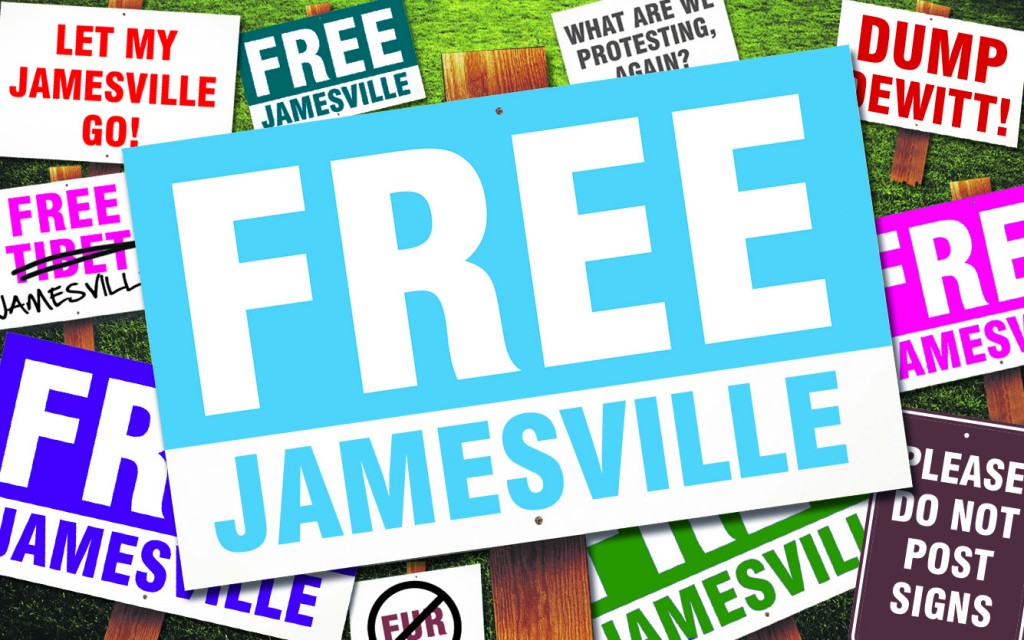 Meanwhile, other communities would do well to study the Free Jamesville movement. Although Onondaga County appears happily strangled in public sector redundancy, tragic exceptions persist. Tully, for example, has just one fire department. Disgraceful. Despite its size, Camillus has only one code enforcer. Solvay has its own electric utility, which begs the question: Why don’t all of our communities have one?

Central New York must do better—and it starts by not investing Consensus with mythical streamlining powers. Consider that maybe 75 people attended the March 11 Consensus presentation downtown. During the question-and-answer session, two audience members blathered on for about five to 10 minutes each. At one point, a third person became exasperated and spoke up to remind the second speaker that others in the crowd might wish to contribute.

Here’s my question: If Consensus can’t rein in a couple of windbags at a meeting, how’s it going to rein in a rat’s nest of local government 200 years in the making?

Another hopeful sign was in Consensus’ bureaucratic verbiage. A Consensus goal, stated in the slide show, is to “Build a continuum of potential options for enhancing the cost-effectiveness and competitiveness of service delivery and governance in the region.”

Based on language like that, maybe I’m being too hard on Consensus. Free Jamesville might have more in common with them than we realize.

News and Blues
Saints Be Praised
To Top