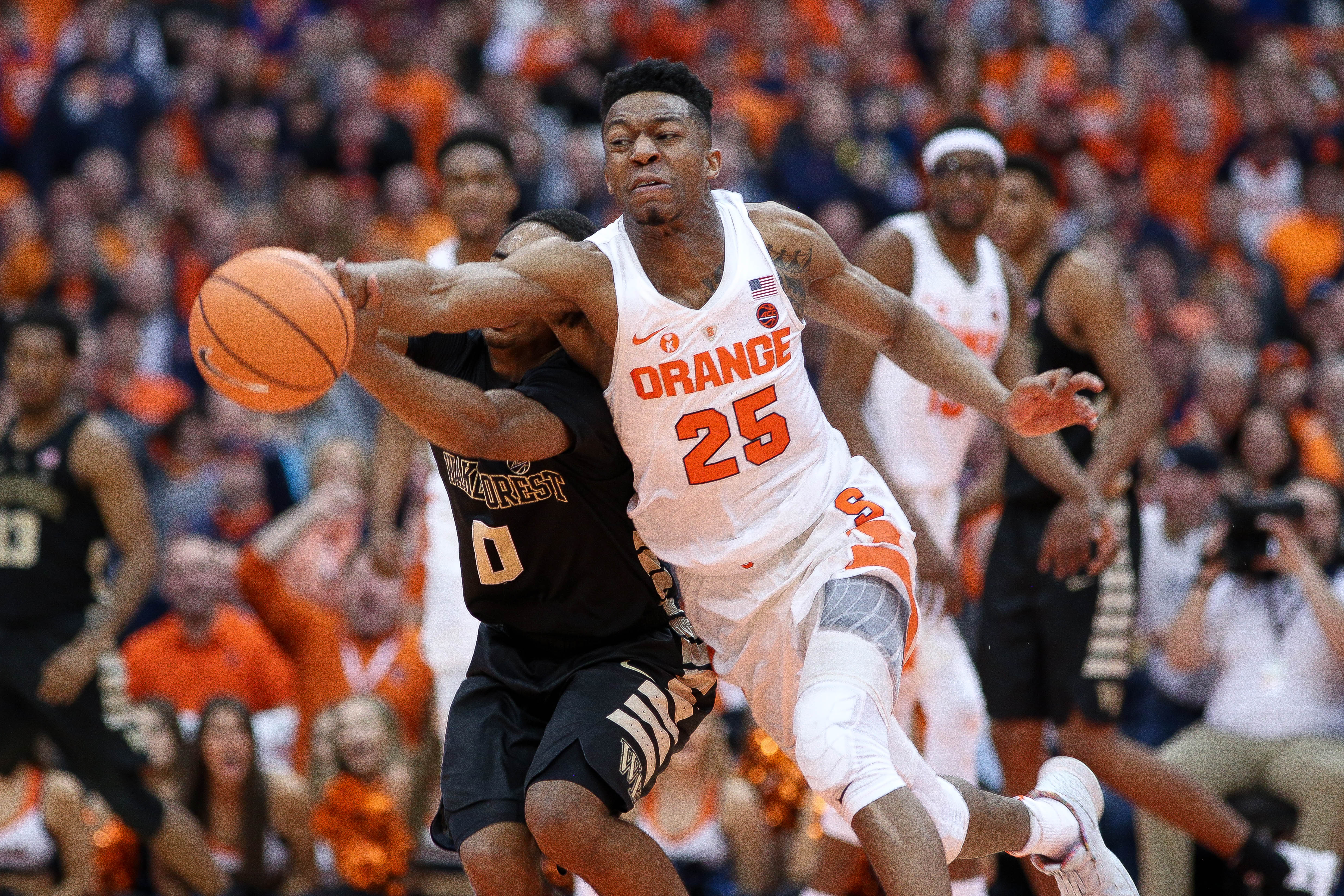 When Tyler Lydon left for the NBA last spring, and when Taurean Thompson unexpectedly bolted for Seton Hall in September, did you think the Syracuse University men’s basketball team had a shot at this year’s NCAA Tournament?

When fifth-year graduate transfer Geno Thorpe left the team in early December, and when injuries to Matthew Moyer (ankle), Bourama Sidibe (knee) and Howard Washington (season-ending knee) thinned out an already-thin roster, did you think the Orange had a shot at the NCAA Tournament?

How about when Syracuse scored only 49 points in an ugly loss to an injury-riddled Notre Dame team Jan. 6 at the Carrier Dome? Or when the Orange scored just 44 points — the lowest for SU in Dome history — in a defeat to then-No. 2 Virginia Feb. 3? Did you think the Orange had a shot then?

If you said yes, your faith and fandom may yet be rewarded.

We’re in mid-February with six regular-season games remaining and the Orange is in a position where it controls its own NCAA Tournament destiny. Entering the Wednesday, Feb. 14, 9 p.m. game against North Carolina State (16-9, 6-6 in the Atlantic Coast Conference) at the Dome, the Orange is 17-8 (6-6 in the ACC) and, for the time being, is right on the edge of the NCAA Tournament bubble. 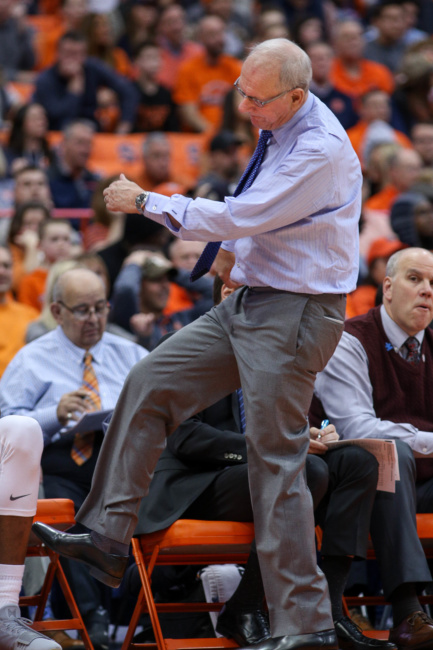 And like one of Tyus Battle’s ankle-breaking step-back jumpers, we’re going to take a big step back and say that, all things considered, it’s remarkable that the Orange is even in the NCAA Tournament conversation.

Indeed. After a glorious run to the Final Four in 2016, the Orange missed the tournament last year for just the ninth time in Coach Jim Boeheim’s 41 seasons. Syracuse played in the 2016 National Invitation Tournament and was bounced in the second round by Mississippi at the Dome.

With six of the top seven scorers gone from last year’s team (Lydon, Andrew White, John Gillon, Thompson, DaJuan Coleman and Tyler Roberson), it seemed impossible that the Orange would be better this season. But this year’s team does something that last year’s team did not: scrap and fight on every possession. And that has carried Syracuse to the brink of a NCAA tournament berth.

“I feel like there’s a lot of fight in our team, that’s the main thing,” said freshman sensation Oshae Brissett, who has been perhaps the biggest surprise of this season. “We never get too down on ourselves, we never think that we’re out. It doesn’t matter what game we’re in, we can win any game, and I feel like that’s the biggest thing that keeps everyone having a lot of hope in us because they see that we want to win, they see that we’re doing the things to win, although sometimes we come out on the short end of the stick.”

Perhaps the most important thing about this year’s team is that the players know who they are and what they have to do to win. In other words, they’re not looking for style points; they’re winning ugly with defense and hustle, and occasionally they’re losing even uglier when they don’t shoot well.

And in a weird way, the injuries and lack of depth may not be as bad as people think, even though Battle, Brissett and point guard Frank Howard are playing nearly 40 minutes every game.

“This team has done a really good job of bringing it every day, trying to carry out what coach (Boeheim) is doing and I think they’ve all understood how we need to win this year,” said associate head coach Adrian Autry. “And a lot of times, people look at the injuries and they do affect the depth, but when you have a lot of guys, sometimes that’s a lot of different personalities that you’re trying to mix.

“Sometimes when you have only eight or nine guys, you kind of get that camaraderie, you get that closeness and everybody feels like they’re competing and contributing,” Autry continued. “Sometimes that makes a difference with team chemistry. And this team has that.”

This year, the NCAA Tournament Selection Committee is dividing teams into quadrants based on their Rating Percentage Index (RPI) ranking, and they’re using a team’s record in each quadrant to supplement their selection process. After winning at Louisville Feb. 5, the Orange had two Quadrant 1 wins (Louisville and Buffalo) with a chance for several more as Syracuse plays Saturday, Feb. 17, at Miami (No. 25 in the RPI entering this week), Feb. 24 at Duke (No. 9), and March 3 at home against Clemson (No. 4).

In addition to Wednesday’s game against North Carolina State (No. 71 in the RPI), Syracuse also plays Feb. 28 at Boston College (No. 81). Syracuse, which was No. 38 in the RPI entering this week, has a great opportunity with its remaining schedule to boost its tournament resume before the ACC Tournament starts March 6.

“For the most part, we’re not out there when something goes wrong just hanging our heads,” Howard said. “We’re fighting every play. That’s the identity of this team and we want to keep pushing, finish well down the stretch and try to get every game we can.”