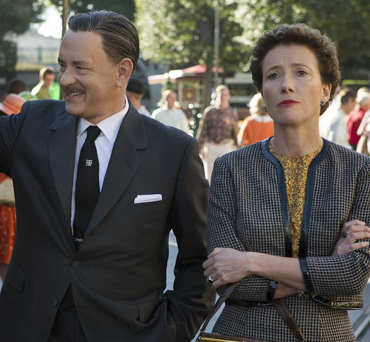 Walt Disney and P.L. Travers were dancing around a movie based on her books for 20 years before the waltz got to the point where the author reluctantly agreed to travel from London to Los Angeles.

That’s where “Saving Mr. Banks” pulls us into the tale of the American maker of on-screen magic and the woman who put so many children and adults under the spell of her words with her Mary Poppins character. Writers Kelly Marcel and Sue Smith and director John Lee Hancock capture the mood of optimistic LA in 1961 perfectly. Disney is accustomed to getting what he wants, and his folksy manner of running his studio has his workers hellbent on helping Walt get just that.

Mrs. Travers, however, wants all things Poppins her way. She’ll listen to the work put together by the scriptwriter and composer and lyricist, all right, but she won’t like any little deviation from the picture she’s built in her mind for so very many years. 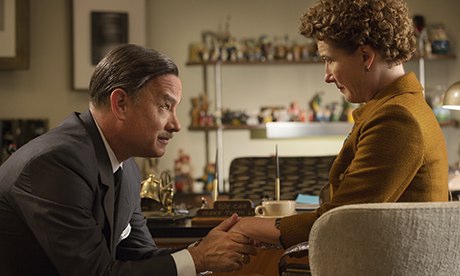 Tom Hanks and Emma Thompson are brilliant as the magnate and author, parrying and bobbing and weaving over every little thing. Travers is a pip, and Thompson does the crankiness, complaining and outright orneriness like a master. Disney bends and bends and bends some more because he promised his two daughters two decades earlier that he’d put their favorite character on the big screen. Hanks gives him life as a big player with plenty of patience, folksy wisdom and the tenacity needed to build a theme park, put the family name on it and then become a national brand by entertaining everybody on the big and little screens.

All the supporting players add to the drama and humor. Paul Giamatti is superb as the chauffeur who goes above and beyond his task of hauling Travers back and forth from the Beverly Hills Hotel and the movie lot. Bradley Whitford, B.J. Novak and Jason Schwartzman shine as the beleagured scriptwriter, lyricist and composer. Kathy Baker archly tries to steady all as Walt’s receptionist.

A big Sunday afternoon crowd at Destiny USA, comprised of plenty of people who remember “Mary Poppins” and “The Wonderful World of Disney” for real, obviously appreciated all that great work. But “Saving Mr. Banks” is so much more than that.

Another movie plays inside of Travers’ head, and it reveals the reasons she holds the story of the banker, his family and the nanny so very dear. The characters here are as vivid and well-rounded as the LA entourage. A star is being born in child actress Annie Rose Buckley, who plays loyal and smart daughter Ginty. Colin Farrell and Ruth Wilson are steadfastly opposite as her tense Australian parents, and Rachel Griffiths is as stern as needed to play the latecomer who tries to keep it all together. It’s up to wily old Walt to put one plus one together and make Travers’ life whole again.

It’s no spoiler to reveal that “Mary Poppins” indeed was released. The scenes of the night of the premiere include precious clips from the real thing, and the interplay between Hanks’ Disney and Thompson’s Travers as they watch what they have created is precious.