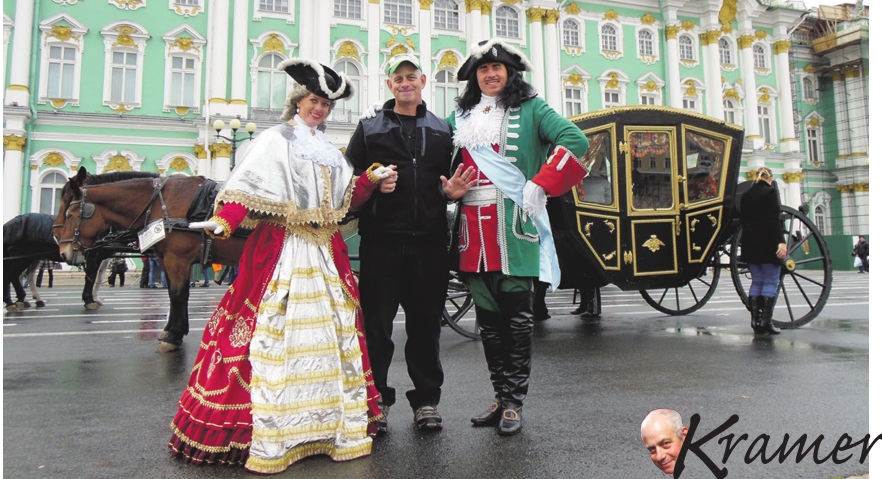 A spin of the wheel to find Edward Snowden

When an opportunity to travel to Russia with friends arose last year, I believed I was signing on for a typical vacation: a chance to escape the leaden skies and iron-handed administration of Stephanie Miner for the leaden skies and deepening dictatorship of Vladimir Putin. It sounded like a blast, not much different than a jaunt to Aruba or St. Martin, only with better museums, more potatoes and nuclear weapons.

But not long into the planning process, the real world began intruding on my dream holiday. Edward Snowden, the notorious CIA leaker, was granted safe haven in Moscow—a Putin thumb to the eye of President Barack Obama. By the time my plane left Hancock “International” Airport on Sept. 24, friends, colleagues and patriots were burdening me with a task I hadn’t bargained for: Find Snowden.

This was now a working vacation. My mood further darkened during a layover in Frankfurt, Germany, when I made the mistake of buying Masha Gessen’s impeccably researched and courageous book, Vladimir Putin: The Man Without A Face. By the time I landed in Russia, I was deep into her chilling portrayal of an accidental dictator who years earlier had stolen millions from my arrival city: St. Petersburg. And that’s one of the sunnier lines in Putin’s resume. Gessen establishes that Putin surely knew that apartment bombings in Moscow in 1999 were carried out by his KGB cronies for his political benefit, not by Chechen terrorists, which is still the official line.

In the years since, he has recreated an authoritarian society by which aggressive journalists, reform-minded business leaders and political activists end up in prison or worse, which I suppose explains why a number of people here, including my wife, had wondered why anyone would want to visit there. At customs, a uniformed crone studied my papers for an eternity and finally handed me back my stamped passport with a glare.

It was party time. * * * * * It didn’t take long for the biggest obstacle in my search for Snowden—the language barrier—to assert itself. Regrettably, most Russians ignore the Geneva Convention mandate that everyone else in the world learn English so Americans can travel abroad with ease.

“Have you seen Snowden?” I asked the cab driver en route to my hotel.

“No, no,” he replied. “Not until November.” The next day, my first full day in Russia, I wandered the canals and stately main drag, Nevsky Prospekt, with my friends from Southern California, CP and Sherry. While they happily absorbed the realization that we’d finally made it to the country of our Cold War nightmares, I was distracted by the hunt. Where was the pasty little Benedict Arnold? A whimsical food emporium whose interior was dominated by a massive floor-to-ceiling fake pineapple seemed an unlikely place for the former CIA mole to hide—so I checked it thoroughly. No Snowden.

I took a flier on the obscure Museum of Hygiene. It featured displays of painful, outdated dental procedures and the horrifying effects of STDs—all “bound to appeal to children’s curiosity,” according to the museum website. Also, there was a stuffed dog roped into a contraption to measure its saliva and urine output. Perhaps Snowden was being similarly held by the Russians. But where? No one in the museum pretended to have a clue.

During our tour of Catherine the Great’s Summer Palace, I tried a more presumptive line of questioning. “How often does Edward Snowden come here?” I asked our pixie guide Maria. She stopped dead in her tracks. Suddenly, the young woman who until that moment had given the air of having all the answers knew nothing.

“Who is this person?” she inquired. “I have heard that name before.”

Save it for the Senate Intelligence Committee, sweetheart.

My friends dragged me to a ballet, then to an obscure opera at the famed Mariinsky Theater. The opera was called For the Love of Three Oranges, and, no, it was not a tragedy about Syracuse University recruiting violations. It was about a hypochondriac prince who will die if he doesn’t laugh. I didn’t feel much like laughing myself. The trail had gone cold. What’s worse, I felt watched. When I accidentally left my room phone off the hook, I received a creepy text message from the front desk: “Put your phone back.” I also received a haunting message from my wife, Leigh, back home:

My state inspection sticker was past due. I realize that has nothing to do with Russia, but still. Is there refuge from the police state?

It seemed as if Putin and his network of spooks were laughing at me as I bumbled around looking for his prize American holding. To top it off, I was picking up intelligence chatter that Snowden might not even be in St. Petersburg. RT, the Russian English-language propaganda outlet, was reporting that Snowden had asked the European Union Parliament to afford better protection to whistleblowers. Snowden, the article stated, “now lives in Moscow.”

A subtle clue, for sure. But perhaps telling.

I doubled-checked the information with my best source in St. Petersburg, Peter the Great. Or, more accurately, the guy in a Peter the Great costume working the crowds outside the Hermitage State Museum. If you can’t trust a 6-foot- 8 reformer whose favorite hobbies are drinking, mocking the church and ordering mass executions, who can you trust?

“Where’s Snowden,” I asked Peter. “Moscow,” he replied with a hint of a smirk.

It was time to hop a bullet train south.

To be continued next week in the Syracuse New Times. Email Jeff Kramer … if you dare … at [email protected]