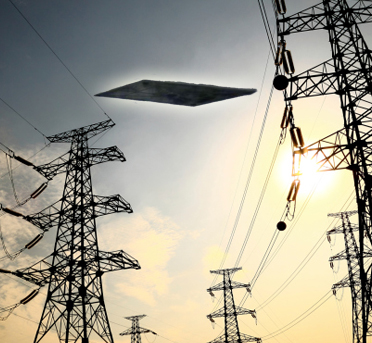 A father and son observe a rectangular-shaped UFO

A father and son never expected to see a rectangle UFO over the power lines.

In early November 2014 at about 9:30 p.m., Albert and his son Ronny were driving west just past the Oakdale Mall in Johnson City, N.Y. That’s when something unusual caught Albert’s attention.

“I noticed an object with red and white lights, a cube or rectangle shape, hovering near a ‘power line tower’. The lights were static and were not blinking,” he said.

Something just didn’t seem right so Albert slowed down his car to a crawl to get a good look and to make sense of what he had seen out of the corner of his eye.

Albert’s son Ronny was in the front seat and just as curious. He rolled down the window to get a better look. Meanwhile Albert safely pulled his car off onto the shoulder of the road. With the window down the only thing the father and son could hear was the occasional sound of a passing car but heard nothing from the direction of the rectangle-shaped object hovering near the power lines. Ronny was fascinated by whatever it was, exclaiming to his dad, “It’s about the size three cars!”

Ronny noted that it was starting to move in a northeast direction. This was in the opposite direction that car had been traveling so Albert turned it around. They began to follow the object up Oakdale road for about two miles but the rectangular-shaped object was pulling away at an increasing speed. After a few minutes, the father and son lost sight of the unusual aerial object.

“It certainly wasn’t any kind of conventional aircraft…that’s for sure,” Albert remarked.

Let’s look at some other sightings from around New York State:

14 Oct 2014: At about 8:30 p.m., a resident of Schenectady, N.Y. observed a flashing blue light traveling at a very high rate of speed. It appeared to be oval in shape. There were no others, and it traveled from the northwest to the southeast. He observed it for approximately 10 seconds before it was out of sight

17 Oct 2014: At about 9:45 p.m., a resident of Spencer, N.Y. witnessed four large orbs moving in a circular pattern then moving to the center and moving out again.

23 Oct 2014: At about midnight, several residents of Dix Hills, N.Y. observed a blue trailing fireball falling out of the sky at incredible speed.

24 Oct 2014: At about 7 p.m., a resident of Canton, N.Y. saw a number of bright lights blinking around a circle of bright light. The center was light red and flashing, and the object was moving at great speed.

24 Oct 2014: At about 7:30 p.m., a married couple in Wappinger’s Falls, N.Y. observed a bright white light, not blinking, moving across the sky; then it disappeared.

24 Oct 2014: At about 8 p.m., a couple of Gouverneur, N.Y. residents initially saw two strange lights. As they continued to observe, they say the two lights split up into four lights. Moments later they were gone, but about an hour later, the lights returned and this time there were ten lights in a circular pattern.

27 Oct 2014: At about 7:30 p.m., a Utica, N.Y. motorist observed a bright yellow light that appeared and disappeared dozens of times in the sky in different locations.

31 Oct 2014: At about 1:45 a.m., some residents of Lake Luzerne, N.Y. witnessed a display of three objects that were flashing in four different colors (red, green, blue and white) sometimes flickering, changing in shape and brightness. They noted the clouds were illuminated and objects were emitting bright streams of light.

If you have a UFO sighting to report, you can use either one of the two national database services: www.NUFORC.ORG or  www.MUFON.COM. Both services respect confidentiality.