The 61st season of harness racing at Vernon Downs began with a twinge of sadness on April 11, the night that announcer Jim Moran called his final race after 50 years behind the microphone. The broadcast booth atop the grandstand felt more like a phone booth: Aside from Moran, 10 other people, a mix of area media reporters and family members, jammed the teensy space to capture this moment in the track’s history.

Despite the press attention, Moran seemed unruffled about his impending retirement. He breezily noted some factoids to the scribes, such as the origin of Vernon Downs’ handle as “the miracle mile,” coined by a Utica reporter following a July 1955 race when Adios Harry clocked in at 1:55 minutes, a record that lasted for 18 years. 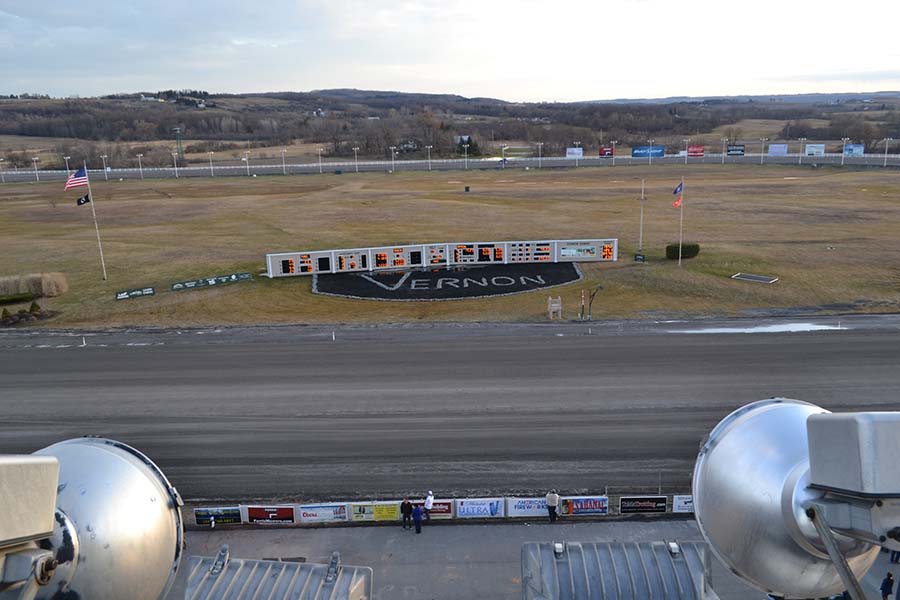 When the evening’s first race went off, however, Moran, headphones adorning his noggin, easily got down to business. “Heeere they come!” he excitedly began, as he peered through field glasses to witness the thundering herd. Throughout his commentary as the steeds jockeyed for position, Moran occasionally looked down at the evening’s program, which was decorated with scribbled notes regarding various statistics about the horses and their drivers. About two minutes later, the race reached its fast-paced conclusion (first-placer Paltrow Blue Chip crossed the finish line at 1:54.2 minutes), and so did Moran’s career of announcing more than 70,000 trots and paces. Veteran race caller Michael Chamberlain, who announces for Turf Paradise in Phoenix, Ariz., will take over the booth in mid-May.

Moran started at Vernon Downs in 1962, taking on tasks such as the clerk of course and assistant race secretary. Two years later he became the track’s announcer, the position previously held by his uncle, Bud Hebert. “My knees were really knocking,” Moran reflected on the first race he called, although those opening-night jitters quickly passed. The 1960s were a heady time for Vernon Downs, back when the results of every race were phoned in to local radio stations and many horses in the winner’s circle seemingly shared the Hanover surname. 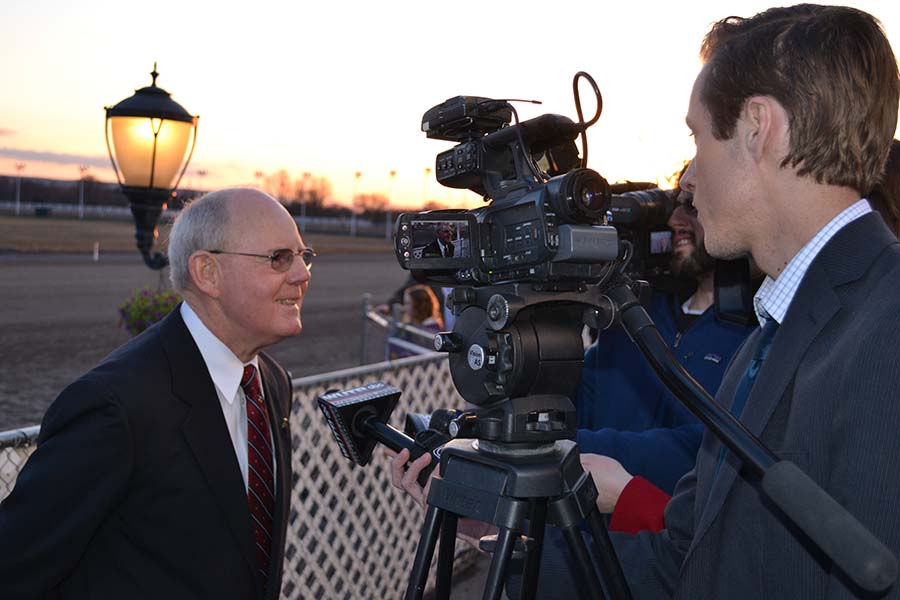 Following Paltrow Blue Chip’s victory, Moran left the nosebleed booth and ambled down the nearly 100-step stairwells as he ventured trackside to receive a slew of honors, including an honorary key to the village of Vernon, as an entourage of track officials and jockeys looked on. When musician Jeff Stockham, the evening’s bugler, trilled away to herald the horses for the next race, Moran swiftly moved into autograph mode, as he signed many ceremonial posters (the track handed out dozens of the document, which prominently featured several Moran photos) for everyone from kids to longtime railbirds. 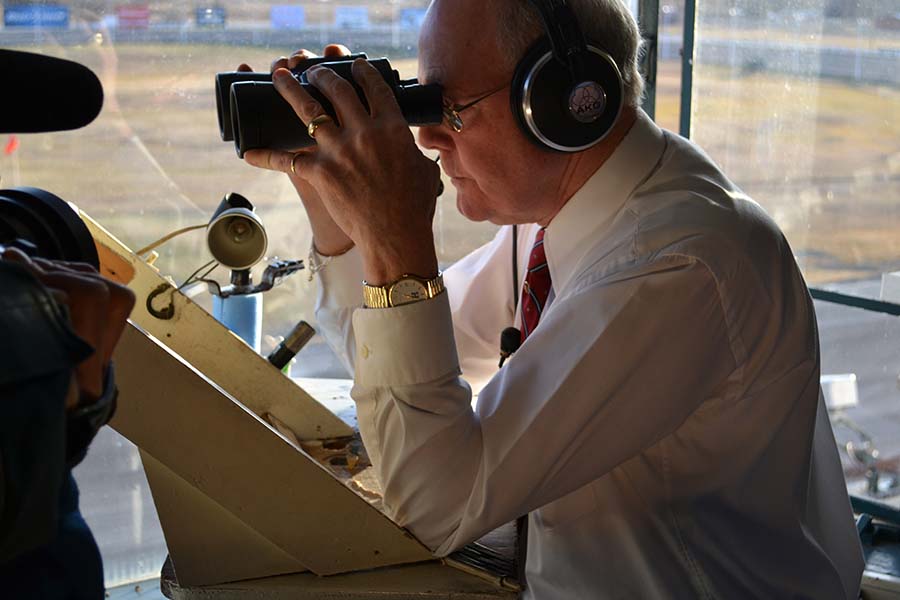 Moran’s retirement plans include spending more quality time with his wife Suzanne and his grandchildren, but his heart will always be near Vernon Downs — literally. His house is just a mile away, and he goes right past the track during his morning jog. Or in Jim Moran’s case, maybe it’s more like a canter.

Vernon Downs, 4229 Stuhlman Road, Vernon, continues to run weekends of harness racing cards through Nov. 1, with post times on Fridays and Saturdays at 6:45 p.m. Admission and parking are free. For more details, dial 829-6800. 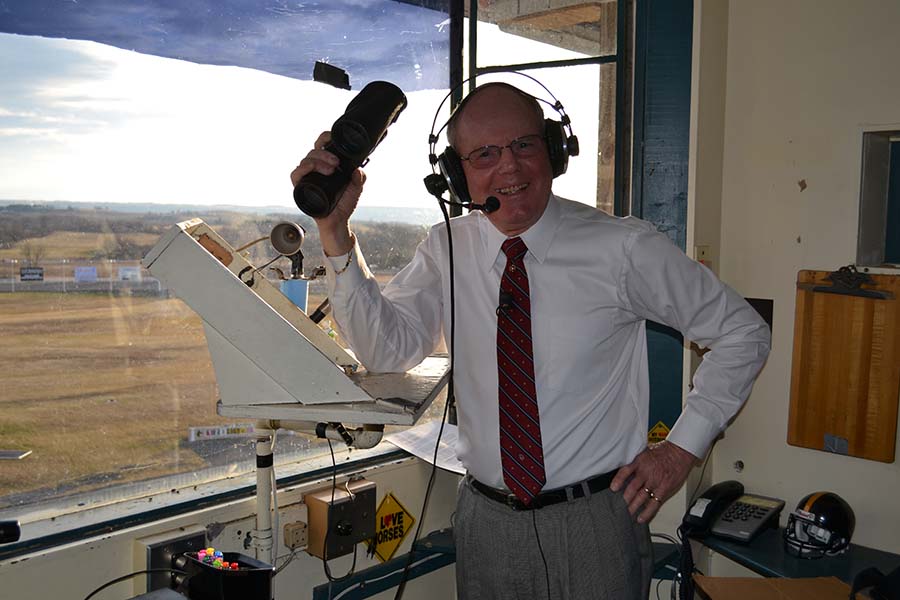 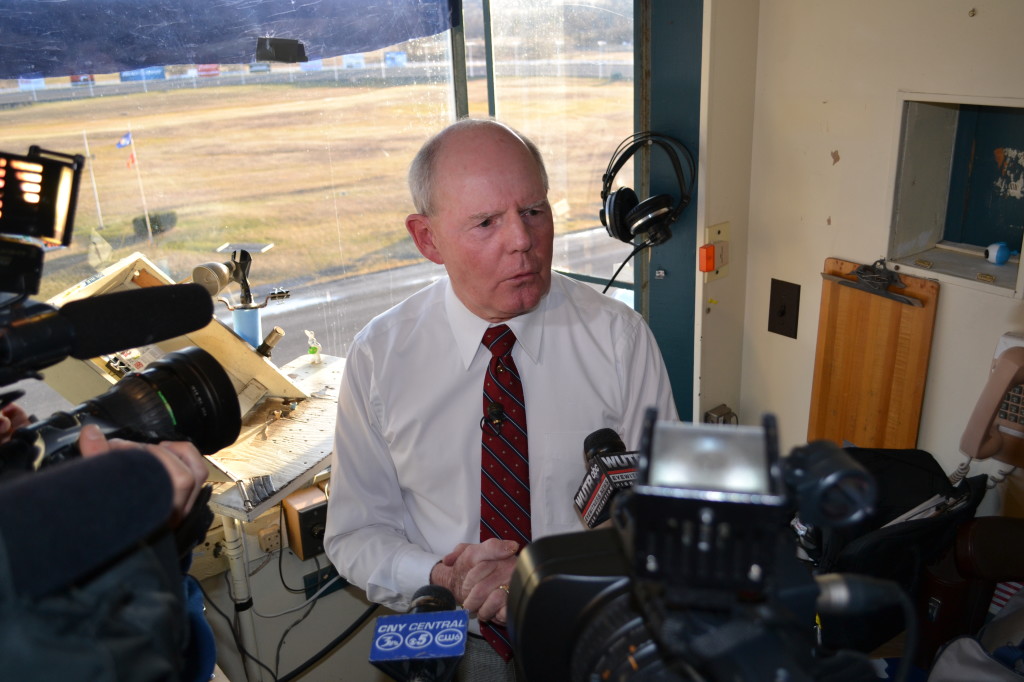 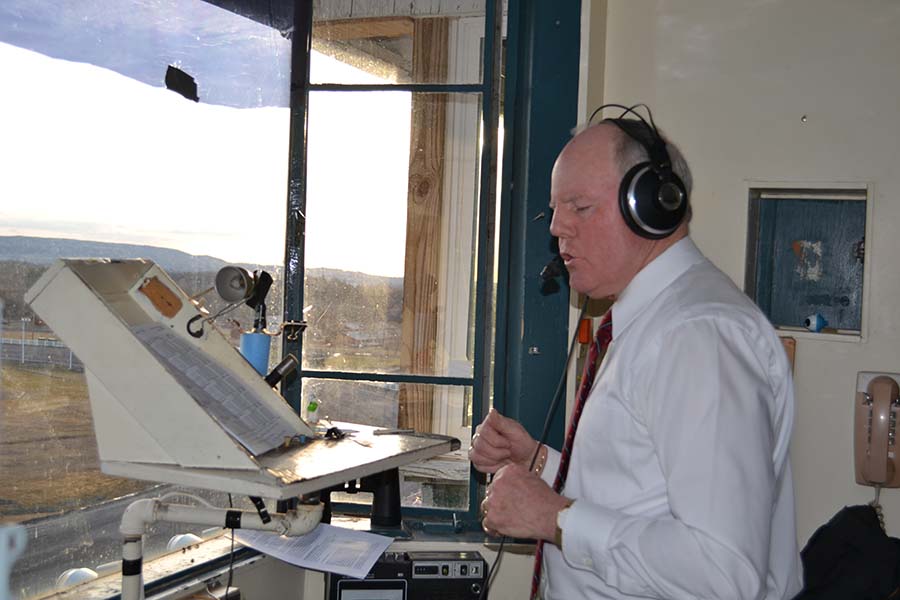 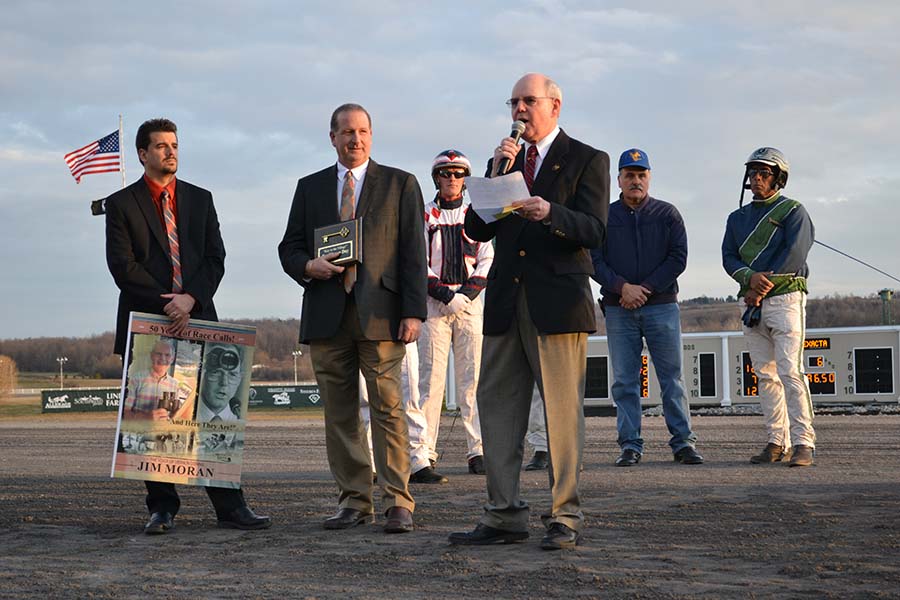 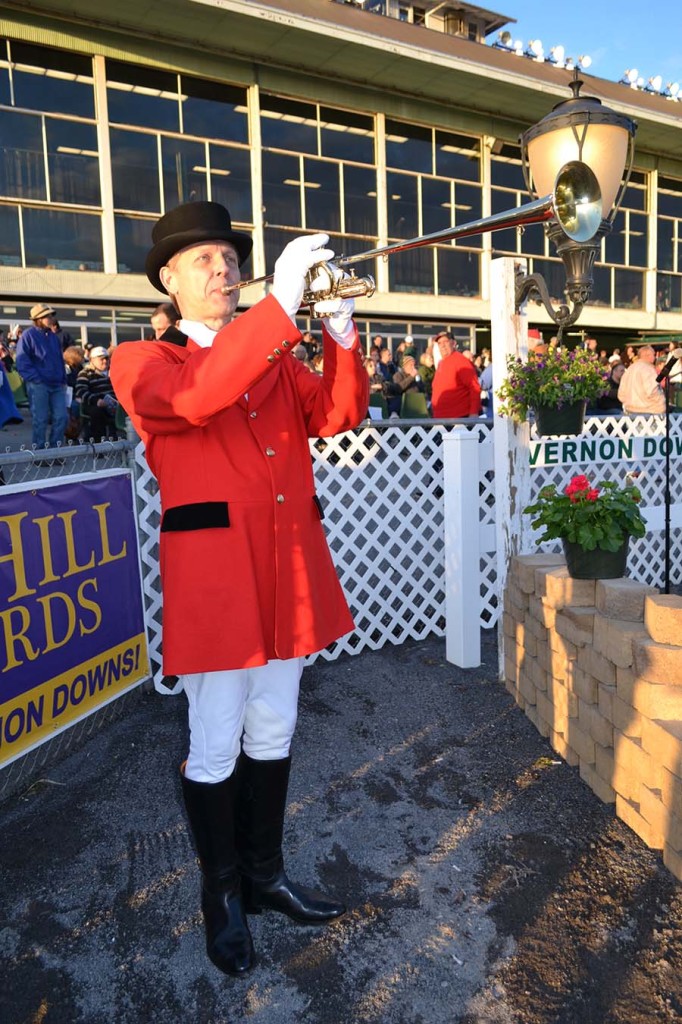 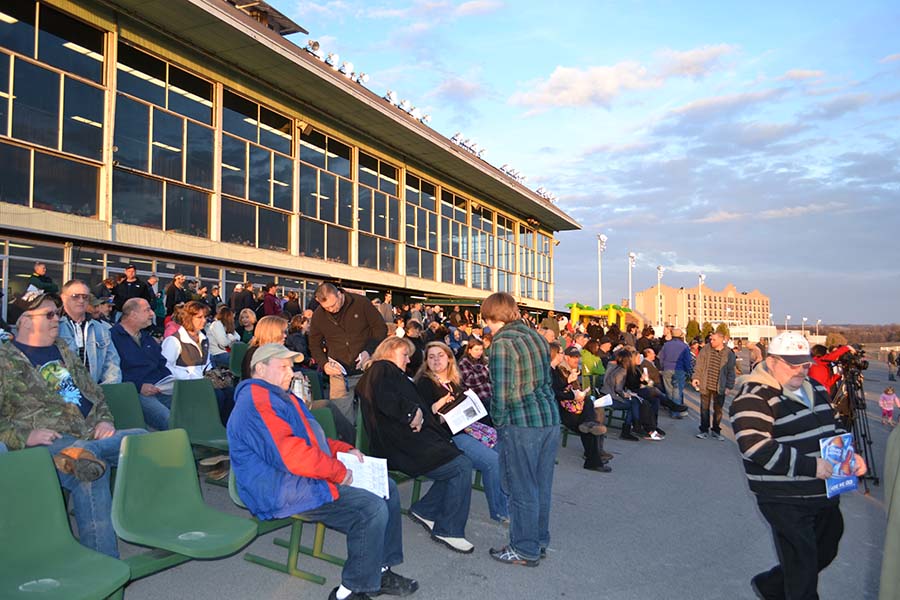 Railbirds of all ages get ready for the action. Photo: Bill DeLapp | Syracuse New Times 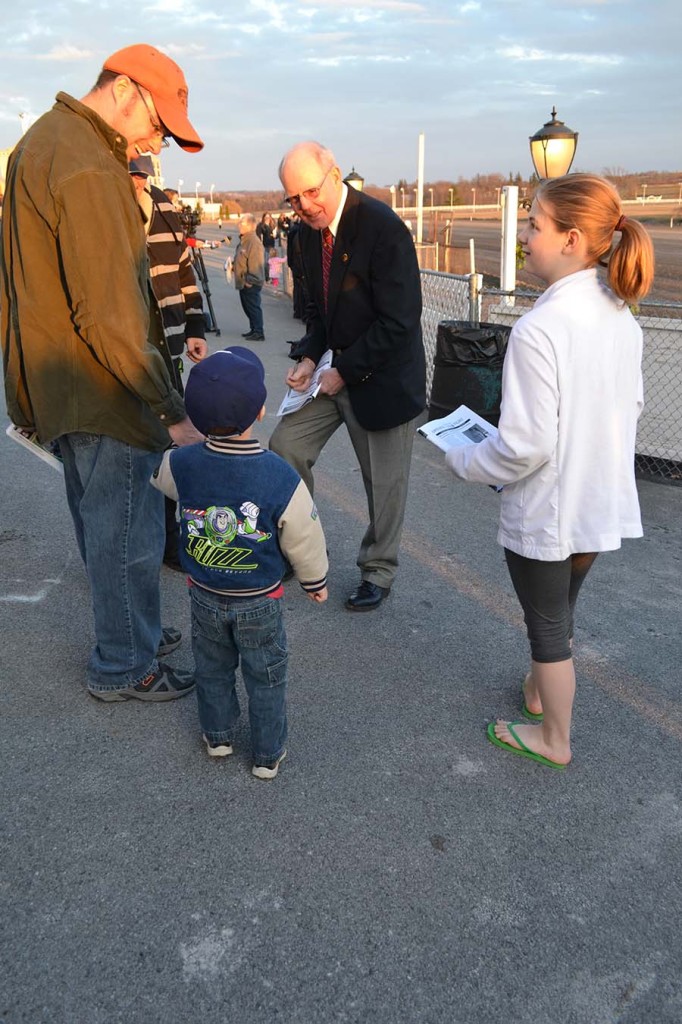