Last week, the Syracuse University athletic department announced that it’s creating a ’Cuse Fan Council comprised of season-ticket holders who will weigh in on “topics that directly relate to the fan experience, ticket sales and other subjects relating to our intercollegiate athletic events.”

While the council members will discuss all sports, it’s likely they’ll zero in on football as attendance for home games at the Carrier Dome continues to plummet. The Atlantic Coast Conference game on Saturday, Oct. 24, against Pittsburgh — a top-25 team and former Big East Conference rival on homecoming weekend — attracted only 29,832 fans.

That’s the third under-30,000 crowd in five home games this season. Before this year, the Orange hadn’t had an announced crowd of less than 30,000 at the Carrier Dome since 2008 during the ill-fated Greg Robinson era.

It’s refreshing to see that SU is soliciting fans’ opinions and it’ll help when they’re talking about things such as parking, concession prices and Kiss Cams. But in the end, there’s only one idea that’s really going to fill up the seats: winning football games.

And now the Orange is getting into the meat of its schedule with road games at No. 15 Florida State and Louisville, and the next home game against No. 6 Clemson on Nov. 14. To become eligible for a bowl game, the Orange will have to win one of those three games and beat North Carolina State and Boston College in its final two games.

“It really is just tough, the last four weeks,” said sophomore linebacker Zaire Franklin, who had a monster game against Pitt with 11 tackles, two sacks and one forced fumble. “Being in position to win a game, but not being able to find that play. I feel like we’re close. The game is always there. The game is always in reach. We just have to learn to win these types of games.”

Win them, and the fans will come. It’s really that simple, and the proof is right in our own backyard.

Remember when the LSU football team came to town last month with 8,000 fans who promised to drink our town dry? We made a big deal out of those fans traveling 1,200 miles and spending three days in Syracuse tailgating like it’s 1999.

But imagine what most college basketball fans around the country think of us. We draw 20,000 for the worst teams, and fill seats 1 ½ miles away from the court for the biggest games. We park a zip code away, walk uphill in snow and ice, and brave frigid temperatures to watch a two-hour basketball game.

Because of Orange fans, SU games at Madison Square Garden are like home games. Georgetown even stopped selling individual game tickets for the SU game in 2011 because it irked alumni to have so many Orange fans in the arena.

The reason LSU football fans and SU basketball fans are so rabid is because we all prefer to be associated with a winner. (Duh!) If LSU hadn’t won national championships in 2003 and 2007, perhaps their fans wouldn’t have been so eager to travel to Syracuse. And if the Orange basketball team wasn’t a perennial powerhouse with its own national title in 2003 and a realistic opportunity to win one just about every year, Georgetown wouldn’t have had to come up with its ticket-rigging scheme. 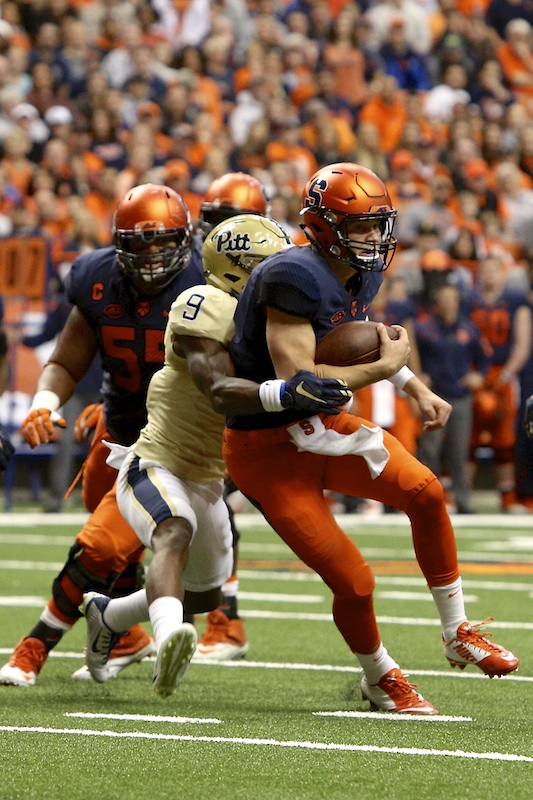 So, that said, let’s get back to Orange football. There is hope. Most of SU’s starters are underclassmen, and true freshmen like quarterback Eric Dungey and running back Jordan Fredericks have accounted for the majority of the team’s total offense. On the defensive side, more than half of the starters this year have been freshmen or sophomores.

“They’re learning so much, so many of them are playing substantial time in college football for the first time,” SU coach Scott Shafer said. “There’s so many great learning opportunities. You have to try to accentuate the positives, work on the things that weren’t good enough and keep a level head about you as you move forward.”

Shafer recruited all of those young players after inheriting the job from former coach Doug Marrone, who left his “dream job” at SU for the NFL. New athletic director Mark Coyle will have to determine if he believes that Shafer and his staff can mold that talent into a team that’s capable of becoming a consistent winner.

Win consistently and the fans will start to come. And by win consistently, that means beating teams other than Villanova, Rhode Island, Wake Forest and Central Michigan — the four teams that have provided SU with its six wins the last two seasons.

“I can see if we were losing every game by two touchdowns. It’s not like we’re being outplayed and we’re not talented,” Franklin said. “We just have to be able to find that play when we need it the most. We just have to keep pushing, in practice, in the way we train and prepare. Just be able to get that one play that decides between winner and loser.”